‘Wizz Air cancelled my flight – no support to get me home’: Flyer’s fury at Hungarian airline

A British holidaymaker has vowed never to use Wizz Air again after the airline cancelled her flight from Portugal to London with just eight hours’ notice – and was unable to help with rebooking an alternative flight or finding hotel accommodation.

The passenger, Alicia Fellowes, was due to fly from Lisbon to London Luton with her boyfriend, Oliver, on Sunday, June 26, at 10pm – flight W9 4494 – but received a text message at 2pm informing her that the flight was cancelled, along with a link for a refund or ‘Wizz Credit’ that didn’t work.

The pair needed to return for work commitments the following day – but the next Wizz Air flight was four days later. As a result, they were forced to spend nearly £700 on a flight to Manchester with Air Portugal that landed that evening and £144 on an airport hotel. Alicia spent £33 on a train to London the following day, while Oliver paid £154 for a flight from Manchester to Inverness instead of from Luton as planned.

Holidaymaker Alicia Fellowes has revealed how her flight from Lisbon Airport (above) with Wizz Air was cancelled on the day – and says the airline offered no support to get her back to London. She was forced to fly with her boyfriend to Manchester with Air Portugal and catch a train to the capital from there

Alicia, 25, summed up the experience to MailOnline Travel as ‘horrendous’.

When a flight is cancelled within 14 days of departure, the airline the passenger booked with is legally obliged to get them home and must offer free phone calls and accommodation.

Alicia revealed that none of this was forthcoming – and in fact spent over 50 minutes on the phone to Wizz Air while at Lisbon Airport at a cost of £1.50 per minute.

The Budapest-based airline has a ‘live chat’ service, but Alicia said that didn’t work.

She said: ‘We were given no explanation as to why the flight was cancelled or any support following the cancellation – there were no Wizz Air ground staff at Lisbon Airport and no guidance offered as to how best to get home. We were offered no financial support to book another flight.

‘At the airport we were told to go to a help desk where an agent could speak to us on behalf of the airline. However, the agent made it very clear that as they didn’t work for the airline there was very little they could do. They gave us a Wizz Air cancellation form that highlights the compensation you are entitled to.

‘They also told us the next flight wasn’t for four days so suggested we either find a hotel for the next four days in Lisbon – they couldn’t book this for us and offer us spending money for the four days so that would have to be an additional cost – and then fly home, or call the Wizz Air helpline to see if they would cover another flight home with another airline.’

After three denied calls by Wizz Air, having been on hold for over 15 minutes in total, she got through to an operator ‘who seemed very unsure what Wizz Air could offer in terms of compensation’.

Alicia continued: ‘I mentioned that we had found a flight to Manchester and asked if the airline would book the flight for us or cover the cost. She said she thought they would cover that along with transport back to London but couldn’t book it themselves and said it would be unlikely that the airline would cover the cost of an airport hotel, even though we had to stay in Manchester as the flight landed so late.

‘I informed her of the significant costs of the flight, and she said it should be fine as long as we weren’t flying premium economy or above. 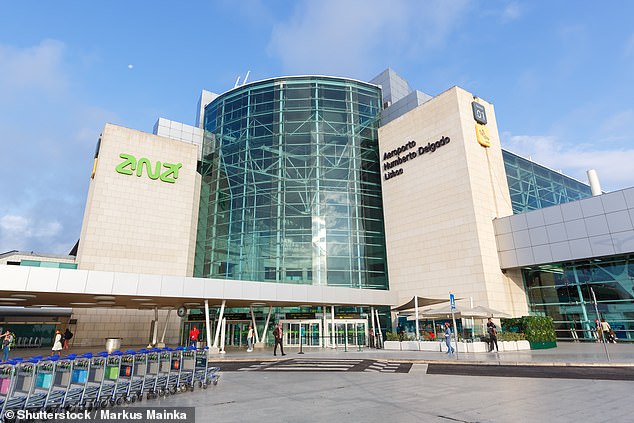 Alicia revealed that she spent over 50 minutes on the phone to Wizz Air while at Lisbon Airport (above) at a cost of £1.50 per minute

‘I felt positive at this point, but then she started to backtrack, saying she couldn’t send us an email confirmation confirming approval of these expenses directly and said we would just have to submit a claim and hope.’

At this point, Alicia and Oliver booked the flight to Manchester and then decided to call Wizz Air again ‘to see if someone could confirm a refund/expenses via email’.

‘I really started to feel anxious about the money we spent,’ said Alicia, ‘and this woman was even less reassuring, saying she would hope the airline would give me a refund, but couldn’t promise anything.’

These calls, including being kept on hold, lasted around an hour. And when Alicia discovered they cost £1.50 a minute, she decided to avoid using the helpline.

Wizz Air has since refunded Alicia and Oliver £119, but that still leaves them nearly £1,000 out of pocket.

Alicia, who lives in London, added: ‘We feel scammed and very angry at how badly they could treat paying customers. I will never ever use them again and have told others not to use them either.’ 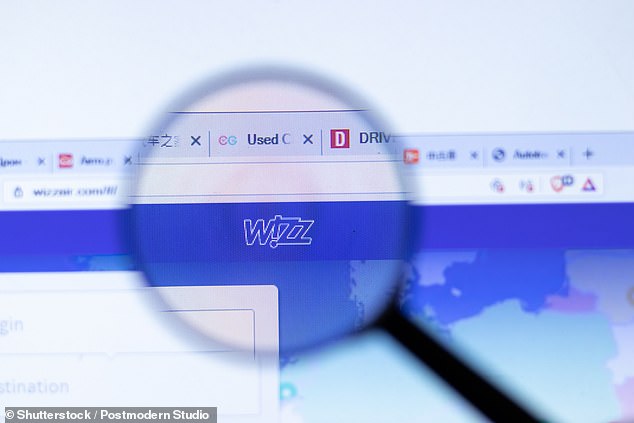 Alicia, who lives in London, said: ‘We feel scammed and very angry at how badly [Wizz Air] could treat paying customers’

Unfortunately, her experience with Wizz Air will be all too familiar for some.

Dozens have taken to Twitter and Tripadvisor to complain about the airline cancelling flights, then leaving them stranded.

And MailOnline Travel heard from Wizz Air passenger Fenella Barrons, who claims that she has been left over £1,000 out of pocket after the airline overbooked a flight to Montenegro and cancelled the return service.

The 25-year-old said: ‘On May 29, 2022, my five friends and I travelled to Gatwick Airport for a Wizz Air flight to Montenegro. Although we had attempted check in the night prior, upon arrival one friend and I were told they had overbooked the flight and we would be “lucky to get on the flight”.

‘It turned out we were not “lucky” and we were denied boarding after two hours of waiting for the delayed flight.

‘We therefore had to rebook a flight for the following day from Heathrow, arriving at our destination over 24 hours later. This cost us over £400.

‘On Saturday, June 4, when we thought it couldn’t get any worse, it was time to fly home with Wizz Air. Wizz Air sent us an email two hours before check-in time saying the flight was cancelled. Following this, I received no correspondence or advice from Wizz Air to help with the situation I found myself in and felt completely abandoned in a foreign country.

‘No advice was given on the availability of alternative travel options, when the next Wizz Air flight might be, or any useful information to help me through this stressful situation.

‘Given we had to get back for work on the Monday, we took it upon ourselves to book flights to Paris, which then resulted in us getting a train across France and an overnight ferry from France to Portsmouth. Again, this cost us roughly £400 each. 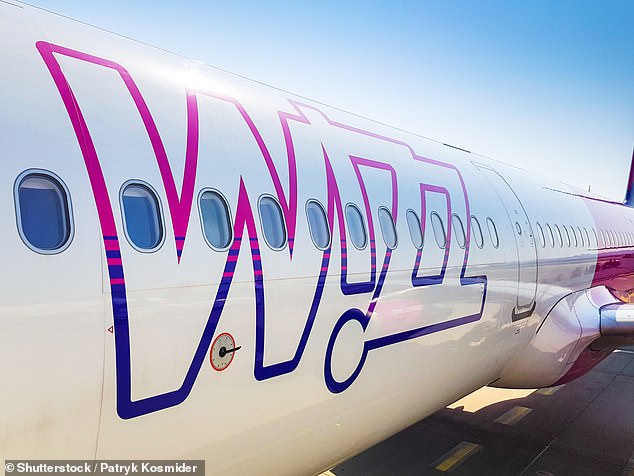 Dozens have taken to Twitter and Tripadvisor to complain about Wizz Air cancelling flights, then leaving them stranded

‘Since then, we have constantly been trying to get hold of Wizz Air for the compensation we are due. I have personally had no response from the company. My friend has had a response denying the claim, saying she is due only 70 euros for the inconvenience when we are both over £1,000 out of pocket. This has caused me a huge amount of stress and anxiety. I have had to take time off work to deal with the stress it has caused me and I am now living cautiously with little to no spare cash.’

When a flight is cancelled within 14 days of departure, passengers are entitled to at least £220 compensation, depending on the length of the flight. Importantly, the airline you booked with is legally obliged to get you home

Rory Boland, Which? Travel Editor, clarified what passengers who experience flight cancellations should expect in terms of support.

He told MailOnline Travel: ‘When a flight is cancelled within 14 days of departure, passengers are entitled to at least £220 compensation, depending on the length of the flight. Importantly, the airline you booked with is legally obliged to get you home, using other carriers if necessary. Be wary of accepting a refund, as once you do so, the airline has no legal duty of care to you.

‘If you are left with no choice other than to pay for flights, accommodation or food from your own pocket then you should keep receipts and claim them back from the airline. It’s important to remember that expenses must be deemed “reasonable” to qualify for reimbursement.

‘When a flight is cancelled or delayed due to an extraordinary circumstance, your airline is not obliged to offer compensation. However, if you choose to be rerouted they must still offer assistance in the form of two free phone calls, faxes or emails, free meals and refreshments appropriate to the delay, and free accommodation and hotel transfers if an overnight stay is required, as it was in Alicia’s case.

‘Extraordinary circumstances apply to events which are outside the airline’s control. While operational issues at the airport could be classified as an extraordinary circumstance, you are entitled to appeal their decision and apply for compensation if you disagree with the reason given. If they reject the claim, they must provide clear evidence of the reason for the cancellation.

‘If at this point you are still dissatisfied with the airline’s decision, you can register your complaint with an alternative dispute resolution scheme – the Civil Aviation Authority holds a list of approved providers and which airlines they cover. You also have the right to take an airline to the small claims court if you feel it is unfairly refusing to pay you compensation. If you decide to take this route, it is recommended to seek legal advice.’

MailOnline Travel has asked Wizz Air for a comment, but none has so far been forthcoming.