Katelin Wojtowicz, 25, was charged on Wednesday last week with grand theft, linked to three different cases where she is believed to have taken dates back to a hotel and robbed them while they slept

A Florida woman has been accused of stealing more than $131,000 worth of luxury watches and cash from men she met at clubs and took back to their Miami hotel rooms.

In each case she has been accused of taking dates back to their hotel room at the end of a night partying and waiting till they have fallen asleep.

Once the men were asleep, the 25-year-old allegedly struck, taking off their watches and making away with huge amounts of cash and other goods.

In the first case, detailed in court documents given to 7 News Miami, Wojtowicz was believed to have met a man at the Mokai Lounge, in Miami Beach.

On the date, in May 2018, they drank a couple of drinks before going back to the Fountainebleu Hotel.

After meeting up with the 25-year-old at the same bar as the first alleged victim the tourist took her back to his room at the 1 Hotel.

When he went to sleep his $56,000 watch was still on his wrist. When he woke up it was gone and so was his blonde date.

In the third case the court documents detailed how Wojotwicz went up to another man at the Mondrian Hotel bar in January this year.

She began flirting with him and the couple eventually went back to the man’s room. He remembers putting some high-end jewelry in a safe and sensed his date standing behind him .

That was his last memory of the fateful evening.

‘After placing the items in the safe, the victim has no recollection of the remainder of the night,’ the arrest report detailed.

The Florida woman has been released from jail on a $22,500 bond. She is expected to appear at Miami-Dade County court on December 19 for an arraignment hearing. 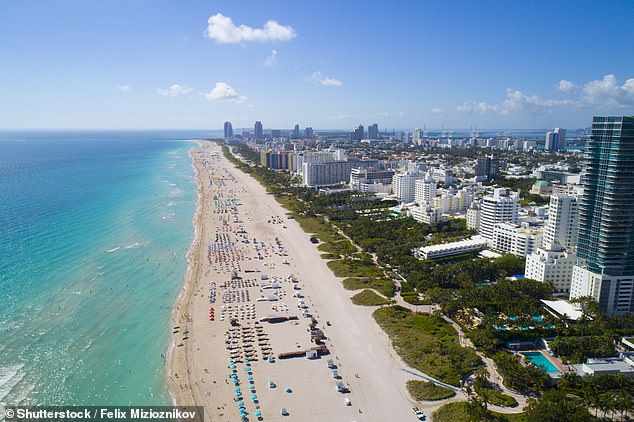 This is not the first time the 25-year-old has faced charges related to the theft of high-end jewelry from men she has dated.

Wojtowicz, only 22 at the time, was said to have met the victim in the casino at the Hard Rock Hotel in Miami. The man, who has not been named, reportedly paid her $700 before going to sleep and later waking up with his watch gone.

She was arrested a week later, at the same hotel after another intended victim found her going through his wallet in the bathroom of his room.

He launched at her, and Wojtowicz pulled a pink taser in defense. The would-be victim managed to grab the taser and break it, as the 22-year-old fled.

She was later spotted fleeing the hotel on CCTV camera. She pleaded not guilty and the case into her spate of alleged crimes in 2017 is ongoing.