A day-old baby boy has been dumped on the doorstep of an apartment in Florida with a note indicating the child’s mom may be in danger.

Neighbors heard the unidentified baby crying around 10am Saturday outside the Willow Key Apartments home of Clive Petgrave, located in the 5500 block of Arnold Palmer Drive in Orlando, Florida.

Orlando Police were called and took the baby to Arnold Palmer Hospital for Children for treatment.

Officers also knocked on Petgrave’s door not long after the child was heard and asked him if he was knew there was a newborn on his doorstep.

‘(My neighbor) said she was in the kitchen, making breakfast and she heard a baby crying,’ Petgrave told WFTV. ‘She said to herself “there should be no baby on this floor crying like that.” And when she opened the door, she saw a baby.’ 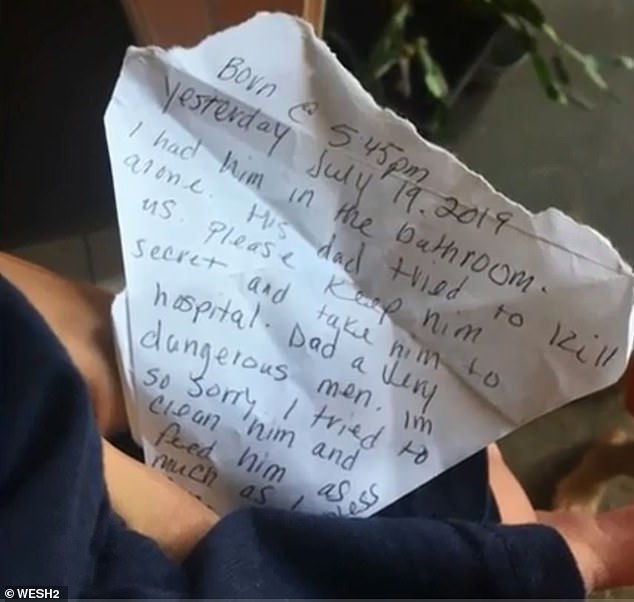 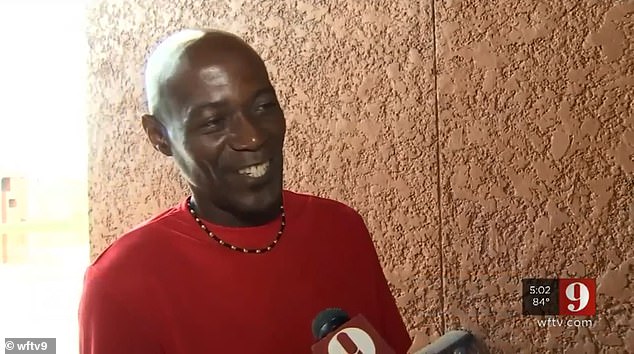 Police said the child was said to be in good health at the hospital, but he could have died on Brown’s stoop if neighbors hadn’t found him.

A photo of the note left with the baby by someone who appears to be the child’s mother was obtained by WFTV. In it, the mother described a dangerous domestic violence situation involving the baby’s father.

‘Born at 5.45pm yesterday, July 19, 2019. I had him in the bathroom alone. His dad tried to kill us. Please keep him secret and take him to a hospital. Dad a very dangerous man. I’m so sorry. I tried to feed him and clean him as much as I could,’ the note read.

Althea Brown, who lives in the same complex, was on her way to work that morning when a neighbor called her and told her there was a baby wrapped in a t-shirt outside her front door. 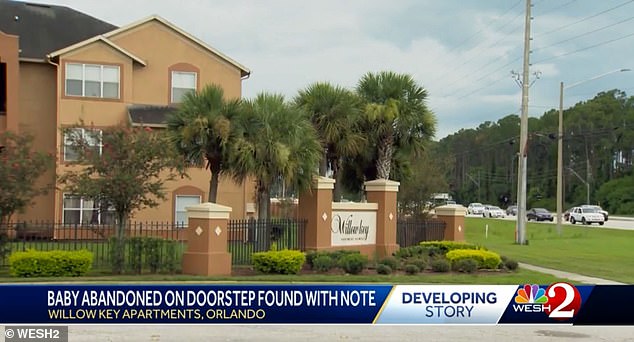 Neighbors heard the unidentified baby crying around 10am Saturday outside an apartment in the Willow Key Apartments complex in Orlando, Florida

‘When I heard it, I wish I was there,’ Brown told Click Orlando. ‘Maybe I’d take that baby in. Not to adopt it, but to foster it or something… I don’t know if it’s a neighbor or not or if it was just somebody that decided to use this place as their escape. It’s incomprehensible to me.’

The newborn is the second baby in two years found abandoned at in apartment complex in Orlando, according to WFTV.

Police noted that Florida’s Save Haven law, which has been in effect for 19 years, makes it legal for people to drop off unwanted newborns at hospitals and fire stations if the babies are less than a week old.

But abandoning a baby at someone’s home is still illegal in the state.

‘About the only thing we’ll ask her is would she like medical care, are there any extenuating circumstances that we can be of help to her,” White told WFTV . ‘We don’t capture names, we don’t look at vehicles that perhaps they drove up in. Absolutely nothing is collected from them.’

It’s unclear if the baby’s mother will face charges if she is found.