A woman has revealed how her doctor ‘prescribed’ her orgasms to treat her depression.

Penny Sullivan – not her real name – had pulled her own hair out as a youngster, and suffered anorexia and bulimia.

After struggling with low moods, anxiety and anger for decades she was finally diagnosed with bipolar II disorder.

Then her doctor prescribed her medication, suggested she give up alcohol and get more exercise – all standard advice.

But he also prescribed sex – and ‘as much of it as she could handle’. According to Australian website whimn.com.au, Penny had a naturally high sex drive so ‘that was a lot’.

The mother-of-three followed doctor’s orders and was amazed to discover that regular intimacy with her husband helped stabilise her moods.

CATHERINE ZETA-JONES ON HER BIPOLAR 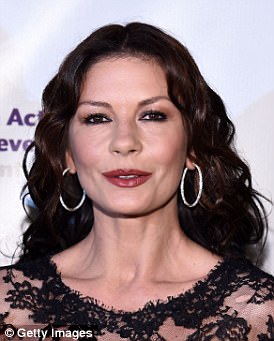 The Swansea native has spoken out about her mental health struggles

Catherine Zeta-Jones is one of the high profile celebrities whose struggles with bipolar has been well documented.

The 48-year-old went into rehab in 2013 after voluntarily checking herself in to get treatment after a turbulent time following her husband Michael Douglas being diagnosed with tongue cancer.

‘Bipolar is something I have been dealing with for a long time,’ she said, speaking with the Sunday Telegraph’s Stella magazine.

The Welsh star of Cabaret and Red 2 says when she got ‘sideswept ‘ by Douglas’ illness it was a trigger for her balance to go a bit off.

‘Not sleeping, worry, stress’ are just some of the symptoms she recalls suffering.

‘We don’t always have to have intercourse either, simply touching, cuddling or just fooling around and being connected can be just as great to get those feel goods,’ she said.

Bipolar disorder, formerly known as manic depression, is a condition that affects your moods, which can swing from one extreme to another.

Sufferers have periods or depression when they may feel very low and lethargic then episodes of mania – feeling very high and overactive.

It has been found to releases a range of hormones that enable us to relax, helping to lower our levels of the so-called ‘stress hormone’ cortisol, according to sexologist Isiah McKimmie from Sydney, Australia.

‘Sex elevates our mood through the release of hormones and endorphins it causes in our brain,’ she told whimn.com.

‘It increases oxytocin (a love and bonding hormone,) serotonin (a happiness hormone) and dopamine levels. These help us experience feelings of love, connection and happiness.

‘Additionally, semen contains mild anti-depressant compounds. Women who have unprotected sex with their partners have been shown to have elevated moods compared to women who always or mostly use condoms.’

Physically, regular sex life has been shown in studies to lower blood pressure and reduce our risk of heart attack.

A 2010 study published in the American Journal of Cardiology revealed that frequent love making had a protective effect on the male heart.

Researchers discovered that men who slept with their partner at least twice a week were up to 45 per cent less likely to suffer from the condition.

Unfortunately, sexual dysfunction is a known side-effect of serotonin reuptake inhibitors (SSRI) antidepressants, which include Prozac, Seroxat, Cipramil and Lustral.

Symptoms can include erectile dysfunction, inability to orgasm in women and genital numbness.

Around five million people in the UK take SSRIs, and 58 per cent of them could be experiencing these kinds of sexual side-effects, according to one authoritative study, published in the Journal of Clinical Psychiatry in 2001.

If you want to talk to someone confidentially, call the Samaritans, free of charge, on 116 123. You can talk to them 24 hours a day, 7 days a week. Alternatively, visit the Samaritans website or email jo@samaritans.org.

You may be told you have bipolar I if you have experienced:

You might also have experienced depressive episodes, although not everyone does.

You may be told you have bipolar II if you have experienced both:

You may be told you have cyclothymia if:

This can be a difficult diagnosis to receive, because you may feel that you are being told your symptoms are ‘not serious enough’. But in fact cyclothymia can have a serious impact on your life.