Young woman spills her go-to friendship group ‘rule’ that keeps them in line (and on time) when they go out for dinner: ‘This is genius’

A woman has revealed the rule her friendship group follows religiously to keep everyone in line when they go out.

Jess, from Brooklyn, said that every time one of her friends is late they owe the group money calculated by how many minutes late they are.

‘I’ve instated a new rule in my friendship group,’ she said in a video. ‘If you’re going to be late to an outing, that’s okay, but you need to put down the number of minutes you are late in cash.’

Jess [pictured], from Brooklyn, relayed that every time one of her friends is late they owe the group a fiscal equivalent to their tardiness

Jess divulged that this tactic has, indeed, ensured that everyone sticks to their word and avoids showing up late to events.

The woman also revealed that there was limit to the leniency involved.

‘If you’re twenty minutes late, you’re putting down $20 of the bill.’

Many were blown away by how simple – yet effective – Jess’s rule was.

‘I love this,’ said one woman. ‘Lateness is disrespectful, unless there is a legitimate reason and you communicate with me, then I’m fine.’

‘I have a chronically late friend, and we’ve started a rule for parties – that she needs to take a shot for every fifteen minutes she doesn’t show up.’

‘This makes complete sense – if you waste my life, I deserve to have money for it.’ 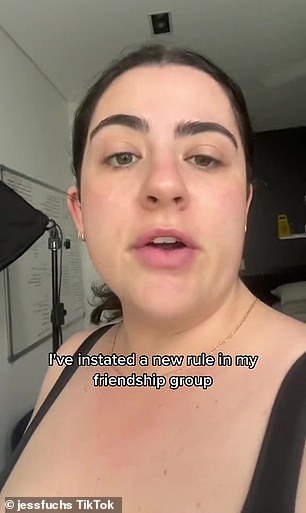 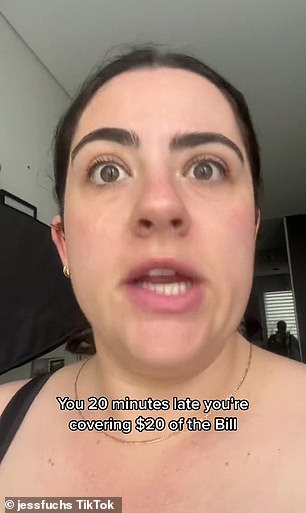 But some were offended by the ‘lack of grace’ and ‘toxic vibes’ displayed by Jess’s friend group.

‘This is not the way,’ said one woman. ‘I’d be too anxious and never agree to plans again.’

‘I don’t understand why you’re so obsessed with your friends, if you know someone is going to be late, you should be late too.’

‘This just feels like poor friend tax. People with money would not think twice at all.’

‘I’m always late and always poor, I would hate this. I would make new friends.’

‘I can’t believe people can be so toxic towards their friends.’