A woman who was shot nine times by her ex-husband before he killed their two children and turned the gun on himself in a shocking murder-suicide had her scars removed in an emotional new Netflix makeover show.

Katrina, from the US, explained how she was shot in her head, arms, legs and torso by her ex-husband in the attack in her home, leaving her with scars covering her body. She awoke in hospital to discover that he had murdered their two children while she lay on the floor, before taking his own life in front of her.

Appearing on the first episode of Netflix’s Skin Decision: Before And After, which launched in the UK on Wednesday, Katrina asked for help lessening the appearance of her scars and wanted a tattoo of her husband’s name removed. She said she did not want the physical reminder of the horror she had endured

Following corrective surgery, including a tummy tuck and laser resurfacing to remove layers of skin, Katrina revealed she feels ‘fixed’ and is now actively trying to get pregnant with a new long-term partner.

Twitter users were left in tears after watching the new eight-part series and took to their social media accounts to praise Katrina for her ‘inspiring’ courage.

Katrina (pictured), who was shot nine times by her ex-husband before he took their two children’s lives and his own has revealed she feels ‘human’ again after having her scars removed on a new makeover series 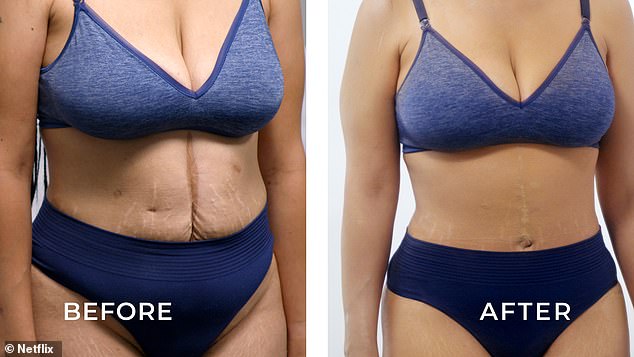 In the first episode of Netflix’s Skin Decision: Before And After, which launched in the UK on Wednesday, Katrina (pictured left, before her transformation, and right, after), from the US, asks plastic surgeon Dr Sheila Nazarian and beauty expert Nurse Jamie to help with her appearance

Speaking on the show, Katrina revealed: ‘On March 23rd, 2017, I was shot nine times. I was shot in my face, I was shot on every limb of my body, except for my right leg.’

Recalling the traumatic ordeal, she said: ‘I came home from work just as I normally do, and my ex-husband had a gun in his hand.

‘I heard a bang. And my husband walked upstairs and continued to shoot [at me]. He noticed me crawling toward the door and took his own life in front of me.’

Katrina later woke up in hospital and discovered that her former husband had also killed their two children.

‘My tragedy was the lowest point of my life. It changed my life in many ways,’ she explained. ‘I’m remember waking up in hospital. 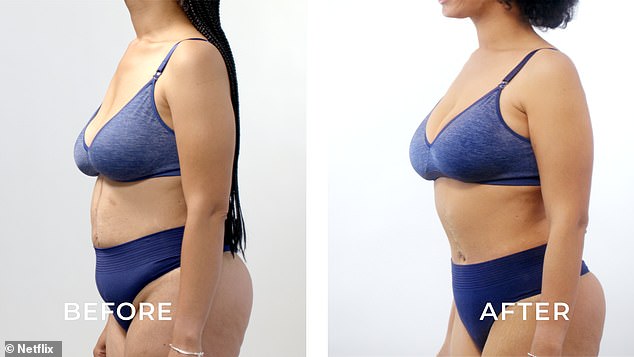 Katrina (pictured left, before her transformation, and right, after) admits that she no longer wants to be a physical manifestation of her trauma, with multiple scars covering part of her arms, legs, torso and stomach following the incident in 2017 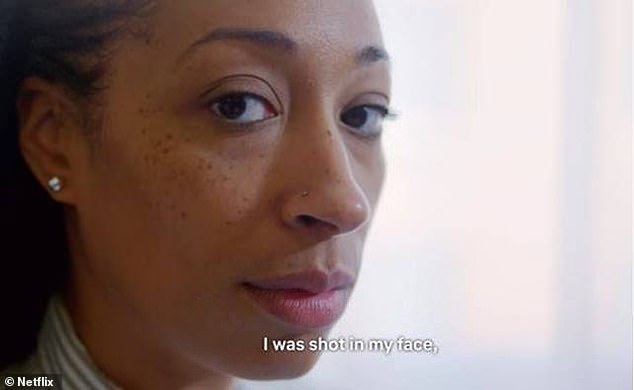 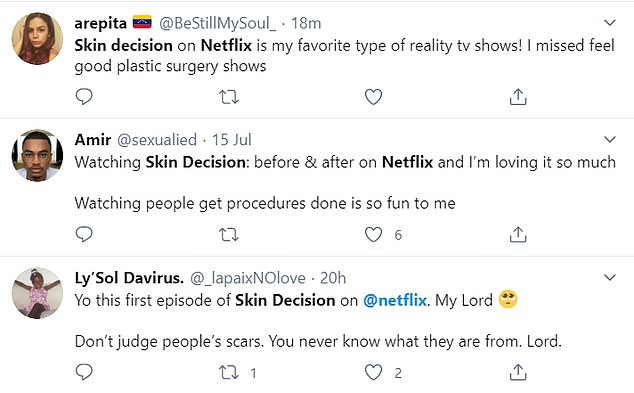 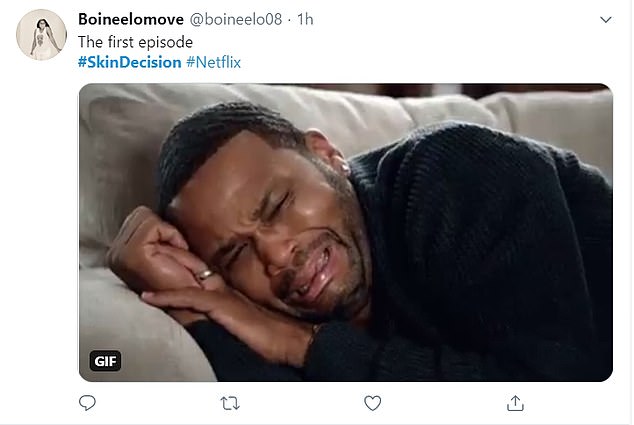 Reaction: Twitter users were left in tears after watching the new eight-part series and took to their social media accounts to praise Katrina for her ‘inspiring’ courage

‘I found out that when my ex-husband stopped shooting me, he took the lives of our children. I didn’t find out my children were dead until four or five days after I woke up. I had to plan my children’s funeral from a hospital bed.’

The grieving mother added: ‘When I look at these scars, that’s what I think of. I think of lies, betrayal, and hurt. Every day is a reminder of my children that aren’t alive anymore.’

Revealing that she no longer wants to have to tell her story after people notice her gun-shot markings, Katrina explained to the show’s cosmetic experts, plastic surgeon Dr Sheila Nazarian and beauty expert Nurse Jamie, that she wanted her scars removed.

Renowned skincare expert Jamie used micro-needling (which is the insertion of very fine short needles into the skin for the purposes of rejuvenation) and laser resurfacing to help heal Katrina. 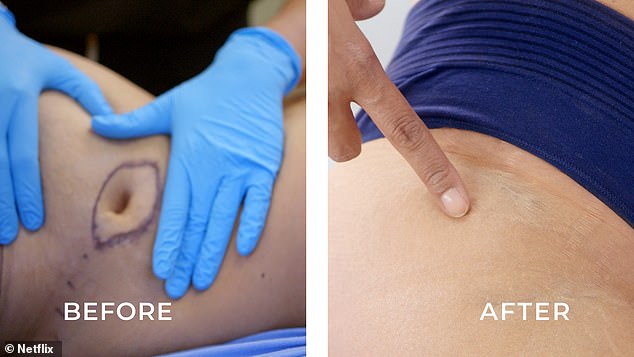 A bullet hole in Katrina’s side, pictured left, from when she was shot by her ex-husband before he took his own life. Pictured right: Katrina’s side after surgery

The tattoo of her husband’s name is also lazered off – leaving Katrina feeling ‘human’ once again.

‘I don’t see [my ex-husband] anymore,’ Katrina said at the transformation reveal. ‘I see me, I smile at me.

‘I felt deformed before my surgery and now I feel human. I’ve been covering myself for so long and I don’t have to anymore.’ 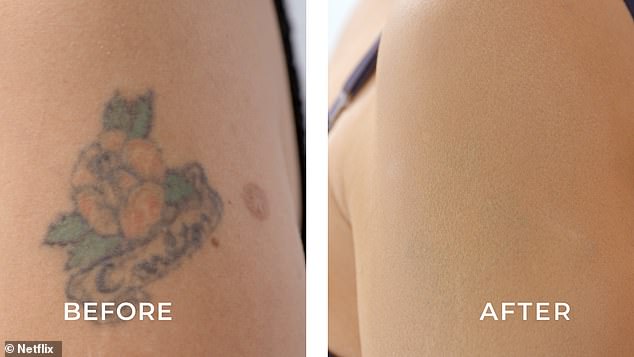 Katrina was also looking to remove the tattoo of her ex-husband’s name, seen left. Pictured right: Her arm after her laser removal procedure

She then joked: ‘I feel like I’m about to tell y’all the weather. It’s smoking hot in here. I can tell y’all that’

Katrina’s journey left Twitter users in tears, with one person writing: ‘The first 10 minutes of Skin Decision on Netflix has me balling… no one should have to go through that… NO ONE!’

Another added: ‘Katrina on Netflix ‘s Skin Decision. So happy she was given something she felt she needed to heal. Her story left me speechless.

A third said: ‘My plastic surgeon has a new show on Netflix now (Skin Decision), I’ve been watching for like 10 minutes and I’m already crying.’