A woman’s blood turned navy blue after she took an over-the-counter numbing medication for toothache.

The 25-year-old, from New York, had an adverse reaction to a topical pain reliever filled with benzocaine.

She developed methemoglobinemia, a disorder that sees iron in the blood change form and no longer bind to oxygen and carry it through the body.

The unnamed woman, of Long Island, had used almost the entire bottle of numbing agent before going to bed to soothe her toothache.

But when she woke the next morning she felt sick, weak and short of breath, so she went to A&E.

A 25-year-old woman’s blood turned navy blue after she took an over-the-counter numbing medication for toothache. She went to A&E when her nails and hands took on a blueish tinge 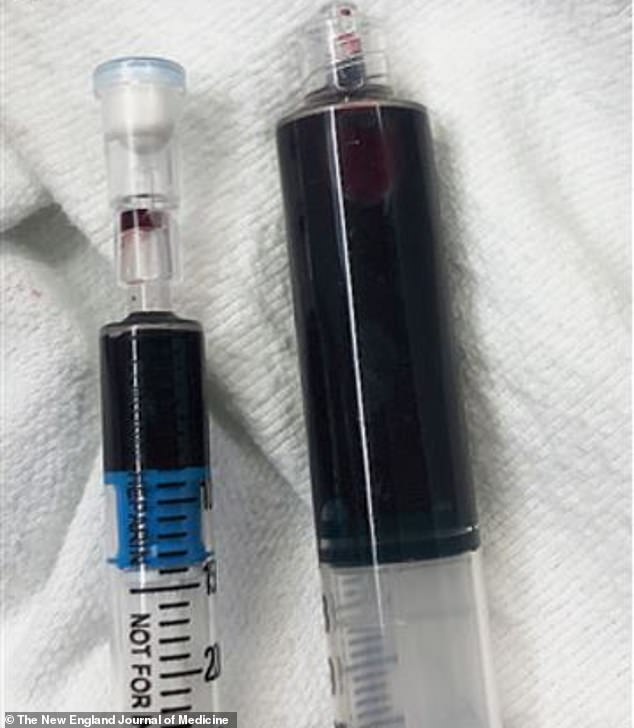 Her skin and nails had a blue tinge because her body was starved of oxygen, said medics who treated her.

Doctors were taken back when they drew blood from an artery and it took came out navy blue.

Tests revealed she had a blood oxygen level of just 67 per cent – a normal reading is typically between 95 and 100 per cent.

What is the disorder methemoglobinemia?

Methemoglobinemia is a blood condition in which an abnormal amount of methemoglobin is produced.

Hemoglobin is the protein in red blood cells that carries and distributes oxygen to the body.

Methemoglobin is a form of hemoglobin.

With methemoglobinemia, the hemoglobin can carry oxygen, but is not able to release it effectively to body tissues.

The disorder is sometimes passed down through families.

More commonly it occurs by exposure to certain medicines, chemicals, or foods, including:

– Anesthetics such as benzocaine

– Certain antibiotics (including dapsone and chloroquine)

– Nitrites (used as additives to prevent meat from spoiling)

The FDA said it had only come across 319 cases of methemoglobinemia caused by associated with benzocaine products, including three which resulted in death.

Medics at Miriam Hospital in Rhode Island revealed the tale in the New England Journal of Medicine.

Dr Otis Warren, an ER physician who treated the woman, recognised it was methemoglobinemia as he’d seen one case in the past.

He had treated a patient who developed the disorder after having an adverse reaction to an antibiotic.

‘The skin color looked exactly the same, you see it once, and it stays in your mind,’ Dr Warren told NBC News.

Doctors treated the patient with a drug known as methylene blue, which helps blood pump oxygen around the body.

The woman was given the drug intravenously, and within minutes reported feeling better.

She spent the night in the hospital before being sent home the next morning with a referral to a dentist.

Experts do not know exactly what causes methemoglobinemia, but they believe the condition is sometimes passed down from family members.

Although more commonly it occurs by exposure to certain medicines, chemicals, or foods.

Anesthetics such as benzocaine, certain antibiotics and Nitrites – used as additives to prevent meat from spoiling – are all known to cause the condition.

The FDA said it had only come across 319 cases of methemoglobinemia caused by associated with benzocaine, including three which resulted in death.

Anesthetics such as benzocaine, certain antibiotics and nitrites – often added to processed meats to keep them fresh – are known to cause the disorder.

Dr Otis Warren added: ‘People have no idea that something very specific and very dangerous can happen. It is not a mild side effect.’