Would YOU volunteer to test a vaccine for Ebola? Dental nurse was the first in the world to have it

Dental nurse Caroline Heath readily admits she’d never have considered taking part in a trial for a vaccine against the deadly Ebola virus if she hadn’t happened to be at a talk about coronavirus — and how the race to develop a vaccine for it was won.

The talk was part of Henley Literary Festival, last October, and the speaker Dame Sarah Gilbert, the scientist behind the Oxford AstraZeneca vaccine and author of the book, Vaxxers.

Dame Sarah explained that before Covid she’d been working on a vaccine for Ebola and that they now needed volunteers for this.

‘There was polite laughter from the audience, but that clocked in my head,’ says Caroline, 43, who lives near Reading, Berkshire.

‘A few weeks later, I got in touch with the trial organisers and went for my first meeting. It all started from there.’

Oxford University launched the first phase of its Ebola vaccine trials at the end of last year, with Caroline the first volunteer in the world to get the jab.

The vaccine is designed to tackle the Zaire and Sudan types of Ebola, which have caused nearly all outbreaks and deaths worldwide. A 2014 outbreak in West Africa killed 10,000 people.

Although researchers succeed in recruiting enough volunteers for most clinical trials, some — including those involving exotic, or dangerous, viruses or diseases such as Ebola that most Britons are unlikely to encounter — have, in the past, struggled.

But the publicity surrounding the global hunt for a Covid vaccine appears to have prompted a sea change in the public’s attitude — including greater involvement in trials.

‘The fact the AstraZeneca vaccine was developed here in the UK has definitely had a motivating effect,’ says Dr Daniel Jenkin, a senior clinical research fellow at The Jenner Institute in Oxford and lead investigator for the Ebola trial.

‘It’s helped people realise that even if it’s far away, the world does need these vaccines.’

One of the four species of Ebola virus that affect humans, the Zaire causes death in 70 to 90 per cent of cases if left untreated.

Vaccines do exist for the Zaire species but Oxford researchers hope the new jab will prove successful against both the Zaire and the Sudan variant, for which there is no vaccine. 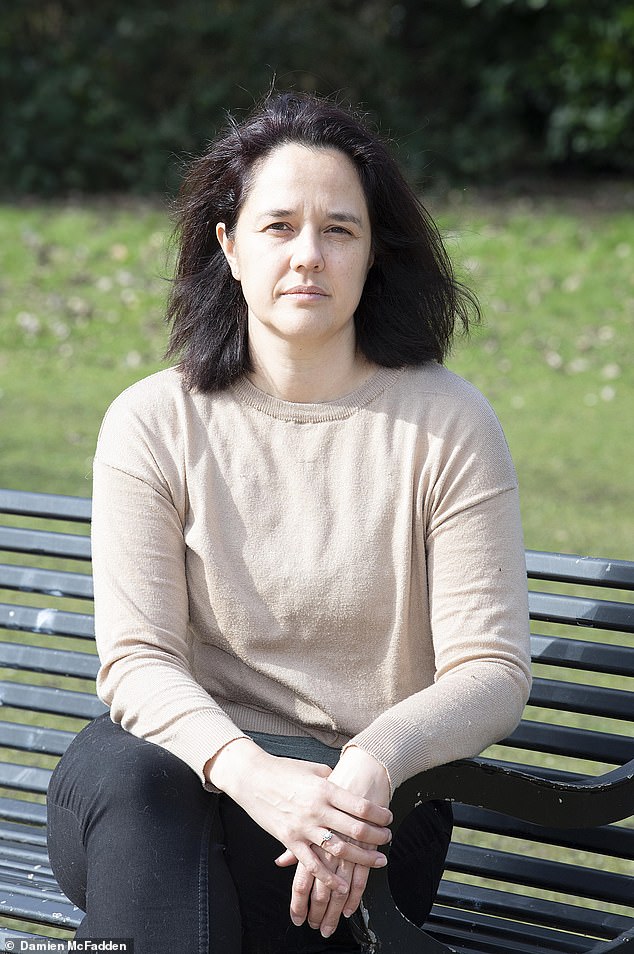 Dame Sarah explained that before Covid she’d been working on a vaccine for Ebola and that they now needed volunteers for this. ‘There was polite laughter from the audience, but that clocked in my head,’ says Caroline, 43, above, who lives near Reading, Berkshire. ‘A few weeks later, I got in touch with the trial organisers and went for my first meeting. It all started from there’

The new vaccine is based on a weakened version of a common cold virus that has been genetically modified so that it cannot replicate in humans. The trial volunteers will not get Ebola.

In this case, the participants will be monitored over six months to see whether they suffer any side-effects and whether they develop Ebola antibodies — with results expected later this year.

Caroline had never previously taken part in a vaccine or drug trial. Indeed, she admits she had had her doubts about the development of the Covid-19 jabs.

‘During the Covid era, when people were talking about vaccines coming out, I, naively, was one of those who was saying “How can they develop it so quickly?”

‘I am not a massively science-y person, but after reading the book by Professor Sarah Gilbert and listening to her talk, a lot of it made sense to me.

‘It consolidated the fact that they had actually been working on this vaccine for a long time; it wasn’t something they suddenly sat down and came up with.

‘That was reassuring — that the foundations for the Ebola vaccine were there with the work they had done for the Covid vaccine.’

Experts from a range of medical fields agree that the publicity surrounding the race to develop a Covid vaccine has produced a better level of public understanding about trial procedures.

‘Research has taken a place in our national psyche now, because it was in the national psyche every day during the height of the pandemic,’ says Aoife Regan, head of clinical research at Cancer Research UK.

The new vaccine is based on a weakened version of a common cold virus that has been genetically modified so that it cannot replicate in humans. The trial volunteers will not get Ebola

Dr Jenkin agrees. ‘I rarely have to explain what a phase one trial is now,’ he says — and this has translated into greater interest in signing up.

The recruitment for Oxford University’s recent Com-CoV trials into the effectiveness of different coronavirus vaccinations for first and booster jabs went so well in the early stages (which involved the over 50s in February to April 2021) that ‘we could have filled this programme with recruits ten times over,’ recalls Com-CoV trial lead investigator, Dr Matthew Snape, a professor of paediatrics and virology at Oxford University.

Dr Jenkin says people volunteer for a variety of motives. One might be to access experimental drugs and new treatments, which can be particularly appealing to patients for whom standard treatments have not proved successful. These can include some patients with hard-to-treat cancers such as pancreatic, oesophageal and brain cancer, for whom outcomes from standard care are poor.

In randomised later-stage trials there is no guarantee that a volunteer will receive the new drug, as they may get normal standard of care instead. Nonetheless, they may benefit from being treated in research hospitals, with regular check-ups and tests.

‘There is some evidence to suggest that patients treated as part of a clinical trial generally feel more positive and may even have better outcomes regardless of whether they received the trial drug,’ says Aoife Regan.

The reasons for this ‘trial effect’ aren’t clear but may include patients being more assiduous about taking their medication due to contact with the study team.

The trial recruited well in the early stages, Com-CoV and Com-CoV2, which involved the over 50s — enabling this age group, which was at greater risk of serious complications of coronavirus, to get jabs ahead of the NHS roll-out.

Yet Com-CoV3, which involved adolescents aged 12 to 15, was not overwhelmed in the same way, probably partly due to the fact this age group is less likely to become seriously ill with coronavirus, so their personal gain is less.

In any event, recruitment to the adolescent Com-CoV trial was halted early when it was announced this age group would be eligible for two doses of the Pfizer vaccine.

But Professor Snape says that the trial has nonetheless been able to attract enough volunteers to produce the necessary data, partly because ‘Covid has raised the profile of vaccine research and research in general’.

Another motivation for some is the financial compensation for taking part. Not all medical trials offer this, but the Ebola vaccine trial, for instance, offers £370 per patient to compensate for time spent and travel expenses.

Yet, post Covid, numerous Ebola volunteers have in fact turned down the offer of payment out of a sense of public duty — ‘the first time we’ve seen this’, says Dr Jenkin.

Caroline says her biggest motivation for taking part was ‘being able to help with a clinical trial’.

This sense of public service also motivated one of her fellow volunteers, 23-year-old Alice Yu, a postgraduate student studying international relations at Oxford University, who also took part in the Ebola trial, ‘partly out of altruistic motives and partly out of curiosity’.

Dr Jenkin says: ‘The biggest motivating factor we come across is, genuinely, people wanting to help us progress our research in vaccines.’

But while the pandemic may have helped recruit volunteers for trials, it had a hugely negative impact on trials in other ways.

Many of those for cancer treatments, for instance, were paused due to lack of medical staff (many were redeployed to support the Covid effort), and Aoife Regan estimates that, even now, the number of patients involved in all cancer trials across the Cancer Research UK portfolio is still only 70 per cent of what it was pre-pandemic.

‘And we certainly saw patients responding to “stay at home” messaging,’ she adds.

Above all, though, the pandemic has raised the profile of science.

‘As a nation, we are much more aware of medical research and the role that UK research has played through the pandemic —and that can only benefit us all in the future,’ says Aoife Regan.