Innovative fuel cells developed by scientists could be used to power up hybrid vehicles while they are moving, instead of petrol or diesel engines.

Fuel cells are not currently used in hybrid cars because they are expensive, but a new improved design means they last at least 10 times longer than current versions.

By increasing their durability – how long they last – scientists from the University of Waterloo in Canada hope to make newly designed fuel cells commercially viable.

In the future, the researchers hope it can be used to power engines alone, without the need for traditional or battery powered engines.

Innovative fuel cells could be used to power up hybrid vehicles while they are moving, instead of petrol or diesel engines. By increasing their durability, scientists hope to make newly designed  fuel cells (pictured in the hands of a researcher) commercially viable

Fuel cells produce their own electricity from a chemical reaction that combines hydrogen and oxygen, with water their only byproduct.

The latest advancements in zero-emission fuel cells could make them a new and permanent fixture in hybrid cars.

Electric hybrid vehicles currently use two power sources – a gas engines as well as a battery,  as the combination solves the issues of limited driving range and long charging times on batteries alone.

The role of the gas engines is to recharge the electric battery while the vehicles is in motion.

At low speeds, hybrid vehicles use pure electric power and can switch to petrol when speeds increase, with the combination generating lower emissions than the average petrol fuelled vehicle.

In theory, fuel cells should be able to replace those gas engines but they are currently not in use because they are too expensive.

Researchers made the advances by changing the way the fuel packs deliver energy to the battery packs.

By delivering a constant, rather than fluctuating amounts of electricity, the scientists showed observed reduced times spent switching between its on and off states.

As a result the fuel cells lasted between 4.9-11.8 times longer depending on the type of terrain the car was driven on.

The increased life-span of the cell means the cost of the fuel cells could be reduced, making them more economically viable. 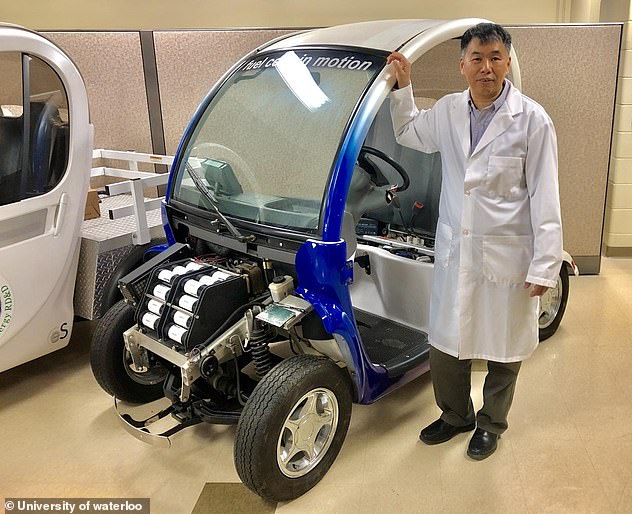 Scientists led by Professor Xianguo Li (pictured) have created fuel cells that last at least 10 times longer than current versions. Fuel cells produce their electricity from a chemical reaction that combines hydrogen and oxygen, with water their only byproduct

Professor Xianguo Li, director of the Fuel Cell and Green Energy Lab at Waterloo, said: ‘With our design approach, the cost could be comparable or even cheaper than gasoline engines,’ said’The future is very bright. This is clean energy that could boom.’

‘We have found a way to lower costs and still satisfy durability and performance expectations.

‘This is a good first step, a transition to what could be the answer to the internal combustion engine and the enormous environmental harm it does,’ Professor Li added.

Professor Li hopes  the introduction of fuel cells in hybrid vehicles will lead to mass production and lower unit costs.

According to the team, the technology may not be limited to hybrid cars as the team thinks it could pave the way for the replacement of both batteries and gas engines by providing an affordable, safe, dependable, clean source of electrical power.

The full report of the findings are published in the journal Applied Energy.

WHAT ARE HYBRID VEHICLES?