At the water’s edge, I’m clutching a golden grenade. At least, that’s what it looks like — but break it open and you’re rewarded with a medley of sweet, tangy flavours.

This is the fruit from a freshly plucked cacao pod on a pristine beach on Principe, the smallest of the islands off the west coast of Africa that make up the twin-island nation of São Tomé and Principe.

It’s Africa’s second-smallest country, with a population of fewer than 200,000.

In the early 20th century, most of the world’s chocolate came from here.

Sublime on the sands: São Tomé has a long and sweeping shoreline

I’m with my husband, Mark, and two children, aged six and three, staying at Roça Sundy, a small hotel that opened this year inside a recently restored roça (plantation) close to Yola beach. These roças are where cacao was grown and harvested when this was a Portuguese colony.

Since independence in 1975, most of them now lie abandoned, with nature creating ruins where I half-expect Indiana Jones to come running through.

A long, cobbled road leads to the grand, mountaintop house of Roça Sundy. Homemade cacao cream on buttered toast is served for breakfast on the terrace.

A long way to go with children? Well, yes, but relatively easy to reach by a 12-hour flight from London, changing at Lisbon.

São Tomé is peaceful, but nothing prepares us for how quiet Principe is.

Before the Portuguese discovered these islands in 1470, they were uninhabited. Slaves were then brought over from mainland Africa.

After many were later freed, the Portuguese bought in cheap contract labour from Angola and Cape Verde. Descendants of these workers still live in the senzalas, the rows of stone houses set back from the main house. 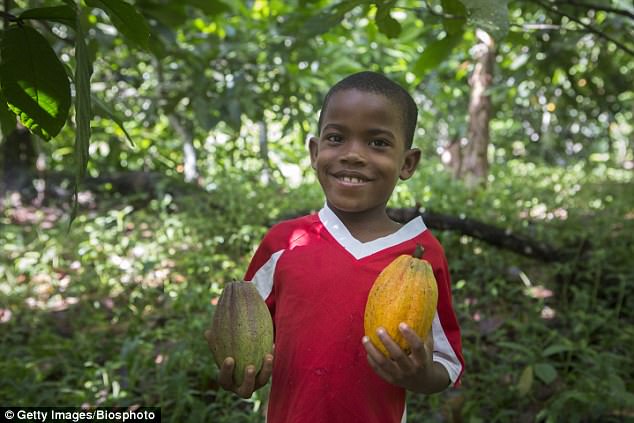 Cacao pods: A child pictured with two pods of cocoa, one ripe and one not

Our boys play football with the children on the grass in front, dodging chickens as they chase after the ball.

Roça Sundy is owned by the South African tech billionaire and astronaut Mark Shuttleworth, and his chef used to work at Heston Blumenthal’s Fat Duck, in Bray, Berkshire.

The nearby beach hotel Bom Bom, where we spend our second week, is also his, with a 300m walkway across turquoise sea to its island restaurant. In December, he opens Praia Sundy, Principe’s first five-star resort.

We go on boat trips, feeling like the first explorers as phonolitic rock towers shoot up from a Jurassic jungle, humpback whales breach and we snorkel among Guinean parrotfish.

Each day, we find another empty beach where we swim and our sons use coconut shells as buckets.

Part of the island was declared a Unesco biosphere reserve in 2012. One day, I head off early with our guide, Yodi, to scale the Pico de Principe mountain. Clambering up root staircases, Yodi points out a Principe sunbird. ‘These islands have the world’s largest concentration of endemic birds,’ he whispers.

Our last day is spent on São Tomé, home to Italian Claudio Corallo, who moved here to make chocolate, producing the island’s only bean-to-bar chocolate. In his factory in the island’s tiny capital, women are rolling candied ginger before coating it in chocolate: it’s some of the most distinctive I’ve ever tasted.

‘I’ve spent years learning how to make naturally bitter cacao taste sweet, without masking it with sugar,’ he says. I could be looking at Mr Wonka. This chocolate is like these islands: full of different flavours, unspoilt and a truly rare find.