All The Money In The World review: An absorbing film

It’s perfectly possible, even quite likely, that we will see better examples of film-making this year than Ridley Scott’s All The Money In The World. But I doubt we will ever see a better example of film remaking. Consider the extraordinary logistics.

Just two months ago, this dramatic retelling of the notorious kidnapping of John Paul Getty III was fully completed and ready for release. It was due to have its first public screening at the American Film Institute Festival in November, ahead of its official release in the United States at Christmas.

And then the sex-abuse scandal surrounding Kevin Spacey, who originally played the teenager’s grandfather, John Paul Getty I, broke and refused to go away.

Faced with the prospect of releasing a film that had hitherto been nursing serious hopes of awards but would now be inevitably tarnished by association, Scott and his co-producers took an extraordinary decision – to replace Spacey entirely.

The fine veteran actor Christopher Plummer would take on the role, complete ten days’ new filming at breakneck speed, the film would be re-edited… all without changing its release date. 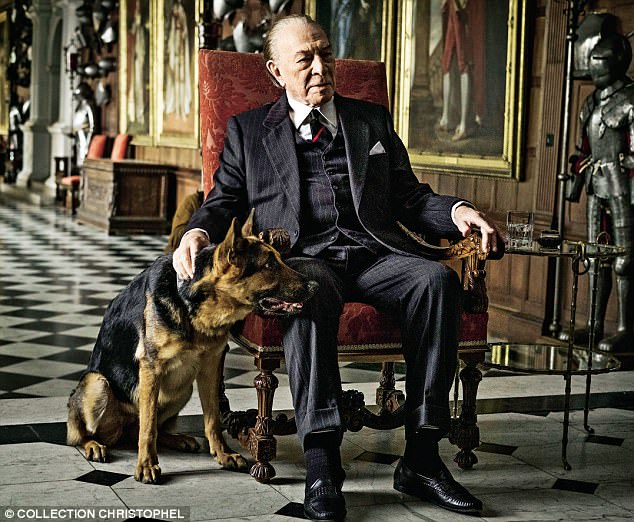 Christopher Plummer completed ten days’ new filming at breakneck speed. The film would be re-edited… all without changing its release date.

Even by the standards of a director who’d had to work out how to complete Gladiator when Oliver Reed died halfway through filming, it was an extraordinary and brave decision.

And boy has it paid off. Almost before he’d finished filming, Plummer had been nominated for a Golden Globe (we’ll find out whether he’s won tonight at the awards ceremony in Beverly Hills), and he dominates the film in a way that makes something of a mockery of his appearance in the Best Supporting Actor category.

That’s because, while the film is ostensibly about the kidnapping of his 16-year-old grandson (played here by Charlie Plummer, no relation) in Rome in 1973 and the desperate attempts to secure his release, it is the ageing and curmudgeonly Getty patriarch – a man who knows the price of everything and the value of nothing – who dominates the film, both on screen and off. 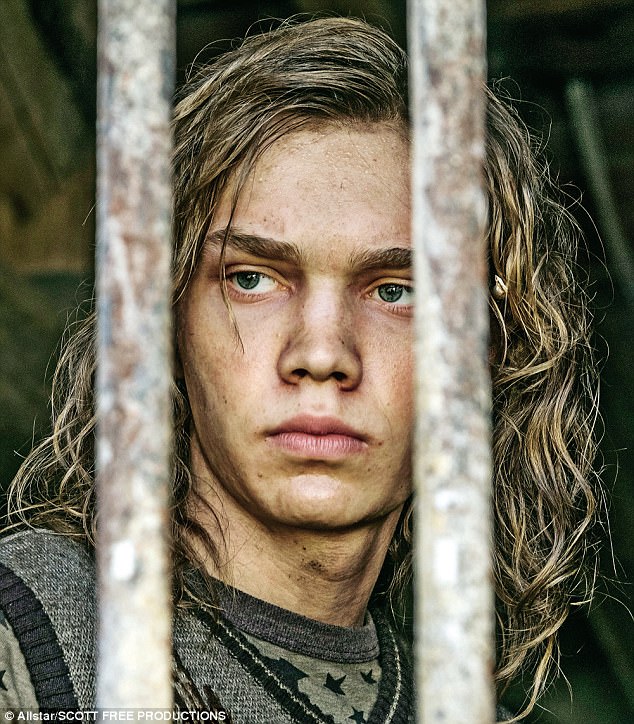 The film is ostensibly about the kidnapping of Getty Snr’s 16-year-old grandson (played here by Charlie Plummer, above) in Rome 1973 and the desperate attempts to secure his release.

At the time of the kidnapping, Getty Snr, who had made his billions initially in oil, wasn’t just the richest man in the world but, as David Scarpa’s screenplay puts it, the richest man who had ever lived.

But when the Calabrian gangsters who seized his grandson demand a $17 million ransom, he walks out to address the world’s press and calmly replies ‘no’, arguing that if he pays a ransom for one grandchild, all his other grandchildren will be kidnapped too.

To some extent he was ahead of his time, anticipating the ‘we do not negotiate with terrorists’ mantra that has now become the accepted norm, but here he’s portrayed as a cold-hearted and reclusive tyrant, a man slowly losing touch with reality, Citizen Kane- or Howard Hughes-style, at his well-guarded Surrey estate.

He believes he is the reincarnation of the Emperor Hadrian (his re-creation of an imperial Roman villa is now the Getty Villa in Malibu, California) and that despite having a billion dollars in the bank, he ‘has never been more financially vulnerable’. 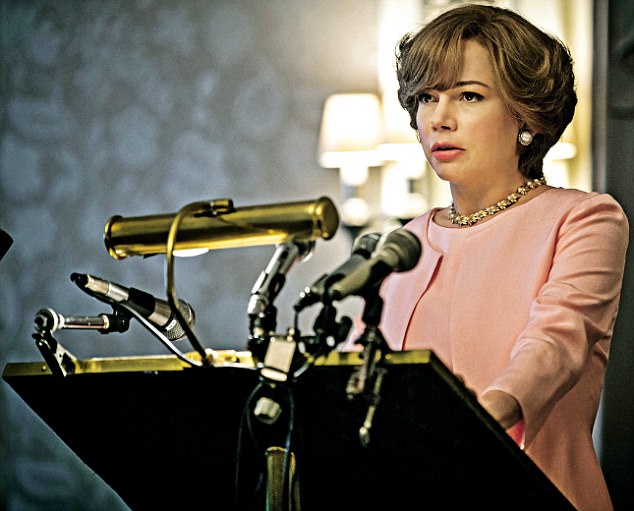 Michelle Williams is fabulous playing Gail (above), the kidnapped boy’s mother and just about the only person battling tirelessly for his release.

This is a man who genuinely believes he can’t afford to pay the ransom that might secure his grandson’s release.

It’s a gem of a part for Plummer and he seizes the unexpected opportunity with ruthless conviction. Michelle Williams is fabulous, too, playing Gail, the kidnapped boy’s mother and just about the only person battling tirelessly for his release.

But her ex-father-in-law won’t pay, the Italian police are incompetent and even the ex-CIA Getty Oil troubleshooter Fletcher Chase (played here by a refreshingly low-key Mark Wahlberg) is struggling to make progress. 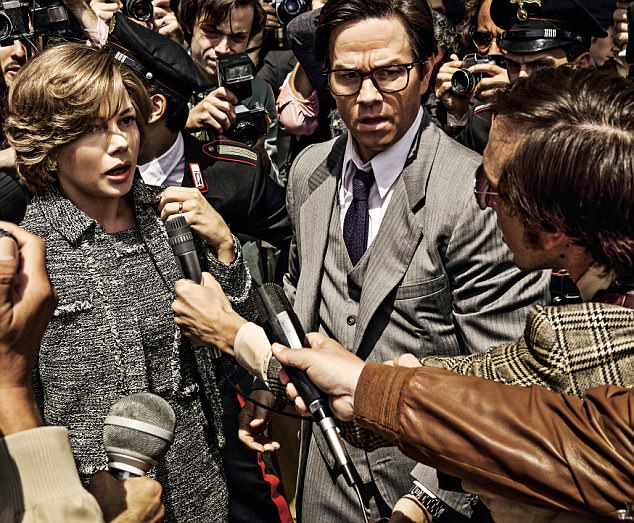 The Italian police are incompetent and even the ex-CIA Getty Oil troubleshooter Fletcher Chase (played here by a refreshingly low-key Mark Wahlberg, above) is struggling to make progress.

And yet Gail fights on with the character’s anger and aggression combining with the hair and wardrobe of the Sixties and Seventies to show us a side to Williams we definitely haven’t seen before.

Quite rightly, she’s also been nominated for a Golden Globe, along with Scott for Best Director.

Scott imparts a convincing sense of both period and place and generates suitable layers of menace. If the kidnapping is remembered for anything these days, it is for the young Getty’s captors’ brutal decision to cut off his ear and send it to an Italian newspaper as proof of life.

Like something from The Godfather, that scene is chillingly recreated here. 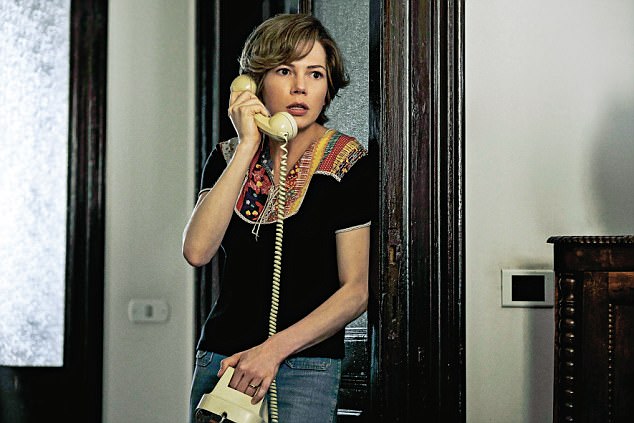 The overall result is an absorbing early offering in the new film year and one that does a good job of retelling a story that was huge news at the time but is now in danger of being forgotten.

John Paul Getty I also had a son, Timmy, who became blind from a brain tumour but Getty scolded his wife for spending money on treatment. He died aged 12.

But it does have its shortcomings – at more than 130 minutes, it feels a little long. What’s more, the narrative does jump, potentially confusingly, back and forward in time – both to the oil-rich Arabian peninsula of 1948 and to the San Francisco of 1964 when things first started to go wrong for Gail and her husband (John Paul Getty II), a man whose independent free spirit and addictive appetites had already distanced him from his relentlessly business-driven father.

But more importantly, as Scott and Scarpa admit more than once in the credits, this is a fictionalised version of a true story, and even a non-expert is left with the clear sense that events – and particularly the dénouement – really cannot have played out quite as neatly and dramatically as this.

By 1892, the American Civil War had been over for nearly 30 years and General Custer dead for 16 years. But the battle for control of the American West raged on. Tensions between the largely white incomers who claimed the land as their own and the Native Americans who had lived there for centuries remained murderously high.

So when, as the aptly named Hostiles gets under way, battle-hardened army captain Joseph Blocker (Christian Bale) is ordered to escort the dying Cheyenne leader Chief Yellow Hawk (Wes Studi) to his ancestral homelands in Montana, to say he is reluctant is an understatement.

Nevertheless, he rounds up a group of men he can trust and sets off. But when his escort party stumbles across the atrocity that so dramatically kick-starts the film, his already challenging journey is about to get a whole lot more complicated. 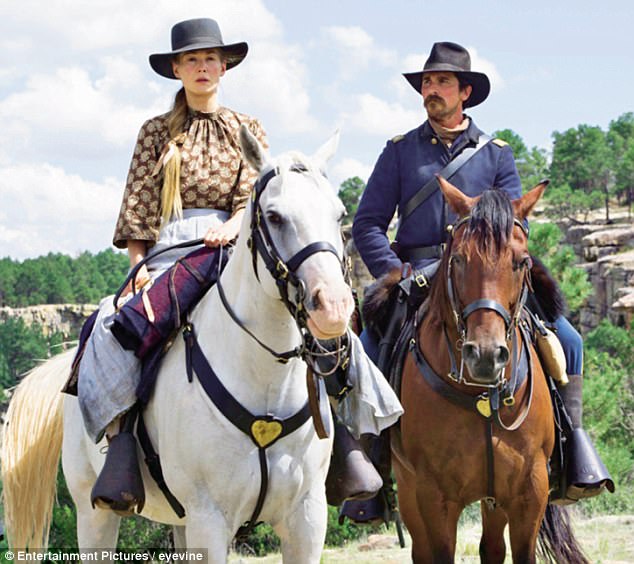 Christian Bale (above) is terrific as the battle-hardened army captain Joseph Blocker, however, the ever-photogenic Rosamund Pike (above) has minor grounds for complaint, reduced to looking pretty in an ‘Indian’ plait.

The only survivor is the beautiful Rosalie Quaid (Rosamund Pike), and she’s half-mad with grief and fear.

I love a good Western and this is certainly one – dark, violent but with delicious, faint hints of redemption, reconciliation and even romance coming somewhere along the way.

Bale is terrific and there’s good support from the likes of Jonathan Majors, Bill Camp and Studi.

Only the ever-photogenic Pike has minor grounds for complaint, reduced to looking pretty in an ‘Indian’ plait.

Brad’s Status occupies a very different but rapidly expanding genre: that of the male mid-life crisis. Ben Stiller plays the aforementioned Brad, a late-fortysomething who runs his own charity consultancy and is reasonably happily married.

But he is increasingly gripped by a sense of failure and underachievement. So a trip to Boston to help his 17-year-old son pick a university prompts a fresh bout of self-reproach and regret as he recalls his own college days and comes to terms with the fact that his musically gifted son might actually be cleverer than him. 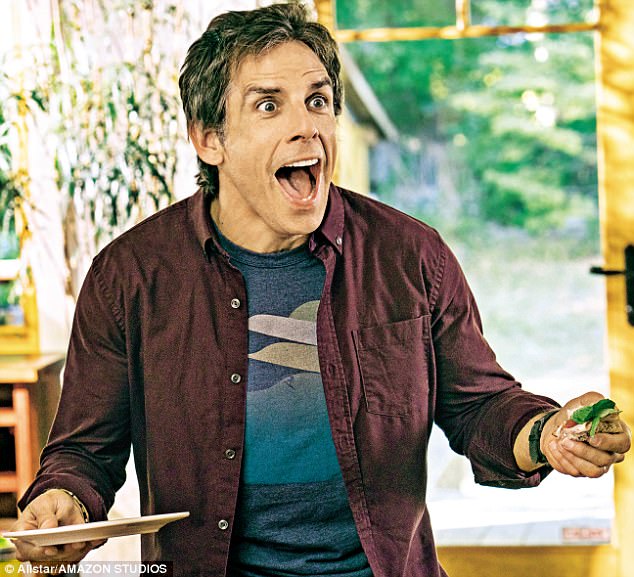 Ben Stiller (above) is good playing the aforementioned Brad, a late fortysomething who runs his own charity consultancy and is reasonably happily married.

Stiller is good and Austin Abrams excellent as his cool but regularly mortified son. But this is familiar territory, with the extended internal monologue bringing umpteen Woody Allen films to mind.

Painfully embarrassing at times, modestly amusing at others, it promises more than it delivers, let down by a surfeit of narration and by a growing sense that charmless Brad is very much the architect of his own perceived misfortune.