Cameron Munster has revealed that he has broken his booze ban following the conclusion of the 2022 season, and teased that his future could be at Wests Tigers.

Munster has been the subject of widespread speculation throughout the 2022 campaign, as moves closer to entering the final year on his contract with Melbourne.

Regardless of all the media talk, the 28-year-old has hit sublime form for Craig Bellamy’s side, and has credited an alcohol ban – given after Melbourne’s infamous white powder scandal –  as one key reason behind his excellent performances.

But ahead of Wednesday’s Dally M awards ceremony, Munster let slip that he has had a drink after the 12-month ban came to an end, admitting that he had a ‘couple of beers’ at a Storm awards ceremony.

‘I had a couple of beers last night at the player of the year awards but I’m most likely to go back to it [the ban] next year,’ he told Fletch and Hindy.

Munster also teased that he ‘wouldn’t mind orange and black’ amid speculation that the Tigers have made a late swoop to land the star for 2024. 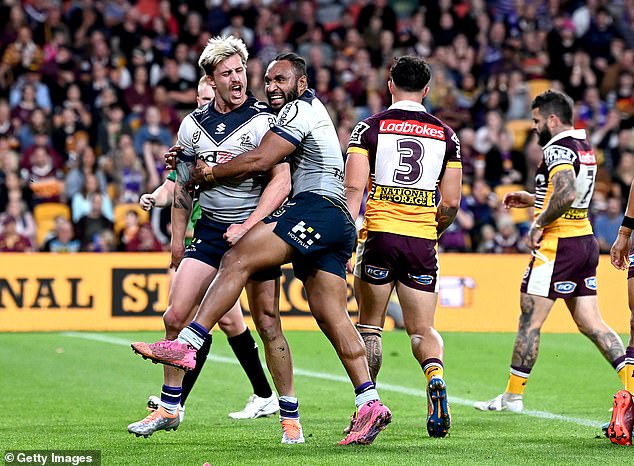 The revelation came after a miscommunication with the two hosts, who thought he said Bellamy was a ‘tiger’s bloke’ instead of a ‘tight bloke’ when they compared his dress sense to the Storm coach.

‘That’s an insult,’ Munster said. ‘He’s a tight bloke and he’s got the worst dress sense so I don’t know if I’ll take that as a compliment.

‘Did you say he’s a tigers bloke?’ Munster was asked.

He clarified: ‘He’s a tight bloke. But Tigers look alright too, I wouldn’t mind orange and black!’

When asked about a potential $8million deal over three years, Munster quipped: ‘That would look nice wouldn’t it.’