A Dutch child under the age of ten has tested positive for monkeypox after a family holiday to Turkey – the first confirmed pediatric case as part of the current outbreak of the tropical virus.

The unnamed youngster was taken to Emma Children’s Hospital in Amsterdam, the Netherlands, in late June complaining of rashes.

Doctors counted 20 lesions over his face, ear, forearms, thighs and back, but the patient did not have a fever or swollen lymph nodes.

Within a week the virus in his body had dropped to non-detectable levels, and he made a full recovery. None of his close contacts tested positive for monkeypox.

It is not clear how he became infected, but testing has ruled out it being down to sexual abuse. The family-of-five said they had no close contact with other guests while on holiday and put their own towels on chairs and loungers.

His parents, one of his siblings and a friend — who were all considered high-risk — were vaccinated with the Jynneous jab, which is being used in America.

The report comes as the United States confirms its first two cases of the tropical virus stateside, as confirmed by the Centers for Disease Control and Prevention.

The youngster — who has not been named — was taken to Emma Children’s Hospital in Amsterdam, the Netherlands, in late June complaining of rashes (pictured is one of the first on his jaw) 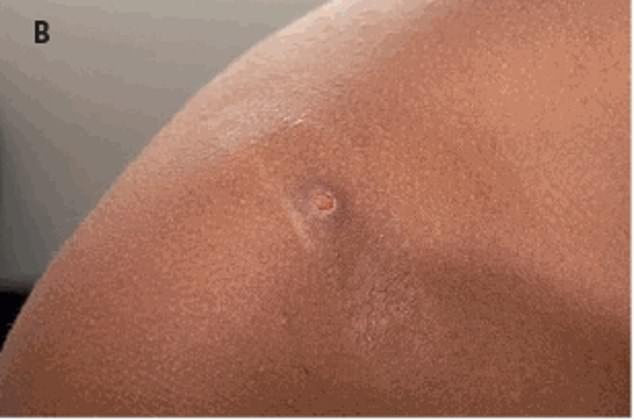 More than 20 rashes erupted over his body, they said 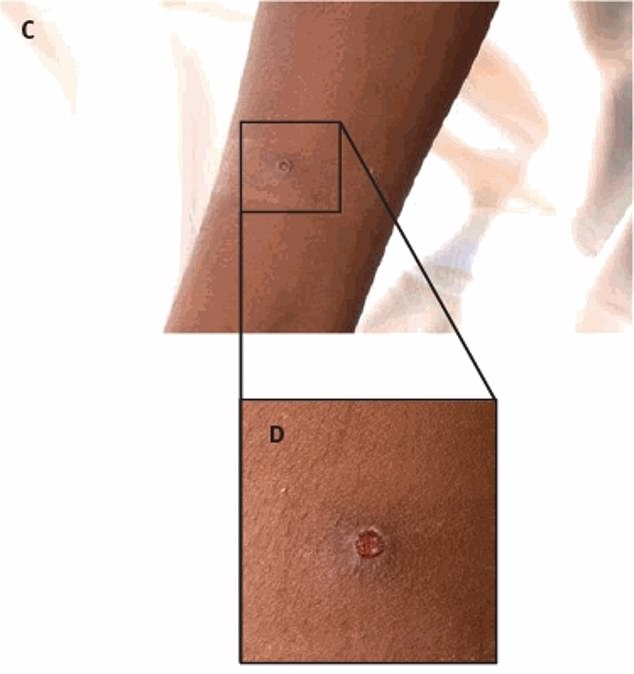 Doctors at the Dutch hospital revealed the diagnosis Thursday in the journal Eurosurveillance.

Dr Marceline van Furth, who led the investigation, said they were publicizing the case to ‘raise awareness… that monkeypox can develop in children’.

They warned that children — alongside older adults and pregnant women — are more vulnerable to monkeypox, with about three percent dying form the infection.

More than 16,000 cases have been detected globally in the current outbreak, mostly among gay or bisexual men who caught the disease through sexual contact.

Experts fear the disease has likely already spilled over into other populations, but has not been detected yet because of a lack of testing.

Monkeypox does not require sexual contact to spread, and is mainly transmitted via close physical contact or scabs that get stuck on towels or bedding. In rare cases it can also be passed on through the air.

America has detected 2,500 cases in the current outbreak — the second highest tally in the world behind only Spain with 3,000. The Netherlands has spotted 700, while Turkey has detected a single case.

The Dutch monkeypox patient first realized he was unwell shortly after returning from Turkey, when he noticed two small red skin lesions on his left cheek and jaw.

But when more lesions appeared the medic feared he had impetigo — a bacterial infection that causes lesions on the body — and gave him antibiotics.

When they continued to crop up over his ear, forearm, thighs and back the boy was referred to hospital with a suspected case of monkeypox — with swabs at the hospital being  positive.

His parents and two siblings were then also tested for the virus, but all returned negative results.

Dutch health authorities vaccinated both parents, one sibling and a friend who were deemed to be at ‘high risk’ of being infected. None later developed the virus.

An investigation was launched to establish where the child caught the disease, but it was inconclusive.

There was no evidence that the child had been near a suspected or confirmed case of monkeypox before catching the disease.

The parents also said they had taken care while on holiday to use their own towels and had not had close contact with other guests, limiting the risk of transmission.

Analyses revealed the strain the boy caught was the same as the one circulating in Europe’s current outbreak.

In the paper, the medics wrote: ‘As no plausible source could be identified, this leaves us with an open question regarding transmission.

‘In the current outbreak, the predominant route of transmission is related to sexual activity in the community of men who have sex with men.

‘However, other indirect transmission routes have been described, such as respiratory transmission through droplets or contaminated materials such as bedding and towels.

‘Therefore, it is possible that the child was in close contact with an infectious person or contaminated object that was not recognized as such.’

They said it typically takes about eight-and-a-half days for someone infected with monkeypox to start showing symptoms.

But suggested it was likely longer — up to 21 days — for the boy because the route of transmission was different.

He had traveled to Turkey three weeks before symptoms began to appear.

His parents said the boy had chickenpox when he was five years old.