The Laugh Factory injected humor into the holidays as it hosted its 42nd annual free Christmas dinner and show on Saturday.

The famed Sunset Strip venue brought comedians including Jeff Ross, Craig Robinson and Jeff Dye together to provide entertainment coupled with a free hot meal for those in need.

‘The comedy club welcomes those who are away from home, as well as those who may be lonely, homeless or simply in need of a warm meal and a few laughs,’ Laugh Factory owner Jamie Masada said in a statement.

Comedic Christmas: The famed Sunset Strip venue hosted its 42nd annual free Christmas Dinner and show which provides Los Angeles residents who are homeless or flying solo for the holidays with a free meal and a few laughs; Craig Robinson pictured 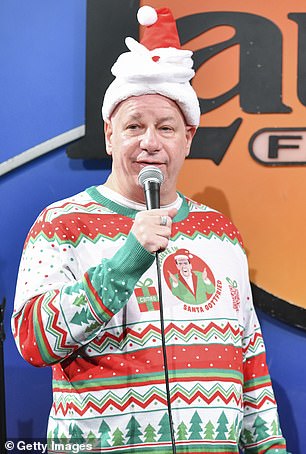 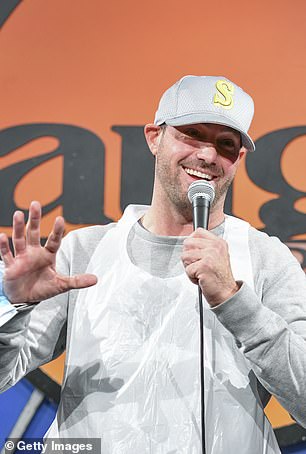 Humor for the holidays: The Laugh Factory brought together a crowd of famed comedians including Jeff Ross (left) and Jeff Dye (right) to entertain on Christmas Day

All the comedians tapped to perform did double duty as they helped to serve a hot buffet meal to attendees before taking their turns on stage.

The ‘Roastmaster’ Jeff Ross, 56, wore a festive Christmas sweater and a campy Santa hat as he performed a set to a full house.

He was followed by the likes of Kristin Cavallari’s ex-boyfriend Jeff Dye, 38, who did a set and later joked that it was easier to serve food to the homeless than to get them to laugh at him.

‘Let me tell ya serving food to the homeless is way easier than telling jokes for them. Lol. Seriously though it was a really fun day of food and laughs and surprisingly music. Love all y’all’ he wrote on Instagram. 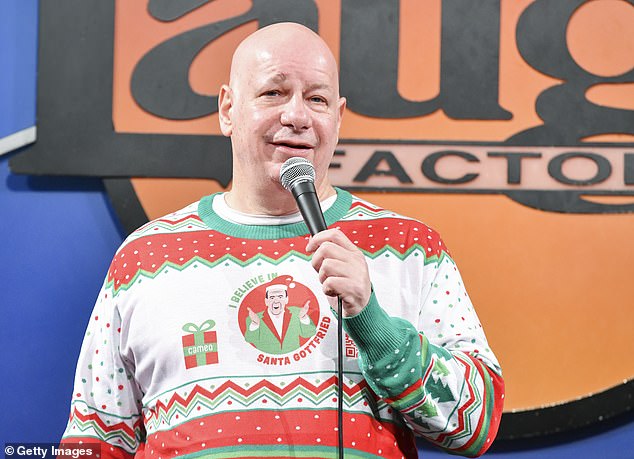 Pot roast! Ross, the ‘Roastmaster’ wore a festive Christmas sweater and a campy Santa hat as he performed a set to a full house 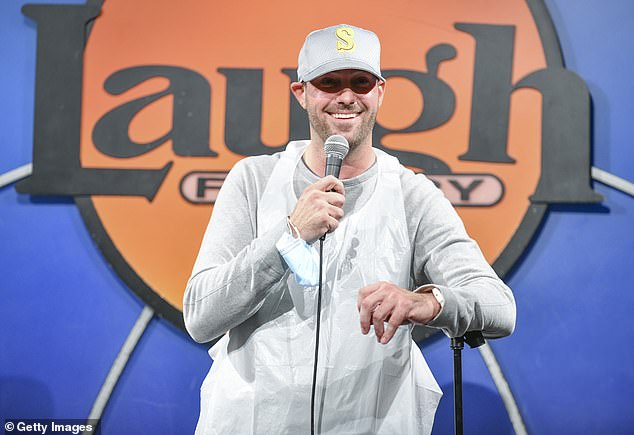 Tough crowd: ‘Let me tell ya serving food to the homeless is way easier than telling jokes for them,’ Dye joked of the event which he said was  a ‘really fun day of food and laughs’ 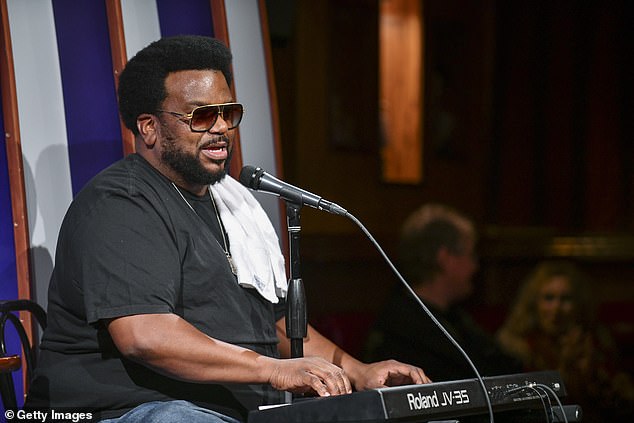 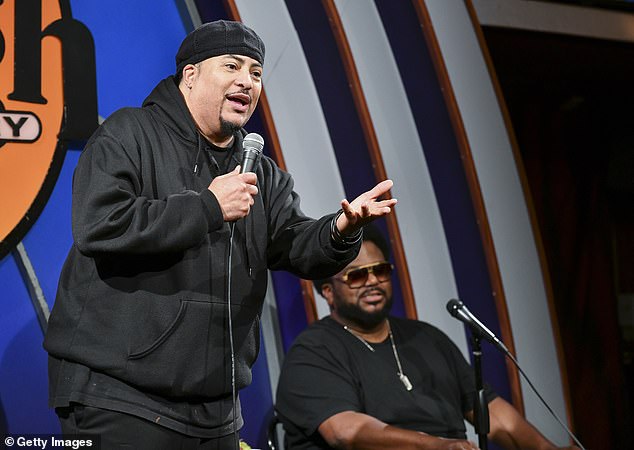 Delighting the crowd: Shang Forbes was pictured doing his thing on stage 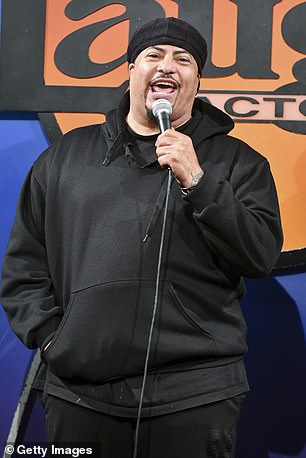 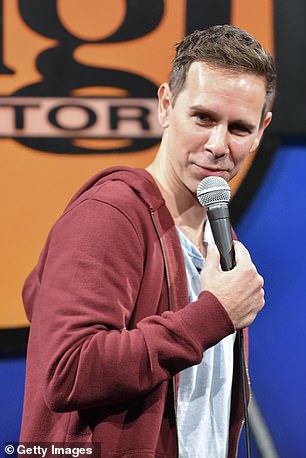 Collaborative: Both Forbes (left) and Jonesy (right) were pictured doing a more collaborative set while Robinson played on the keyboard

Craig Robinson, 50, combined music and comedy for his set, and was pictured behind a keyboard while collaborating with comedians Shang Forbes and Jonesy.

The trio lit up the Laugh Factory with their more theatrical set, before giving way to other acts including Alonzo Bodden, Sunda Croonquist, Jason Rogers, and Tom Dreesen.

It had previously been announced that the lineup was set to include Tiffany Haddish, Tim Allen and Dane Cook as well. 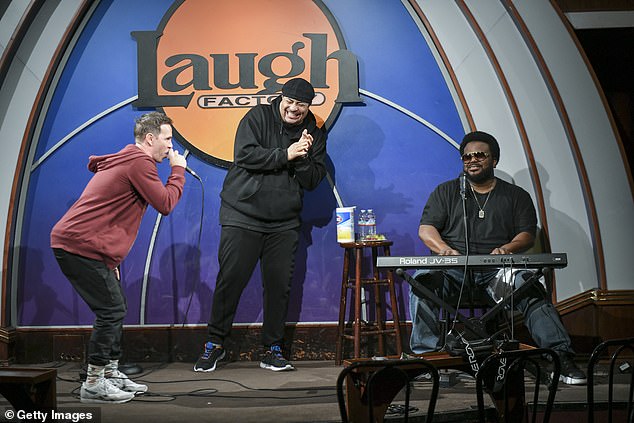 In close quarters: Though the comedians were seen without masks during their sets all required to show proof of vaccination beforehand 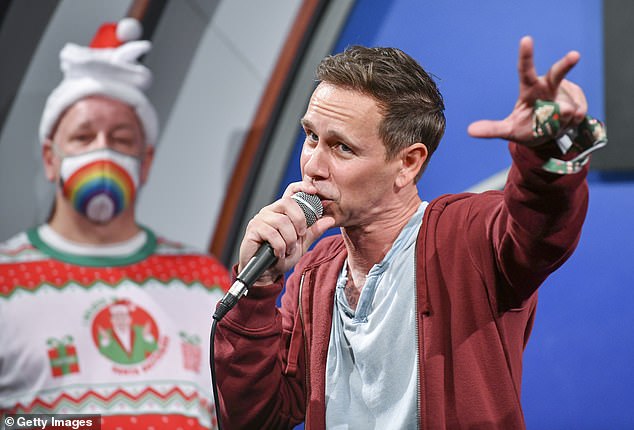 Masked up: Ross was pictured with a rainbow face mask on while Jonesy kept his in hand during the set

Brightening up the day: Comedians Sunda Croonquist (left) and Jason Rogers (right) also injected their senses of humor into the crowd

As the show was held in-person during another COVID-19 variant surge, all attendees — both in the crowd and on stage — were required to show proof of vaccination and wear face masks.

Comedians were permitted to remove their mask during theirs sets but coverings were required at all times with the exception of eating, drinking and performing.

All participants who were unvaccinated received a Christmas meal to go as well as a certificate to get vaccinated at the El Proyecto del Barrio Clinics in the Los Angeles area. 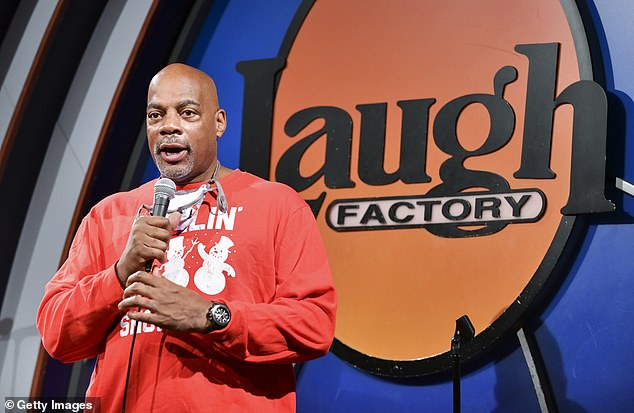 Punny: Alonzo Bodden also performed while wearing a festive shirt that said ‘Rollin with the snowmies’ 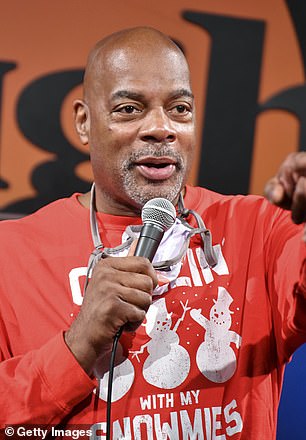 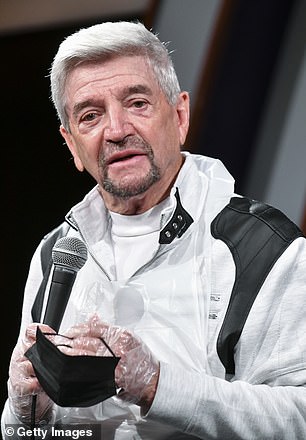 To further ease the process of vaccination, the Laugh Factory vowed to cover cost of transportation to the clinic for anyone interested.

To provide more relief and a cash incentive additionally attendees — a majority homeless — are eligible to receive a $50 cash reward from the venue as long as they can provide proof of vaccination before Valentine’s Day.

Seatings for the Laugh Factory event began around 12PM on Saturday at which point attendees were able to grab a hot meal before sharing a bit of a laugh in a warm space. 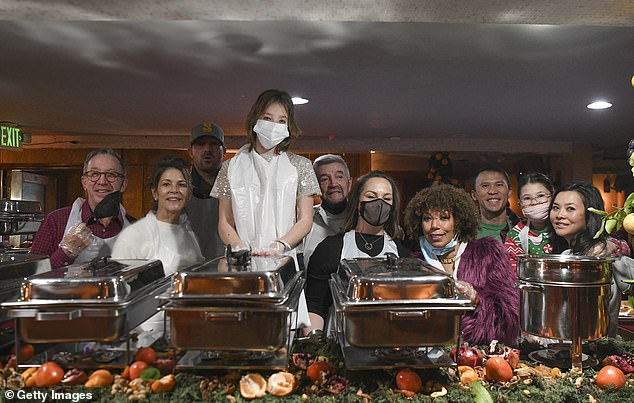 Full bellies: All the comedians tapped to perform did double duty as they helped to serve a hot buffet meal to attendees before taking their turns on stage; (pictured left to right) Tim Allen, Jane Hajduk, Dye, Elizabeth Allen Dick, Dreesen, and Croonquist