Police have warned people across Britain not to attend mass gatherings which have been advertised on fliers promising picnics and live music in cities across the UK this Saturday.

At least eight events are said to have been organised by an anti-vaxxing group called UK Freedom Movement which claims the coronavirus lockdown is illegal.

Many of the group organisers appear to be conspiracy theorists who question how serious a threat coronavirus poses, and are angry at the imposition of lockdown rules.

The gatherings have been promoted on flyers in London, Southampton, Nottingham, Sheffield, Cardiff, Edinburgh, Plymouth and Barnstaple in Devon.

In the posters circulating on social media over the past few days, the organisers have boasted that the events will be the ‘largest mass gathering since the lockdown’.

The legitimacy of the flyers has not yet been verified, but police forces across the UK are taking them seriously, with Nottinghamshire saying it has ‘contingency’ plans in place and Hampshire confirming it is ‘reviewing’ information it has received. 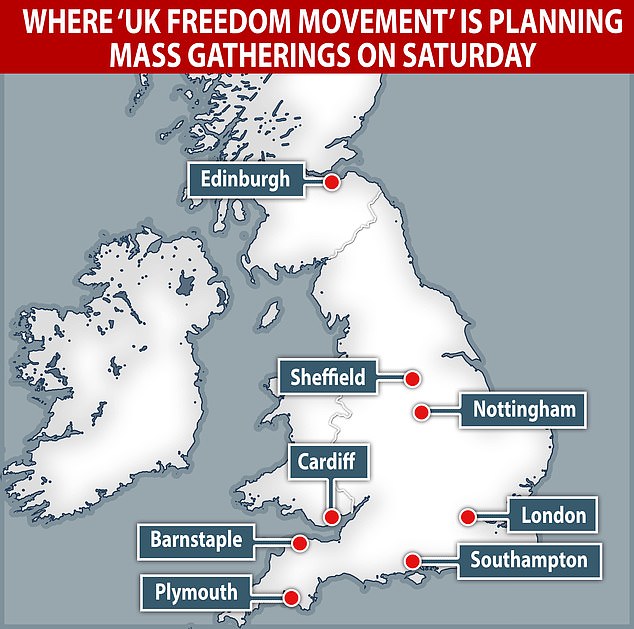 The apparent mass gatherings have been promoted on flyers in London, Southampton, Nottingham, Sheffield, Cardiff, Edinburgh, Plymouth and Barnstaple in Devon

The posters headlined ‘UK Mass Gathering’ said: ‘We say no to the coronavirus bill, no to mandatory vaccines, no to the new normal and no to the unlawful lockdown.’

They also urged people to gather in a major park in the eight locations this Saturday at 12pm and ‘bring a picnic, some music and let’s have some fun and say yes to life’.

One member of the UKFM Facebook group said: ‘If we all gather eating our picnics and adhere to the two-metre rule, we will not be breaking any ‘rules’.’

Another asked members ‘who is coming’ to the gathering at Central Park in Plymouth, adding that a previous Facebook group had since been taken down. 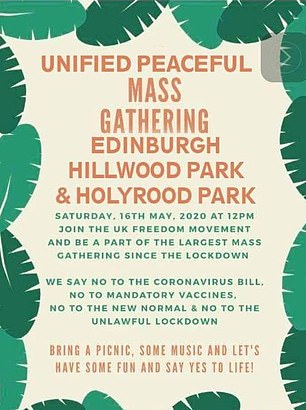 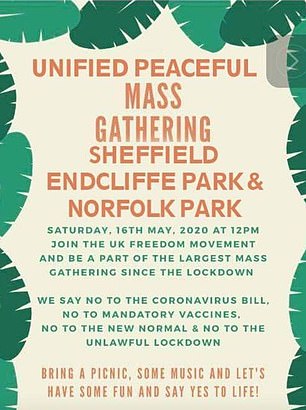 The events, also in Edinburgh (left) and Sheffield (right), are said to have been organised by a group called UK Freedom Movement which claims the coronavirus lockdown is illegal 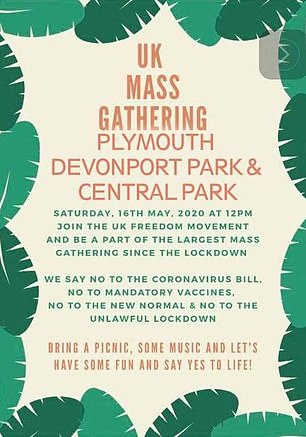 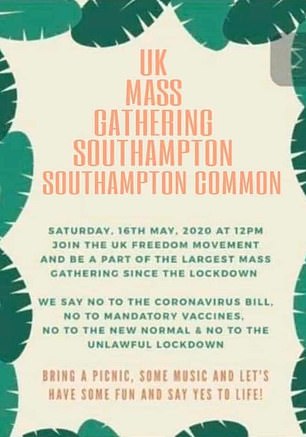 And a London-based music artist called Soca Samuel, tweeted of the Hyde Park gathering: ‘I’m there! I’ve been waiting for a movement like this ever since lockdown.

What do ‘anti-vaxxers’ believe and why are they prolific in Britain?

Members of the UK Freedom Movement are among a group of ‘anti-vaxxers’ who are opposed to child vaccinations.

Parents in the UK are the most opposed to vaccines among major European countries – with the rate of more than three times higher than in Italy, France and Spain, according to a study released last month.

It also found two in five parents in the UK used the internet to decide about their child’s vaccinations.

Concerningingly, given the proliferation of ‘anti-vaxxer’ myths online, more than a quarter of those who found information online about vaccinating their children took it from social media and blogs.

The Daily Mail has been running a major campaign to boost uptake of jabs, amid a surge in British cases of mumps.

This is thought to be driven by the ‘Wakefield generation’ of parents who failed to immunise their babies in the late 1990s and early 2000s after disgraced scientist Andrew Wakefield wrongly claimed the MMR jab was linked to autism.

Last year one in three parents admitted in a poll that their children had missed at least one vital injection.

‘It’s just been me and a few mates together busking in Central London but got a fine by police. Let’s see them try and fine all of us now.’

However the events were criticised by others on social media as an ‘act of stupidity’, while another said: ‘At this point I think it’s just Darwinism.’

A third said that those planning to attend the events were ‘morons who happily put their families and the NHS at risk’.

Mass gatherings were banned by the UK Government on March 16 as the crisis intensified, one week before the full lockdown was imposed on March 23.

Politicians said at the time that the risks of transmitting the disease at mass gatherings was relatively low, but banned them to avoid burdening the emergency services by having to attend the events.

These rules have not changed since the lockdown was eased today, despite people now being allowed to meet one person from another household in a park.

But a Facebook group for the Plymouth event claimed UKFM is acting over ‘serious concerns in regards to our human rights and liberties’ during the crisis.

It said that the Coronavirus Act and the Government’s actions ‘have left people from all walks of life to question the lawfulness and effectiveness of this ‘lockdown’.’

It added: ‘Whether you are anti-5G, anti-vaxx, anti-tyranny, would like to keep your human rights and freedoms or simply fancy a day out and a break from this lockdown, get yourself to Central Park, May 16 from 12pm.’

And the group also told potential attendees: ‘Social distancing and masks are welcomed if you wish to do so. Please do not ridicule anyone for wearing a mask as we are all at different stages of belief in regards to this ‘virus’.’

In Nottingham, police officers will be in attendance at Wollaton Park and Forest Recreation Ground where mass gathering are said to be being planned.

Nottinghamshire Police chief constable Craig Guildford said: ‘We are aware of the social media coverage which includes Southampton, London and Cardiff as well.

‘We are planning, as a contingency, with our partners in the city council as we monitor the situation. 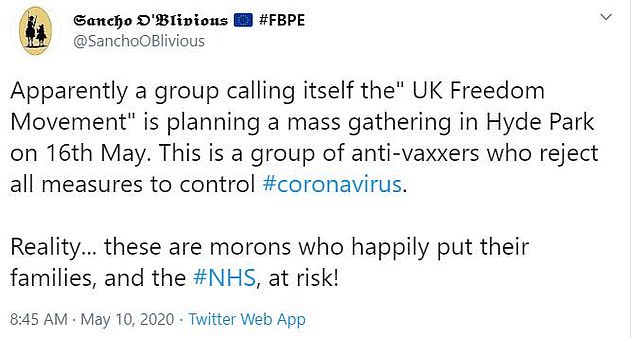 ‘Should any individual endanger the public by not obeying social distancing the police at the scene will be taking positive action to protect the public.’

Nottingham councillor Steve Battlemuch, for Wollaton West, added: ‘The council are aware of it. We don’t particularly want to give a lot of publicity to the event.

‘Everybody is concerned overall about the virus and the lockdown. People want to get back to a normal way of life but we are not in that situation at the moment.’

UKFM organisers are also claimed to be planning a mass gathering at Southampton Common on Saturday, as well as another on Sunday at another location. 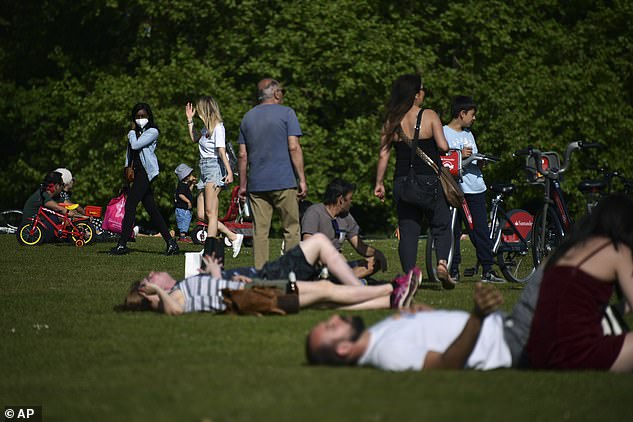 People enjoy the warm weather at Hyde Park in London on May 9, which is claimed to be one of the locations for a planned UK Freedom Movement mass gathering this weekend 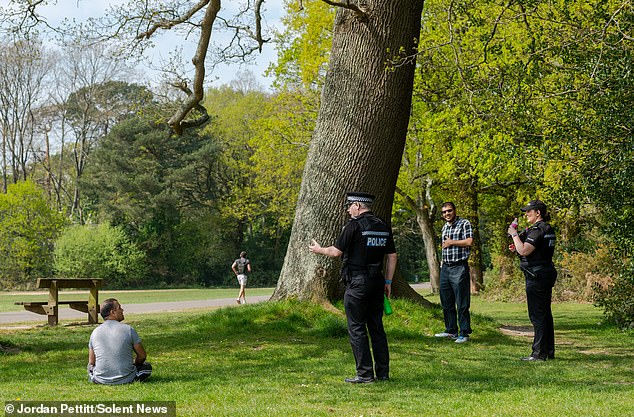 A police officer moves on a man relaxing under a tree at Southampton Common on Easter Sunday last month. The park is one of the locations where the gatherings are allegedly planned

A Hampshire Constabulary spokesman said: ‘We are currently reviewing information we have received regarding a mass gathering being organised in Southampton this coming weekend.

‘We are really grateful to those who contacted us about this and we will continue to assess the information we have in the coming days.

‘Our response will be in line with the Health Protection (Coronavirus, Restrictions) (England) Regulations 2020 which currently prohibits large gatherings of people to limit the spread of Covid-19.’

Other events are also said to be planned at Hyde Park in London, Endcliffe Park in Sheffield, Holyrood Park in Edinburgh and Bute Park in Cardiff.

It follows a much bigger series of anti-lockdown protests in the US which have seen protesters demonstrate outside multiple state capitals over the past month. 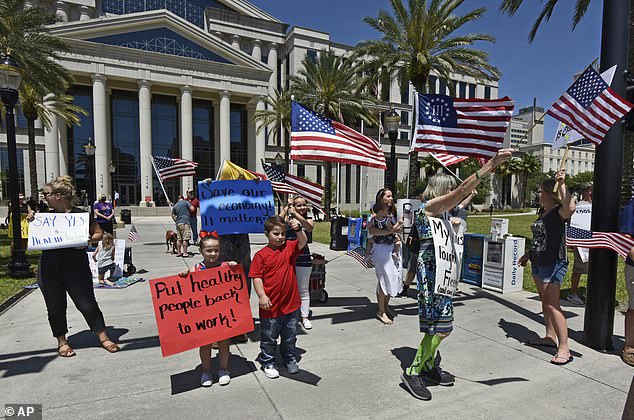 Protesters gather in Jacksonville, Florida, to protest against the US lockdown on April 21 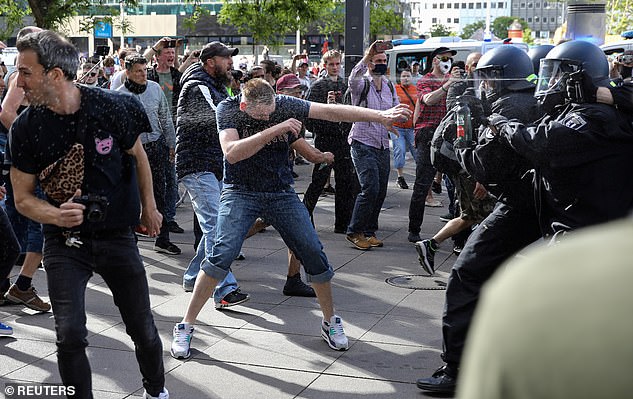 The gatherings have sprung up in the likes of Michigan, Ohio, Kentucky, Minnesota, North Carolina, Utah, California, Texas, Idaho and Pennsylvania.

In Germany, riot police clashed with hundreds of protesters during a demonstration against the lockdown in Berlin last Saturday as they shouted ‘Freiheit!’ (‘Freedom!’).

UKFM, which has existed on Facebook since August 2011, said it is ‘committed to exposing the truth regarding global affairs and how the few control the many’.

A spokesman for UKFM has been contacted for comment by MailOnline today.