Police found the body of a woman in her 20s in her bed after her father went looking for her when she failed to turn up to her birthday celebrations.

A man known to the victim, 47, has been arrested on suspicion of murder after officers were called to the flat in Crawley, West Sussex, last night.

Neighbours described how police ‘flooded’ into the area after her father came searching for her.

It is understood she died as a result of head injuries sustained from a ‘blunt’ object.

A woman aged in her 20s was found dead in her bed at a home in Crawley, West Sussex, last night. Pictured are police taking evidence away from the scene 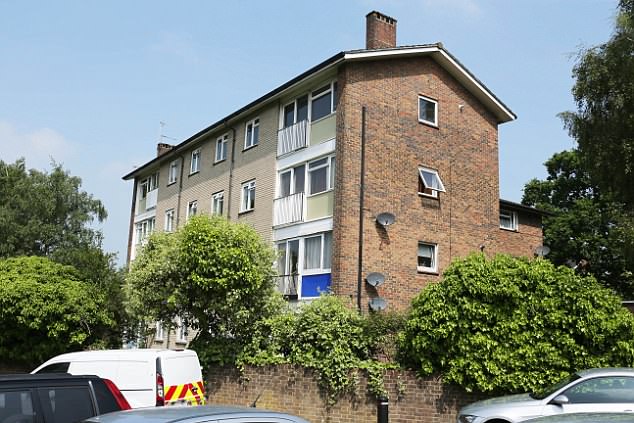 Deliveroo driver Aaron Harvey, 24, who lives in a nearby block of flats, claimed he witnessed the sequence of events unfold as he smoked a cigarette out of his window after a night shift.

He said: ‘This man came over, saying he had been looking for his blonde 28-year-old daughter and had I seen her.

‘He said she had been house-sitting for a man in a flat here for four months.

‘He said no-one had heard from her for about 10 hours and he was worried.

‘He said it was her birthday and she had booked a hotel in London to celebrate with friends but never turned up.’

According to Mr Harvey, the man – who said he was Mauritian – had been looking for his daughter for about an hour but had no response when he knocked on the door of the flat or any others nearby.

He said: ‘I felt sorry for him, he was panicking.

‘I said I had seen a blonde girl who didn’t live here quite a bit recently but I didn’t know her. I hadn’t seen her that day.

‘She would come back in the evening and always seemed to be in a rush. I told him if I saw anything I would let him know and that I hoped he found her.

‘I really hope the police find out what happened to her.’

He said his five-year-old son was kept awake all night worrying about the commotion outside, adding: ‘The man was making phone calls and then the police turned up.

‘First there was one car, then suddenly loads more flooded into the street, and vans and paramedics.

‘They had bright lights on for a long time.

‘Police and ambulances are here all the time, but this was a lot more than usual. We haven’t slept.’

He said shortly afterwards he saw a different man being pushed out of the block of flats in a wheelchair who was ‘covered in blood’.

He added: ‘He was taken over to the ambulance to be treated. We have never seen him before so we don’t think he lives here.’

The man was detained and treated for minor injuries, police said.

Mr Harvey claimed crime had been on the rise in the street, with drug dealing, theft and anti-social behaviour particularly prevalent.

He added: ‘The police know about it and so do the council, which owns the flats.

‘The main doors to the stairwell don’t lock in any of the buildings, including the one where the woman was found.

‘Drunk people come in at night and bang on people’s doors. One day I came home and our door had been kicked in, it still hasn’t been fixed. 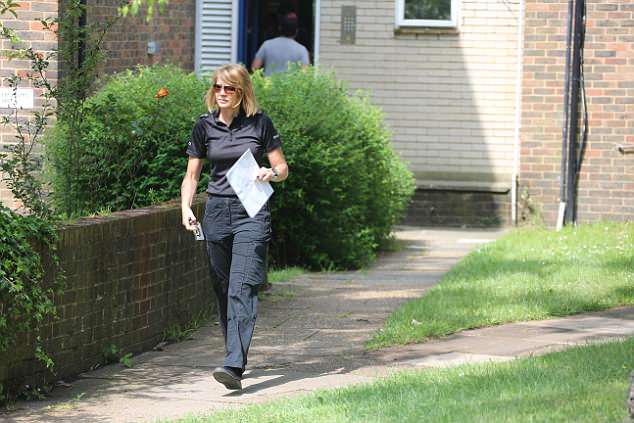 ‘We are just a normal family, we want to know it is a safe place to live.’

Crawley Borough Council and Sussex Police have been contacted for comment.

‘One of my neighbours said that she saw a man being led away from the house by police. He was obviously under arrest.

‘Police were called at 10.30pm yesterday/on Friday by a woman’s friends concerned that she hadn’t turned up to pre-arranged plans.

Detective Chief Inspector Emma Heater, from the Major Crime Team said: ‘We are investigating the circumstances of the death and are appealing to anyone with information to please get in touch with us.’