A private prosecution brought by a Victorian man against Premier Daniel Andrews has been struck out by the court.

The prosecution brought by Anthony Herman, alleging Mr Andrews was ‘concealing an overt act of treason’, was due to be heard in Myrtleford Magistrates Court on Friday morning.

It’s understood the premier, who was this week ordered to test and isolate after coming into contact with a Covid-19 positive case, did not attend in person or online.

The online hearing cut out before the matter was heard, but AAP has confirmed the case was struck out.

The magistrate issued an order noting ‘charge issued not served’.

Criminal procedure rules require charges brought against a person be served on them, and magistrates have the discretion to discontinue cases where there’s been a failure to comply.

A private prosecution brought by a Victorian man against Premier Daniel Andrews has been struck out by the court. Pictured are recent protests against the state leader 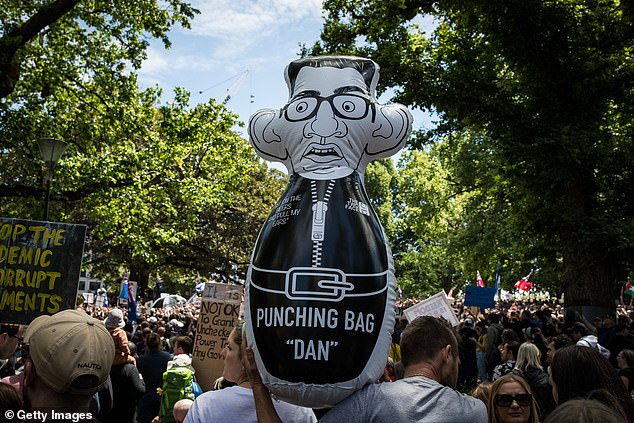 The prosecution brought by Victorian man Anthony Herman, alleging Mr Andrews was ‘concealing an overt act of treason’, was due to be heard in Myrtleford Magistrates Court on Friday morning

Outside court, Mr Herman said he would not give up and claimed the failed prosecution would continue in the Supreme Court.

He said he would also file charges against staff at Myrtleford’s court who had been involved in Friday’s case, claiming there had been ‘horrendous corruption’ and accusing them, alongside Mr Andrews, of ‘concealing treason and fraud’.

‘What people need to understand (is) our constitution has been trespassed upon and stolen from us as we sat around and watched,’ he said.

‘Until we stand up together in a peaceful way, use our brains in a legal way, we are not going to change this.’

More than 900 people attended the online hearing, including many who oppose the premier and Victoria’s coronavirus regulations.

It quickly descended into chaos with people talking, sharing their screens and posting images of Mr Andrews.

The massive number of people in the online hearing caused delays in the premier’s case and others due to be heard in the small local court.

‘Seriously, this is a joke. Some of us are here for legitimate court cases and are being held up by all of you and the palava you are creating. Find another focus and move on,’ one woman said.

Throughout the pandemic online meeting users have become used to being told ‘you’re on mute’ but on Friday the opposite issue occurred with dozens of participants seemingly unable to mute their microphones.

Some took phone calls, others used it as a chance to share the rally cry ‘sack Dan Andrews’ and one person observed it had become ‘a clown show’. 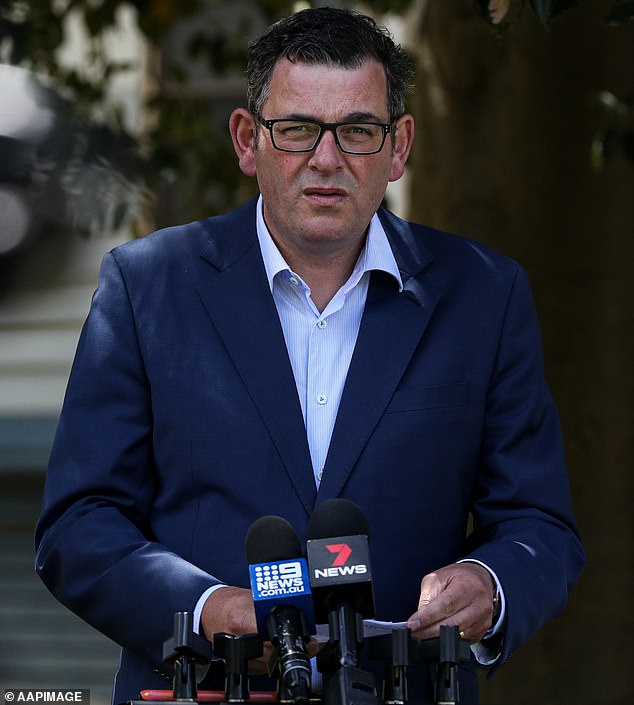 The premier, who was this week ordered to test and isolate after coming into contact with a Covid-19 positive case, did not attend in person or online 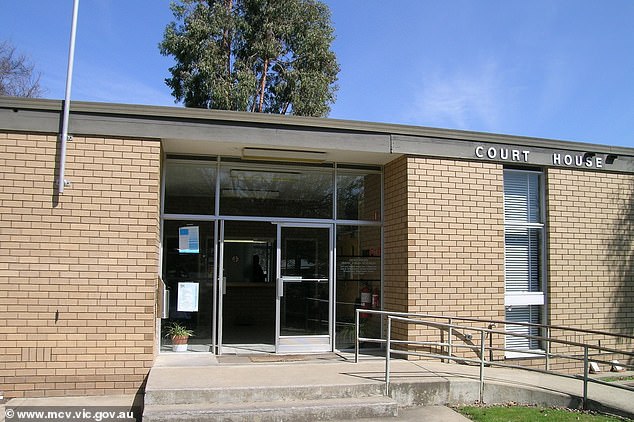 Some speculated it was a conspiracy designed to distract from the actual hearing, sharing their theories in the chat function.

‘Is this a decoy? Where is the judge,’ someone with the username Sovereignlaw wrote.

‘Looks like a fake meeting to me. Just to piss people off,’ another woman named Debbie added.

One woman going by the name Tracey Lucas said it was nice to see everyone on the link.

‘We all want the same thing. Dan Andrews and the government to go down,’ she said.

Outside court there was a crowd of about 100 protesters who gathered for the case.