A Florida lawyer whose work for WikiLeaks landed him before the Mueller Commission and a small group of supporters of President Donald Trump just dropped on social media a humorous pro-MAGA video on the riffs of the 1970s disco anthem YMCA.

Released about noon Monday, the video starts in the same fashion of The Village People’s original song with vintage views of the Manhattan’s old YMCA building -except that in his version, the real neon sign was replaced with MAGA.

In the parody by the fake band The American People, the faces of the original singers dressed to look like a motorcycle cop, an Indian Chief, a cowboy, a construction worker, a biker and a GI are replaced with the faces of Trump as the front man and democratic presidential candidates Bernie Sanders, Joe Biden, Cory Booker as backup singers. 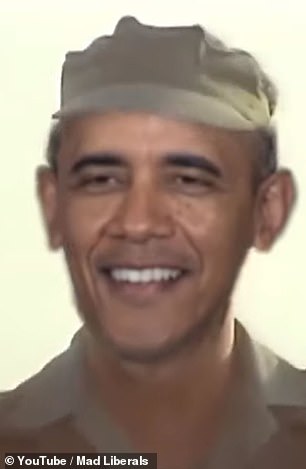 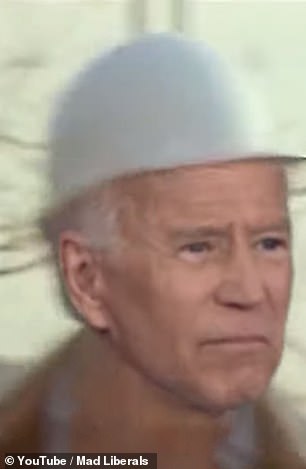 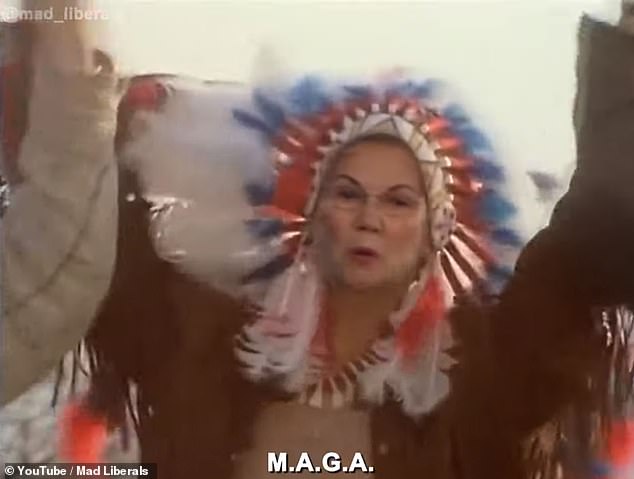 Elizabeth Warren, who once claimed being part-Native American and has been mocked by Trump as ‘Pocahontas’ is depicted as the band’s feather-headed Indian 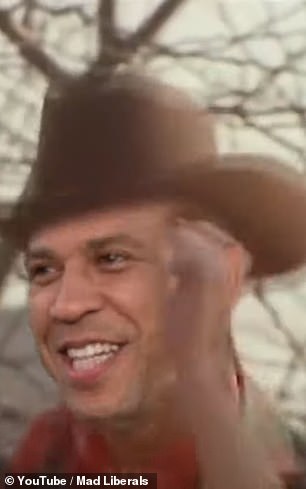 Elizabeth Warren, who once claimed being part-Native American and has been mocked by Trump as ‘Pocahontas’ is, of course, the band’s feather-headed Indian. 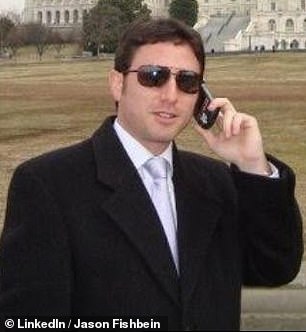 The video is produced by Jason Fishbein, a West Palm Beach lawyer whose representation of WikiLeaks made him a witness for the Mueller investigation

The GI is none other than former President Barack Obama.

‘Young man,’ the song starts like the 1978 original before a change in lyrics, ‘Walk away from the hate, We’re all human and we don’t segregate, Just like women, Help make America great.’

And the chorus of this song is M-A-G-A, Trump’s make America great again catch phrase.

‘We were looking for something un-impeachingly positive,’ said producer Jason Fishbein, a West Palm Beach lawyer whose representation of WikiLeaks and whistleblower Julian Assange made him a witness for the Mueller Commission investigating collusion between Russia and the 2016 Trump campaign.

‘We wanted to tell both sides, Republicans and Democrats, to stop the non-sense. The divisions are bad for the country. It’s a song about unity.’

The song’s about softening up the divisive and chaotic image of the Trump administration as well as ensuring that the unity that Fishbein is talking about forms around Trump’s policies.

‘The Village People and this song, back in the day, gave a positive image of gay people at a time when gay people were being assaulted,’ Fishbein says. ‘Nowadays, people who wear MAGA hats get assaulted. Being with Trump feels a little bit like what being gay probably felt like.’

During Trump’s raucous rallies, says the video’s producer, YMCA has been used to warm up the base. Why not use his tune? 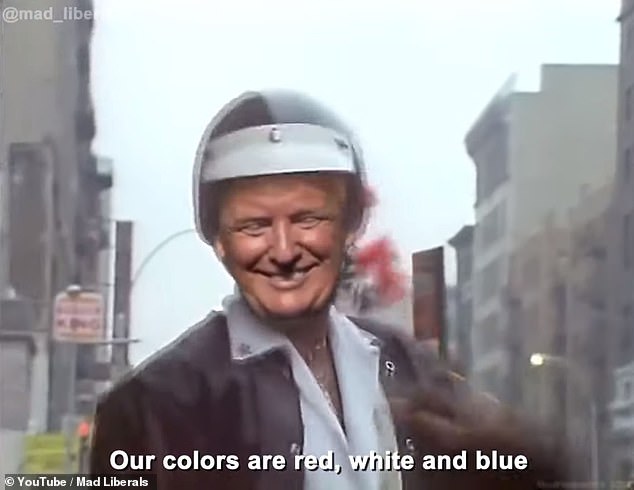 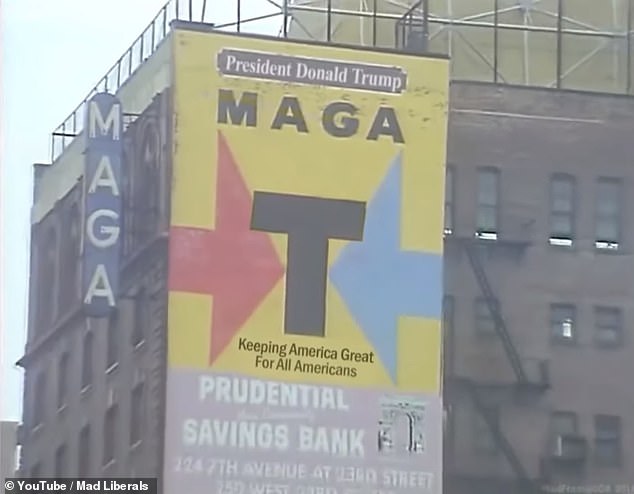 The video starts in the same fashion of The Village People’s original song with vintage views of the Manhattan’s old YMCA building -except that in his version, the sign is replaced with MAGA 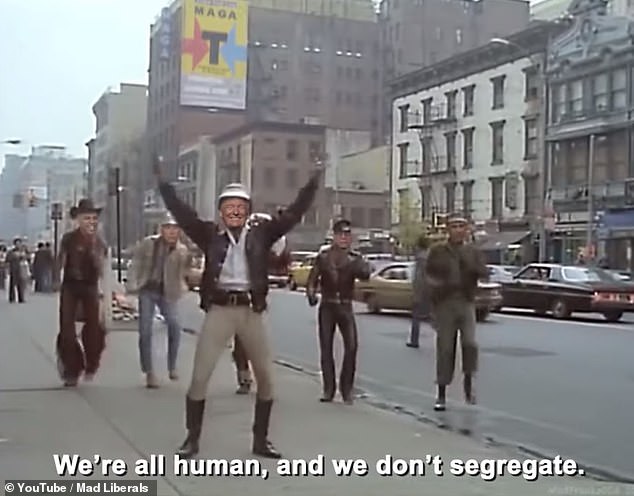 The video producer tells DailyMail.com: ‘We wanted to tell both sides, Republicans and Democrats, to stop the non-sense. It’s a song about unity’

‘Supporters have been dancing to the real YMCA before Trump gets to the podium,’ says the meme maker who goes by @Mad_Liberals on Twitter and YouTube.

The Jupiter, Florida, resident asked that his real name not be used because he has received threats for previous pro-Trump satire. ‘With the MAGA song, they can dance to almost the same hand movement.’

He said he didn’t seek permission from The Village People to produce the tune because the video does not infringe on the original’s copyright protection.

‘It’s just a parody,’ he said, ‘and there are 50 other parodies of that song on the web right now. Besides, we’re not making any money on it.’ 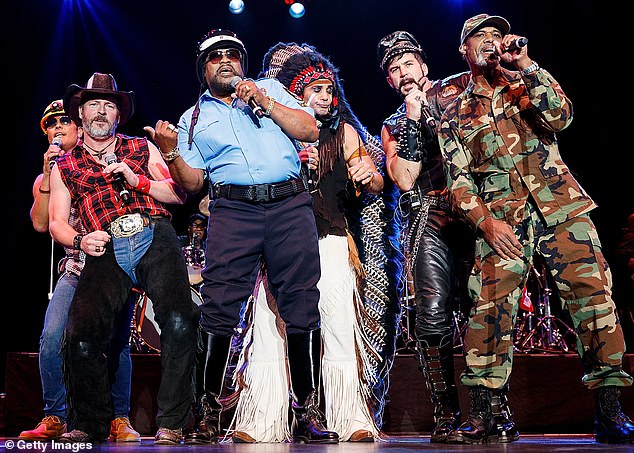 A software developer by day, @Mad_Liberals is in his 50s, and says he never cast a single ballot in any election until he voted for Trump three years ago.

‘Unlike politicians from either the right or the left, Trump ran to make this country better,’ he says.

Still, he made sure the video would not insult or attack anyone.

‘I tried to stay sunny,’ says @Mad_Liberals. ‘Who doesn’t like Bernie in leather? Or Cory Booker in a cowboy hat? As for Elizabeth Warren in an Indian outfit? It’s a natural.’