Drinking just THREE cups of coffee a day during pregnancy may affect your child’s ability to crawl or walk at 12 months old, study warns

It’s a controversial topic that has been widely debated for years: is it safe for women to consume caffeine during pregnancy?

The NHS currently advises that pregnant women should consume no more than 200mg of caffeine per day – the equivalent of two mugs of instant coffee.

But a new study warns that drinking coffee may affect your child’s ability to crawl or walk at the age of one, even if consumed in moderation.

Researchers from Hokkaido University in Japan claim that children born to mothers who consume just three cups of coffee per day have a 1.11-fold increased risk of motor developmental delays at 12 months old.

The NHS advises that pregnant women should have no more than 200mg of caffeine per day. There is:

While some lifestyle habits including smoking and drinking alcohol during pregnancy are widely known to influence the development of the baby, there’s yet to be a consensus on the effects of consuming caffeine.

‘You should limit your caffeine intake when you are trying for a baby and whilst pregnant,’ the NHS advises.

‘A high caffeine intake has been linked to an increased risk of miscarriage and a low birth weight.’

In the study, the researchers set out to assess whether maternal caffeine consumption influences developmental outcomes in children.

The team analysed data from 87,106 mothers in a nationwide study in Japan.

Data included the mothers’ caffeine consumption during pregnancy, as well as the child’s motor skills at six and 12 months of age.

The analysis revealed that children born to mothers who consumed more than 300mg of caffeine per day had a lower risk of developmental delays at six months.

However, by 12 months, they had a 1.11-fold increased risk of motor developmental delays. 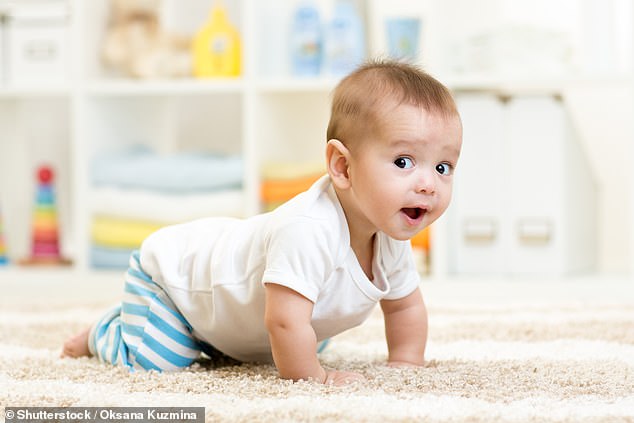 Researchers from Hokkaido University in Japan claim that children born to mothers who consume just three cups of coffee per day have a 1.11-fold increased risk of motor developmental delays at 12 months old (stock image)

The researchers say that the data collected at the age of six months should be interpreted with caution, as it was harder for the mothers to assess a younger child’s motor skills.

‘The results of this study showed that adverse effects of maternal caffeine intake during pregnancy on the development of children were rarely observed at 6 months, and that an association was observed with respect to reduced risk of developmental delays,’ the team explained in their study, published in Early Human Development.

‘Nonetheless, at 12 months of age, all associations with the lower risk observed at 6 months of age disappeared.’

While the reason for the link remains unclear, the researchers hope the findings will encourage pregnant women to limit their caffeine consumption.

‘Further studies will be important to investigate whether the delay in gross motor development at 12 months that is caused by caffeine exposure has an impact on outcomes as the age increases,’ they concluded.