This is the terrifying moment a 27-tonne lorry carrying potatoes drives into the back of a car which had overtaken it to get to turn off at the approaching exit.

The video, filmed from the cab of the lorry on the A59 near Longton, Lancashire, yesterday, shows a white Suzuki Swift indicate left before moving into the same lane as the lorry.

But the car is too close to the trailing HGV, and although the driver slams on the brakes, it still ploughs into the back of the car as the lorry’s horn blares. 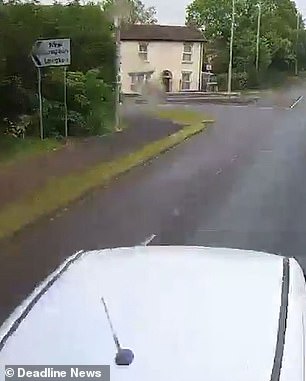 A white Suzuki Swift pulls in front of a lorry before its driver brakes sharply to reach an exit on the A59 near Longton, Lancashire, yesterday. The lorry slams on the brakes. The lorry’s driver cannot stop in time, because he is carrying 27 tonnes of potatoes, and instead ploughs into the back of the woman’s car

The impact causes the Suzuki to nearly veer into barriers next to the exit, before its driver straightens up and comes to a halt further down the road.

The female driver then gets out of the car and inspects the dent on the back before looking up angrily at the lorry’s driver, Adam Swindells, who is swearing throughout.

After posting the video on Facebook, Mr Swindells wrote: ‘Who’s at fault here? I have 27 tonne of spuds on the back as well so I ain’t stopping easy.’

He later said in the comments below the video that the woman had her mother and child with her. 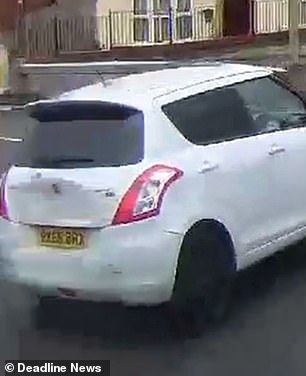 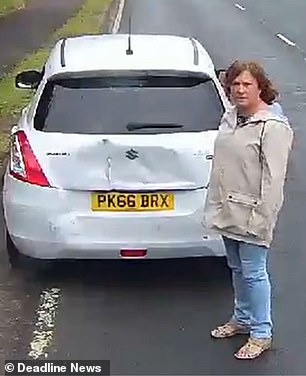 The woman then narrowly avoids crashing into barriers next to the exit before stopping her car further down the road. She then gets out to inspect the damage and stares up angrily at the man

‘She was adamant I hit her on purpose and was speeding,’ he wrote.

‘I had my brakes on to the floor and 27 tonnes of spuds on the back and the thing kept on going. It could have been a lot worse.

‘It was her grandkid as well, and she had her mum in the car who wanted to fight me.’

One person who commented on the video said it was ‘100 per cent’ the woman’s fault.

‘Can see she was trying to cut across you to go off at that exit. She should be done for dangerous driving!’, she wrote.

Barry Panther Chandler added: ‘Her fault didn’t even give the lorry driver anytime to brake.’