Busted: Barbara Lynn Orpineda, 31, an elementary school counselor from Texas has been arrested for allegedly carrying on a sexual relationship with a student

An elementary school counselor from Texas has been arrested for allegedly carrying on a sexual relationship with a student.

Barbara Lynn Orpineda, 31, was arrested on Wednesday on two counts of sexual assault of a child and two counts of engaging in an improper relationship with a student.

The case against the counselor at Arp Elementary School began unfolding on the afternoon of October 11 when two parents and a student contacted administrators accusing Orpineda of inappropriate behavior.

The Arp Independent School District launched an internal investigation and reported the allegations to the Arp Police Department, reported the station KTRE.

Orpineda was suspended from work the following day and placed on administrative leave pending the conclusion of the investigation. She is also currently under review by the Texas Education Agency.

After interviewing the parents and student at the center of this case, as well as classmates who had heard about the allegations, police and deputies with the Smith County Sheriff’s Office have concluded that there was probable cause ‘to believe the allegations were true,’ according to a statement from the school district.

The Child Advocacy Center of Smith County also took part in the two-week-long probe, which led to Orpineda’s arrest on Wednesday night.

The 31-year-old school staffer was booked into the Smith County Jail but was later released after posting $200,000 bond. 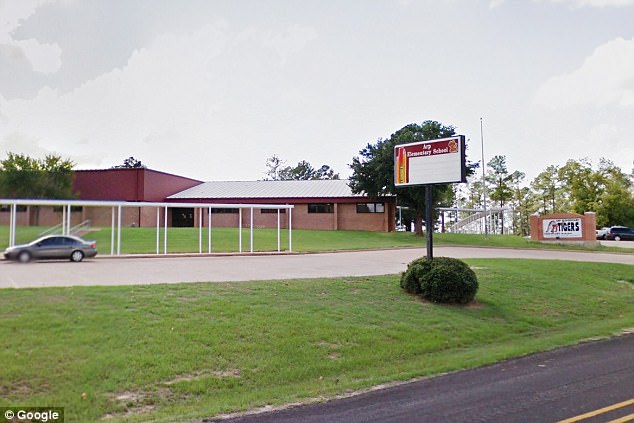 Orpineda was suspended from Arp Elementary School (pictured) on October 12, a day after two parents and a student came forward with allegations against her

According to her personal website, Orpineda, who is married, has a Master’s degree in School Counseling from Lamar University-Beaumont. She taught seventh-grade math for four years before becoming a counselor at Arp Elementary.

Orpineda wrote that her personal counseling philosophy is ‘based on the multifaceted human beings that children truly are and appreciating their individual needs.

‘I believe, through finding what drives a student, counselors provide a gateway to enhance a child’s self-esteem in such a way they do not dwell on the past rather apply their positive and/or negative experience(s) to moving forward.’

As of Friday morning, her name was not listed on Arp Elementary’s website. The school has more than 400 students enrolled in pre-K to 5th grade.