Australia’s track cycling team have snatched the men’s pursuit bronze medal at the Tokyo Olympics in an effort that is being compared to speed skater Steven Bradbury’s legendary victory at the 2002 Winter Games.

The win dramatically came about after New Zealand’s Aaron Gate spectacularly crashed when the Kiwi team were 0.2 of a second ahead of the Aussies in the ride off.

Gate was at the rear of the four-riders and clipped his teammate’s wheels sending him flying to the ground and ruining their chances of getting on the podium.

The fall quickly saw Australia catch up with New Zealand’s third remaining opponent, who had dropped off the paceline because of the crash.

Race commentators said the race had ‘more drama than Home and Away’ after the Aussies experienced their own pre-race set-backs. 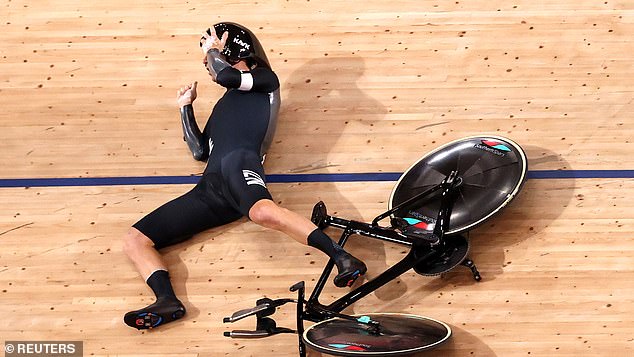 ‘There is more drama at the velodrome than on Home and Away.

‘This is painful to watch for our Kiwi counterparts but great for our Australian boys after the drama they experienced.’

The unlikely victory was some consolation for Australia after Alex Porter face-planted in qualifying, ruining their hopes of a gold medal.

Luke Plapp took his place on Tuesday and again in the bronze medal ride, combining with Leigh Howard, Sam Welsford and Kelland O’Brien.

Filippo Ganna rode superbly as Italy stormed back to beat Denmark in the gold medal ride and broke the record again, clocking three minutes 42.032 seconds to win by just .168 of a second. 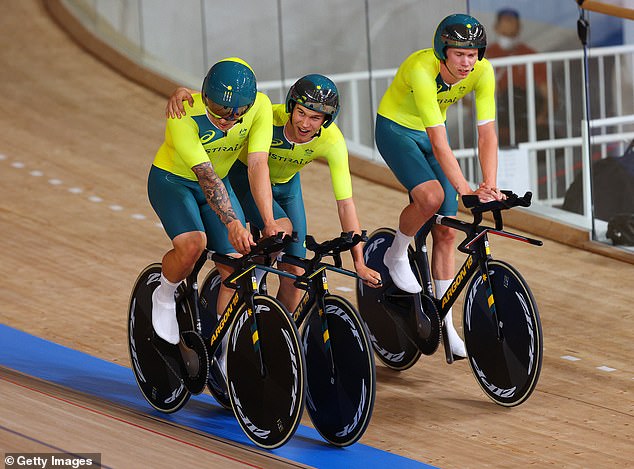 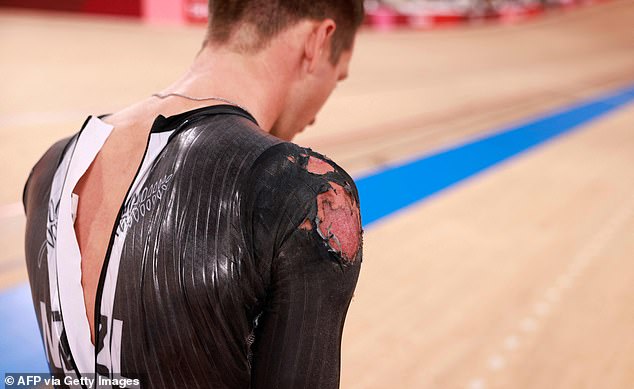 Pictured: New Zealand’s Aaron Gate’s scraped shoulder is seen after he crashed while competing in the men’s track cycling team pursuit finals during the Tokyo 2020 Olympic Games at Izu Velodrome in Izu, Japan, on August 4, 2021

There was more badly needed good news for the Australian track team on Wednesday, with Kaarle McCulloch reaching the keirin quarter-finals.

After finishing fourth in her opening heat, McCulloch took second in a repechage behind Hong Kong star Lee Wai Sze.

That means McCulloch will go into a quarter-final on Thursday night ahead of the medal round.

Until McCulloch’s progression and then the team pursuit bronze, it had been a dim afternoon for the Australians.

Top sprint hope Matthew Glaetzer pulled out of the event, with the team saying he was unwell after combining with Matthew Richardson and Nathan Hart for a frustrating fourth on Tuesday in the team sprint.

Richardson replaced Glaetzer, joining Hart in the match sprint, and they were 22nd and 23rd-fastest out of the 24 qualifiers.

The Australians lost their round-one sprints and were knocked out in the repechage. 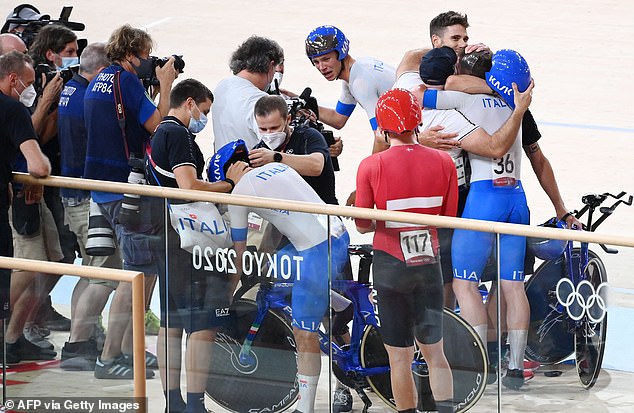 Italy’s Jonathan Milan and teammates celebrate after winning gold and setting a new World Record in the men’s track cycling team pursuit finals during the Tokyo 2020 Olympic Games at Izu Velodrome in Izu, Japan, on August 4, 2021

After the disaster of Rio, the team pursuit bronze is a welcome result, but otherwise it is proving another testing Olympics for the Australian track cycling team.

The fourth for the men’s team sprint and the fifth for the women’s team pursuiters on Tuesday repeated their Rio results.

Glaetzer is yet to win a medal at three Olympics, with four fourth placings.

Anna Meares’ 2012 sprint triumph has been the only Olympics gold medal for the track cycling team since it dominated the 2004 Athens Games, winning five.

Glaetzer was diagnosed with thyroid cancer in late 2019 and missed the February, 2020 world championships because of a torn calf.

He is the top Australian men’s sprinter, winning the 2018 world title in the match sprint and the 2012 team sprint crown.