Kim Kardashian has certainly been showing Kanye West exactly what he’s missing since announcing the end of their marriage in February, last week sharing a stunning photo of herself working out wearing a black monokini on Instagram.

Sporting platinum locks, the skimpy plunging suit with a cut-out middle showed off her svelte physique and infamous curvy bottom as she posed mid-arm press on a piece of outdoor gym equipment, notching up five million likes from her fans with the saucy snap.

If you’re going to do an outdoor workout in the LA heat, then skimpy exercise gear is no doubt a lifesaver when you’re not in an air conditioned gym, but with a plunging neckline, high cut thong briefs and a cutout on the stomach, just how practical is such scanty attire for working up a sweat in the great outdoors?

Can you actually get any exercise done, or does any sudden movement risk losing your modesty?

To put it to the test, FEMAIL reporter Hayley Richardson acquired a copycat suit and bravely popped down to her local park gym in Surrey for a morning workout at the outdoor gym… 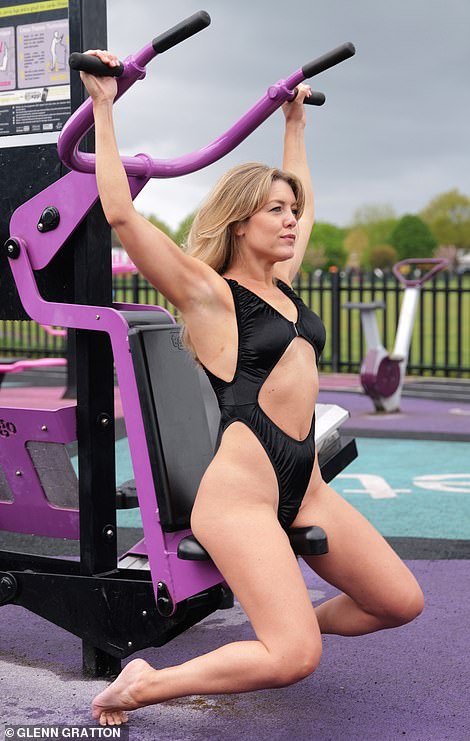 Last week the newly single Keeping Up With The Kardashians star, 40, left little to the imagination when she shared a stunning photo of herself working out wearing a black monokini on Instagram (left). To put it to the test, FEMAIL reporter Hayley Richardson acquired a copycat suit and popped down to her local park gym in Surrey for a Monday morning workout 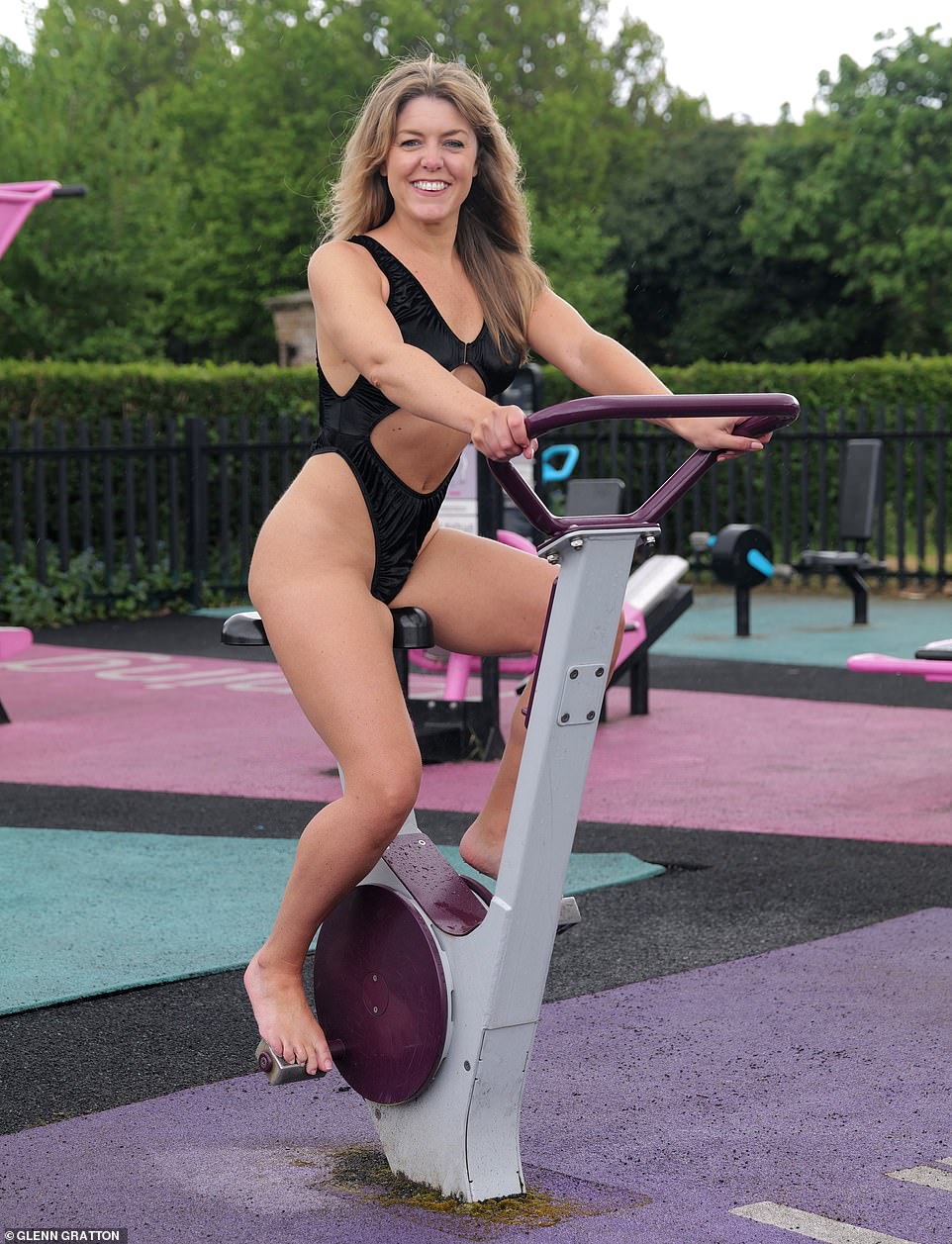 Having never embraced a thong bikini, the experience was a baptism of fire for Hayley, who had to wipe down all the gym equipment after it was left soaking by the rain 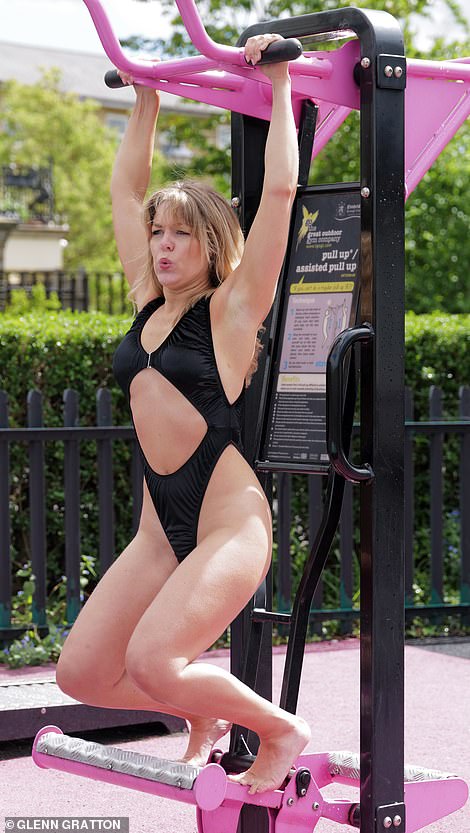 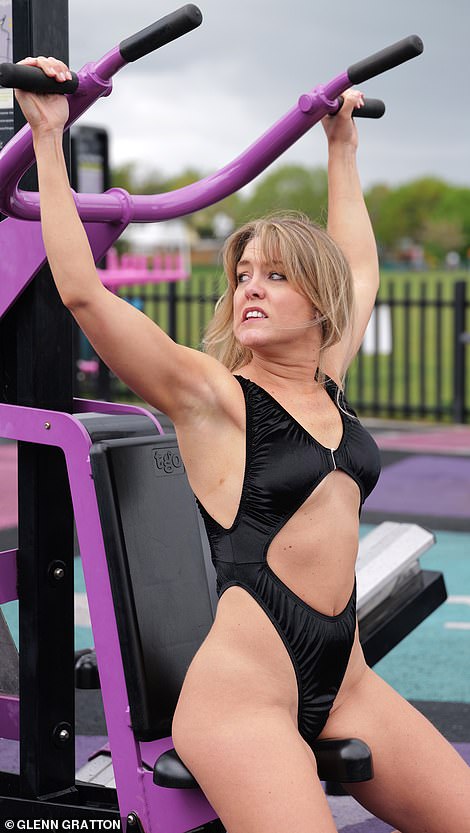 Had she been in a beachside resort, not a windswept gym in her local park, Hayley said she might not have felt quite so out of place

Nervously glancing over my shoulder, I gingerly stepped out of my tracksuit bottoms, removed my coat and re-adjusted my cut-out swimsuit – a PrettyLittleThing special – for the umpteenth time.

Standing there practically naked, I instantly found myself having a newfound respect for streakers. Perhaps I wouldn’t have looked quite so out of place if it was a beachside gym in LA – not a park in Surrey frequented by pensioners and yummy mummies on a blustery Monday morning.

The weather was not on my side – Sunday’s mild conditions had given way to gusty winds and heavy intermittent downpours, and the gym equipment was all soaking wet.

Having come prepared, I proceeded to wipe down the seat of the arm press to have a bash at Kim’s workout. As I bent over, full derriere on show, I spied a local dog walker clock me with a look of abject horror before scurrying away in the opposite direction, her Cockapoo trotting along behind her visibly puzzled by the deviation from their normal route.

I’ve never embraced a thong bikini, so this was well and truly a baptism of fire. As I lowered myself onto the machine, goosebumps flaring, the moment my naked bottom hit the ice cold seat was just as unpleasant as I anticipated. 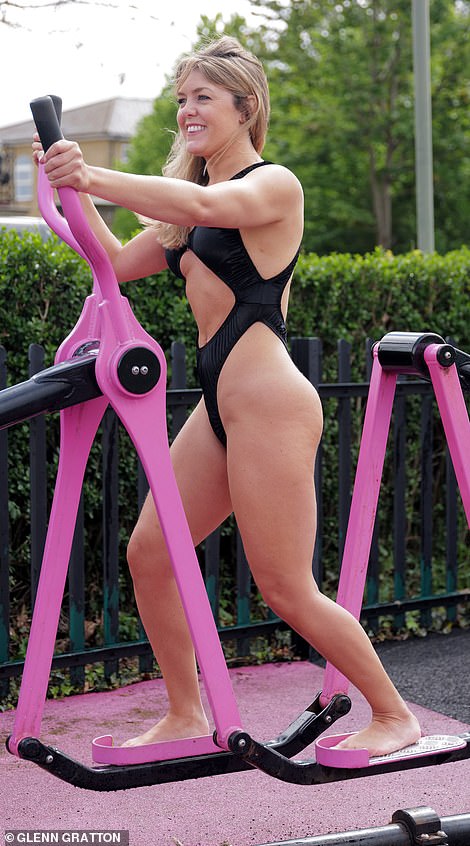 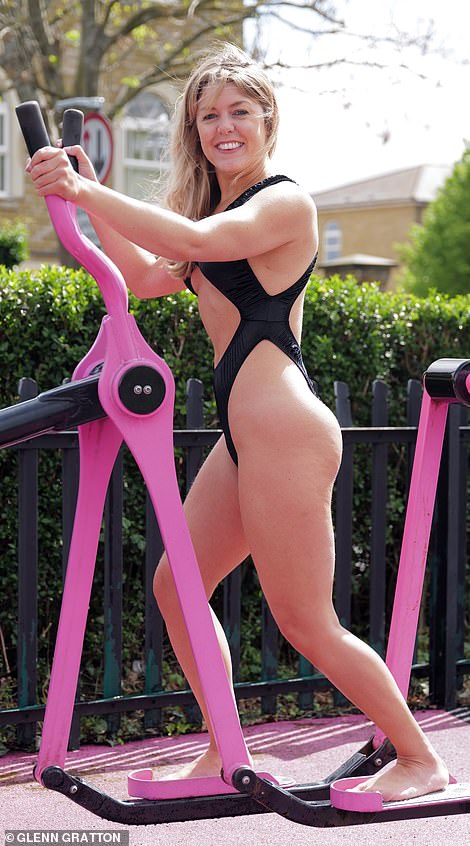 Hayley quickly learned that thongs and cross trainers do not mix. With every stride, she could feel her monokini retreat further and further between her cheeks

Thankfully the back support made me feel a little less exposed – but this was a temporary respite; as I raised my arms to grasp the handles, I could feel the top part of the suit rise higher and higher up my bust, revealing an amount of underboob bordering on indecent, even for Kim K.

After a few rounds on the weights (and more disapproving stares from shocked passersby) I admitted defeat, pulled down my top and grabbed my now-sodden towel to cover my modesty as I hoofed it over to the next machine.

Having opted to go shoe-less like my spirit goddess Kim, once I got to the cross trainer I spent the first few moments picking bits of tarmac off my bare feet before hopping onboard.

I soon found my rhythm, but quickly learned that thongs and cross trainers do not mix. With every stride, I could feel my monokini retreat further and further, which defied belief because I wasn’t sure that was humanly possible. 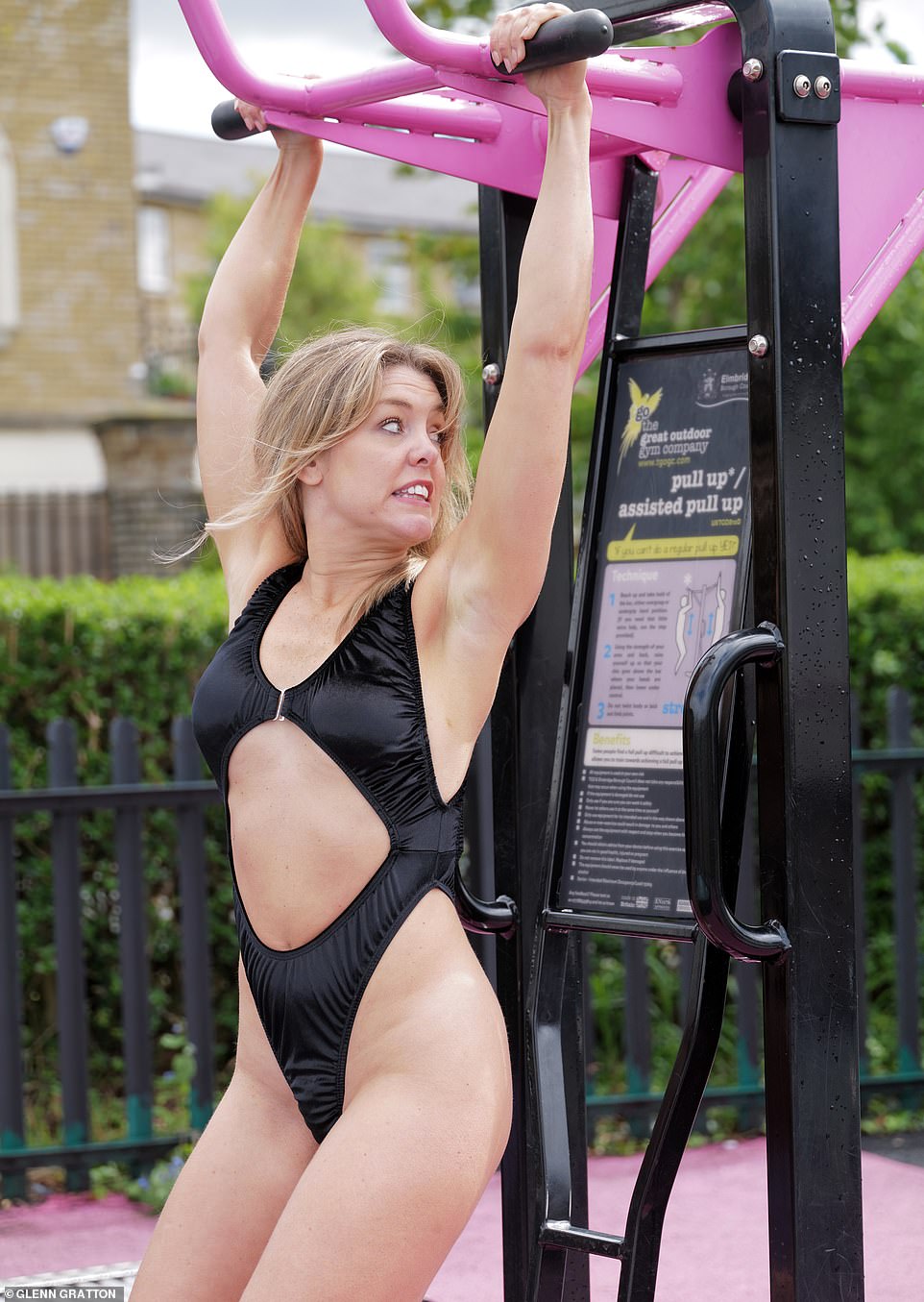 The monokini proved quite impractical for working out; as Hayley raised her arms to grasp the handles, she could feel the top part of the suit rise higher and higher up her bust, revealing an amount of underboob bordering on indecent, even for Kim K 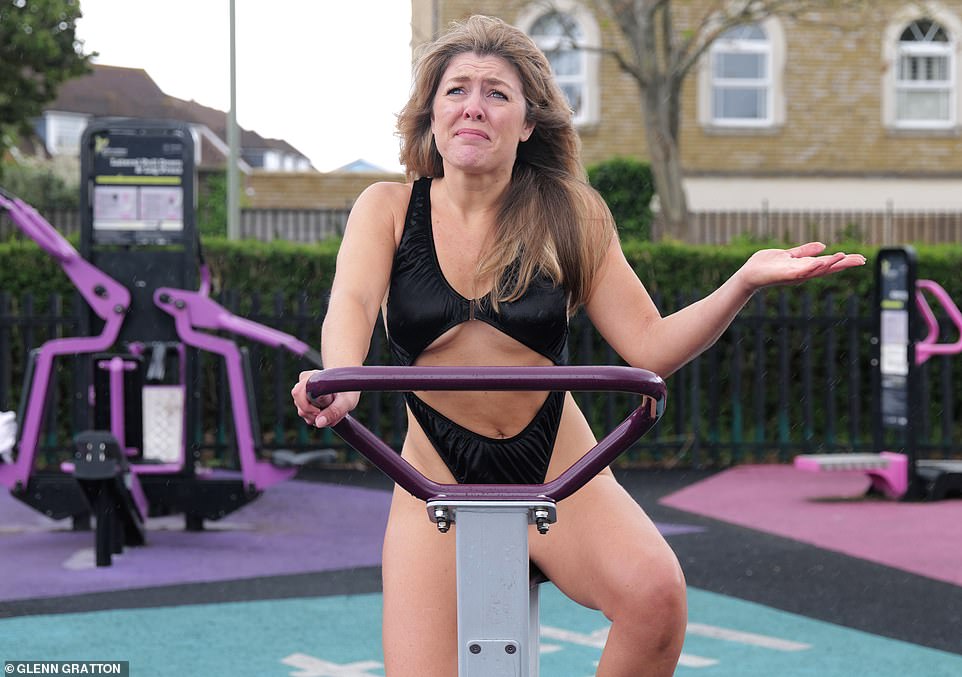 During the workout the heavens opened, forcing Hayley to take a (welcome) break in her car, much to the relief of a local jogger who wanted to use the outdoor gym

It was at this point that a jogger arrived at the outdoor gym, clearly intending to finish off his run with a few toning exercises. We exchanged awkward nods, but rather than come in he teetered at the gate, clearly embarrassed and not quite sure where to look.

Moments later the heavens opened, so I decided to take a break and wait out the shower in my car – much to the relief of the jogger who made a beeline for the leg press and powered through the rain.

Once the shower had passed, I emerged somewhat bedraggled and headed to the exercise bike. Yet again I was faced with the grim sensation of lowering myself onto the damp saddle, and longed to be wearing a pair of my trusty leggings.

As I peddled away, I spotted a group of women chatting animatedly while walking their dogs. To my horror, one of them looked worryingly like my next-door neighbour, so I kept my head down as the trio passed by the gym, audibly muttering their disapproval of my attire (I’m pretty sure I caught the word ‘obscene’). 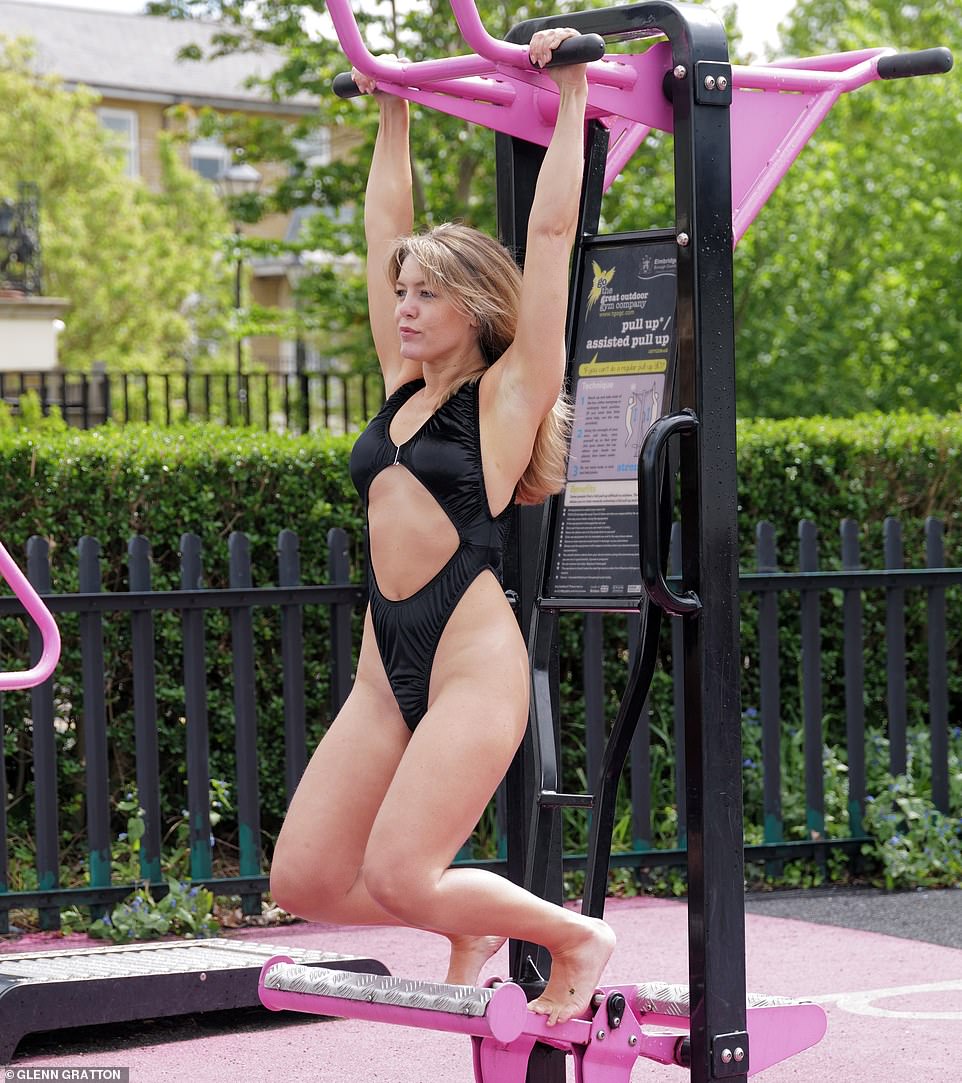 Had the weather been several degrees warmer, Hayley may have been glad of the skimpy suit for keeping cool – but that’s probably where its advantages end 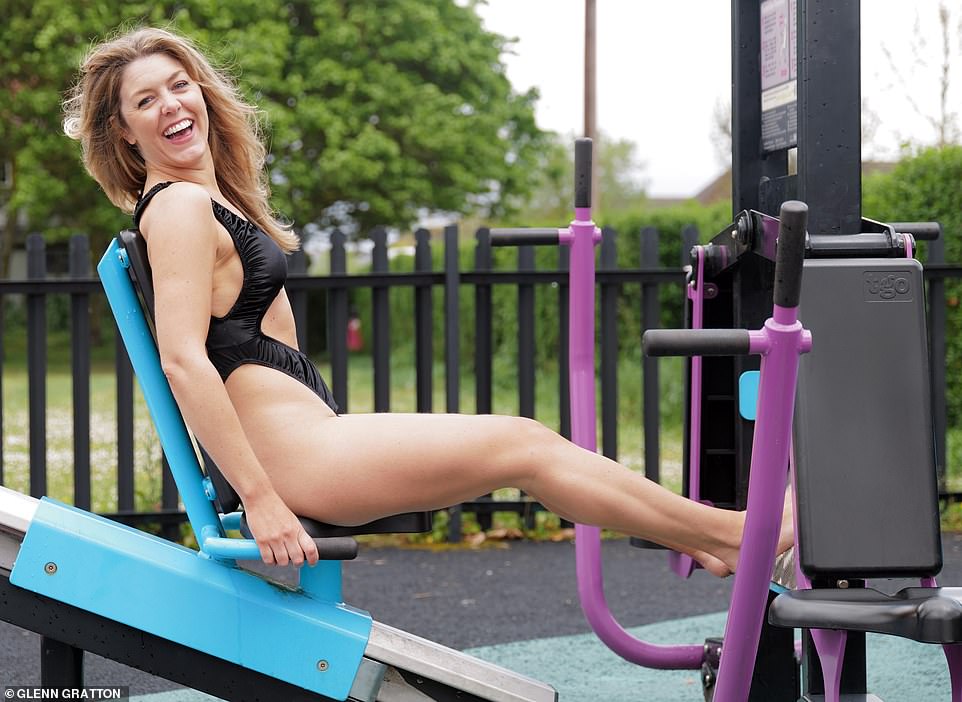 I concluded my workout with a go on the leg press, inspired by my jogger friend, and enjoyed the fact the seated position afforded me a bit more privacy, which by this point was a small mercy

Had the weather been several degrees warmer, I may have been glad of the skimpy suit for keeping me cool when I got going, but after a few minutes the seat began to chafe between my thighs, signalling it was time to stop.

I concluded my workout with a go on the leg press, inspired by my jogger friend, and enjoyed the fact the seated position afforded me a bit more privacy, which by this point was a small mercy.

Feeling decidedly sheepish, I picked up my things and headed back to the car, my attempt to keep up with my favourite Kardashian a downright fiasco.

As for the thong monokini, put it this way, I won’t be auditioning for Love Island any time soon.