In shocking footage, firefighters rush towards a blazing car containing the body of a mother, brutally raped by two killers who teamed up in jail.

Stephen Unwin and William McFall put victim Quyen Ngoc Nguyen through an unimaginable four-hour ordeal after she was lured to Unwin’s home in Tyne and Wear.

The pair met in prison and murdered again after persuading parole boards to free them.

Shocking dashcam footage captured by fire fighters rushing towards the gutted wreck shows the vehicle engulfed in flame – with the victim’s body inside.

In the clip, three personnel race to put out the flames but arrive too late.

Nguyen, a mother-of-two, had employed Unwin as a handyman, unaware that he was a life prisoner out on licence for murdering a pensioner in 1998.

McFall had also murdered a pensioner during a 1996 break-in and met Unwin in HMP Swaleside.

The National Victims Association has called for the Parole Board to be held accountable for releasing the pair after each served just 13 years for their first killings.

They ate a curry as Ms Ngygen lay unconscious on the floor and then set her alight in her car near allotments while she was still alive.

As they drove to the bank afterwards to use her cash card, they took a selfie, with McFall grinning into the camera while Unwin was at the wheel. 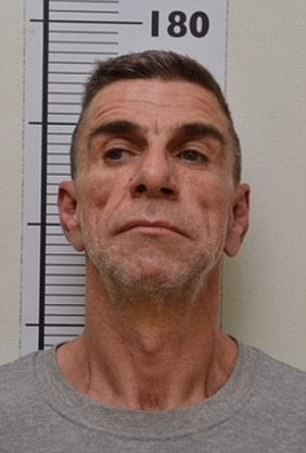 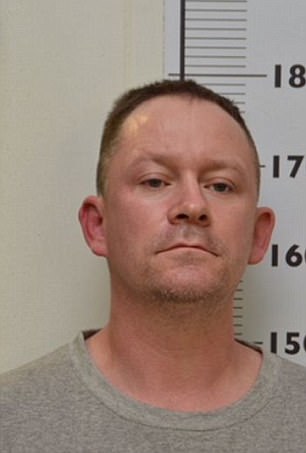 McFall (left) and Unwin (right) were released from life sentences they were given for killing pensioners before they teamed up to murder again, this time a Vietnamese mother 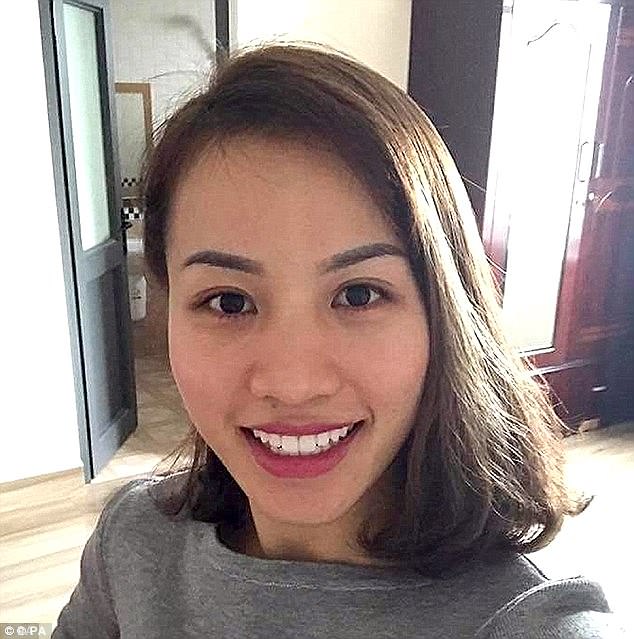 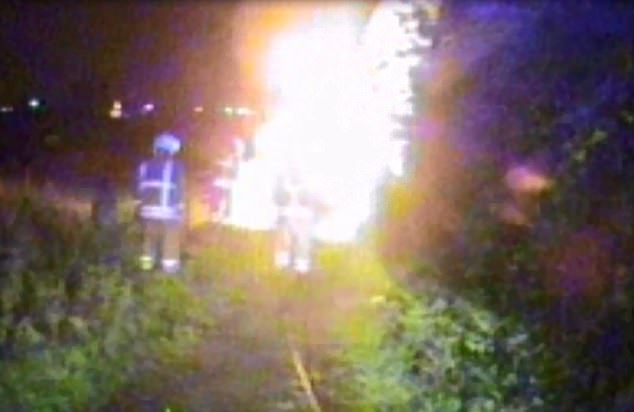 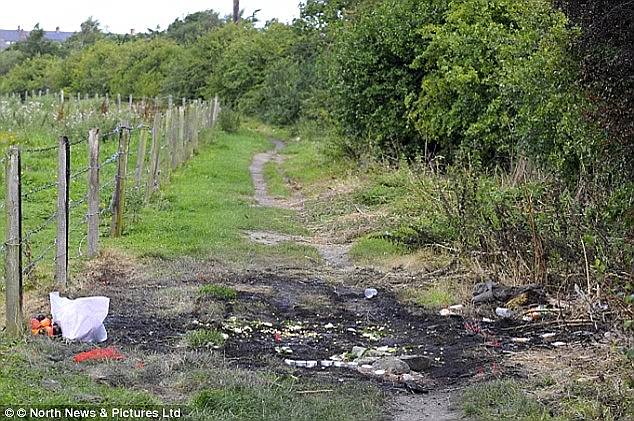 A jury took four hours to find both guilty of murder and Unwin guilty of rape. McFall was cleared of rape. They will be sentenced to their second life sentences next month.

In an outburst from the dock Irishman McFall shouted: ‘You’ve found an innocent man guilty, so you have. I have never had a fair trial.’

Quyen’s sister questioned why the two were released from their original sentences, both imposed for the murder of vulnerable elderly victims in their own homes in the 1990s.

Devastated Quynh Ngoc Nguyen said the British government had been ‘too kind to evil men.’

Quyen, a mother of two who entered the country in 2010 to study business at the London School of Commerce was murdered on August 15 last year after coming into contact with Unwin, 40, and McFall, 51, when they were carrying out work as handymen on flats she was renting out.

The victim visited Unwin at his terraced home in Shiney Row, near Sunderland, to discuss some more work for him and was set upon by the pair after she stepped inside. 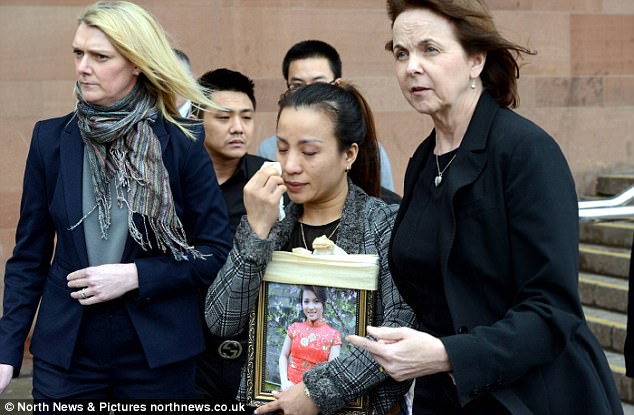 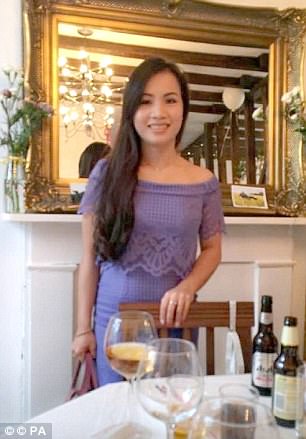 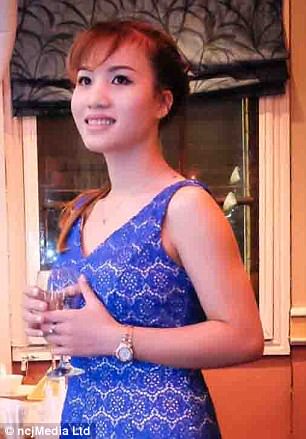 Miss Quyen, a mother of two who entered the country in 2010 to study business at the London School of Commerce was murdered on August 15 last year

On the night of her murder McFall messaged Unwin to ask: ‘Are we raping the c****?’

Quyen was beaten, throttled with a ligature around her neck and raped by Unwin who used a gas-powered pistol and a Star Wars lightsabre toy in the degrading assault.

After she’d been in the house for five hours she was wrapped in a white sheet and carried out to her black Audi A4 which was then driven by Unwin to a lane leading to allotments.

They doused her in petrol and set both her and the car ablaze. Forensic tests later revealed that Quyen was still alive when she was set on fire. 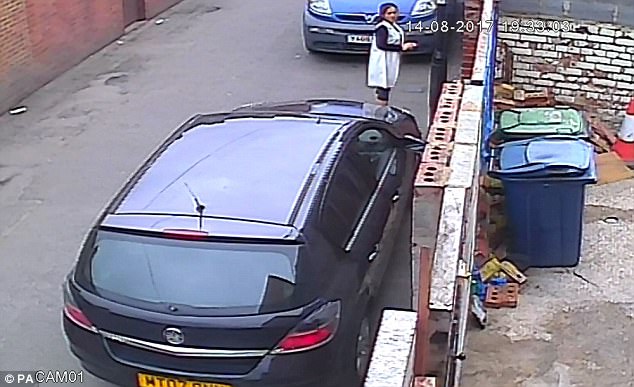 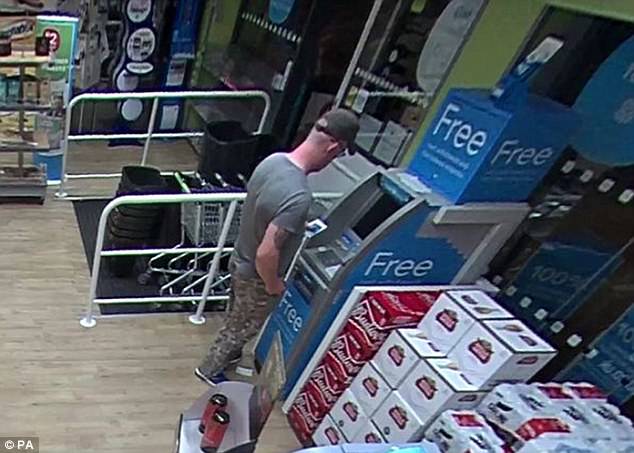 The pair used her bank cards and PIN numbers, which they had forced out of her, to make a number of withdrawals from her account.

Unwin and McFall, who first met in HMP Swaleside on the Isle of Sheppey in Kent, were swiftly arrested by police who tracked them on CCTV.

The inseparable friends cooked up a plan to blame each other, hoping it was would give them a legal loophole.

Unwin claimed McFall strangled their victim with a ligature, a scene he walked in on while buying cigarettes at the local Coop. McFall said he watched Unwin smother her before he went to the shop.

Whilst on remand McFall wrote a letter to Unwin headed: ‘Destroy once you have read bro.’ 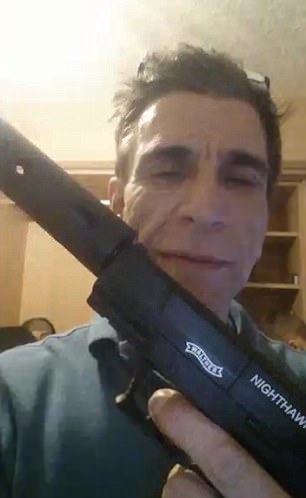 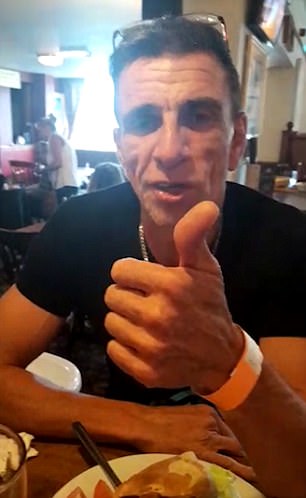 In it he wrote: ‘Spent last week going through a law book in the library. With a bit of luck I’ve found a legal loophole.’

Unwin killed cancer-stricken retired pharmacist John Greenwell in Houghton-le-Spring, Tyne and Wear, knocking his 73-year-old victim to the floor before torching his bungalow, setting three seats of fire. He was released on licence on December 20, 2012.

McFall bludgeoned to death Martha Gilmore, 77, to death with a hammer in a raid on her home on May 5th 1996, hiding the weapon in a graveyard. He was released on licence on October 29, 2010.

Unwin also had previous convictions for theft, burglary and arson, the court was told. In a previous burglary he had set fire to the victim’s home but the 72-year-old man was rescued by neighbours. 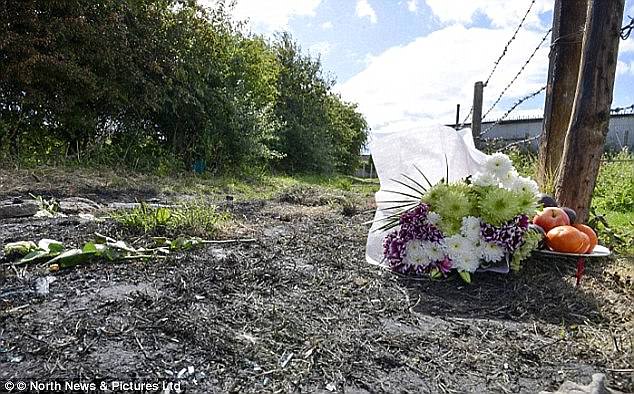 David Hines of the National Victims Association said the Parole Board and probation service must be held accountable for McFall and Unwin being freed to kill.

He said: ‘The Parole Board makes these decision about who is and who is not fit to be freed from prison and when it goes wrong, as it has so catastrophically in this case, they are never held accountable and that is wrong.

‘We need to put some fear into these people, some sense that the decisions they are making are vital to the safety of the general public but as things stand no action is ever taken when things go wrong.

‘Someone involved in freeing these two people, in failing to monitor them correctly, in allowing this young woman’s murder, should themselves be standing in front of a court to answer for their failings.

‘It’s another appalling example of how the justice system is failing the people it is set up to protect.’

The sister of a Vietnamese woman who was tortured by two convicted murderers has said they are evil and should die behind bars.

Nail bar owner Quyen Ngoc Nguyen suffered unimaginable horror at the hands of Stephen Unwin and William McFall, who teamed up after meeting in prison when they were serving life sentences.

Her sister, Quynh, 32, said that for the safety of the public they should never be released. 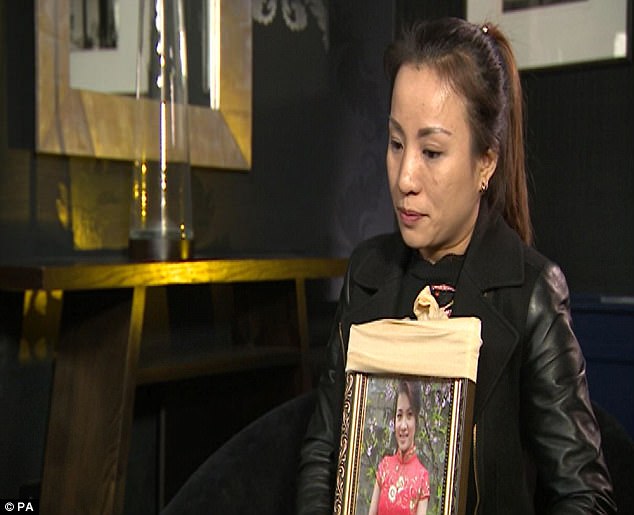 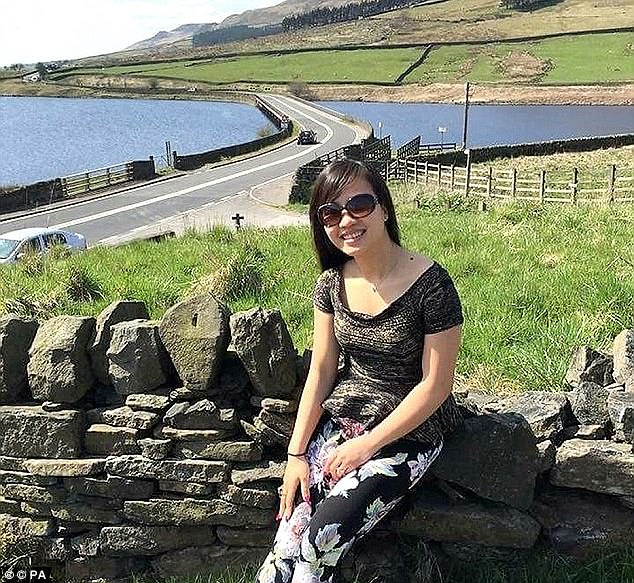 Quyen came from Vinh, a city in the north of Vietnam, and moved to the UK in 2010 to study business in London

Speaking through an interpreter, she said: ‘I don’t want to blame anyone but it seems that the Government is too kind to these people, because what they have done is terrible.

‘My sister has passed away and nothing can change that. But I believe that if these two people were released at some point in the future, then definitely some innocent people could be harmed.

‘I think they should never be released, they are evil.’

The sisters ran a nail bar in Gateshead, and lived together in Killingworth, North Tyneside, bringing up their children in the same house.

When she heard the news that her sister had been murdered, Quynh could not bring herself to tell their parents in Vietnam.

She described her sister as trusting but also naive. 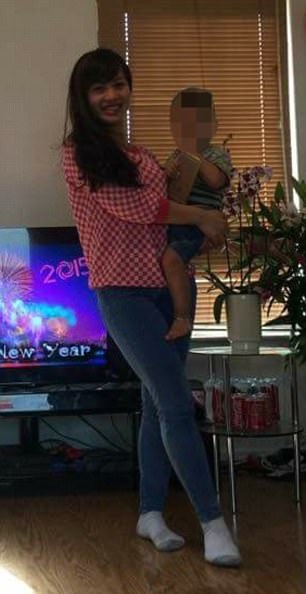 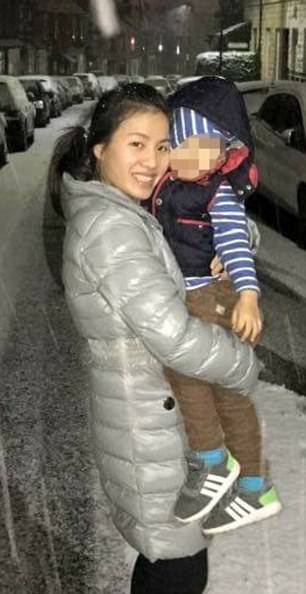 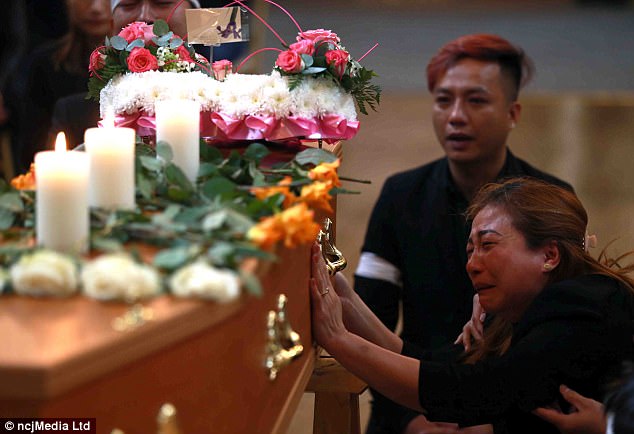 She has followed the court proceedings, despite the torment of hearing in detail the ordeal her sister faced.

Quynh, holding a framed photo of Quyen, said: ‘I took all the courage that I have in order to know exactly what happened to my sister.

‘But sometimes when I hear the stories from the two defendants, I was so resentful, I couldn’t control myself.

‘They make up stories that you just cannot imagine how they do things like that.’

Quyen came from Vinh, a city in the north of Vietnam, and moved to the UK in 2010 to study business in London.

As well as working in the nail bar Quyen helped Vietnamese people who may not have had the correct documents to find accommodation.

Victims’ group calls for tougher sentences in wake of scandal 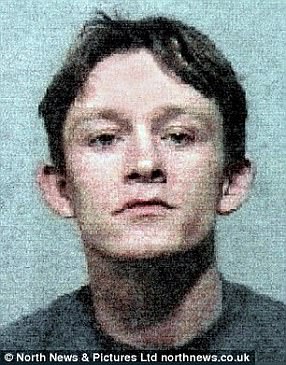 Stephen Unwin after his first conviction. He was freed after 13 years

Murderers should serve at least 40 years in jail and not be released before that on licence, a victims’ campaigner said after the case.

Stephen Unwin and William McFall murdered pensioners in separate attacks in the 1990s, made friends in prison and teamed up to kill again in the most twisted fashion.

David Hines, founder of the National Victims’ Association, had argued against Unwin being freed after he served just 13 years of a life sentence for murdering a pensioner during a burglary on Christmas Day 1998.

According to reports, when a judge set the minimum term Unwin faced in 2007, years after his original life sentence, he said the killer had shown ‘deep remorse’.

At the time Mr Hines said: ‘This is just one example of a multitude of cases where the courts are just rubber-stamping early releases for these people. It’s unbelievable.’ 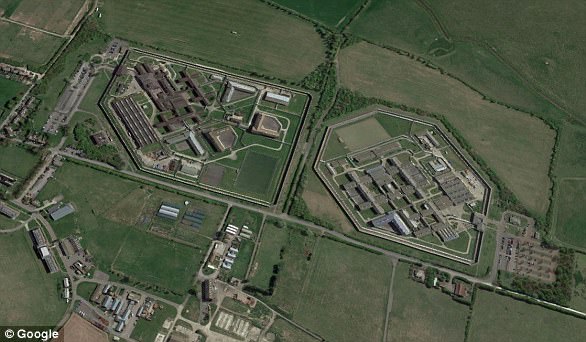 After Unwin and McFall were convicted of their dreadful second murder, Mr Hines said: ‘A life sentence should mean a minimum of 40 years behind bars.

‘If they do get let out, it has to be guaranteed that they are safe, and the people who let them out have to be accountable.

‘These two first murdered senior citizens, followed each other around the prison system and became friends, and then went on to do all kinds of horrible deeds together.

‘I blame the politicians for not changing the law. We haven’t got a strong enough criminal justice system.’