A recovery coach who was a ’24-hour-a-day vodka drinker’ for six years says she hit ‘rock bottom’ when she became so weak she got a staph infection from lying in her own filth for a month.

Jessica Landon, 37, from Rancho Cucamonga, California, moved to Los Angeles when she was 19 years old with dreams of becoming an actress and model.

She hung out and partied at the infamous Playboy mansion with Hugh Hefner, but soon she began drinking heavily.

By 26, Landon drank vodka so often that she would ensure she had a water bottle filled with the spirit on her at all times.

She tried to get sober but, after several relapses, she tripped over a stair rail and suffered a brain hemorrhage that needed to be drained.

After recovering from her injury, Landon relapsed again and was admitted to the hospital in January 2014 with a blood staph infection and organs failure after spending a month lying in her own filth and the acid in her urine ate away at her skin.

Now, Landon has been sober for five-and-a-half years working as a recovery coach, and says she wants to stop alcohol consumption from being glamorized by Hollywood and on social media. 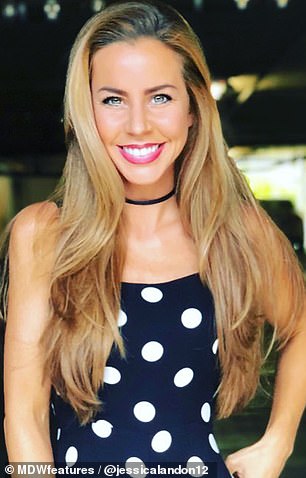 Jessica Landon, 37 (left and right) from Rancho Cucamonga, California, moved to Los Angeles at age 19 in hopes of becoming actress. She soon began partying at places such as the Playboy mansion and drinking heavily 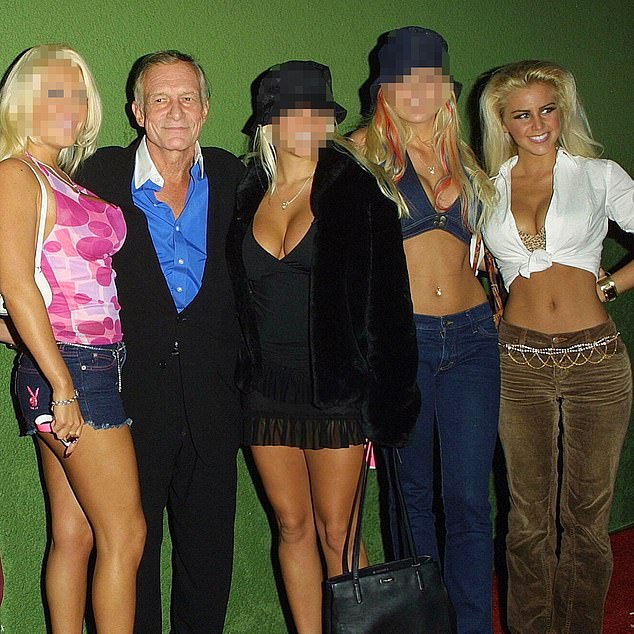 She began drinking heavily and, by age 26, she was a ‘twenty-four-hour-a-day vodka drinker’. Pictured: Landon, far right, at age 19 at a party with Hugh Hefner and other girls from the Playboy Mansion 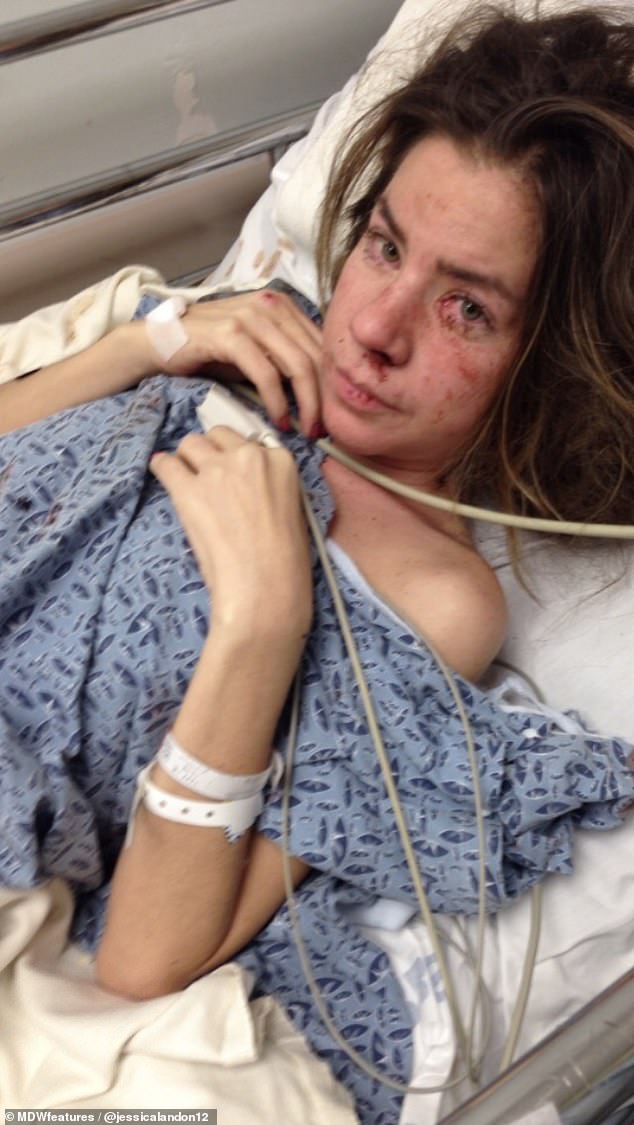 In 2012, Landon decided to get enter rehab but – after eight months sober, she relapsed in the beginning of 2013. Pictured: Landon in the hospital in 2014

‘I was an “in the closet” drinker…from the very start, rarely drinking in public or at parties but rather surreptitiously,’ Landon said.

‘Liquor was the magic medication I had been searching for, the only thing that could relieve me from my anxiety/panic and shame I felt on the inside.’

When Landon was five years old, she says she was molested by a babysitter, and she believes that even contributed to her drinking.

‘I, as a lot of children do, felt that I did something to cause it and that it was somehow my fault which I think contributed to my addiction,’ she said.

By age 26, Landon would drink so much vodka during the day that she would pass out at night and wake up violently shaking the next morning.

On a regular basis, she was also vomiting blood.

‘I met a woman that let me stay in her attic temporarily, and I stayed in the attic drinking 24 hours a day,’ Landon said.

‘I had become so weak and frail from living on strictly vodka for so long I ended up falling over the railing of a staircase and landed on my head, resulting in a massive brain hemorrhage.’

In the hospital, a CT scan revealed she had a baseball-sized hemorrhage that needed to be drained. 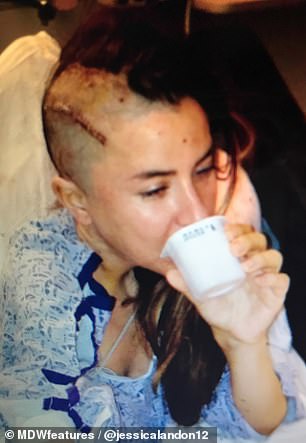 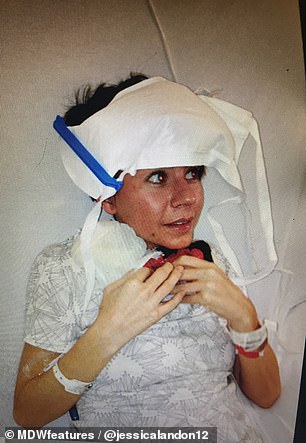 In 2013, Landon drunkenly fell over a stair rail and suffered a brain hemorrhage. She needed to be detoxed from alcohol first because her blood was too thin for surgery to be performed. Pictured, left and right: Landon in the hospital in 2013 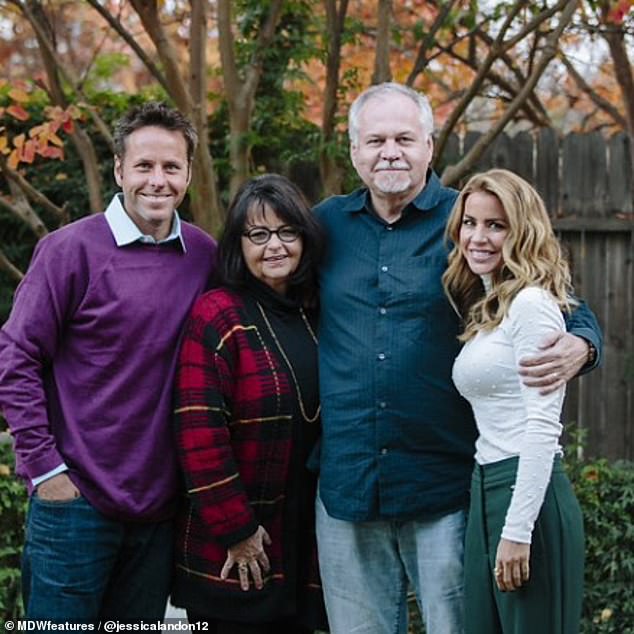 Landon recovered following brain surgery, but relapsed and ended up lying on someone’s floor in her own filth from being too weak to move. Pictured: Landon, far right with her family

However, first, she needed to be detoxed from the alcohol because her blood was too thin to do surgery right away.

Five days into the detox, Landon started having consecutive seizures so the doctors performed emergency brain surgery. Amazingly, she went into rehab and recovered.

But, no more than two months after recovering from her brain injury, Landon relapsed again and this time her return to alcohol was even more life-threatening than before.

She spent a month in prison for accruing several warrants – including a DUI and numerous public intoxications and – when she was released she was homeless again but found someone who said she could sleep on their floor.

‘I lay on his floor and nearly drank myself to death,’ Landon said.

‘I was incapable of getting up to use the restroom because I was too weak and atrophied, so I laid there urinating and defecating on myself for over a month in one spot.’

The acid from her urine was eating away the skin on my hips and tailbone, which ultimately caused a blood staph infection.

‘I knew I was dying rapidly and became desperate,’ Landon said. ‘I called an ex and begged for help. By the grace of God, she showed up the next morning with an ambulance.’

When she went to the hospital, her blood alcohol content was 0.533 – six times the legal limit someone is allowed to drink before driving.

All of her organs were failing and she weighed just 78 pounds. Landon received two immediate blood transfusions and was in the ICU for 16 days. 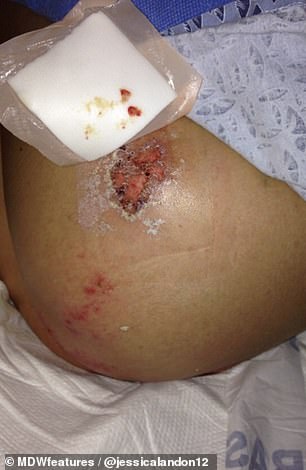 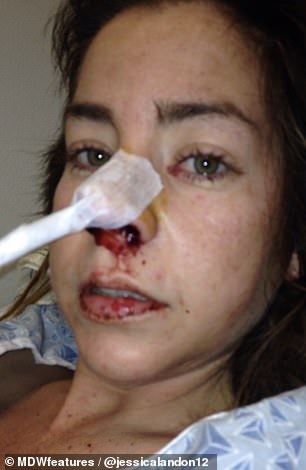 Landon was admitted to hospital in January 2014 with a blood staph infection as the acid in her urine ate away at her skin. She spent a month in the hospital regaining her strength before she was discharged to her parents’ care. Pictured, left and right: Landon’s skin being eaten away by the acid in her urine. 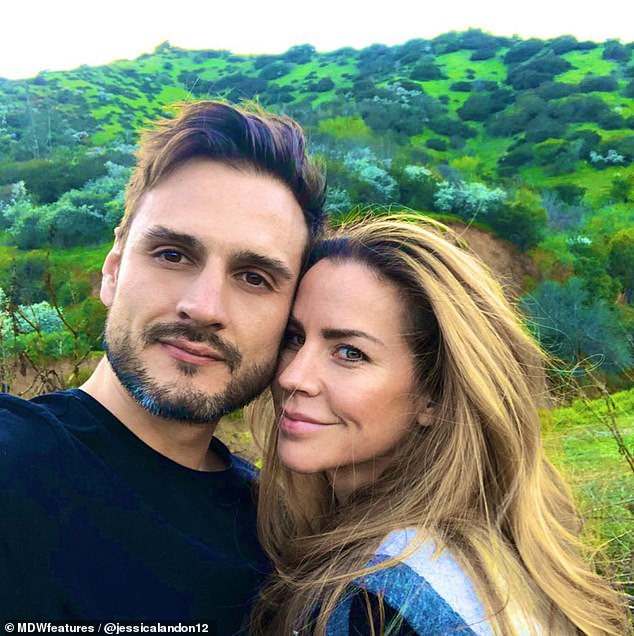 She now works as a recovery coach, has been sober for five-and-a-half years and is expecting her first child in December. Pictured: Landon, right, with her partner, Matthew

She stayed in the hospital for a month and learned how to walk again with physical therapy before going home with her parents.

‘That’s the best way to describe it for me. That is when the shift happened. The memory of pain stayed fresh in my mind and I did not want to go back to where I was,’ she said.

Landon has been sober since January 3, 2014. She’s now a healthy 105 pounds and expecting her first child with her partner, Matthew,in December.

She says she isn’t proud of her past, but she wants to ensure that alcohol consumption shouldn’t be glamorized and that others get the help they need.

‘Helping others is profoundly rewarding and it creates a sense of belonging which I think is healthy for the soul,’ Landon said.

‘I think sharing our stories with each other is very powerful and healing. Being broken down and cracked open – in whatever way – is such a blessing because the world needs people to be open.’