George Osborne at risk of breaching his deficit target for 2016

Chancellor George Osborne is just £7billion short of his overall deficit target with two months of the financial year to go.

Figures on public sector borrowing published today by the Office for National Statistics showed the current year deficit – the difference between what the Government has collected in revenue against what it spent – is £66.5billion.

To stay inside his targets for this year, Mr Osborne needs the deficit to be £73.5billion or less at the end of March.

The Chancellor was assisted by the figures showing an £11.2billion surplus for the month of January as the self assessment tax deadline passed.

The Treasury collected £200million more this January than a year ago.

Mr Osborne said today: ‘Today’s figures show that while the deficit is falling, there’s more to do.

‘We’ve learned there is no shortcut to fixing the public finances and when confronted with global economic turbulence, we can’t let up in taking the action necessary to build a resilient economy and deliver economic security for working people.

‘With warnings of a weaker outlook for the economy and the challenges for future tax receipts this could bring, we cannot be complacent in thinking the job is done.’

He said: ‘These are disappointing figures for George Osborne and show there is no room for complacency.

‘Instead of trying to distract us with self-imposed targets the Chancellor sets himself and never meets; he must act to better equip the UK economy in the face of a gloomy global outlook.

‘Only yesterday the OECD called on countries like the UK to increase infrastructure spending to support growth. It is by doing this that we can close the fiscal deficit and place the economy on secure foundations in a more sensible and sustainable manner.

‘This is why George Osborne needs to stop playing silly Westminster games and focus on solving the problems that leave the UK economy exposed to another shock, rather than cosying up to the bankers that caused the last one.’

UK economist at Capital Economics, Paul Hollingsworth, said the surplus was welcome for the Chancellor ahead of his Budget next month.

‘Admittedly, there is nearly always a surplus in January, thanks to payments of corporation and income tax receipts.

‘Nonetheless, this still leaves the Chancellor with some work to do over the next few months if he still wants to meet this forecast.

‘After all, he is left with around £7bn left to borrow in February and March – last year he borrowed almost £15bn.’

Overall net debt is now £1.581trillion, according to the latest figures.

Mr Osborne today warned there was ‘no shortcut’ to clearing the deficit but ahead of the Budget next month, the Chancellor has little room for manoeuvre 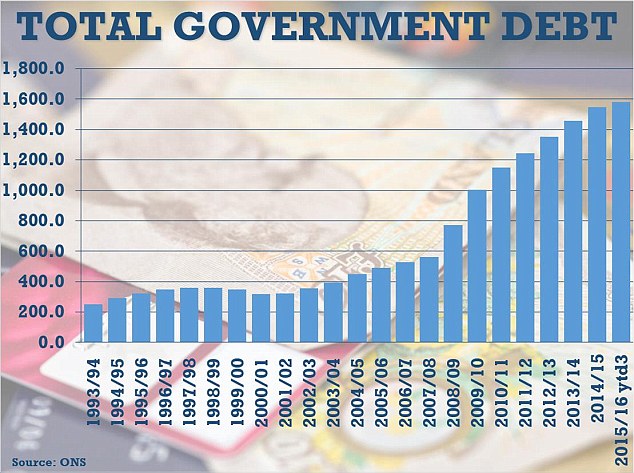 Total public sector debt now stands at £1,581trillion according to the latest figures from the Office for National Statistics today