Brave men from both sides of the pond have gone online to share the hilarious pranks they’ve played on their unsuspecting girlfriends.

The pictures, compiled by Bored Panda, see boyfriends getting their own back on the women in their lives in the craftiest of ways.

While one cheeky chap erected a plaque to document the moment he had finally won an argument with his wife, another practical joker swapped his girlfriend’s tennis racket for a pan.

Elsewhere, a daring dad made his loved one wish she hadn’t returned, when he greeted her with a huge ‘Welcome back from jail’ sign at the airport.

Brave men have gone online to share the hilarious ways they have pranked their unsuspecting girlfriends. American Reddit user i-realestate left a note attached to his girlfriend’s car window on a hot day, stating: ‘Please do not break the glass. The AC is on and she has coke zero and is watching Netflix’ 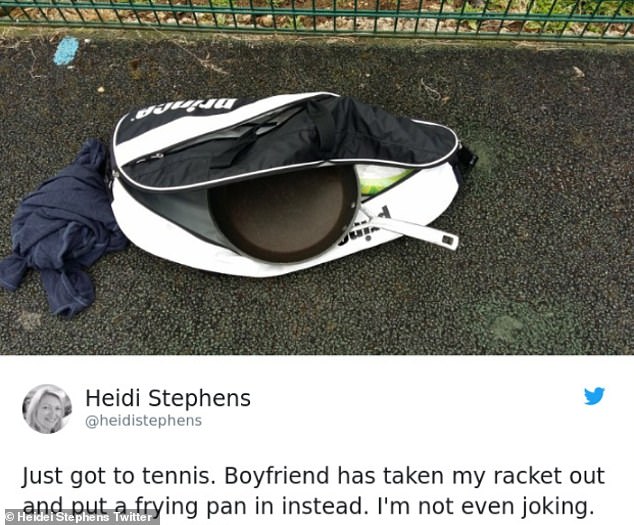 Meanwhile UK-based Twitter user Heidi Stephens was left enraged when she got to a tennis match only to find her boyfriend had swapped her tennis racket for a pan. She tweeted: ‘Just got to tennis. Boyfriend has taken my raccket out and put a frying pan in instead’ 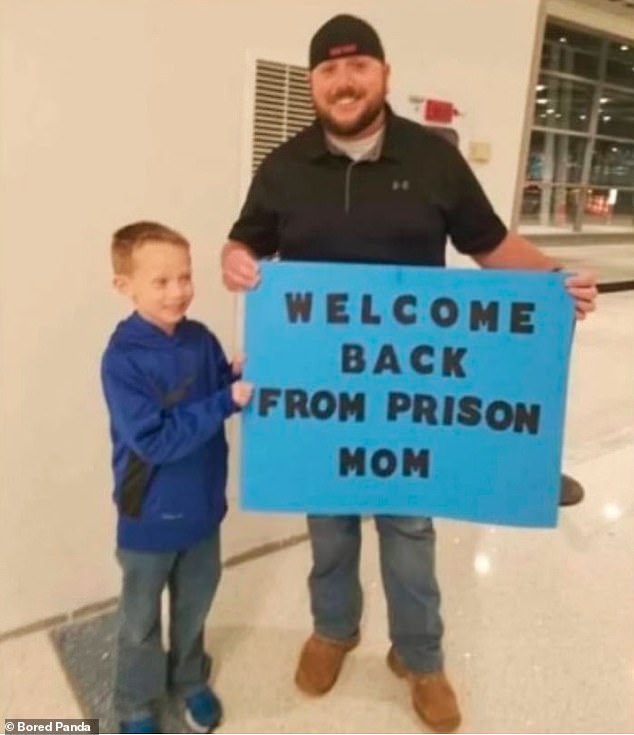 Elsewhere, an unknown American user decided to embarrass his shy wife, by greeting her with their son holding a ‘Welcome back from prison mom’ sign as they waited for her at the airport 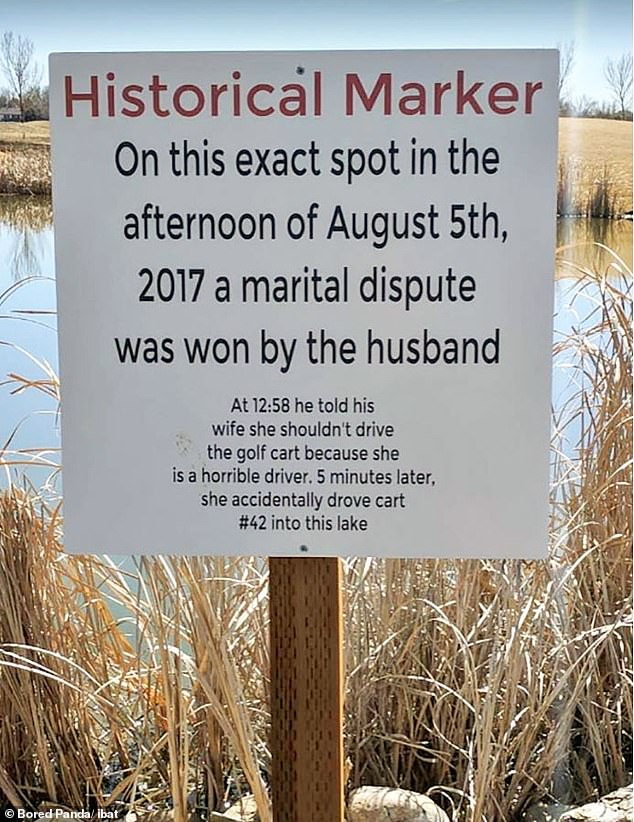 Meanwhile, triumphant Reddit user ibat created a sign of victory when he won an argument with his wife for the first time, explaining how she had accidentally driven a golf cart into the lake at that exact spot 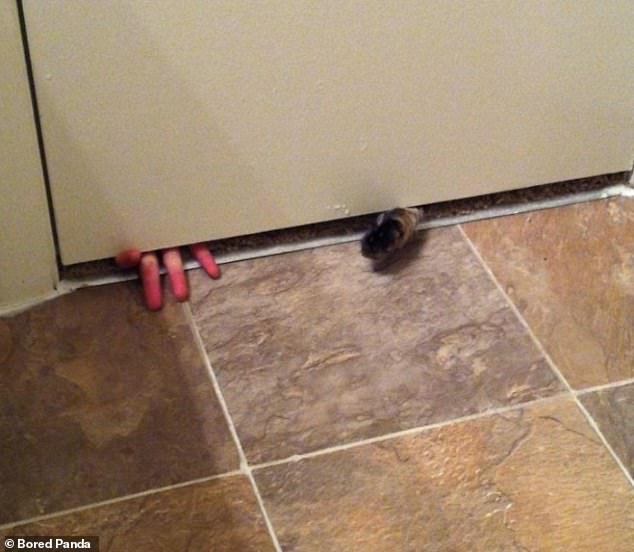 Elsewhere Arizona-based user Nancy joked that she had no privacy, sharing a picture of her boyfriend’s hand and cat’s paw poking through under the door, adding ‘Can’t a girl poop in peace?’ 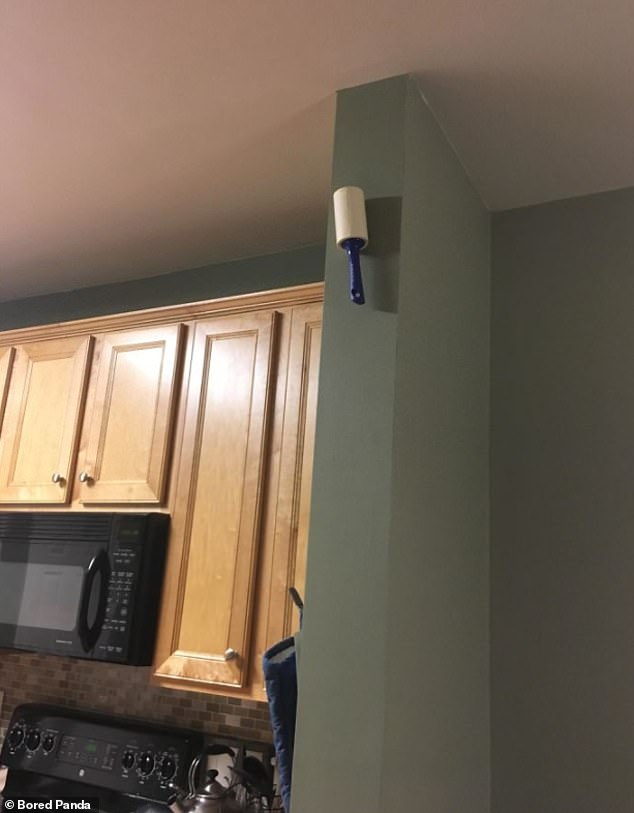 In another maddening post, Reddit user Kim from Kansas city shared a snap of a lint roller he other half had stuck to the top of a wall so that she couldn’t reach it 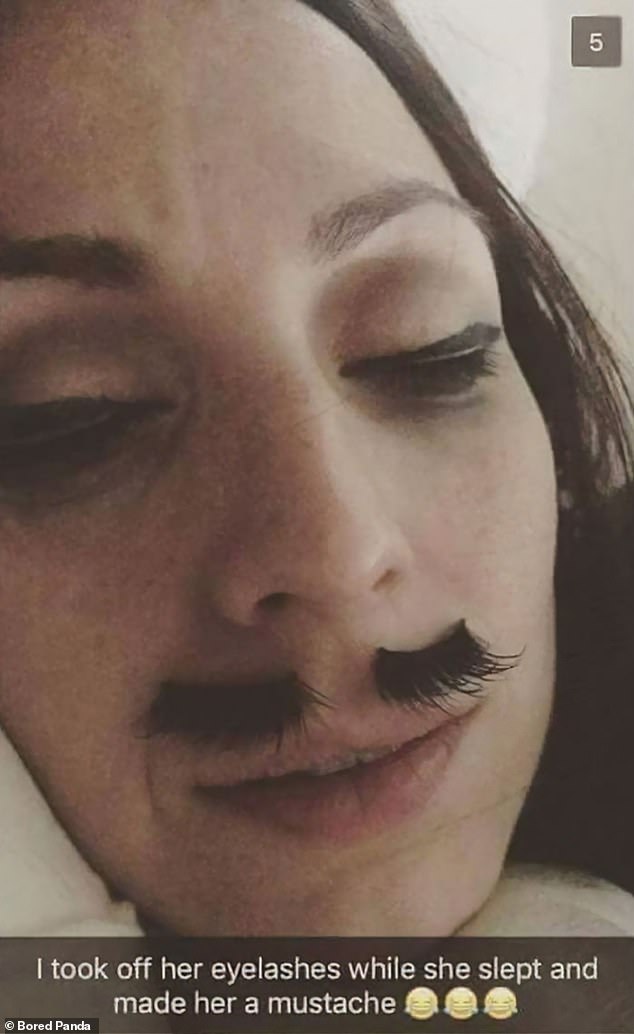 And one very cheeky boyfriend took to Snapchat, sharing a picture of his girlfriend with her lashes stuck to her upper lip, captioned: ‘I took of her eyelashes while she slept and made her a moustache’ 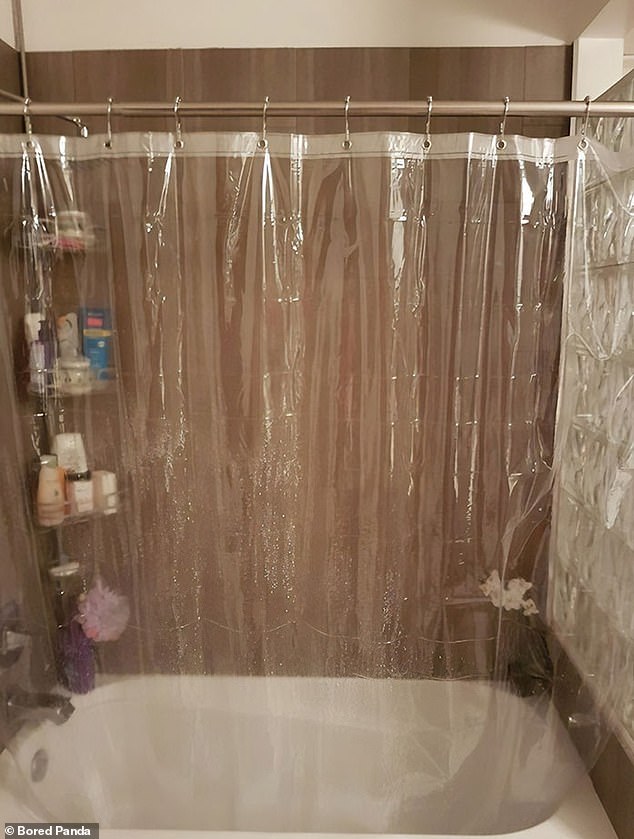 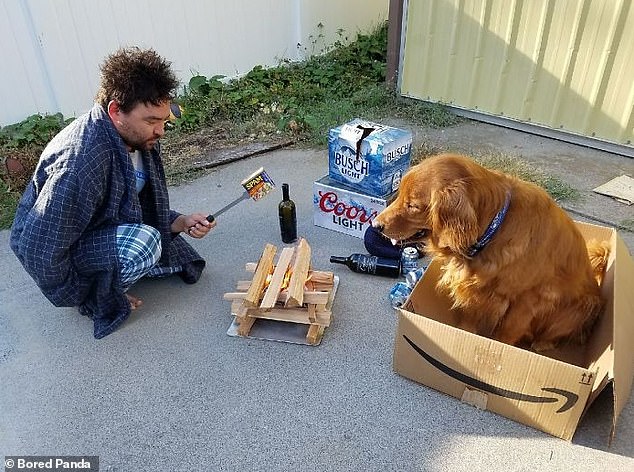 A US Reddit user by the name of Crybad showed just what happened when he was left to his own devices by his wife, appearing to fry Spam as his mournful dog watched from an empty Amazon box 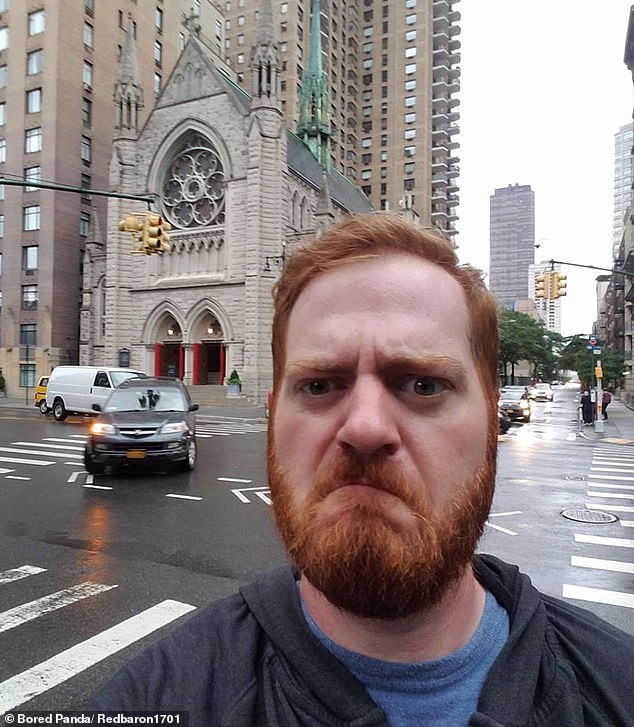 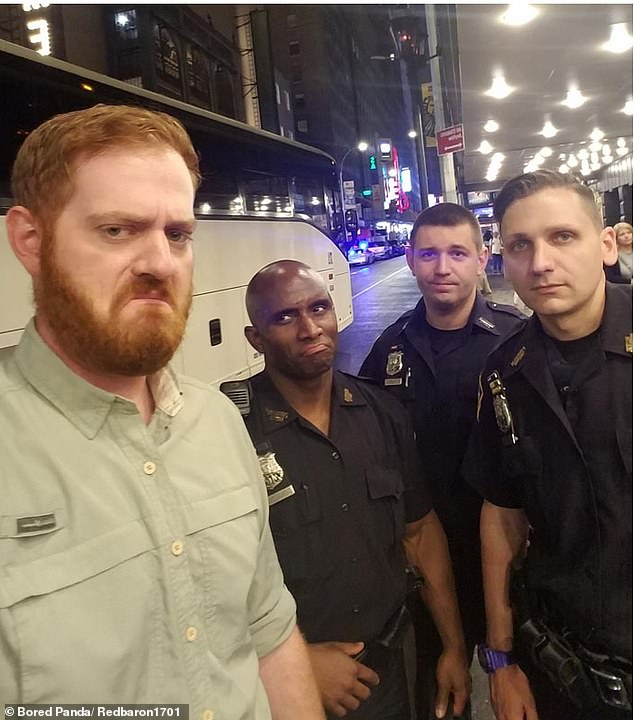 A hilarious user by the name of Redbaron1701 revealed he was sent to New York on business and was banned from having fun by his wife, so decided to send her a collection of unhappy tourist selfies from around the city 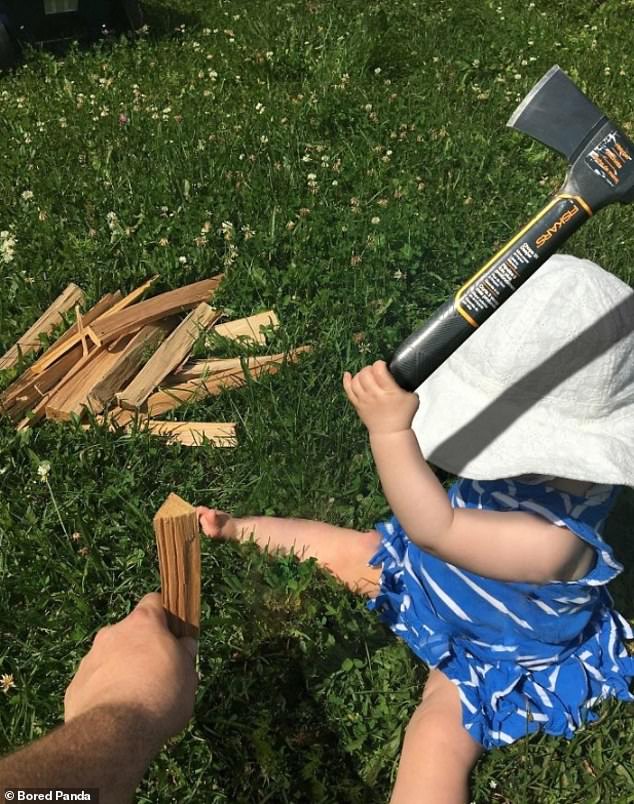 One brave Reddit user admitted he was a dab hand at photoshop so sent his worried wife a picture of their baby daughter appearing to wield an axe, in response to her messages asking how they were getting on 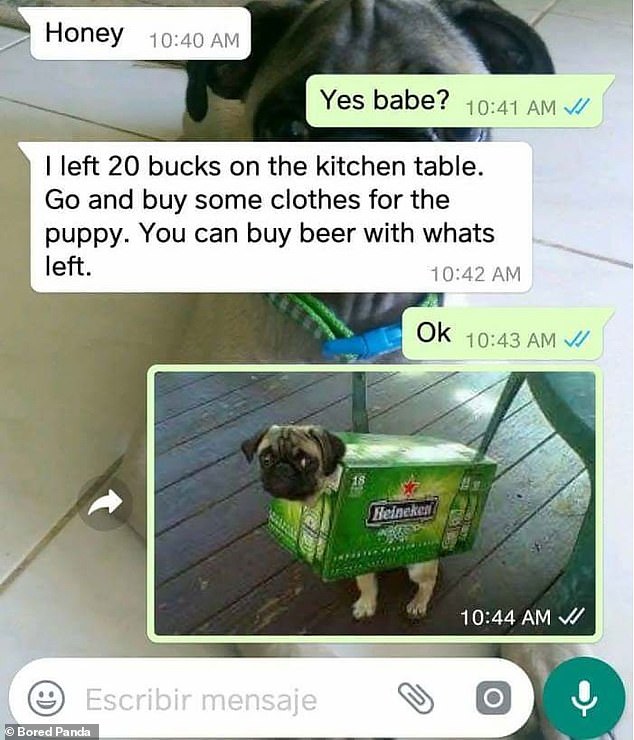 Meanwhile, one wife responded with sass when her US Reddit user husband told her he had left her $20 to buy clothes for their puppy and beer – responding with a picture of a dog in an empty beer case 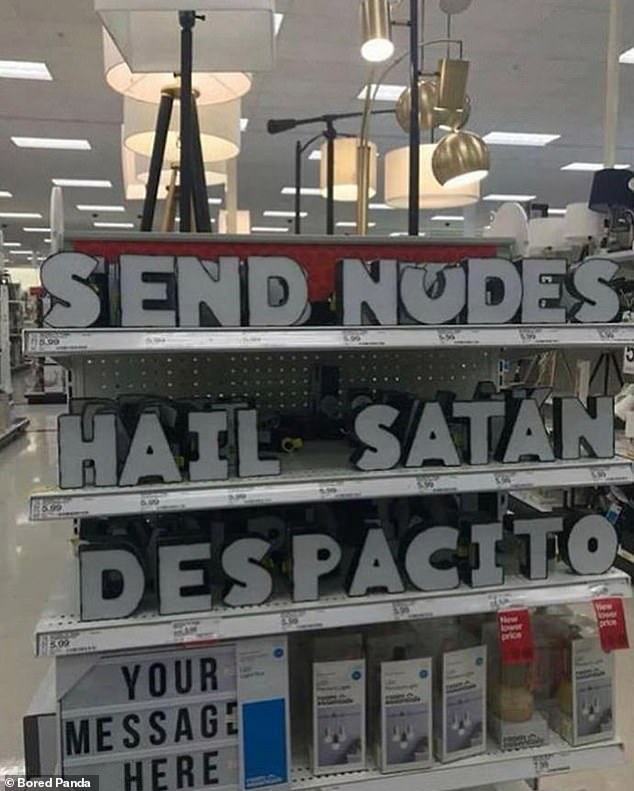 Another Reddit user snapped a message left presumably by a bored husband by rearranging letters for sale into words, including ‘send nudes’ and ‘Despacito’ – the title of the Justin Bieber song 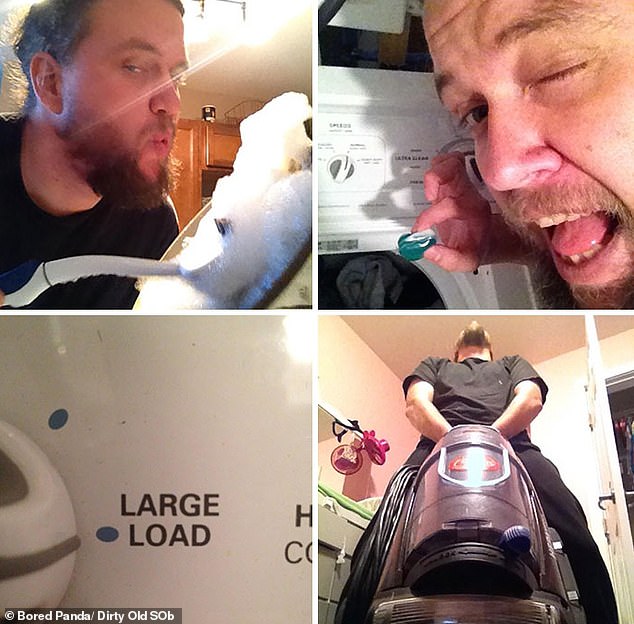 Twitter user Elaine Brown was hysterical with laughter when she hid under the bed to scare her boyfriend while he was in the bathroom, only to witness him running into the closet to wait to scare her