A grandmother, whose three-year-old grandson died from brain cancer after he was misdiagnosed with a sprained ankle, has launched a petition to fund research into childhood cancer.

The toddler’s family became concerned when they noticed Logan was walking with a limp on his right leg in October 2016.

Logan’s family took him to their local practice, but were given no answers and claimed doctors diagnosed the three-year-old with a sprained ankle.

Following three visits to A&E at Crosshouse Hospital, Kilmarnock, a consultant noticed a corresponding weakness in his arm on the same side, known as hemiplegia.

Speaking to FEMAIL, Fiona said: ‘He started walking with a limp and it was assumed he had a twist or sprain – ankle was mentioned first then possibility of it being his hip.

‘It was an A&E consultant at outpatient clinic who noticed a corresponding weakness in the arm on the same side and arranged for him to go in for scans.

‘The tumour in fact was not generating the message to flex his ankle up to bring his foot through so he was kind of swinging his leg round rather than lifting it properly. 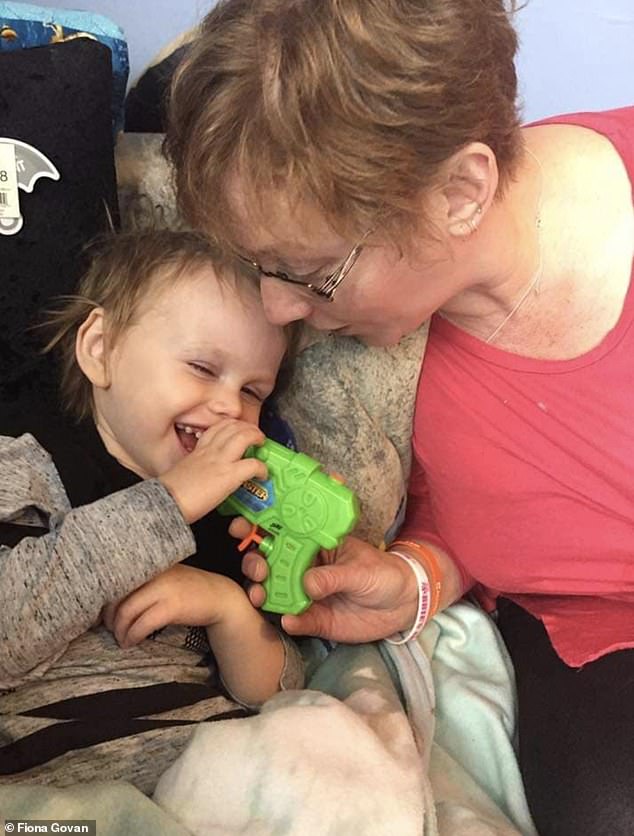 Fiona Govan (right), 50, from Dalry, North Ayrshire, Scotland, was left heartbroken after her grandson died in 2016

‘Logan’s was not the most usual of presentations and it was diagnosed after a number of other possible diagnoses were ruled out.

‘However with DIPG, early diagnosis makes no difference – you just get to know sooner your child or grandchild will die.’

Logan underwent CT and MRI scans and on December 6, grandmother Fiona and mother Sapphire Maclean, 29, were given the heartbreaking news that he had incurable cancer.

The toddler passed away in his mother’s arms at home in, Largs, Ayrshire, on October 17 2017, following six weeks of radiotherapy. 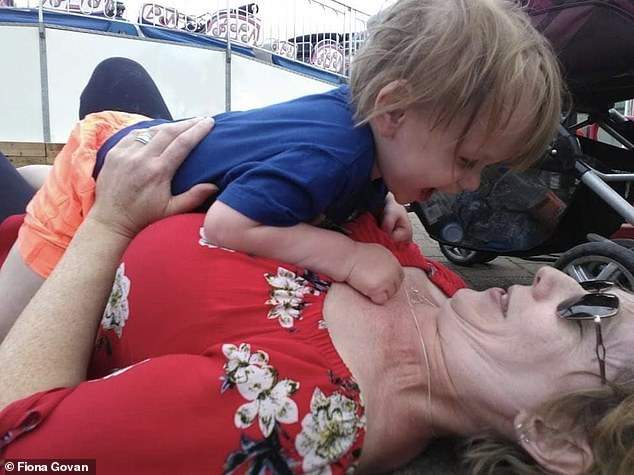 The family were granted a trip to Croatia with Make a Wish and visited Calum’s Cabin, a retreat on the Isle of Bute for children with cancer, to create memories with Logan (pictured with Fiona)

And now Fiona, who is also grandmother to three-year-old Ezra, has started a petition to fund research into childhood cancers with the worst survival rate.

The petition has garnered more than 80,000 signatures, and needs 100,000 before it can be considered for debate in Parliament.

Fiona says she hopes the petition meets three goals that would prevent other families experiencing the same heartbreak.

She explained that she is hoping funding for children’s cancers can be ring-fenced with a proportion going towards research and data on cancer funding to be more transparent. 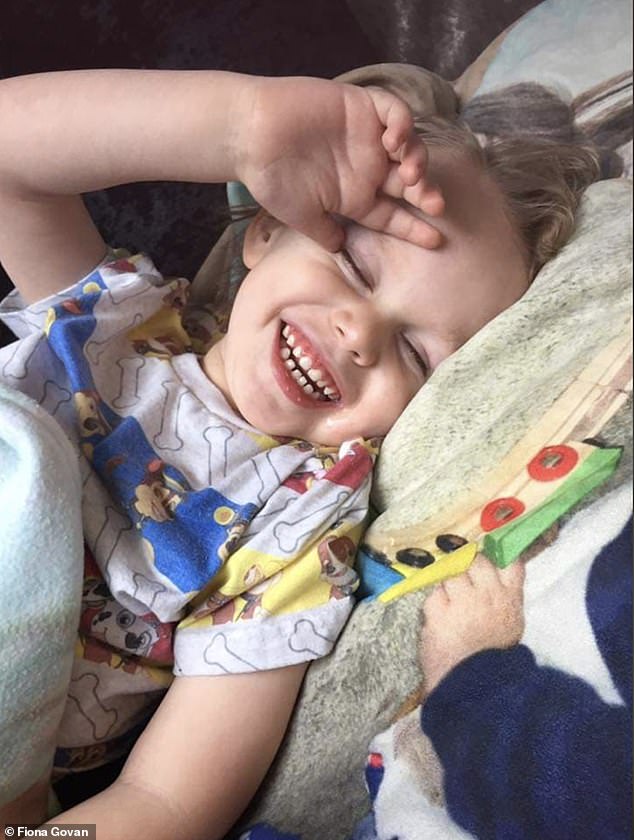 Fiona described of the devastating effect of losing a child and revealed how the petition aims to prevent other families from going through what they have.

Talking to the Daily Record, Fiona said: ‘When you lose a child, you are losing 70 years of life they could have had, it isn’t right.’

Fiona spoke of how she was ‘grieving’ while Logan was still alive because of the terminal diagnosis.

However she never believed her grandson would die and said: ‘You have this vague awareness of it but you assume it won’t happen to you and the child won’t die.’

Diffuse intrinsic pontine glioma (DIPG) is a rare type of brain tumour that can’t be operated on because of its location within a crucial part of the brain, called the pons.

This area is responsible for a number of critical bodily functions, such as breathing, sleeping and blood pressure.

The high-grade brain tumour, which mostly affects children, tends to grow quickly and often spreads to other parts of the brain or spinal cord.

Most diagnoses occur in youngsters between the ages of five and 10. The cause of the tumour remains unknown.

More than 90 per cent of its victims will die within 18 months of diagnosis, according to figures.

Fiona described the ‘difficult moment’ after the family learned Logan has other tumours growing in his brain and would not have a second radiation course to enable the family another Christmas together.

In 2017 the family launched a similar petition but were left disheartened when it did not gain enough signatures.

The doting grandmother revealed how Logan was a ‘lovely wee soul’ who loved reading stories and playing with dinosaurs.

She said: ‘He was mischievous at times, he loved to tease others and to be teased and tickled. 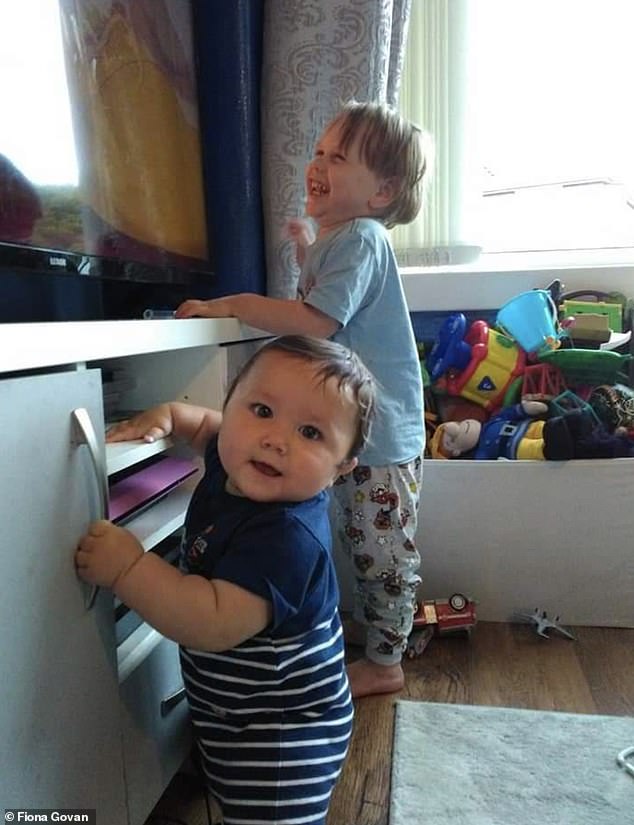 ‘He loved dinosaurs, playing in water, jumping in puddles, throwing stones in and putting himself in it too!

‘Logan is a much loved little boy who should have had his whole life ahead of him and a big brother his little brother needed. He is missed every day.’

The family were granted a trip to Croatia with Make a Wish and visited Calum’s Cabin, a retreat on the Isle of Bute for children with cancer, to create memories with Logan.

Fiona spoke of how Logan retained his sight and hearing but lost a lot of movement towards the end.

She praised the care that Logan received and added: ‘The care he received on diagnosis was outstanding, including facilitating the families wishes about Logan’s death at home (his outreach nurse was with us throughout the final 24 hours).’

She added: ‘No one should have to go through this, I want to do all I can to help.’

Hugh Adams, spokesman for the charity Brain Tumour Research, said: ‘Our hearts go out to Fiona and to all of Logan’s family whose world has been shattered by this cruellest of cancers.

‘We would urge anyone and everyone to get involved and to make a difference by signing this petition. It is vital that we continue to raise awareness of the shocking lack of investment for research into this disease.

‘Brain tumours kill more children and adults under the age of 40 than any other cancer yet, historically, just 1 per cent of the national spend on cancer research has been allocated to this devastating disease.

‘It is unbearable to think that, here in the UK, one child every fortnight is diagnosed with DIPG.

‘We owe it to all of these families to give them hope and the only way we can do that is by increasing investment in research in order to improve patient outcomes and, ultimately, find a cure.’