First Lady Jill Biden spent Mother’s Day at the Slovakia-Ukraine border, meeting and offering support to Ukrainian mothers and children who have been displaced by Russia’s invasion, after telling President Biden, ‘I can’t just sit by and do nothing.’

The First Lady said in an interview that aired Saturday that the resilience and strength of the refugees who kissed their loved ones goodbye while their country was being attacked inspired her to help — and that she needed to ‘go stand with the mothers of Ukraine’ on Mother’s Day.

‘Like most Americans watching the TV, we saw all those mothers gathering their children, kissing their husbands goodbye, and then leaving the country,’ Biden told MSNBC’s Symone Sanders.

‘And it just was so emotional and just so heart-wrenching. And I said to Joe, “I can’t sit by, I just can’t sit by and do nothing.”‘

Biden traveled to Romania first where she spent Friday and Saturday visiting with U.S. troops and meeting with Ukrainian refugee families.

Biden told MSNBC’s Symone Sanders that watching the refugees being torn from their families while fleeing their country during the invasion ‘was so emotional and just so heart-wrenching. And I said to Joe, “I can’t sit by, I just can’t sit by and do nothing”‘ 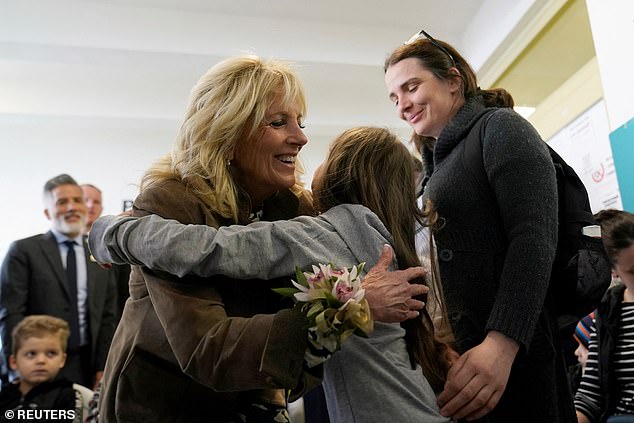 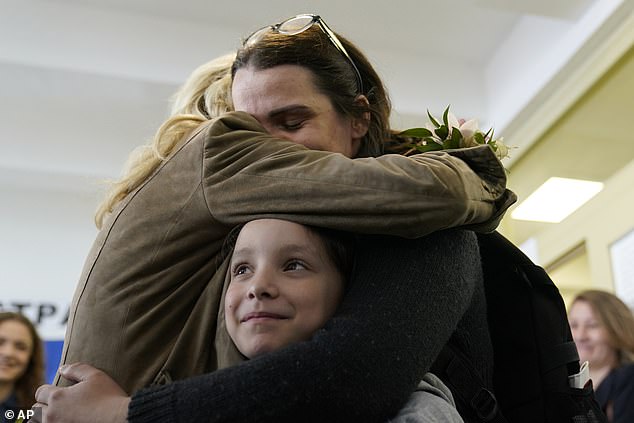 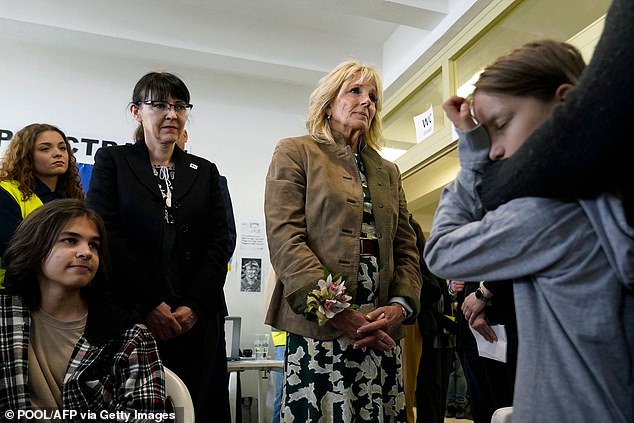 In the interview, Biden also told Sanders that she has spoken with the First Lady of Poland about a list of things they need assistance with.

‘They need so much,’ Biden told Sanders. ‘You know they have so many children without parents, you know, so many orphans that need childcare, that need clothing, that need…health supplies, I mean they need food.’

Biden is on a four-day trip to Eastern Europe to highlight U.S. support for Ukrainian refugees and for the allied countries, including Romania and Slovakia, that are providing a safe haven for them.

The trip, which is the most high-profile one to date taking by the first lady, is only her second solo overseas trip. Last summer she went to Tokyo to cheer on U.S. athletes at the Olympic Summer Games.

At a bus station in the city of Kosice that is now a 24-hour refugee processing center, Biden found herself in an extended conversation with a Ukrainian woman who said she struggles to explain the war to her three children because she cannot understand it herself.

‘I cannot explain because I don’t know myself and I’m a teacher,’ Viktoriia Kutocha, who had her arms around her 7-year-old daughter, Yulia, told Biden.

At one point, Kutocha asked, ‘Why?’ seeming to seek an explanation for Russia’s decision to invade Ukraine on Feb. 24.

´It’s so hard to understand,’ the first lady replied.

The 24-hour facility is one of six refugee centers in Slovakia, providing an average of 300 to 350 people daily with food, showers, clothing, emergency on-site accommodations and other services, according to information provided by the White House. 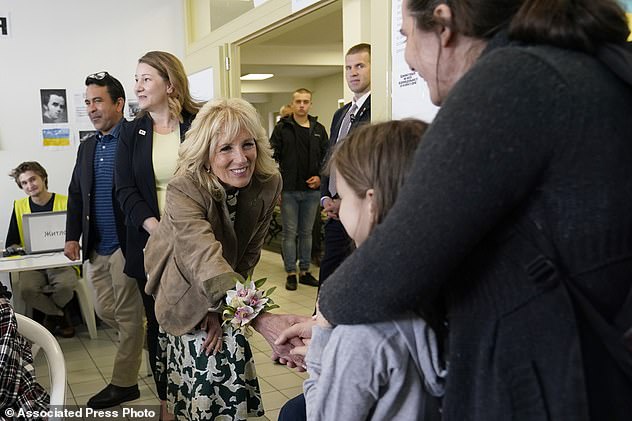 Biden, wearing a flower corsage on her wrist – a Mother’s Day gift from President Joe Biden – also dropped in at a Slovakian public school that has taken in displaced students.

Slovakian and Ukrainian moms were brought together at the school for a Mother’s Day event while their children made crafts to give them as gifts.

Biden went from table to table meeting the mothers and kids. She told some of the women that she wanted to come and ‘ say the hearts of the American people are with the mothers of Ukraine.’

‘I just wanted to come and show you our support,’ she said before departing for the border village of Vysne Nemecke to tour its border processing facility. 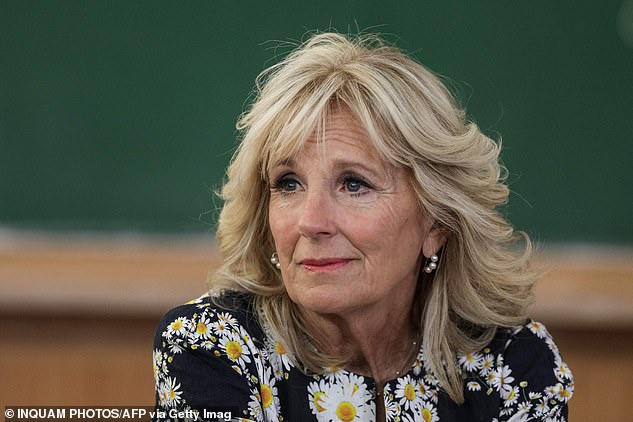 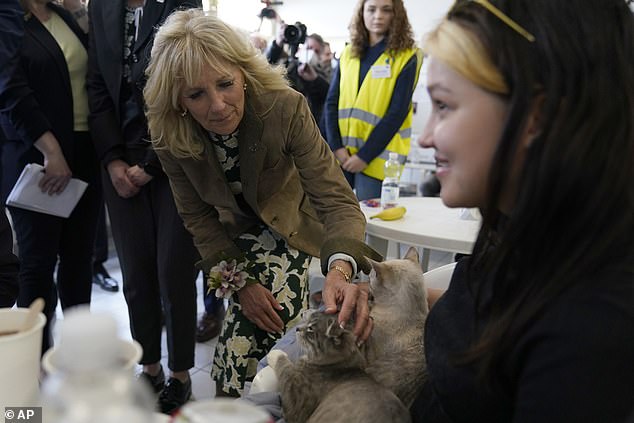 First lady Jill Biden visits with people at a city-run refugee center in Kosice, Slovakia, Sunday, May 8, 2022, for Ukranian refugees as they rest and prepare for onward travel. Biden will then travel to the Slovak border with Ukraine to meet with refugees

At the border village, Biden surveyed operations set up by the United Nations and other relief organizations to assist Ukrainians seeking refuge in Slovakia. She attended a religious service in a tent set up as a chapel, where a priest intoned, ‘We pray for the people of Ukraine.’

In recent weeks border crossings are averaging less than 2,000 per day, down from over 10,000 per day immediately following Russia’s further invasion of Ukraine, and a large portion of that flow is daily cross border traffic.

Biden fought back tears on Saturday as she heard heartbreaking stories from Ukrainian refugees about fleeing their homeland and she warned the humanitarian crisis could get worse.

Among the stories the first lady heard during her visit to a public school in Romania, which has taken in refugees, was one from seven-year-old Mila of Kyiv, who told Biden: ‘I want to return to my father.’

The 90-minute visit was filled with joy in addition to the sorrow. In addition to hearing the anguishing stories, Biden also laughed with the kids during their art projects, handed out presidential M&Ms, and gave hugs. 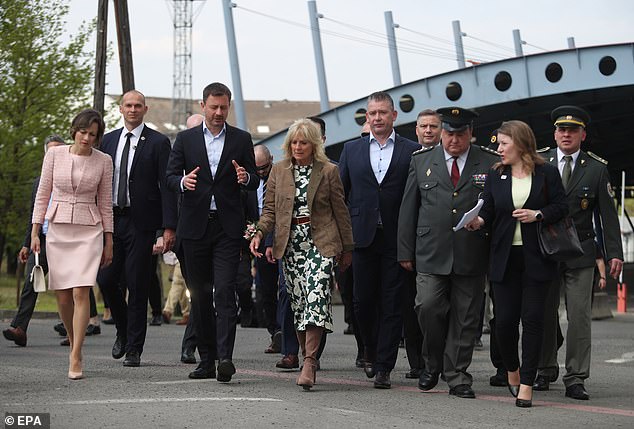 S First Lady Jill Biden (C) with Slovak Prime Minister Eduard Heger (3rd L) at the Slovak-Ukraine border crossing in Vysne Nemecke, Slovakia, 08 May 2022. Jill Biden is currently on a tour of the region to meet with displaced Ukrainians, NGO workers and volunteers 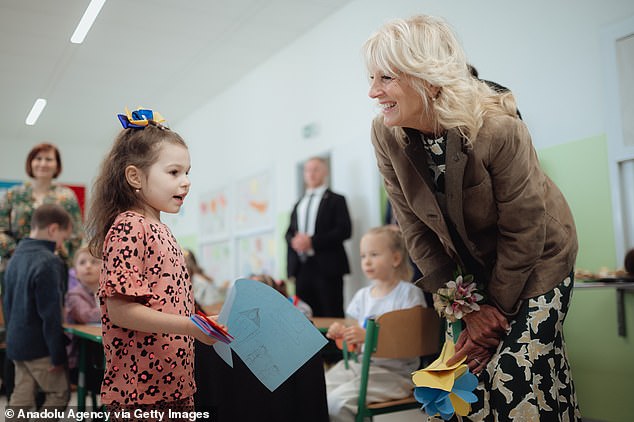 Biden arrives at a primary school on Tomasikova street, Kosice, Slovakia on Sunday

But she appeared anguished at times when she sat down with a group of Ukrainian women who described the trauma of trying to rebuild their lives in a new country.

Anastasia Konovalvoa, a Ukrainian teacher who fled in March to Romania, told the first lady her only thoughts were saving her child.

‘I crossed the border with my three-year-old son and everything I was thinking about was how to save my child from a city that was bombed,’ she said. ‘Thank god the Romanian people were here.’

Biden told her: ‘We stand with you. I hope you know that.’

She praised the women for being strong.

‘I think mothers will do anything for their children … I think you’re amazingly strong and resilient,’ Biden said. ‘It’s just amazing that the Romanian people have taken you into their homes and into their hearts.’ 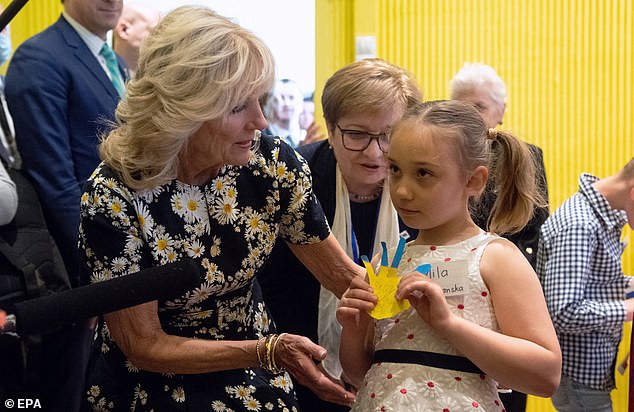 Jill Biden met and heard from seven-year-old Mila of Kyiv, who told the first lady: ‘I want to return to my father.’ 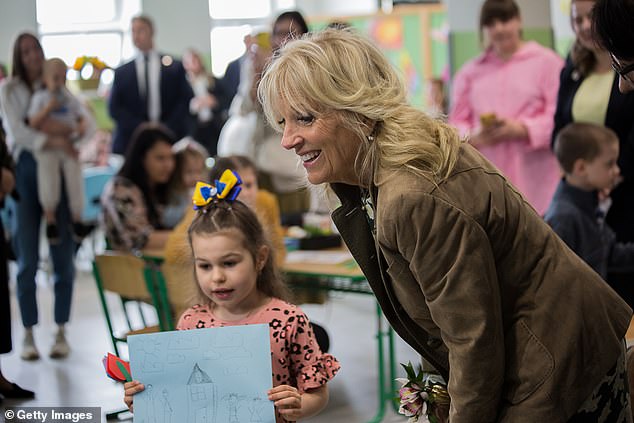 , Jill Biden speaks with Ukrainian children who fled to Slovakia following the Russian invasion of Ukraine on Mother’s Day at Primary School Tomasikova 31 on May 8 in Kosice, Slovakia

The first lady appeared on the verge of tears as she listened to the refugees’ stories.

Almost 6 million refugees have fled Ukraine since Russia invaded on February 24, according to the United Nations. Nearly 7,000 are entering Romania a day with roughly 900,000 total having come to Romania thus far, though many have continued on to other countries.

‘Wasn’t it heartbreaking?,’ Biden told reporters traveling with her of the visit. ‘The little girl that said her wish was to be with her daddy, and then another said my wish is to go home, and then you can see it those children really have suffered.

She said she was worried the humanitarian crisis, which is being called the worst since World War II, will continue to grow.

‘We wake up every morning and think ‘this has to end,’ but it still keeps going on and on,’ she said.

She described her visit to the Scoala Gimnaziala Uruguay in Bucharest as ‘amazing’ and ’emotional.’

She visited the school, which is hosting two classrooms of refugees aged 5-15 years, with Romanian first lady Camen Iohannis.

Support at the school is being provided by the Romanian government, UNHCR, UNICEF and Save the Children.

‘I’m very grateful that you took the time and made the effort to visit us,’ Iohannis told her. ‘Sticking together, being united is very important to us.’ 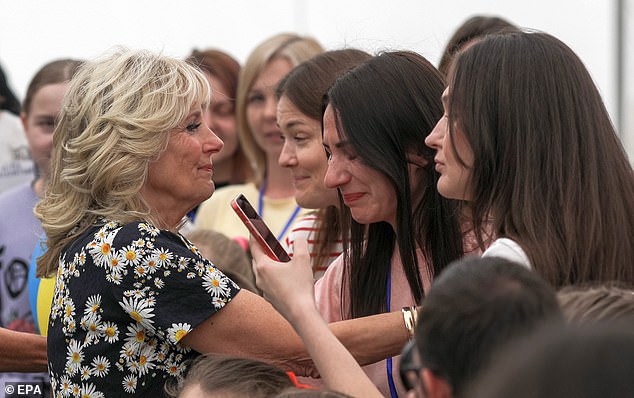 During her 90 minute visit to the school, Jill Biden offered hugs and posed for selfies 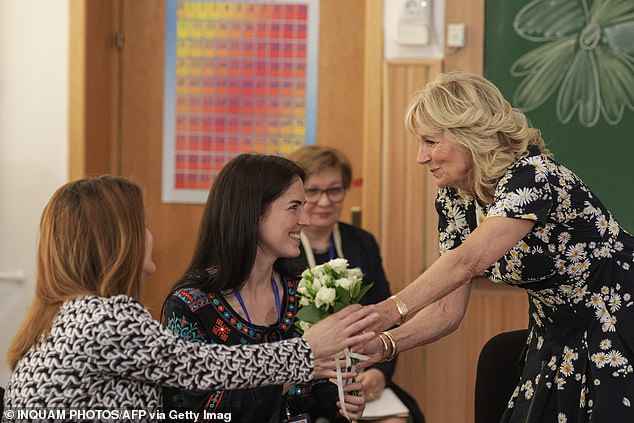 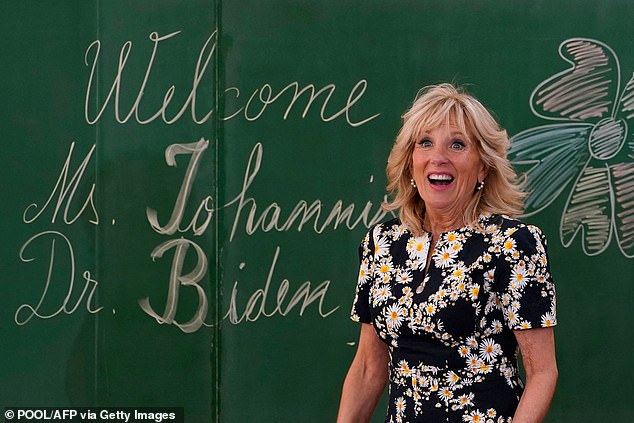 During her school visit, Biden dispensed with hugs and posed for selfies. She handed flowers to the Ukrainian mothers ahead of Mother’s Day.

And she gave ‘Heidi Junior’ chocolate bars and Air Force One M&Ms with President Biden’s signature to the children.

In addition to hearing their stories, she asked the kids what they wanted to be when they grew up.

She also watched them do arts and crafts projects – the children were tracing their hands and cutting them out on paper printed with Ukrainian and Romanian flags. They wrote messages of hope on paper butterflies.

She and Iohannis also were treated to a performance: students sang the Romanian national anthem and then a Ukrainian military march song.

In a briefing with UN officials, Biden, a teacher, asked about the mental health services and schooling available to children.

She was told they need more counselors and need to continue to train teachers to be able to assist students with trauma.

She tied her trip to Mother’s Day weekend with the focus being on the the Ukrainian families who have suffered since Vladimir Putin invaded their country.

Her daughter Ashley, was scheduled to travel with her but dropped out of the trip after a close contact with a person who tested positive for covid. Ashley has tested negative.