Live animal testing in England, Scotland and Wales falls to its lowest level since 2007

Live animal testing in the United Kingdom has fallen to its lowest level since 2007, with 3.4 million procedures carried out in 2019, a Government report has revealed.

Home Office data covering universities, research firms and governmental labs revealed that the number of procedures undertaken last year was 3 per cent smaller than in 2018.

Around half — 1.73 million — of the procedures were experimental, while the rest — 1.67 million — involved the creation and breeding of genetically altered animals.

The majority of procedures involved mice, fish and rats, which have been the most commonly employed experimental animals in the last decade.

Live animal testing in the United Kingdom has fallen to its lowest level since 2007, with 3.4 million procedures carried out in 2019, a Government report has revealed (stock image)

‘We have seen a steady decline in the number of procedures involving experimental animals, particularly during the last four years,’ said Dominic Wells, the chair of the Animal Science Group at the Royal Society of Biology.

‘This may reflect the increased use of alternatives to animals or a reduction of funding for animal research.’

‘It is also important to note that the majority of procedures — approximately 80 per cent —  are either mild, sub-threshold or non-recovery, which indicates minimal animal suffering in the majority of cases.’

In addition, the report noted that some animals can be used for multiple tests, depending on the circumstances, meaning that the number of procedures carried out in a year does not equal the actual number of animals involved.

Of the experimental procedures, 57 per cent were carried out as part of basic research, mostly focusing on the immune system, nervous system and cancer.

Records indicate that the use of literal lab. rats in experimental procedures has fallen by around 5 per cent since 2018 — and almost halved when compared with their levels of use a decade ago.

In 2019, there were 130 experiments on cats undertaken in Britain, a drop of around 18 per cent from the preceding year and 30 per cent as compared to a decade ago.

The most notable decreases highlighted in the report, however, involved the use of primates and dogs — by 39 and 27 per cent, respectively.

These majority of these two animals were used to test the safety of products and devices for human medicine, dentistry and veterinary medicine. 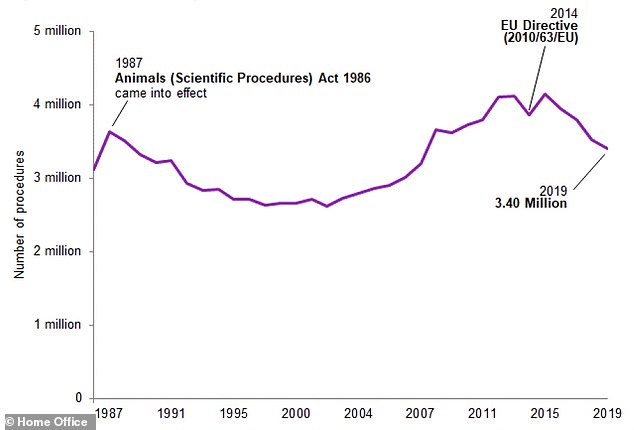 Home Office data universities, research firms and governmental labs revealed that the number of procedures undertaken last year was 3 per cent smaller than in 2018. Pictured, the annual number of animal tests undertaken in the UK from 1986–2019 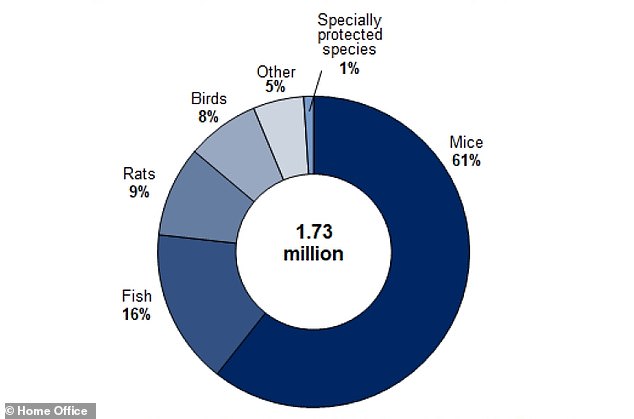 The majority of procedures involved mice, fish and rats, which have been the most commonly employed experimental animals in the last decade. Pictured, the breakdown of the animals used in laboratory experiments in the United Kingdom in 2019

The number of experimental procedures involving horses has remained at a similar level to 2017, with 77 per cent of such procedures being carried out for the routine production of blood-based products used for a variety of diagnostic purposes.

Cats, dogs, horses and primates are categorised as being ‘specially protected species’ for scientific research and are subject to additional protection under Section 5C of the Animals (Scientific Procedures) Act of 1986.

To hold a licence to use these animals, investigators first must demonstrate that no other species are suitable for their research, alongside adhering to other conditions.

Specially protected species accounted for 1 per cent of procedures last year — or some 18,000 experiments.

Since 2014, the Home Office — which is responsible for regulating animal experiments — has classified testing by the amount of suffering it causes.

Around 91 per cent of experimental and 98 per cent of breeding procedures performed last year were assessed as ‘sub-threshold’ (discomfort measured as less than a needle prick), ‘mild’ (equivalent to a needle prick) or ‘moderate’ in severity.

The remainder were classified as being either ‘severe’ or ‘non-recovery’, in which the animals do not wake up after being given anaesthesia. 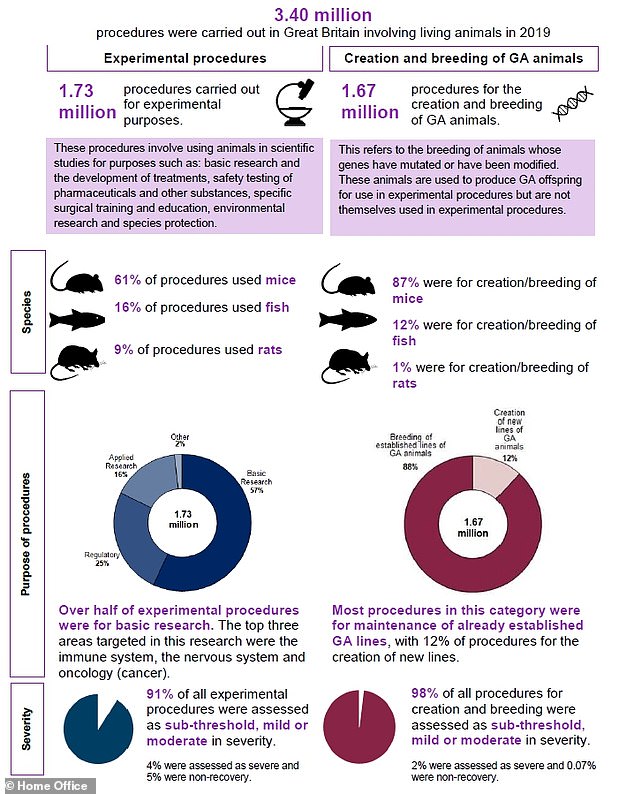 Around half — 1.73 million — of the procedures were experimental, while the rest — 1.67 million — involved the creation and breeding of genetically altered animals. Pictured, the Home Office summary of the nature and severity of the animal tests undertaken in 2019

Meanwhile, data released by the membership organisation Understanding Animal Research — which promotes openness around animal testing — has revealed that 10 organisations accounted for nearly half of Britain’s animal research in 2018.

More than 99 per cent of these experiments were carried out on rodents or fish.

Although the figures in the report predate COVID-19, the pandemic has highlighted how important animal research is for the development of new drugs and vaccines, said Understanding Animal Research’s chief executive Wendy Jarrett.

‘Over the last six months, we have witnessed researchers from across the world work tirelessly to develop new treatments and vaccines for COVID-19, which it is hoped can prevent thousands of further deaths,’ she added.

‘Existing drugs, developed using animals, have also been found to be effective against the virus.’

‘Remdesivir, an anti-viral drug that was initially developed using monkeys to treat Ebola, is being used to treat severe cases of COVID-19.’

‘Dexamethasone, a steroid originally developed using animal research to treat rheumatoid arthritis, has been found to save the lives of some patients on ventilators,’ she continued.

‘Research involving commonly used animals like rodents — and more unusual animals like llamas, alpacas, bats and hamsters — has also yielded important information on how COVID-19 can be treated.’

The full findings of the study were published on the UK Government website.

THE LEVELS OF ANIMAL TESTING

Scientific experiments done on live animals are classified by their severity.

There are five categories which each experiment fits in to.

When a procedure did not actually cause suffering above the threshold of regulation, i.e. was less than the level of pain, suffering, distress or lasting harm that is caused by inserting a hypodermic needle according to good veterinary practice.

When the entire procedure was carried out under general anaesthesia without recovery.

The animal never woke up after going under the influence of the anaesthetic and died.

Any pain or suffering experienced by an animal that was, at worst, only slight or transitory and minor so that the animal returns to its normal state within a short period of time.

The procedure caused a significant and easily detectable disturbance to an animal’s normal state, but this was not life threatening.

Most surgical procedures carried out under general anaesthesia and with good post-operative analgesia (i.e. pain relief) would be classed as moderate.

The procedure caused a major departure from the animal’s usual state of health and wellbeing.

This would usually include long-term disease processes where assistance with normal activities such as feeding and drinking were required, or where significant deficits in behaviours/activities persist.

It includes animals found dead unless an informed decision can be made that the animal did not suffer severely prior to death.