The London-based firm previously raised £22million in April, when the housing market was temporarily shut, to help it survive the coronavirus crisis.

But since then demand has been turbo-charged by the stamp duty holiday and a rush of buyers looking for bigger homes after the spring lockdown, with revenues up by 2 per cent in October and November compared to last year.

Foxtons previously raised £22m in April, when the housing market was temporarily shut, to help it survive the coronavirus crisis

That means Foxtons’ finances are in much better shape than it expected and bosses have decided to spread some festive cheer.

Yesterday they said the company had decided to return cash it no longer needed ‘to shareholders whose support we appreciated at a time of great uncertainty’.

It has already spent £4.6million of what it raised on acquisitions.

But after keeping what it needs for further takeovers and potential Covid-19 disruption, it has £3million of spare change to spend on a share buyback scheme – starting with immediate effect. Shares rose 2.7 per cent, or 1.2p, to 45.2p following its announcement. 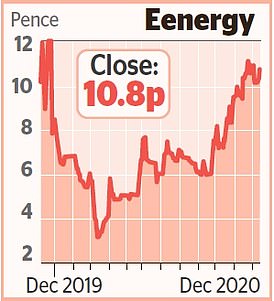 Shares rose in energy technology provider Eenergy Group after it announced the takeover of a rival.

The firm is buying Beond Group for £8.2million, which includes £1.7million it is paying in cash and £6.5million of shares it will issue.

Eenergy, which sells software that helps clients manage their energy usage, said Beond would boost its business with complementary products and customers.

Housebuilder Bellway also joined the festive giving. In a trading update, it reaffirmed plans for a 50p per share final dividend and said it hoped to increase future payouts as its profits recover from the pandemic.

The builder previously suspended its dividend to save cash and first revealed plans to bring it back in October. Its payout is still down from 100p per share last year.

In a trading update, Bellway said reservations had been temporarily affected by a gap between the old and new Help to Buy loan schemes but underlying demand for homes remained strong.

It said completions in 2021 are set to rise 25 per cent after they plummeted by 31 per cent in the year to July 31, largely due to the period when it temporarily ceased activity during the first lockdown.

And Bellway revealed a 6 per cent increase in the overall reservation rate to 210 a week compared with a year ago, leaving its order book standing at £1.8billion at the end of November.

Boss Jason Honeyman said: ‘Bellway is in a robust position.’

However, housebuilders and estate agents could face a rocky period next April if the pandemic causes a surge in unemployment and demand for homes is hit by the end of the stamp duty holiday.

Banks have also tightened mortgage lending requirements, making it harder for some buyers to get on the property ladder.

Dan Lane, a senior analyst at investing app Freetrade, said: ‘An order book heading towards £1.8billion through to next summer will be a shining light for Bellway investors, but there’s a lot of fog to get through first.’ After the update, Bellway’s shares fell 1.6 per cent, or 44p, to 2718p.

High Street retailer French Connection rose 0.8 per cent, or 0.08p, to 10.1p after it cheered ‘encouraging’ sales at shops that reopened on December 2.

Visitor numbers had fallen due to tightening Covid-19 restrictions from September and it was forced to close its branches in November during the England-wide lockdown.

But online sales ‘continue to trade positively’ and wholesale orders of its spring clothing for 2021 were ‘ahead of expectations’.

And Manchester-based energy metering group Calisen soared 24.7 per cent, or 51p, to 257.6p after backing a takeover bid worth £1.4billion or 261p per share from a consortium including Blackrock, Goldman Sachs and Abu Dhabi’s Mubadala Investment Company.