Javier Hernandez scored a first-half header, and Mexico survived a tense second half to advance to the Copa America quarter-finals on Thursday night with a 2-0 victory over Jamaica.

Mexico advanced from their group along with Venezuela, who beat Uruguay earlier in the evening. Mexico and Venezuela will meet on Monday in Houston to determine who finishes top. 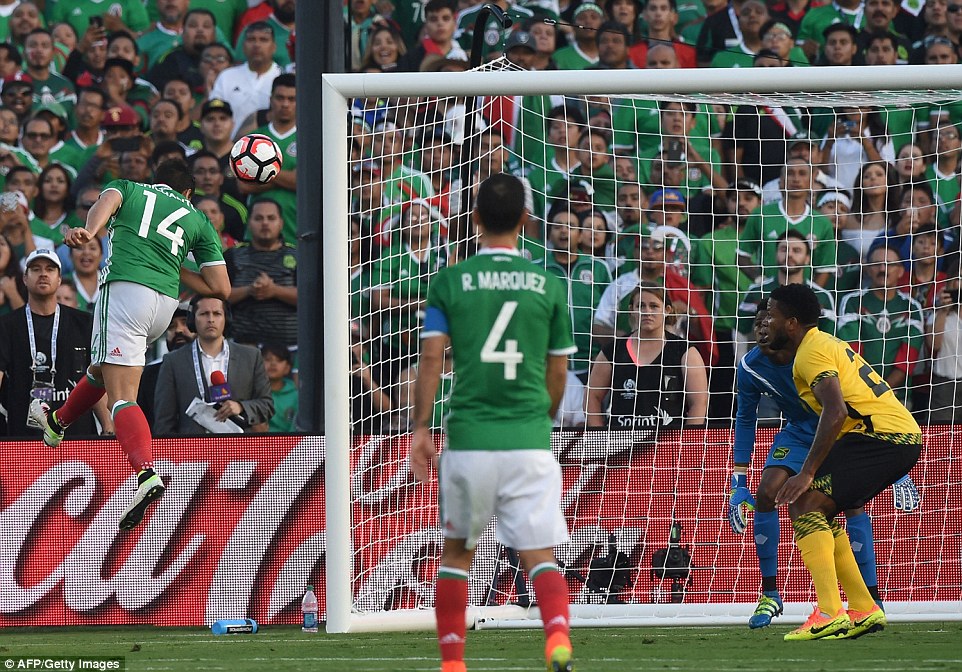 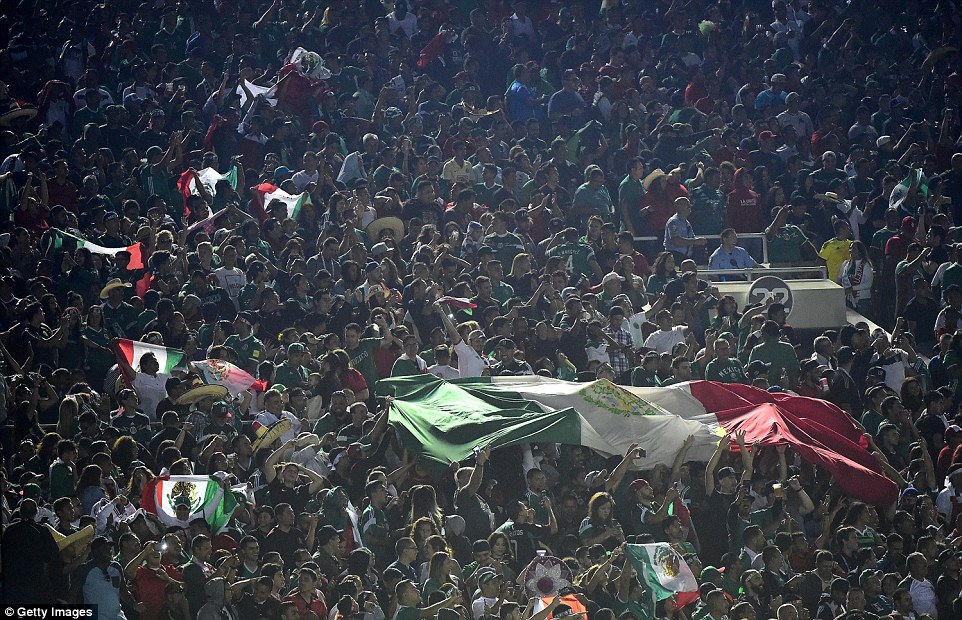 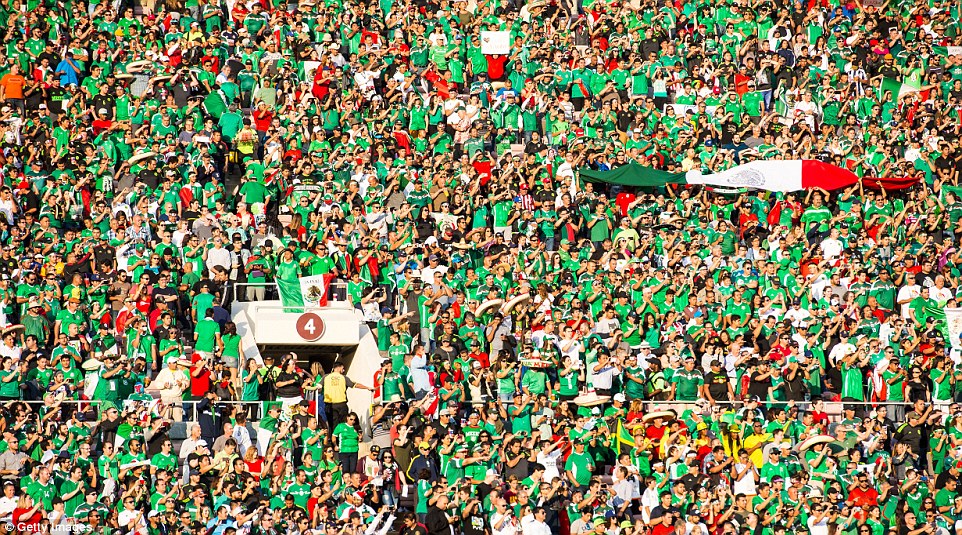 Thousands of El Tricolor supporters came decked out in the green, white and red of the Mexican, with traditional sombreros out in force 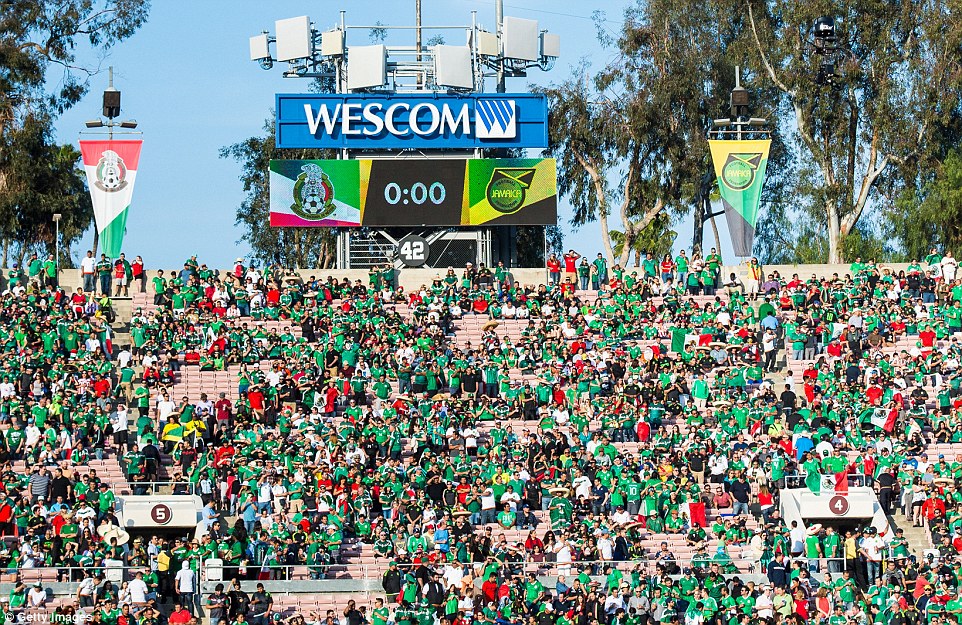 Pasadena, where the Rose Bowl is situated was Mexican land back in the 18th century, and their fans were out in force to see their side 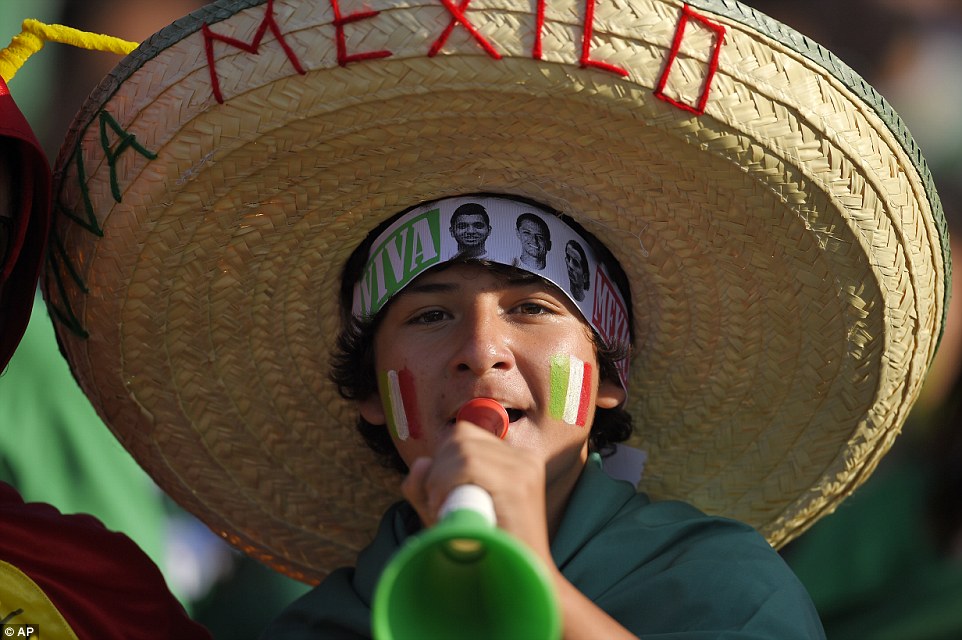 Passionate supporters had all the gear on to support their team with vuvuzelas, sombreros and head bands all on show 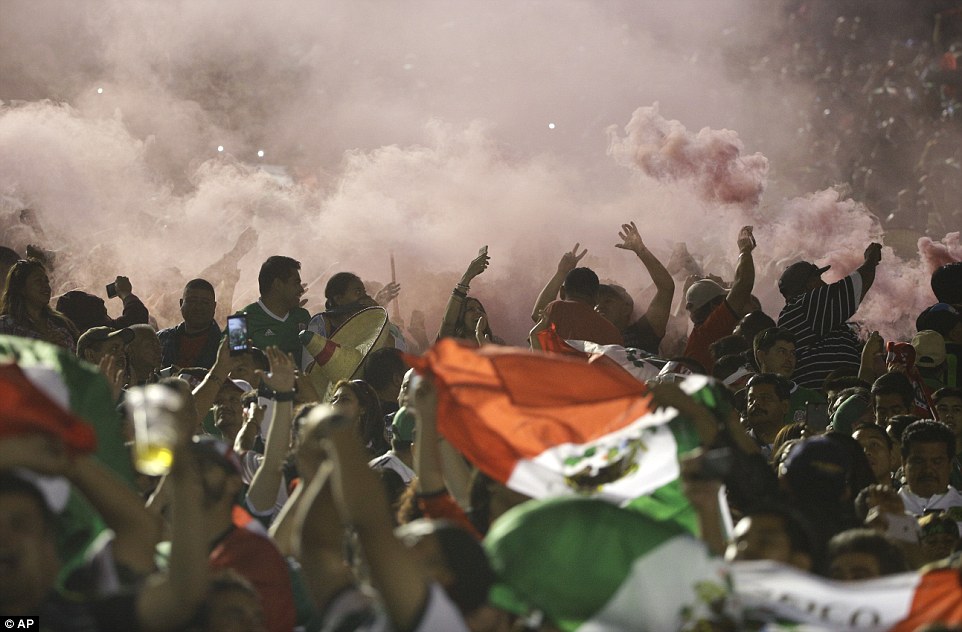 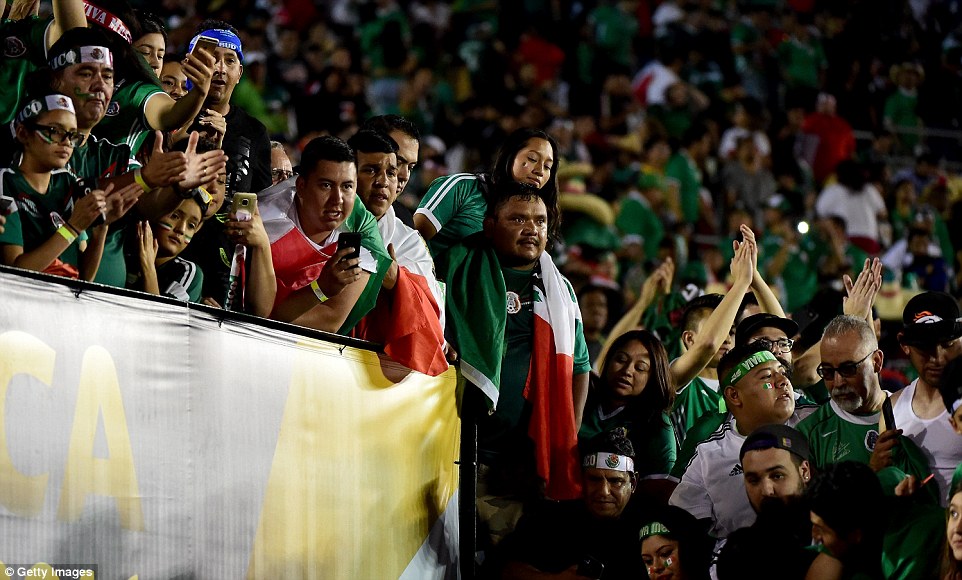 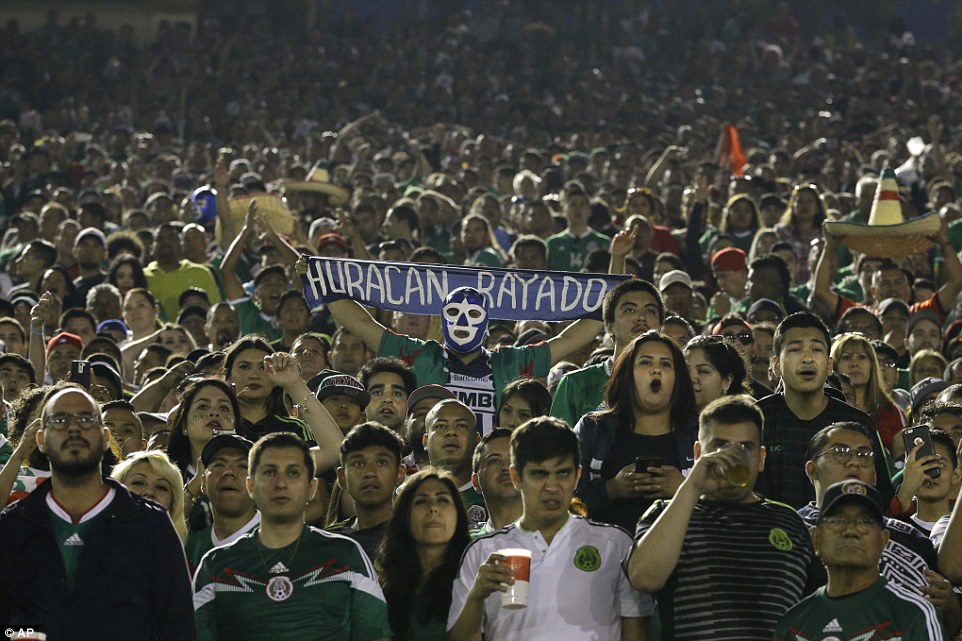 Chicharito put Mexico ahead in the 18th minute with an exceptional header, outjumping Wes Morgan and setting off a seismic celebration at a Rose Bowl packed with Mexican fans for the rematch of last year’s Gold Cup final.

The 28-year-old Hernandez got his 45th career goal for Mexico, leaving him one shy of tying Jared Borgetti’s national team record.

Mexico struggled at times before Peralta came on for Chicharito and promptly scored a late goal. Ochoa was forced to make several big saves after sitting out the opener, including a diving fingertip save to keep out Michael Hector’s long strike in the 84th minute.

But the Mexicans remained unbeaten in 21 consecutive matches, and they improved to 9-0-0 record under coach Juan Carlos Osorio.

Jamaica were eliminated after failing to score in their second straight Copa America match despite pressing throughout the night.

The Rose Bowl crowd of 83,263 was utterly dominated by green-clad fans cheering the effective home team in this US-based tournament. El Tri attract enormous crowds wherever they play north of the border, but few fans are more passionate than those in Los Angeles’ enormous Mexican-American community.

Despite the raucous fan support – or perhaps because of it – Mexico had a few nervy defensive moments early on, including a missed chance by Clayton Donaldson after a good counter-attack by Jamaica. 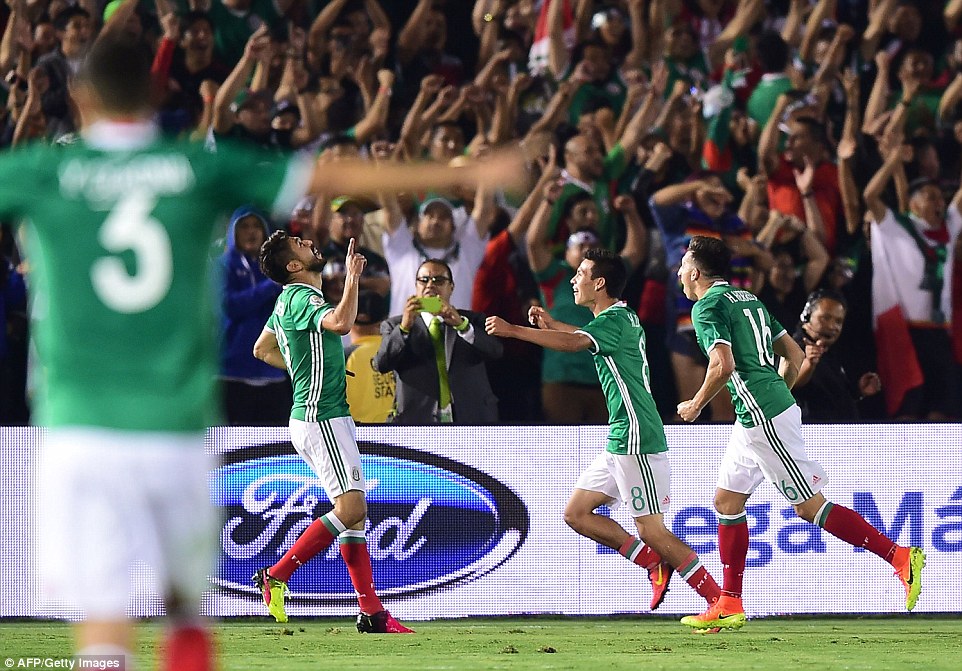 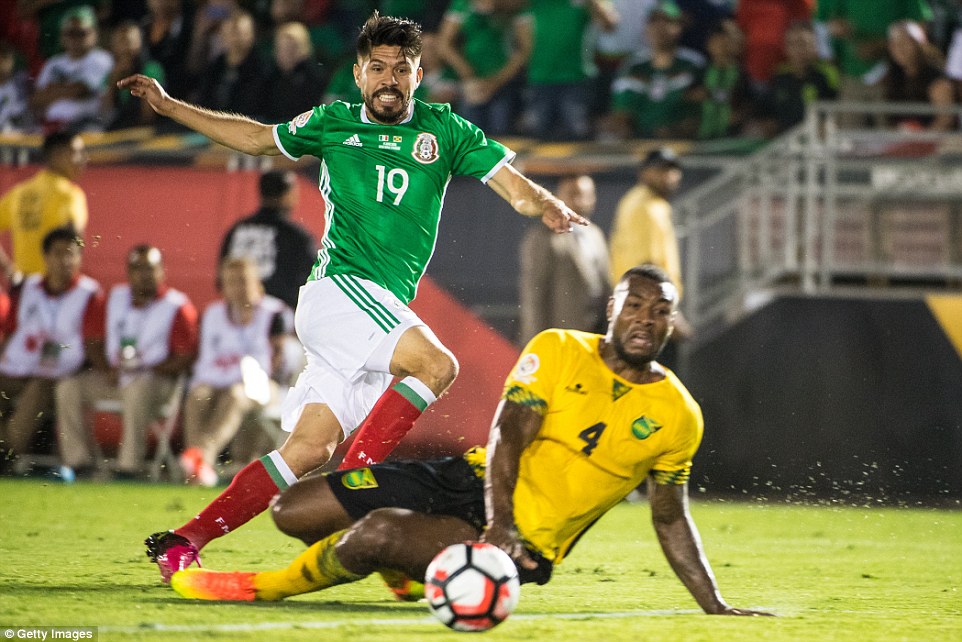 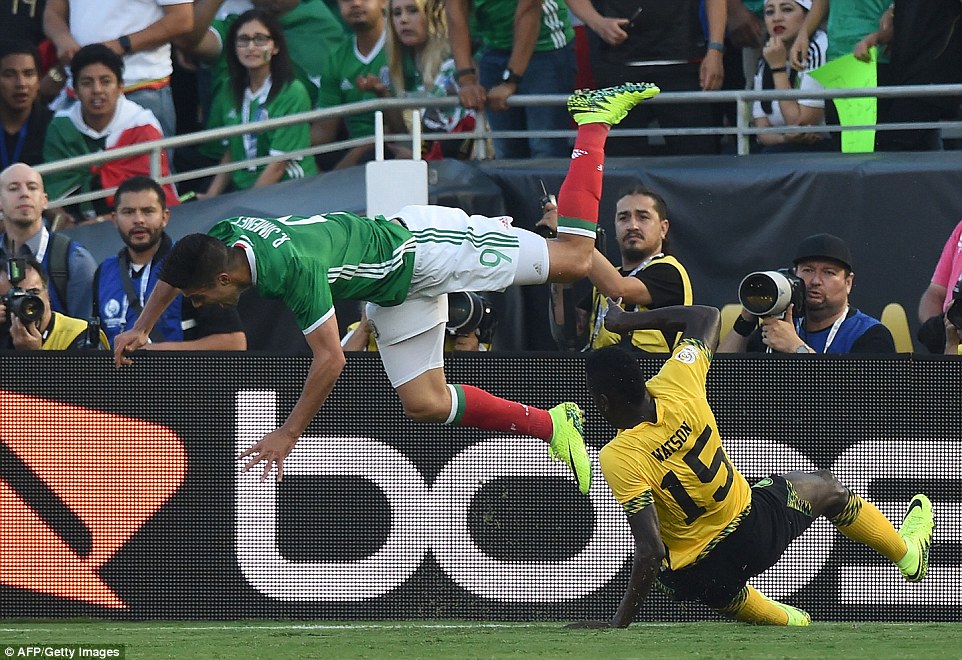 Mexico went ahead when Jesus Manuel Corona tracked down Raul Jimenez’s cross and sent it back in front to Chicharito. The Bayer Leverkusen star outjumped Leicester’s Morgan, who didn’t start Jamaica’s opener because coach Winfried Schaefer said he was too tired from partying to celebrate the Foxes’ Premier League title.

Jamaica pressed forward again, but defender Yasser Corona blocked a shot by Je-Vaughn Watson of the New England Revolution in the 35th minute.

Ochoa made a series of stops in the 39th minute as Jamaica pushed for an equaliser. Mexico couldn’t counter and struggled for possession, managing just one shot in the first half.

Jamaica’s positive play continued after half-time. When Yasser Corona took down Donaldson in the penalty area in the 64th minute, Jamaica’s incensed bench demanded a penalty, but to no avail.

Mexico finally finished things off when Hirving Lozano made a long run and found Hector Herrera, who dropped it off to Peralta. 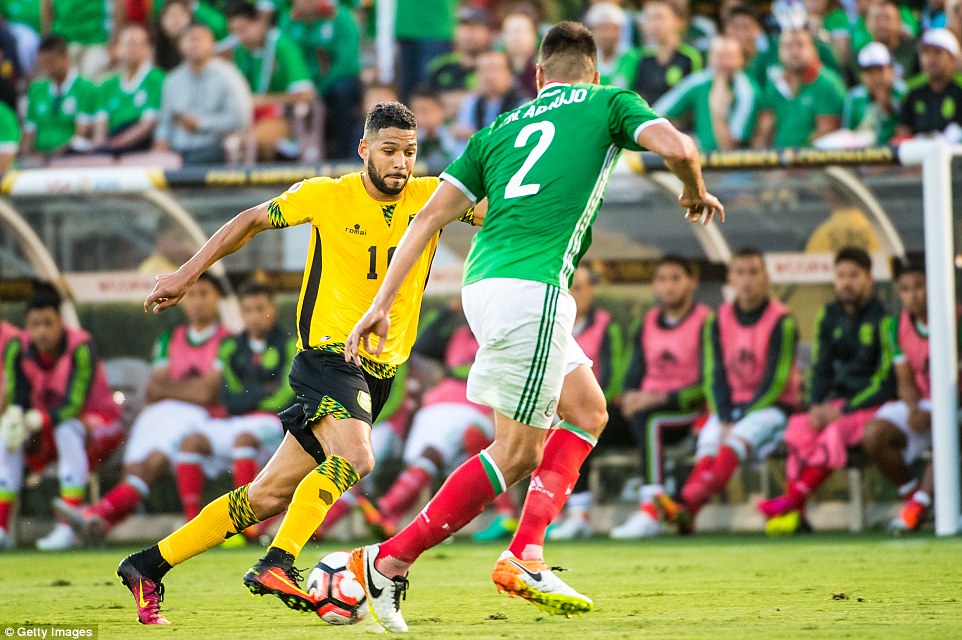 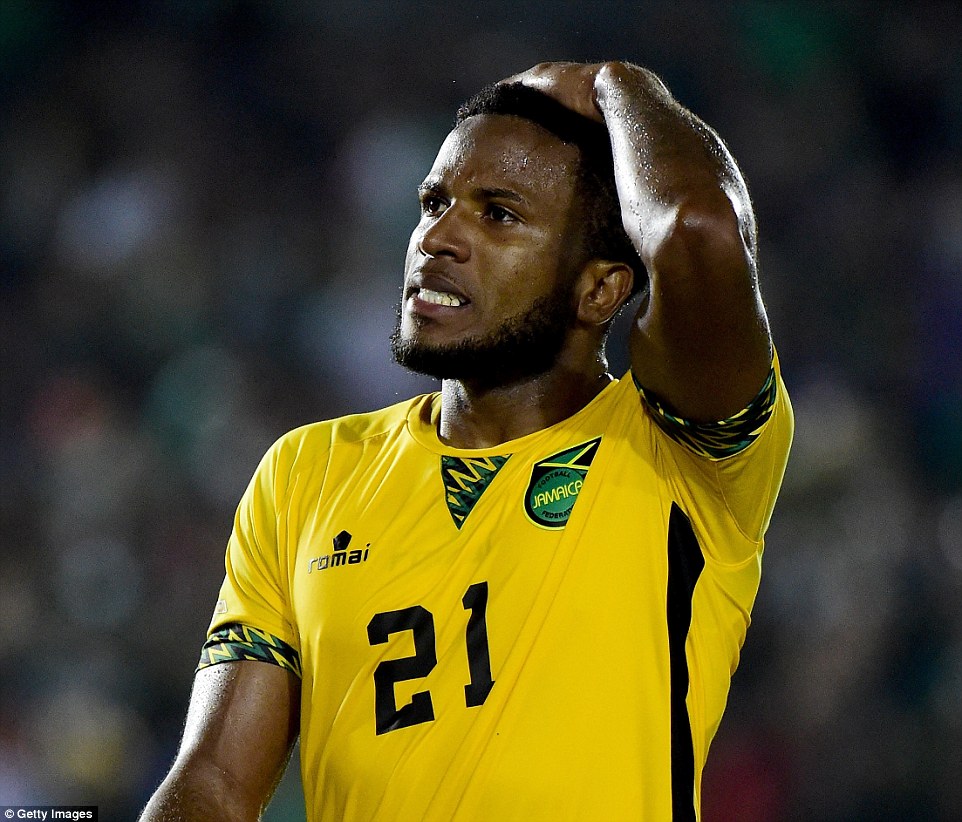