When Everton managed to lure Moise Kean away from the bright lights of Juventus and the Champions League, there was disbelief in some circles.

Why would one of the game’s most promising young talents, a contender for the Golden Boy award, leave the Serie A champions for a team who had struggled in the bottom half for much of the previous season and ultimately finished eighth?

Some assumed that it was because of money, or Juve wanting to cash-in on him to fund other deals, while others suggested that his attitude may be an issue. 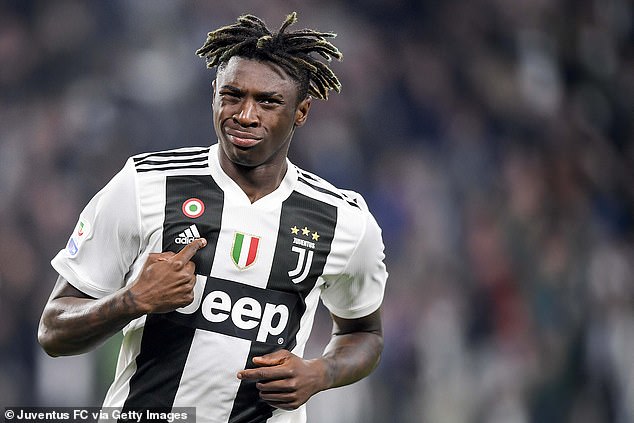 Kean, pictured celebrating for Juventus last term, was one of the shock signings of the summer

Not many offered up the opinion that Kean’s surprise move came about to aid his development, giving him a chance to play regularly in the best division in Europe when his opportunities in Turin would’ve surely been more limited.

That was certainly the opinion of the 19-year-old and his advisers when they listened to Everton’s director of football, Marcel Brands, and his plan for the future.

The Dutchman is a master of selling the club to transfer targets and it was no different with Kean, who was promised a chance to establish himself in the first team and push for Europe under Marco Silva.

In a viral clip, Brands even presented the striker’s mum, Isabelle Dehe, with an Everton shirt and promised her: ‘We will take care of your son.’

But a little over four months later, Kean was being hauled off by Silva’s short-term replacement, Duncan Ferguson, just 19 minutes after being sent on against Manchester United.

That substitution – which divided fans and pundits alike – was the lowest point of the Italian’s fledgling Everton career, although the rest has hardly been a success story. 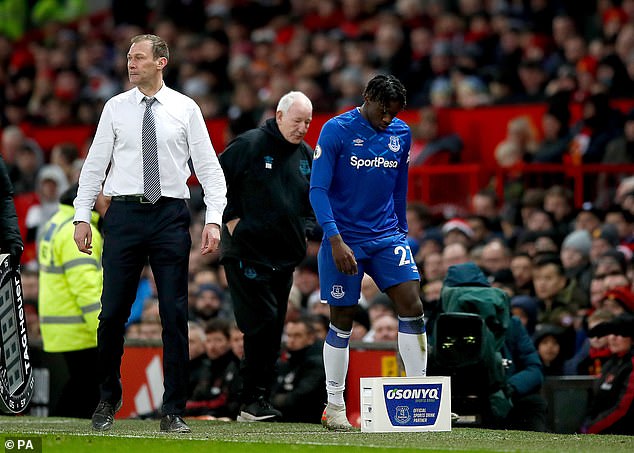 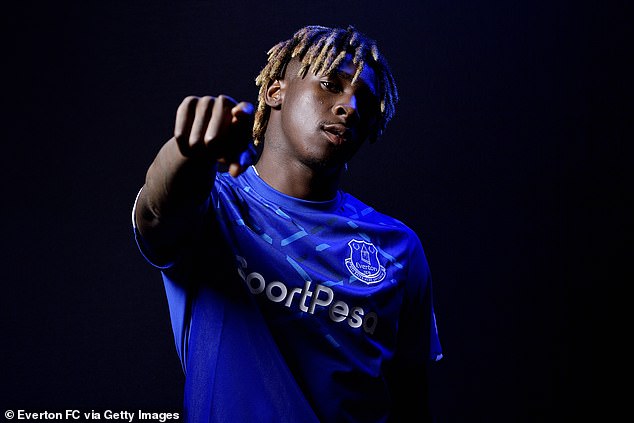 Kean has started just two Premier League games all season, and been brought off the bench in another 11. He has just 366 top-flight minutes under his belt, no goals and only one assist.

In the Carabao Cup, he has started twice and come off the bench once – against Leicester on Wednesday night – and is still without a goal to his name.

Kean was meant to become Everton’s next Romelu Lukaku – a rough diamond who would develop into one of the continent’s most deadly finishers – but he is already being heavily linked with a return to Serie A. So, how has it come to this?

Arguably the biggest issue Kean has had this season is Silva, or more specifically, a lack of faith from his former manager.

The Portuguese actually wanted to sign Kean’s Juventus team-mate, Mario Mandzukic, instead of him last summer to give his side an experienced target man – a role that does not fit the youngster’s game.

The Athletic claim that Kean did not even feature on a list of five attacking targets put together by Silva and Brands, and was not discussed prior to the summer transfer window. 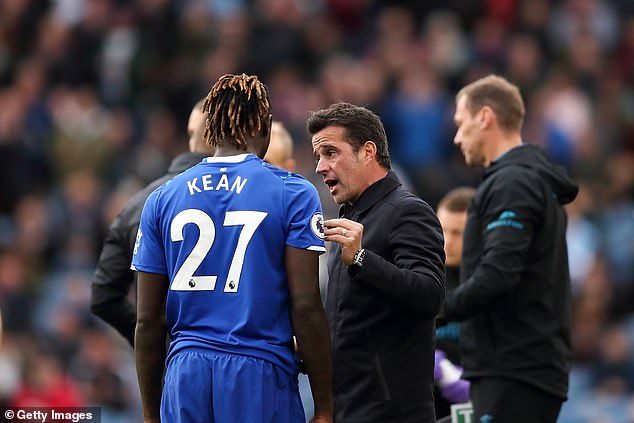 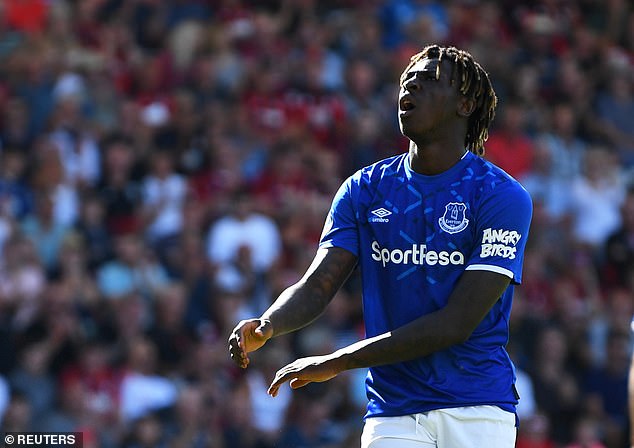 The 19-year-old, who is yet to score this season, reacts after missing a chance at Bournemouth

Kean was clearly not a Silva pick and that was reflected in his limited game-time under the ex-Watford boss, who often threw him on with time running out and made the strange decision to use him on the right wing in a cup clash with Watford.

The striker made lively cameos against the Hornets and Aston Villa in the Premier League, and got an assist in his first start against Wolves, but never fully convinced as Silva desperately searched for a starting XI to put points on the board.

The former Hull manager would have surely been influenced by Kean’s displays in training, too, with reports suggesting that he has not always put in 100 per cent effort at Finch Farm.

And the striker didn’t help himself by turning up late to a team meeting for a second time before a game against Southampton in November. Silva reacted by dropping Kean from his matchday squad.

He received a similar punishment when Roberto Mancini left him out of the senior Italy setup in September after he had arrived late for a briefing at the Under 21 European Championship over the summer.

But while Graeme Souness’ controversial comments comparing Kean to Emmanuel Adebayor and suggesting his off-the-field activities were ‘not the best’ at the start of the season were completely unjustified and uncalled for, there can be no doubt that there is room for improvement when it comes to the player’s professionalism.

He stormed straight down the tunnel after Ferguson replaced him at Old Trafford on Sunday, although the Scot did admit that he would’ve reacted the same way had he been taken off after being sent on less than 20 minutes earlier. 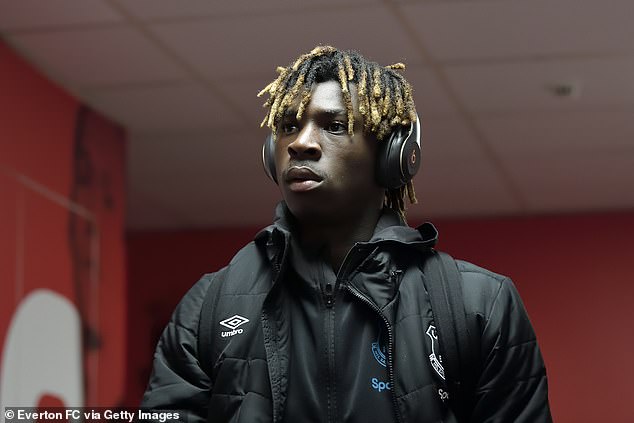 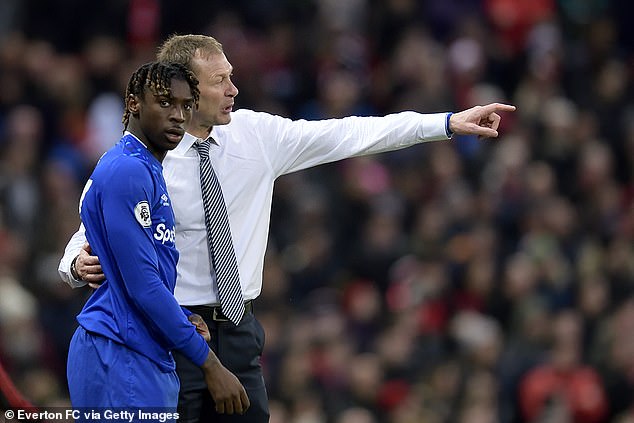 Ferguson claimed that Kean ‘struggled to get up to the speed of the game’ against United, having allowed Luke Shaw to burst forward before giving a foul away in a dangerous area.

He also appeared confused about his starting position when first entering the action, while some fans suggested that he looked unfit despite only coming on in the 70th minute of the 1-1 draw.

There were suggestions that Ferguson – and perhaps the club – may have ‘lost’ Kean after the incident, but he reacted positively after his initial disappointment.

Following talks with his manager on Monday, he trained well on Tuesday and was in the squad for Wednesday’s shootout defeat by Leicester, coming off the bench at half-time and staying on for the remainder of the game.

And while he didn’t set Goodison alight, nobody could fault the effort he put in as the Toffees fought back from two goals down to take the tie to penalties.

Kean has provided brief glimpses of his quality since his £27m summer move – an audacious shot away the King Power, powerful surges forward at Anfield and an excellent work-rate at home to Wolves.

But it’s time he put the tardiness, Old Trafford substitution and struggles under Silva behind him to get his Everton career firmly on track.

Fortunately for Kean, he may soon have the perfect manager to do just that, with Carlo Ancelotti on the verge of being named the club’s new manager. 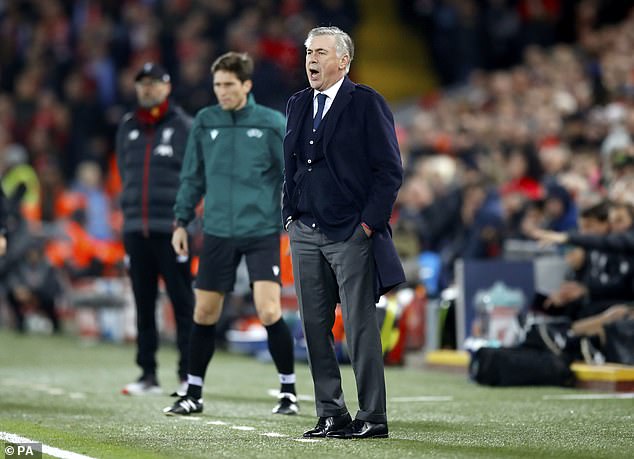 Ex-Napoli, PSG and Real Madrid boss Carlo Ancelotti is on the verge of taking over at Everton

‘I was impressed and surprised by Kean,’ Ancelotti said back in April, after watching the striker score in four successive Serie A games.

‘His beginning of the year was amazing and there’s been careful management of the player, on and off the field.’

Careful management is exactly what Kean needs now after a rough few months on Merseyside, although to his credit, his confidence does not appear to have taken too much of a knock.

As well as being able to converse with Kean in his native Italian should he need to, the former Real Madrid and AC Milan boss is renowned for his motivational skills and making his players believe in their ability.

There is nobody in the Everton squad who needs that more right now than Kean, and if Ancelotti can coax the best out of him, the hope is that he will have finally solved the striker crisis which has plagued Everton since Lukaku departed in 2017.

After the stick approach of Silva and Ferguson, a carrot from Ancelotti could be the key to Kean fulfilling his potential.

If he does, plenty will be questioning why he went to Everton all over again.