The mother of a teenager fatally stabbed by the brother of a rapper has criticised the musician for paying tribute to the killer at an awards ceremony.

Rapper Dave, whose full name is David Orobosa Omoregie, said his brother Christopher was the inspiration behind his album after picking up the 2019 Mercury Prize this week.

The debut record, called Psychodrama, even features the voice of his brother – who is serving a life sentence for the murder of Sofyen Belamouadden.

Rapper Dave, above, whose full name is David Orobosa Omoregie, said his brother Christopher was the inspiration behind his album after picking up the 2019 Mercury Prize this week

The boy, 15, was stabbed nine times in the lungs and chest by a teenage gang, dubbed the Samurai Tube killers, in front of commuters at Victoria station in London in 2010. Christopher Orobosa Omoregie, now 26, was a ringleader.

He was jailed in 2012 for a minimum of 18 years by a judge who said he failed to ‘show any kind of remorse’.

Last night Sofyen’s mother Naina Ghailan said it was ‘disgusting’ that Dave received an award for an album featuring her son’s killer.

‘In this sad society now, killers are seen as heroes,’ she told Sky News. ‘[Christopher] will probably get an award too when he comes out of prison. Whatever I say isn’t going to change anything.

‘I lost my son for ever, nothing will bring him back.’

On the final track of Psychodrama, 21-year-old Dave raps about being physically sick on the day his brother was jailed.

The musician, from Streatham in south London, also appears to question the verdict in his brother’s trial, rapping: ‘Is it survival of the fittest or is he a killer?’ Dave goes on to describe his brother as ‘my hero’.

Asked how she felt about the track, entitled Drama, Miss Ghailan said: ‘It’s disgusting how his brother is on that from prison and [Dave] still got an award… No one in their right mind [would] listen to those sort of songs.’ 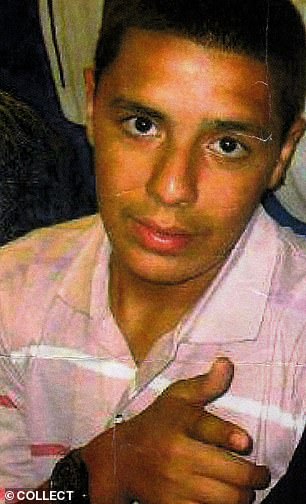 The boy, 15, was stabbed nine times in the lungs and chest by a teenage gang, dubbed the Samurai Tube killers, in front of commuters at Victoria station in London in 2010

Upon winning the £25,000 prize at the Hammersmith Apollo on Thursday, Dave said: ‘I wanna thank my brother Christopher that inspired this album.

‘This is your story that we told, and even though you can’t be here with us today, I know you’re watching this bro. And I’m so grateful, thank you guys so much.’

The ceremony also saw controversy when rapper ‘slowthai’ held up an effigy of Boris Johnson’s head during a live performance.

Slowthai was one of the favourites to win the Mercury Prize with his album Nothing Great About Britain.

In an online statement posted after the ceremony he said he had ‘held up a mirror to the country and people didn’t like the reflection’.

He added: ‘No Boris Johnsons were hurt in the making of this… performance. I don’t condone violence in any form.’