Kellyanne Conway repeatedly violated federal law when she mixed politics with her administration work, the Office of Special Counsel found Thursday and recommended she be fired from the White House.

‘Given that Ms. Conway is a repeat offender and has shown disregard for the law, OSC recommends that she be removed from federal service,’ the official government watchdog announced in a statement.

The OSC is a permanent independent federal investigative agency that is in charge of enforcing the Hatch Act. It is run by Henry Kerner, whom Trump nominated to the post.

Conway was found guilty of multiple violations of The Hatch Act, which bars federal employees from engaging in political activity in the course of their work.

The White House demanded the agency retract its 17-page report on Conway.

‘We ask that you withdraw and retract the report,’ wrote White House counsel Pat Cipollone in the administration’s 11-page response.

SCROLL DOWN TO READ THE FULL LETTER

Kellyanne Conway repeatedly violated federal law when she mixed politics with her administration work, the Office of Special Counsel found

Cipollone, in his response, questioned whether the Hatch Act applies to Conway. Certain high-level officials are exempt.

‘First, even assuming that the Hatch Act applies to the most senior advisers to the President in the White House, OSC has violated its statutory obligation to provide Ms. Conway a reasonable opportunity to respond,’ he wrote.

He also argued Conway’s Twitter account and media appearances ‘do not violate even the standards used by OSC itself.’

Cipollone gave the agency until June 21 to hand over all the documents on Conway it used to come to its recommendation.

‘[I]n light of the many significant issues discussed in this initial response, I reiterate our request that OSC withdraw and retract its Report. If the OSC chooses not to do so, the White House will need additional information to consider fully and fairly each of the allegations and OSC’s conclusions. Accordingly, we ask that you provide the following information by June 21, 2019,’ he wrote.

The Office of the Special Counsel is not to be confused with special counsel Robert Mueller and his investigation.

The White House press office also was quick to issue a statement and stand by Conway, who served as Trump’s 2016 campaign manager.

‘The Office of Special Counsel’s (OSC) unprecedented actions against Kellyanne Conway are deeply flawed and violate her constitutional rights to free speech and due process. Others, of all political views, have objected to the OSC’s unclear and unevenly applied rules which have a chilling effect on free speech for all federal employees,’ said he said.

Groves made his statement to CNBC’s Eamon Javers, who tweeted he was in the press office when the verdict from OSC came in.

‘I was just standing in an office in the WH press office when Kellyanne Conway came in. I asked for her reaction to this. She pointed to the door and said ‘can you leave, please?’ Later, I asked her again, and she said: ‘I have no reaction. Why would I give you a reaction?,” Javers wrote. 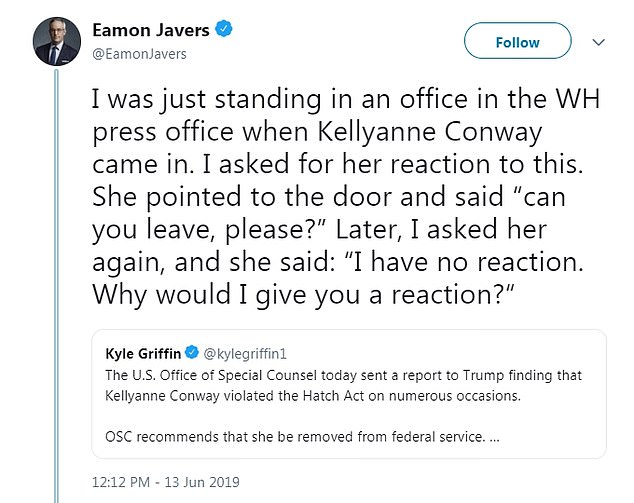 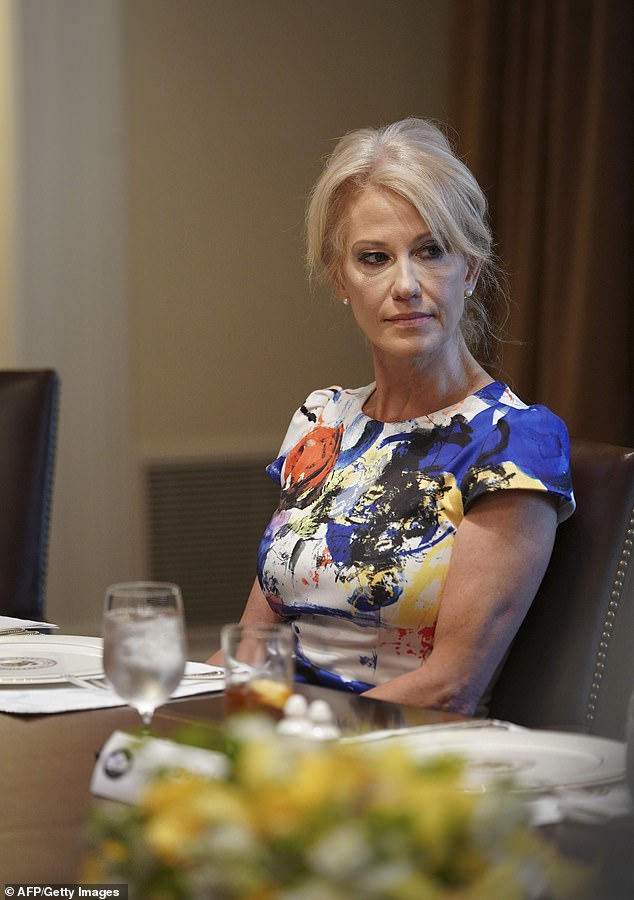 The White House was quick to defend Kellyanne Conway

The OSC said Conway ‘violated the Hatch At on numerous occasions by disparaging Democratic presidential candidates while speaking in her official capacity during television interviews and on social media.’

Trump and Vice President Mike Pence are exempt from the Hatch Act but White House employees are not.

Last month, when Conway was criticizing former Vice President Joe Biden – who’s leading the field for the Democratic presidential nomination – for his Senate record, she brushed aside questions if she was violating the Hatch Act.

‘I’m going to talk about people’s records because I have the right to,’ she said.

When a reporter asked her about violating federal law, she responded:  ‘Blah, blah, blah.’

‘If you’re trying to silence me through the Hatch Act, it’s not going to work,’ she said. ‘Let me know when the jail sentence starts.’