A paralympian who lost his leg to bone cancer at age nine doesn’t let his disability take away from the fun of celebrating his favorite holiday Halloween.

Each year Josh Sundquist, 33, prepares for the season with a new elaborate and clever costume that reinvents his leg into funny costumes – and this year is no exception.

The U.S. Amputee Soccer Team member and paralympic skier shares his costumes with his avid followers on his blog and social media, where he reveals that he wasn’t always so confident and cheerful when it came to his body. But now he uses his leg to create tickling costumes ranging from a broken Gingerbread man, the lamp from A Christmas Story, and a bouncing Tigger from Winnie the Pooh.

Jump for joy! Every year, amputee Josh Sundquist creates a hilarious Halloween costume that plays on the fact that he only has one leg, and this year he chose Tigger from Winnie the Pooh 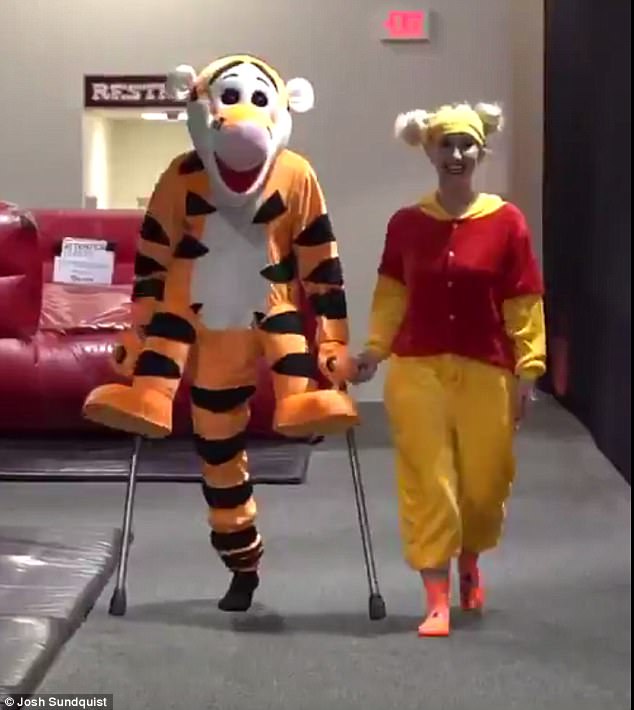 Best of pals! The 33-year-old used his remaining leg as the tiger’s tail, and even bounced on a trampoline with it – while his wife Ashley transformed into the honey-loving bear 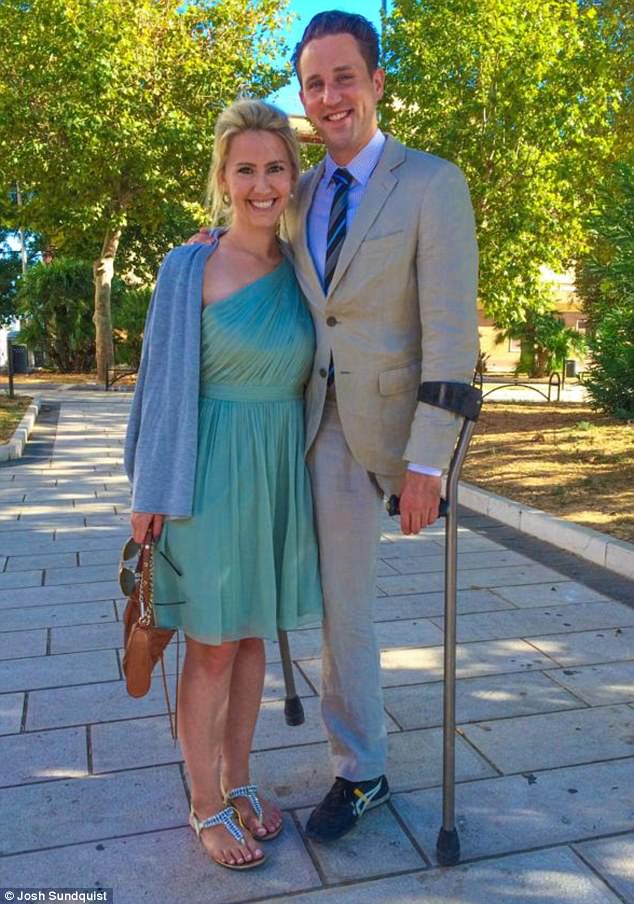 Great strides! The 33-year-old lost his leg to bone cancer when he was nine years old but today is famous as a paralympian skier and soccer star with a knack for Halloween costumes

‘I’ve always dealt with the social discomfort of my disability by having a sense of humor,’ Sundquist shared on his blog.

‘But now I’m more comfortable with who I am and what I look like, and I guess with these Halloween costumes you could even say that I celebrate what makes me different. Which may be either weird or refreshing, depending on your perspective,’ he added.

This year the motivational speaker is hopping around town on the 31st dressed as the playful stuffed tiger Tigger from the Winnie the Pooh, with his wife Ashey dressed as his sweet partner Winnie.

In his Instagram costume unveiling he revealed that after his leg was amputated as a child, his parents bought him a trampoline to help him learn how to balance. The clip displayed how Josh altered and sewed bits of the costume himself to turn his leg into Tigger’s bouncing tail and to create fake legs at his sides, to make him appear to me constantly bopping on the cat’s famous appendage.

The video sees him frolicking about a trampoline space, much like he did as a kid, having fun, doing near splits, and living a Tigger-approved lifestyle.

But this isn’t his only clever costume, Josh is so head over heels in love with the dress up holiday he launched a countdown to the special day on social media, where he revealed his costumes of the past – all of which reveal his quirky and one of a kind costumes that center on ironically using his leg. 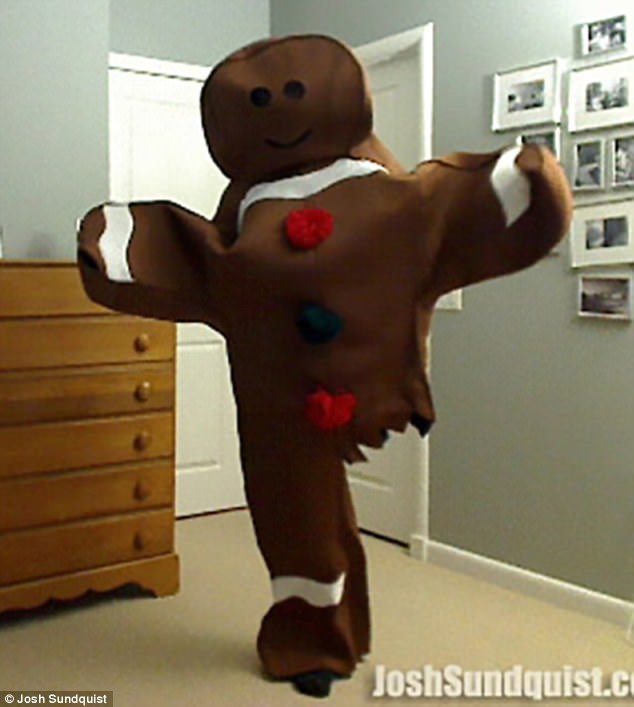 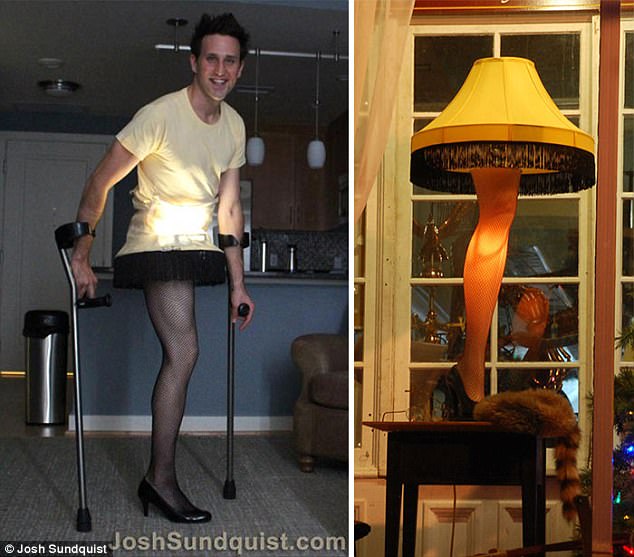 Legs for days! In 2012, inspired by his wife, he played the sexy leg lamp from the film A Christmas Story, dressed to the nines in fishnet stockings and black heels 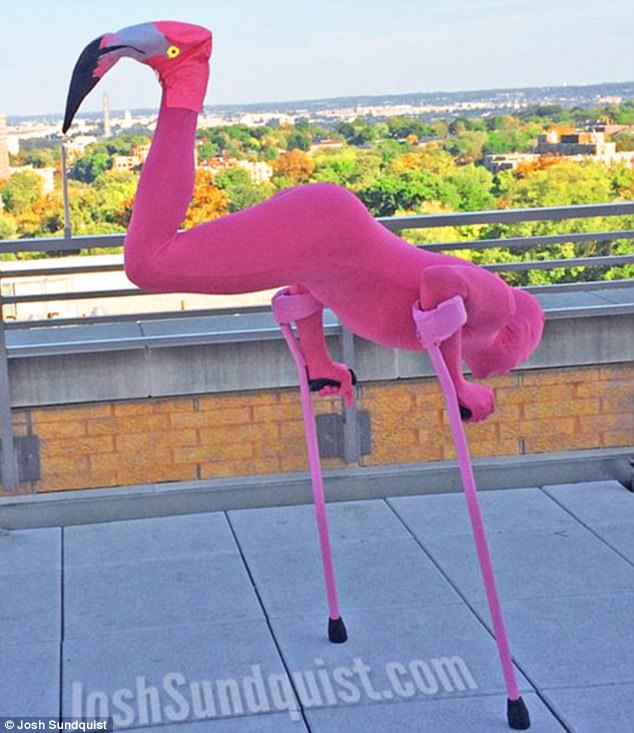 It’s a zoo out here! He turned his costume on it’s head, literally, in 2013 when he played a flamingo, using his food as the pink bird’s beaky head when in a handstand position

In 2010 he played the Gingerbread cookie from the film Shrek, from the scene when his leg was broken off and the cookie said the famous quote ‘Not the gumdrop buttons! in an interrogation scene.

Two years later he channeled his inner Hollywood star and fashioned his leg into the leg lamp from the movie A Christmas Story.

‘In 2012, Ashley suggested I dress as the leg lamp from “A Christmas Story.” I hadn’t seen the movie—we didn’t watch PG movies growing up. On Halloween people kept saying “FRA-GEE-LAY!” and “It’s a major award!” and I was like, “Um, what?”‘ Josh shared on the lamp costume backstory with his 34,700 Twitter followers.

The following year he turned things upside down, literally, and donned a pink mesh body suit to recreate himself into a one-leg craning flamingo. On his foot he wore a sock decorated to look like a flamingo eye and beak. To get into position he hoisted himself into a handstand using his crutches for support.

‘In 2013 I spotted an ostrich at the zoo and thought, “Hey that looks like me. If I was, you know, doing a handstand on my crutches.” A few minutes later, I walked by the flamingos and thought, “Even better,”‘ he shared.

2014 recreated Josh into a foosball character and he couldn’t fit the part better with his fit Olympian physique and stance that matched the glued together legs of the game characters.

For the part he wore his U.S. Amputee Soccer Team grab, brought a soccer ball, and stood in a white box, similar to the ‘feet’ of the foosball men. 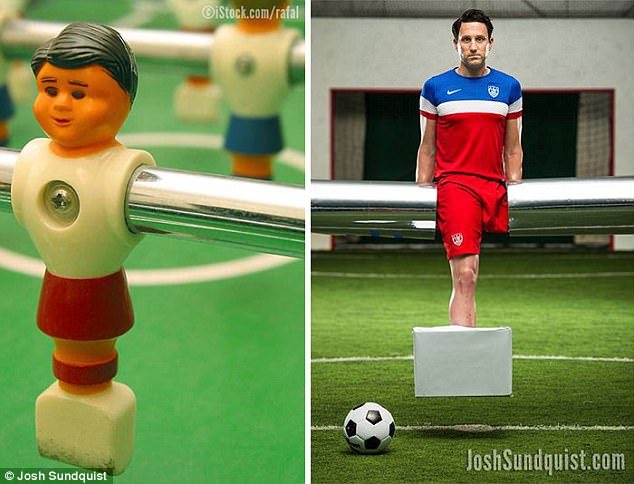 Game on! In 2014 he played a foosball character, wearing his U.S. Soccer team garb and placing his foot in a white box for the characters ‘feet’ with side pole arms 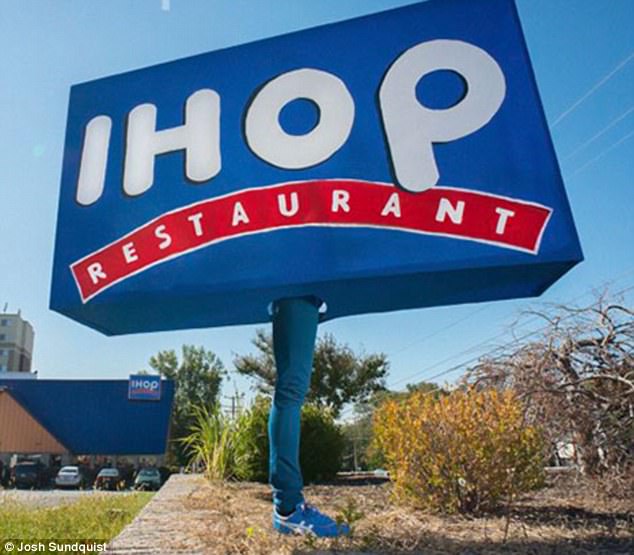 Just hoppin’ around! The following year he decided to go for a more tasty and pun-related route and dressed as breakfast stop IHOP sign, poking fun at how he hops about to get by 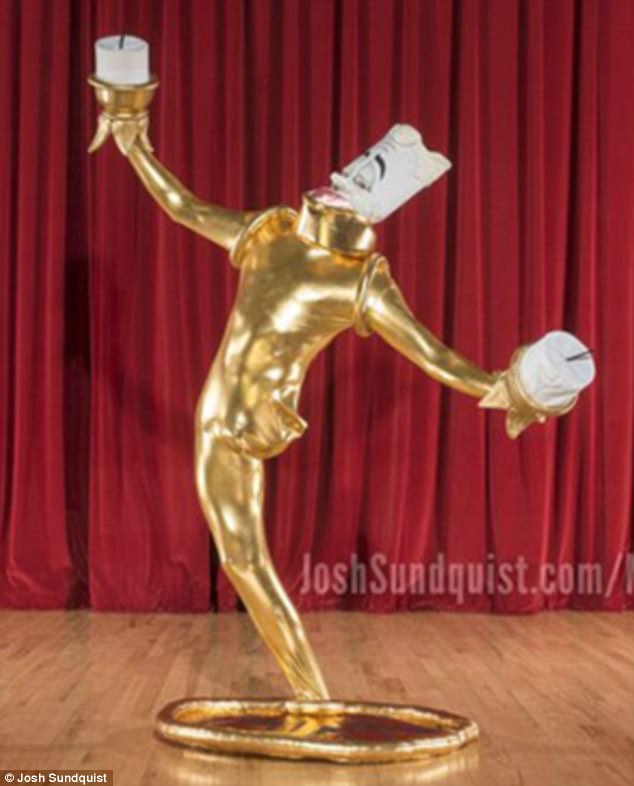 ‘That was the first year I was playing in an international tournament with the US Amputee Soccer Team. So it felt appropriate. Because, if you think about it, amputee soccer is basically human foosball,’ he shared via Instagram.

The following year in 2015 he switched from game piece to breakfast spot, recreating himself into an IHOP sign, saying the phrase is a classic amputee joke.

He crafted an IHOP sign to wear atop his head, while donning blue pants and shoes as the sign stand.

Last year he lit up the streets in his gilded Lumiere costume, playing the candle stick from Disney’s Beauty and the Beast, while his wife played the charming role of Belle.

For the role he create he sported a golden body suit and makeshift candles on his hands and a hat on top of his head fashioned to look like wax. His make-up impeccably replicated the face of the cartoon Disney character, and Josh praised him as a great movie monopod.

‘I wanted to dress as this character last year because the live-action version of the movie was coming out a few months later, and I knew Ewan McGregor was going to be playing a two-legged version of Lumiere,’ he shared on Instagram.

‘In my humble opinion Disney should have kept Lumiere’s original body-shape by casting me for the role. Just saying,’ he cheekily added.

Now fans have to wait a whole other year to see what else the costume designer with creativity of Olympic proportions cooks up.