Wars are not won by evacuations, Winston Churchill ruefully noted in the wake of Dunkirk.

Nonetheless, the famous return of the trapped British Expeditionary Force across the Channel in 1940 was seen as a significant triumph. Indeed, the story of the remarkable escape is recounted in this summer’s blockbuster movie Dunkirk.

Yet the hit film makes little mention of another group of heroes – those who were left behind after the evacuation.

Although 340,000 Allied soldiers – mainly British and French – managed to escape, about 40,000 Allied rearguard troops, many of them British, were captured and spent the rest of the war incarcerated as PoWs by the Germans.

Now, a stunning collection of wartime photographs is going up for sale, capturing the Dunkirk PoW spirit and telling some of the prisoners’ stories. 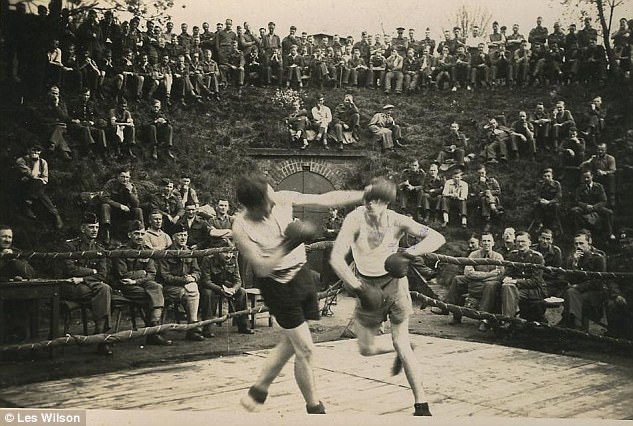 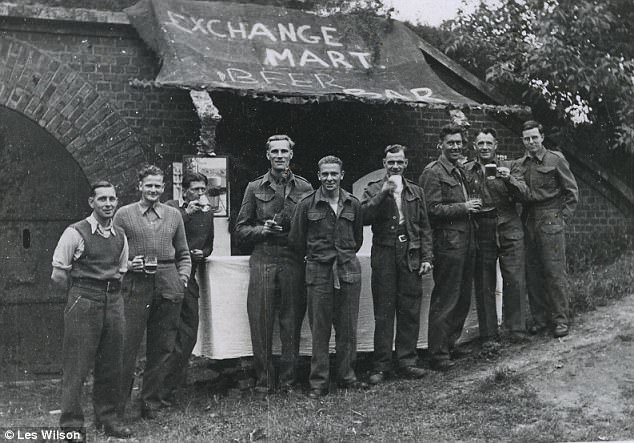 Company Sergeant Major Newton also captured men enjoying a pint at the camp’s ‘beer bar’, although it is not clear how often that privilege was allowed 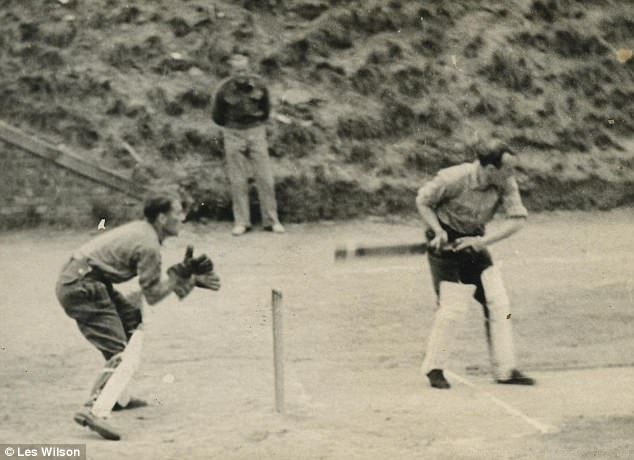 They reveal how British prisoners maintained morale despite many hardships, staging elaborate shows featuring drag performances and playing sports including cricket, boxing and football, and, on at least one occasion, even enjoying a few beers.

The photographs are not the grim scenes you might expect.

Historian James Holland says: ‘Images of them having a reasonable time will surprise a lot of people. But by and large, the Germans respected the British and had no axe to grind. They didn’t see them as “Untermensch” [inferiors] as they did Russians, Poles, Slavs or Ukrainians.

‘Also, remember who is looking after these camps. D-list soldiers, retired people and elderly. Frontline troops were not going to be looking after comparatively well behaved British PoWs.’ 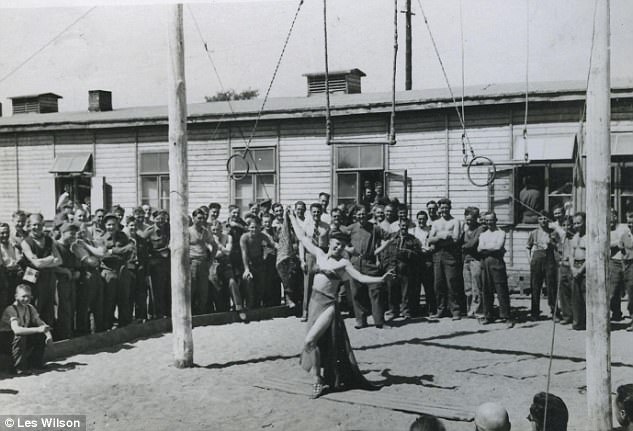 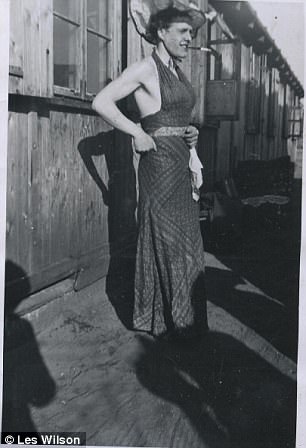 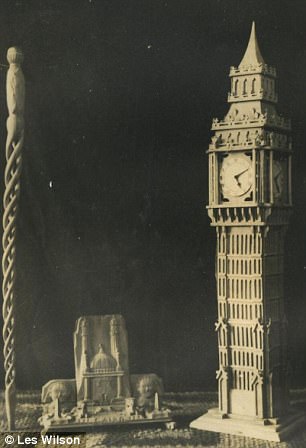 Sgt Drummond, of the Royal Artillery, left, carries off a convincing female impersonation. Right, Big Ben’s bongs may have been silenced last week… but the landmark lived on at Stalag XXA in this 1943 model snapped by Newton, which was carved by a comrade using only a penknife 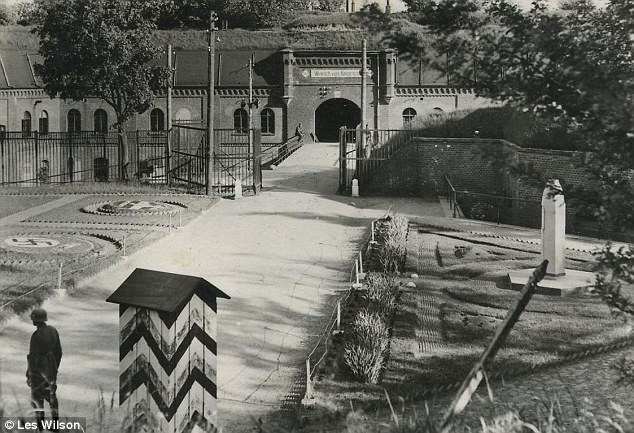 Nevertheless, Thorn was categorised as a sub camp of the notorious Stutthof concentration camp 150 miles away in Gdansk, where tens of thousands of Polish Jews were executed or allowed to die from starvation or disease.

The photo album also includes a portrait of Newton himself nonchalantly smoking a pipe.

One extraordinary image shows a Nazi soldier standing in honour of his fallen enemy at the funeral for the ‘camp’s jazz drummer’, Private Danny Fields, the coffin draped in a Union Jack. Newton wrote: ‘Note. Floral tribute from the German High Command.’ 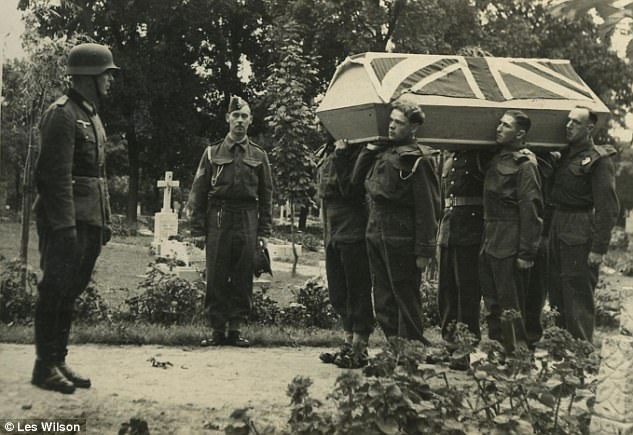 A Nazi soldier stands in honour at the funeral of Private Danny Fields, ‘the camp’s jazz drummer for two and a half years’. Newton’s pictures show Danny’s coffin draped in a Union Jack and carried by his comrades 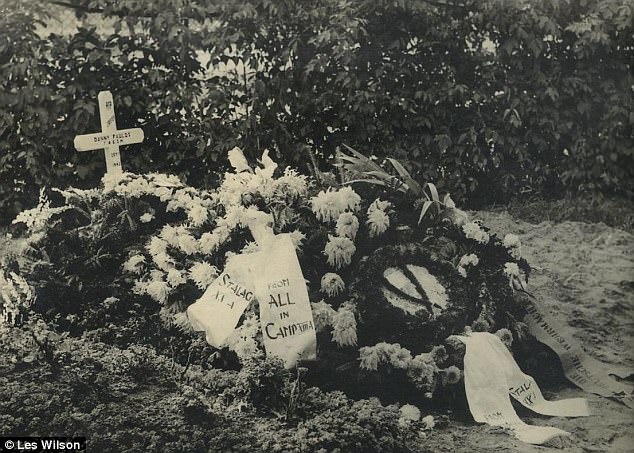 Mr Holland added: ‘The funeral pictures show that even in these circumstances, human nature comes out. Both sides just wanted to get through alive.’

In the winter of 1945, Newton survived a 700-mile forced march to a new camp on the German border but little more is known about his fate after that.