Shocking photographs have emerged showing pilots fooling around at 30,000ft – with one posing with a hangman’s noose while joking about ‘hanging out in the office’.

This comes a day after easyJet captain Michel Castellucci and his co-pilot were banned from flying ‘pending a disciplinary investigation’ after filming themselves dancing in the cockpit during a flight from Paris to Madrid.

Now fresh pictures originally posted to Instagram under the hashtag ‘#autopilotandchill’ have come to light, showing other pilots from around the globe pulling pranks while in charge of aircraft carriers carrying hundreds of paying passengers.

In one image an unnamed aeronaut holds a bird watching book while pointing to the vacant skies. In a similarly flagrant display of nonchalance, one shares a picture of a Rubik’s Cube.  In another a pouting pilot holds up two Lego toys with his back to the control panel.

The bragging airmen also shared snaps of their in-flight snacks: a large slice of takeaway pizza for one and a burger and portion of chips from McDonalds in another. The photographs have been taken down from the social networking platform and it is not known which airline the men work for.

:: Do you know the pilots in question? Email tips@dailymail.co.uk

No laughing matter: A smiling pilot posing with a noose shared the picture to Instagram, writing: ‘Hanging out at the office’ 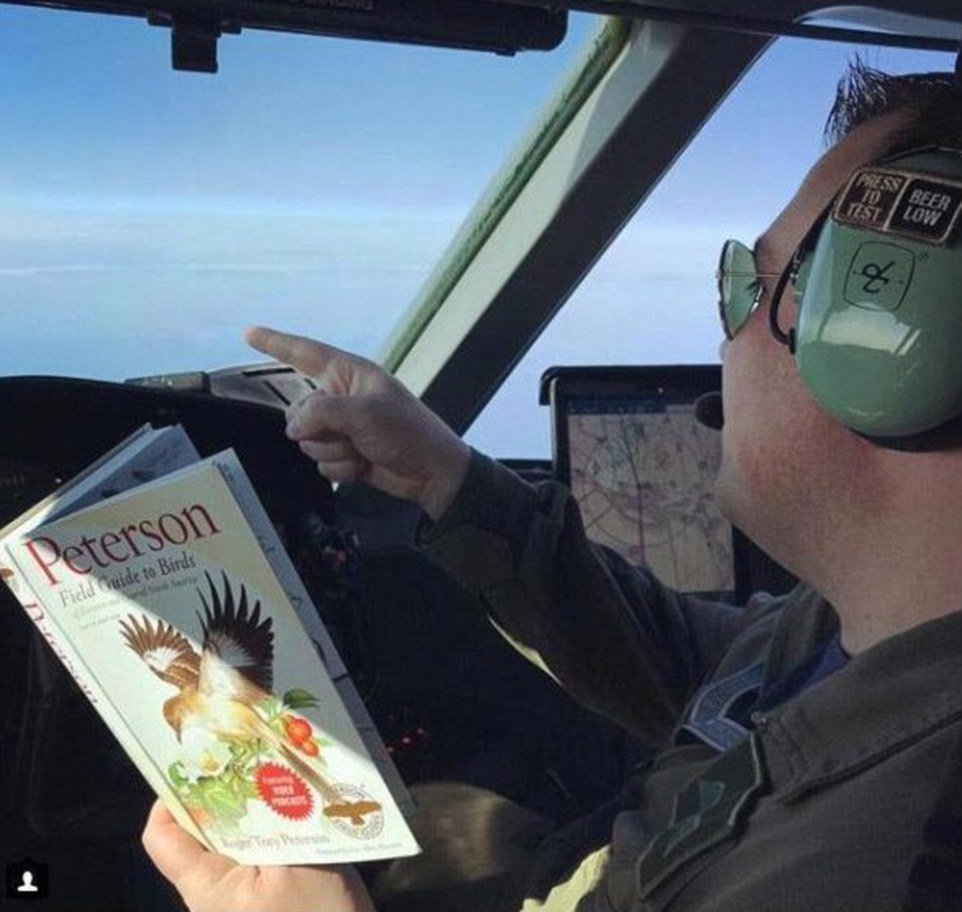 Bird watching: Another pilot points to the sky some 30,000 ft above ground in jest at the absence of flying creatures 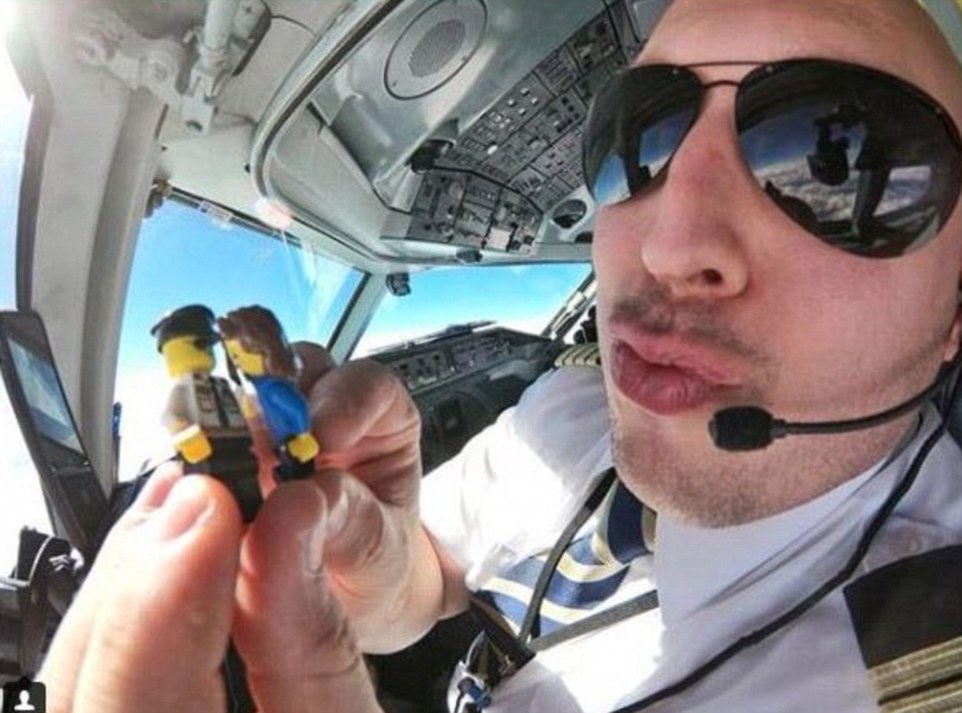 Pucker up: An airman proves he’s not too old for Lego in another photograph, pouting at the camera while making the two toys embrace 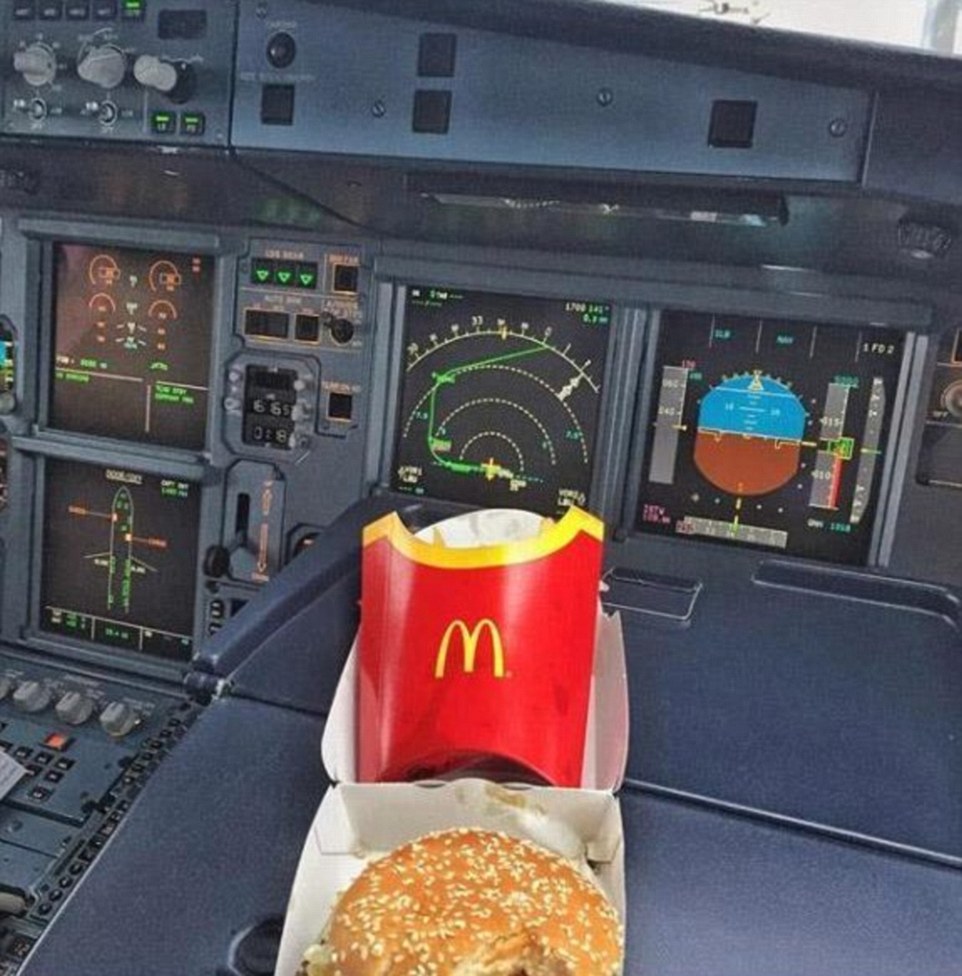 Fly-thru: Pilots also shared pictures of their in-flight grub, including what looks like a burger and fries from McDonalds 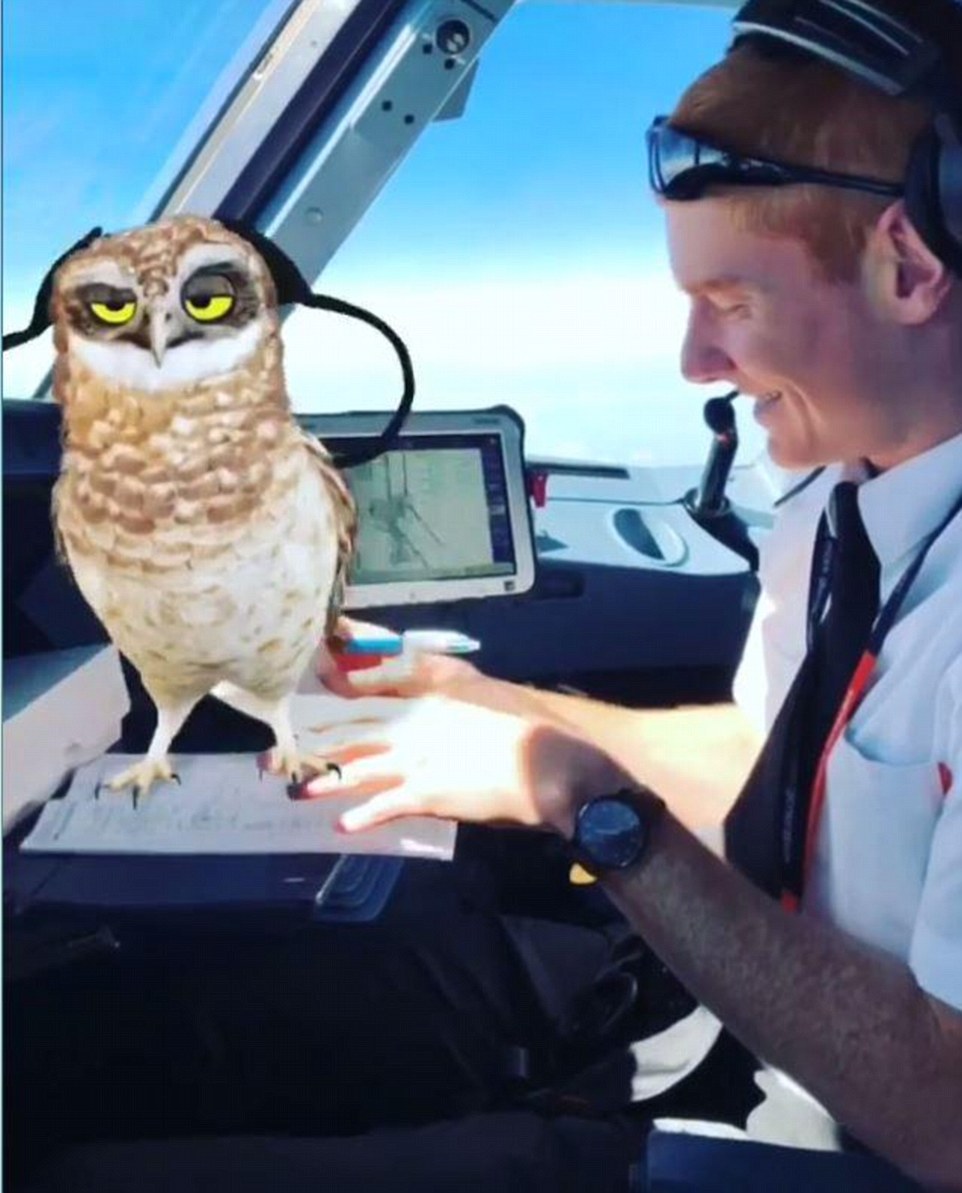 Sky high jinx: A laughing co-pilot appears to be attempting to do some paperwork while his colleague takes a photograph before adding a computerised owl to the snap 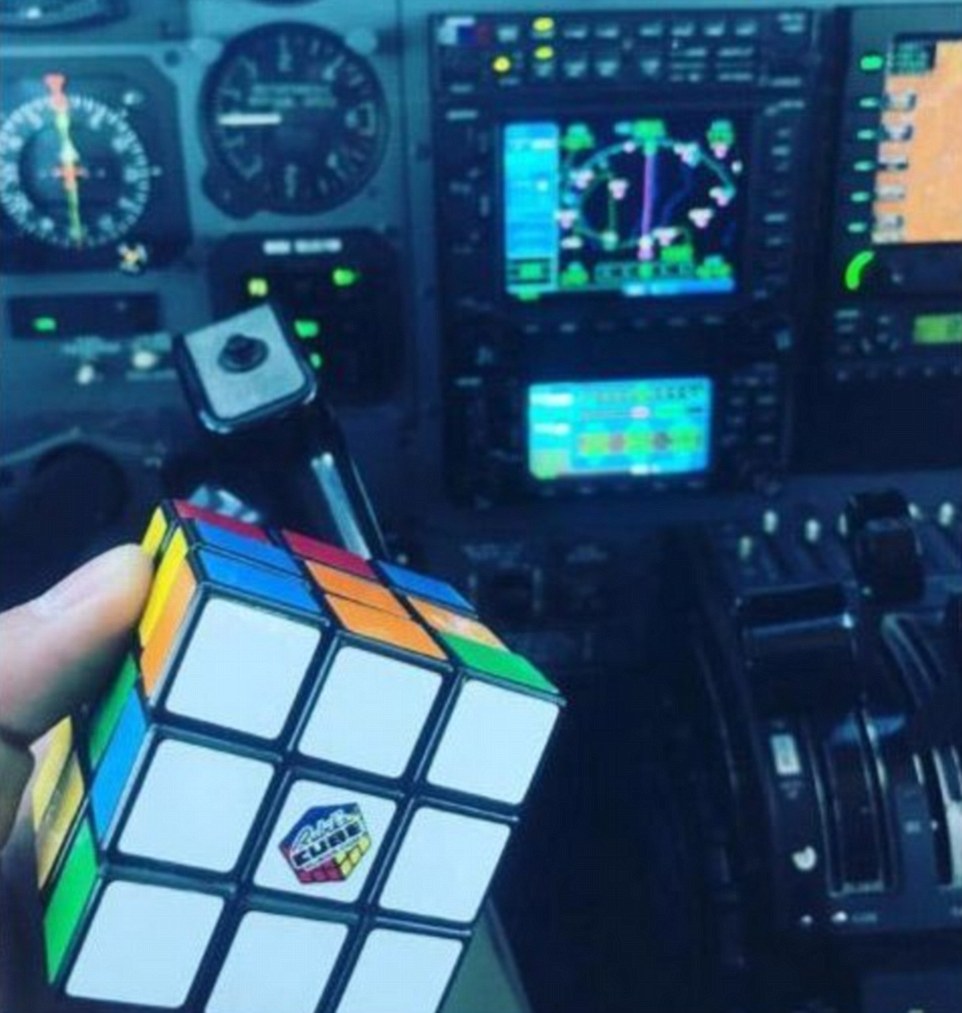 Fun and games: A navigator appeared to have time to spare during a flight and spent time trying to crack a notoriously-difficult Rubik’s Cube 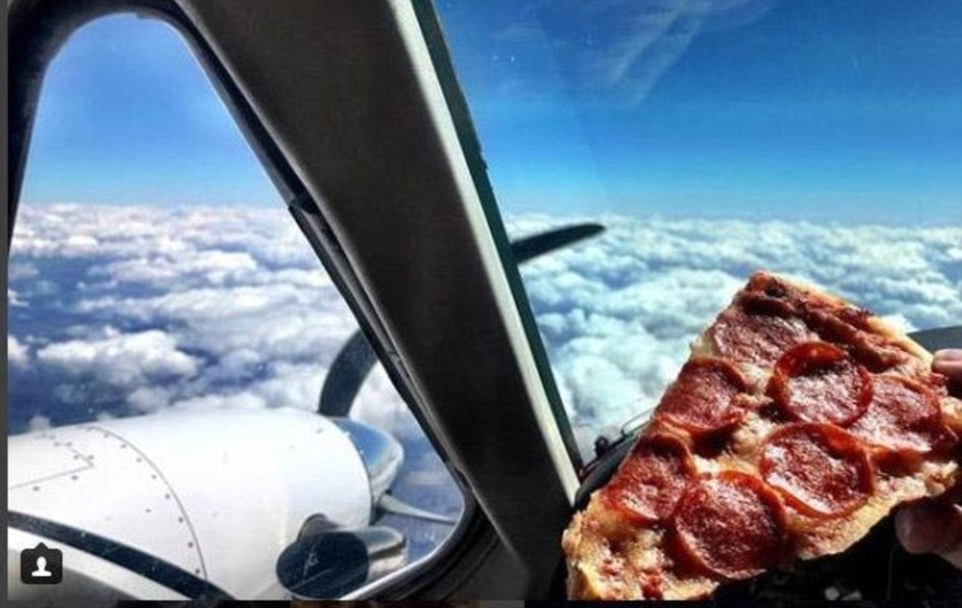 Fast food: A flyer posted a picture of their meal of choice, a slice of Domino’s pepperoni pizza, aboard a plane thought to be a Boeing 747 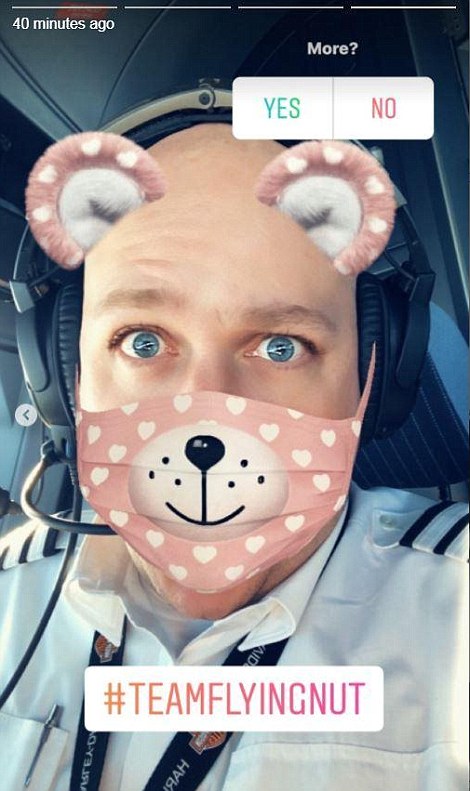 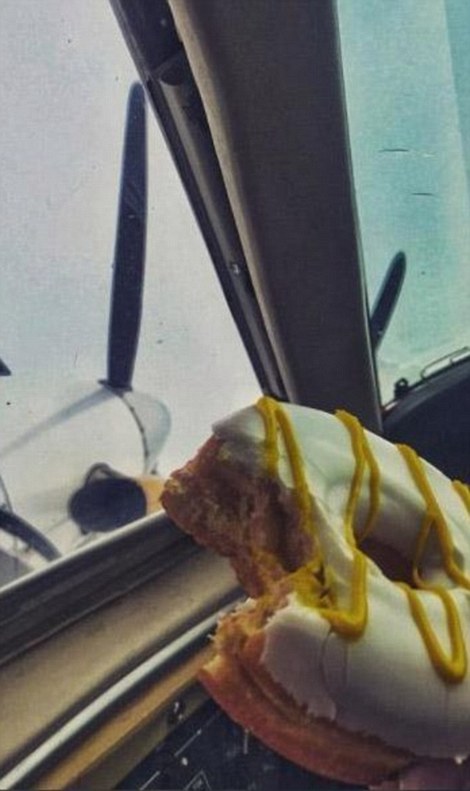 Doughnut: A Snapchat-mad pilot asked his followers whether he should take more pictures of his journey (left). While the frequent eater, who appeared to post pictures of a Domino’s in-flight snack, returned to Instagram to post another photograph of their food – this time an iced-doughnut