Pope Francis has condemned the ‘barbaric resurgence’ of anti-Semitism around the world, and linked it to the rise of populism.

The head of the Roman Catholic church told a delegation in Vatican City that the increasing spread of an attitude that says ‘life is good as long as it is good for me’ has created a ‘fertile ground’ for hatred to spring up.

His words came after Pope Emeritus Benedict XVI was alleged to have co-authored a book attacking his leadership. Benedict has claimed he did not write the book and has asked the publishers to remove his name from the work.

Head of the Roman Catholic church said he thought a rise in ‘selfishness and indifference’ had created a space for hatred to spring up. (He is pictured today meeting the Simon Wiesenthal Center delegation in Vatican City) 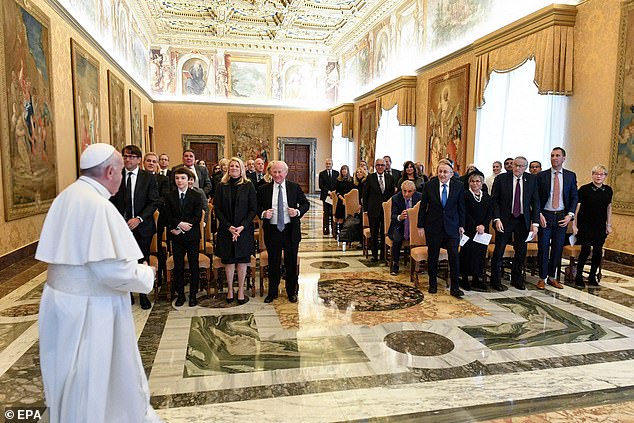 ‘Next week’s 75th anniversary of the liberation of the Auschwitz death camp should serve as a reminder not to become indifferent’, Francis told a delegation from the human rights group the Simon Wiesenthal Center today.

‘It is troubling to see, in many parts of the world, an increase in selfishness and indifference, lack of concern for others and the attitude that says life is good as long as it is good for me, and when things go wrong, anger and malice are unleashed.’

‘This creates a fertile ground for the forms of factionalism and populism we see around us, where hatred quickly springs up … where hatred is seminated.

He did not specifically mention any countries or populist movements. 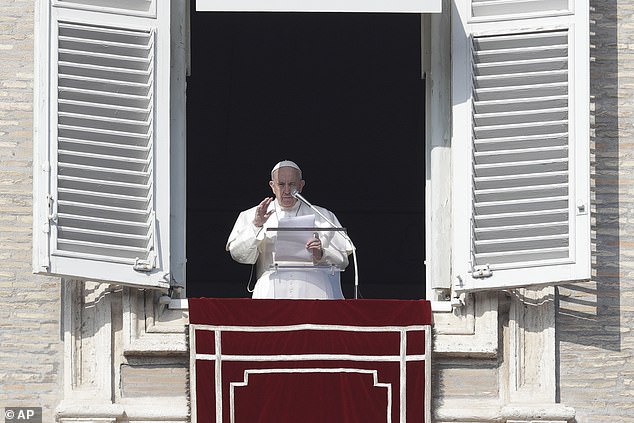 The 75th anniversary of the liberation of the Auschwitz death camp will happen next week, the Pope reminded the delegation. (Pictured delivering a blessing from his studio window in St Peter’s Square) 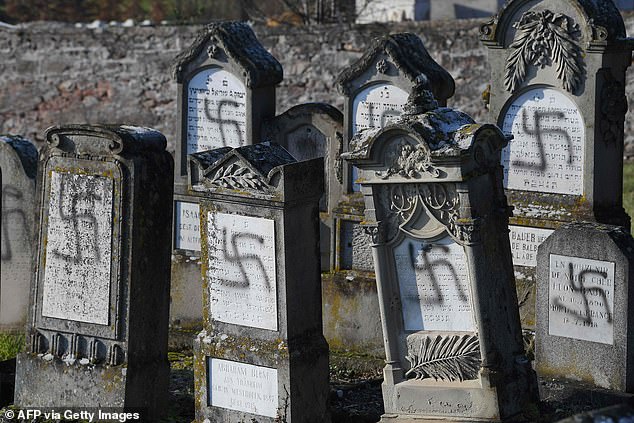 A Jewish cemetery was attacked in eastern France last month, with 107 Jewish graves being desecrated with Nazi symbols. It came hours before French lawmakers adopted a resolution equating anti-Zionism with anti-Semitism.

In the UK, Jeremy Corbyn’s Labour party has come under sustained and repeated criticism for failing to handle anti-Semitism in its ranks.

A global survey by the US-based Anti-Defamation League in November found an increase in anti-Semitic attitudes across many places, but significantly in Eastern and Central Europe.

It also found that large percentages of people in Eastern and Western European countries think Jews talk too much about the Holocaust, with 78 per cent of people asked in Poland giving this view. 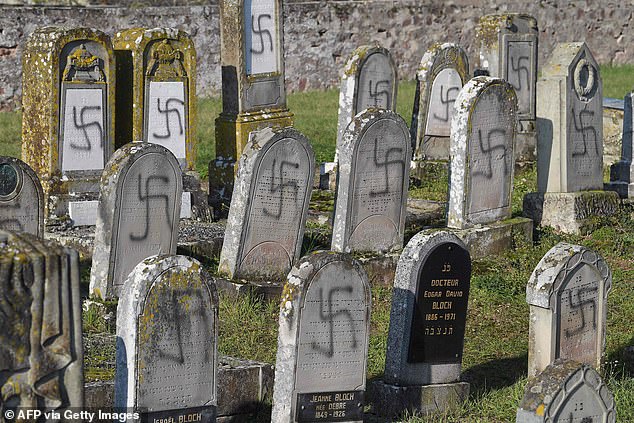 The attack came hours before French lawmakers adopted a resolution equating Anti-Zionism with Anti-Semitism. (Attacked graves are pictured above) 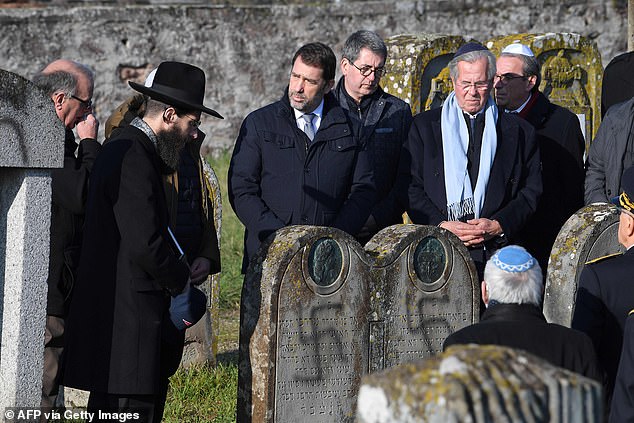 France has Europe’s largest Jewish population. Anti-Semitic attacks in the country are common, with 500 alone in 2018

The Nazis and their collaborators killed about six million Jews in their attempt to exterminate European Jewry. Millions of others were also killed, including homosexuals, gypsies and political dissenters.

Francis, who visited Auschwitz in 2016, said remembering the Holocaust was vital to ensure that similar atrocities do not happen again.

‘If we lose our memory, we destroy our future. May the anniversary of the unspeakable cruelty that humanity learned of seventy-five years ago serve as a summons to pause, to be still and to remember. We need to do this, lest we become indifferent,’ he said.