Psychology: Babies who stare at illusions become more curious children – and may be more intelligent

Babies who seem the most captivated by magic tricks go on to become more curious children — and may also be more intelligent — a study has found.

Researchers from the Johns Hopkins University in Baltimore studied the curiosity of infants from the age of 11 months to three years.

They found that the children’s interest in seemingly magical events — like a floating toy or a ball that passed through a wall — remained constant as they developed.

Furthermore, the babies who appeared most intrigued by such illusions went on to become more curious toddlers, the team found.

‘Something about a baby’s curiosity about magic tricks is predicting how curious they become as pre-schoolers,’ said study co-author Lisa Feigenson.

‘What the data suggest is that some three-year-olds have a leg up or seem particularly well positioned to learn a lot about the world.’

THE MAGIC OF MAGIC

Past research in Professor Feigenson’s lab has suggested that witnessing ‘magical’ events — like a ball appearing to pass through a wall — provides babies with a learning opportunity.

Their latest study, meanwhile, shows that some babies appear to be better at spotting these surprising events in the first place.

This indicates that some children may be better positioned to learn — or, at least, in a way that uses the unexpected as leverage to think more deeply about the world.

Until now, little had been known about curiosity in the pre-verbal mind, with the phenomenon having predominantly been studied in older children and adults.

According to Professor Feigenson and fellow study author Jasmin Perez — both psychologists at the Johns Hopkins — the research was motivated by an ongoing frustration with a classic approach to studying infant cognition.

In such experiments, babies are shown both regular objects and those that behave unexpectedly. Most tend to spend more time looking at the latter — for example, a toy car that floats in mid-air or a ball that seems to pass through a wall.

Other infants, meanwhile, will take a quick glance at these surprising things and then just seem to lose interest.

Experts have assumed that this is a product of ‘babies being babies’ —explaining away the latter cases by proposing that those children were just, for example, hungry or distracted. But the researchers began to question this.

‘We started to wonder if maybe all of that individual variability is actually meaningful, and tells us that babies are responding to the world differently,’ Ms Perez said.

To investigate, the researchers recruited 65 babies — who were aged 11 months at the start of the study — and showed them either a toy that behaved normally or one that seemed to pass straight through a solid wall.

Later, when the infants had reached around a year-and-a-half old, the team instead showed them a new toy that either behaved normally or seemed to float in mid-air.

‘Babies are affected by these magical events in different ways, and these ways appear to be stable across a six-month period during infancy.’

The team also noted that the least curious babies tended to remain disinterested by the time of the second test. 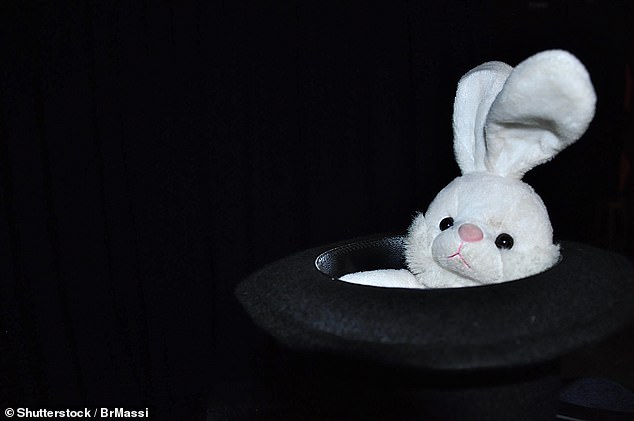 The final part of the study — which took place when the children had reached the age of three — had to be tweaked to accommodate COVID-related restrictions.

The team sent each child’s parents standardised curiosity questionnaires, to see whether the earlier differences in the babies was predictive of future thinking.

The results suggested that the babies who had previously stared for the longest at the strange events were the ones that parents tended to rate as being most curious in an information-seeking, problem-solving way.

This, the researchers said, is the type of curiosity most likely to help children learn about the world around them.

With their initial study complete, the researchers are now looking to keep tabs on the babies to see how long-lasting and significant their initial differences become.

‘One reason these results are exciting is they open the door to so many other important questions,’ Professor Feigenson said.

‘What does it mean for the children in the future? Are these kids also rated as most curious in middle school? Are those kids going to score highest on school achievement tests or IQ tests?’

‘These results are screaming out for longitudinal follow-up.’

The full findings of the study were published in the journal Proceedings of National Academy of Sciences.

HOW IMPORTANT IS BABY BABBLE?

They say that chatting to babies under the age of one helps them make friends, as well as making them brighter because they are better able to discover the world around them.

There is some debate about how important it is and also if adults should use their normal voice.

Speaking more slowly, using a sing-song voice, and using strange words are commonplace when talking to tiny tots, but past research found that it may be detrimental to a child.

Conflicting research claims the high-pitched voice used when talking to a baby is essential.

‘Baby talk’ is believed by many to help with developing early speech and language skills.

These are associated with success in developing reading, writing, and interpersonal skills, both later in childhood and later in life.

Long before they can speak clearly, babies understand the general meaning of what you’re saying.

This bond is important in their development and happiness.