Theresa May to announce £2bn pay rise for public sector staff – with nurses, teachers and police set for biggest rise in six years

Two million public sector workers including police officers, soldiers and teachers are to be given above-inflation pay rises, according to reports.

Next week, the Treasury will unveil the biggest public sector pay rise for six years, at an estimated cost of £2 billion.

The reported rise comes amid concerns that the private sector is pushing ahead on salaries.

Police officers will receive a 2.5 per cent pay rise across the board under Treasury plans due to be announced next week 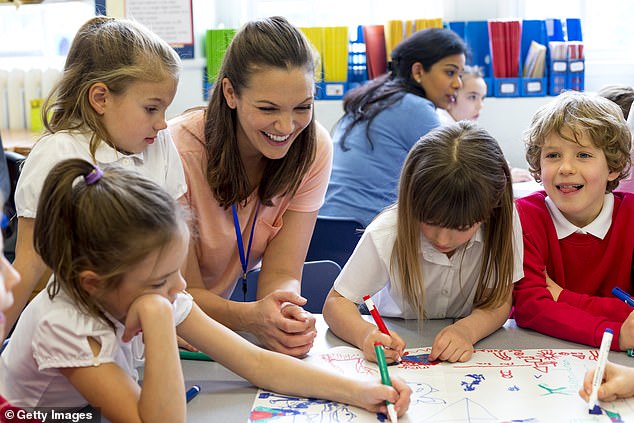 Teachers are expected to see their pay increase by 2.75 per cent under the plans

Police officers will receive a 2.5 per cent pay rise across the board, soldiers 2.9 per cent and teachers and other school staff 2.75 per cent, the Times reported.

Dentists and consultants will get 2.5 per cent and senior civil servants 2 per cent, it said.

However, the Treasury is expected to make clear that, with the exception of some extra funding for schools, there will be no new money and the rises will have to come from existing budgets.

The move will represent one of Theresa May’s last acts as prime minister after she said austerity had come to an end.

For most public sector workers their pay increase will be higher than the 2 per cent rate of inflation.

There will be a rise of 2.5 per cent for police from September. There will also be a 2.5 per cent rise for all members of the armed forces. The salary for the lowest-paid army privates will go up from £19,025 to £20,000.

Mrs May has made clear that pay increases for soldiers and other forces personnel are the ‘right priority’ given their ‘vital importance’ and ‘hard work and self- sacrifice’ in protecting Britain.

There will also be a 2.75 per cent increase for teachers across all pay ranges and allowances. The rises will still be based on individual performance.

Public sector pay rises were capped at 1 per cent under David Cameron between 2013 and 2016. Mrs May continued with the cap until last year.

The rises, which will reportedly be announced next week, do not apply to other public sector staff, such as more junior civil servants and nurses, whose pay is dealt with separately.

Jonathan Cribb, a senior research economist at the Institute for Fiscal Studies, told the paper: ‘These public sector pay rises are higher than last year’s and considerably higher than the 1 per cent for many years before that.

‘It is the highest nominal pay increase since the coalition. But these increases are still slower than pay rises that are happening on average in the private sector. With the partial exception of schools, there seems to be no new money to fund these pay rises, meaning savings will have to be made elsewhere.’ The health secretary, Matt Hancock, who is an ally of Mr Johnson, said this month that the likely winner would ‘show some love’ to public sector workers to ‘properly reward’ them for the job they were doing.

Mr Johnson subsequently distanced himself from Mr Hancock’s comments. He said: ‘Of course he’s right, we are going to make sure that we properly fund our public services.

‘It’s very important when you’re in charge of a great public service…you’ve got to make sure that you understand their cares and their needs. And the only way to get the reform that you sometimes need in public services is to be their champion.’