Red Bull Salzburg manager Jesse Marsch demanded his side ‘be more ruthless against Virgil van Dijk’ and ‘f****** raise our fight’ during a fiery half-time team talk in their defeat at Liverpool on Wednesday night.

The Austrian side gave the Premier League giants a huge scare in the Champions League group game, coming from 3-0 down to level at 3-3 before Mohamed Salah scored the winner late on.

After the Reds stormed into a three-goal lead, Hwang Hee-chan pulled one back for the visitors before the break and Marsch did not hold back after witnessing an underwhelming display. 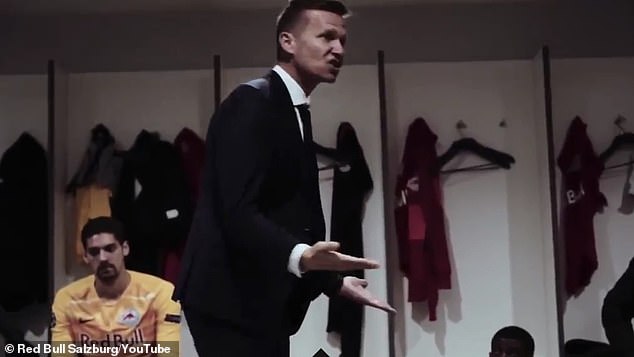 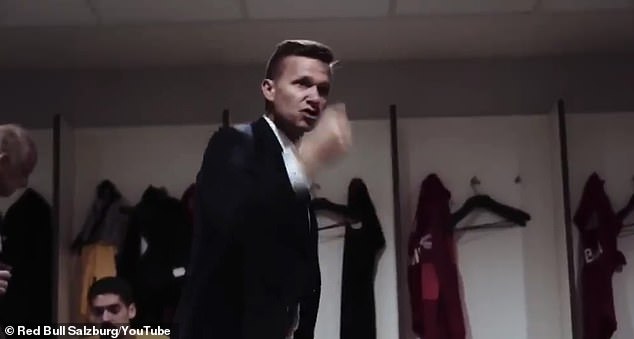 Great insight into the half-time talk from Jesse Marsch in their game vs Liverpool.

Speaking mostly in German, he said: ‘Firstly, how many fouls have we committed? Maybe two?.

‘It’s not a f*****g friendly, it’s a Champions League match. We’ve got to play more physical and get stuck in. Be more ruthless against Van Dijk, we play with too much respect. Too much respect.

‘Are they strong? Yes. But it doesn’t mean that we should be nice to them and don’t tackle them or fight.

‘They have to feel us guys, they have to know we’re f*****g here to compete, not just that we’re here to stylistically going to try and play the same way, but we came to f*****g play.

‘We’re going to talk about tactics but when we step on to that field with more confidence and will. Now it’s us against them. Let’s f*****g raise our will, our fight.

‘We’ve seen that they are strong but we can do better and breathe life into our game.

‘Self-confidence, physicality, that’s what it’s all about. They are not so dangerous with set-pieces. Come on, we have more to offer.’ 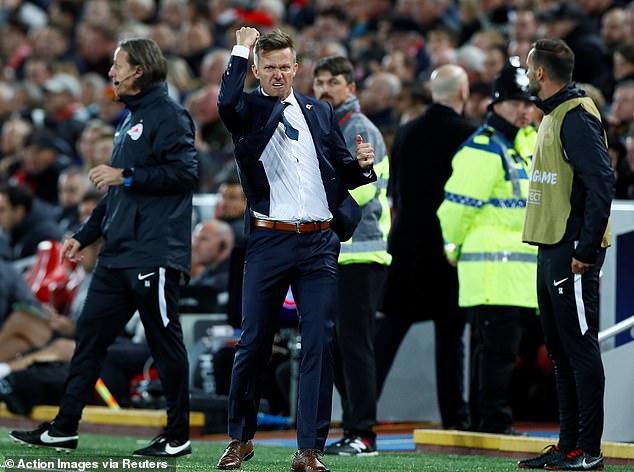 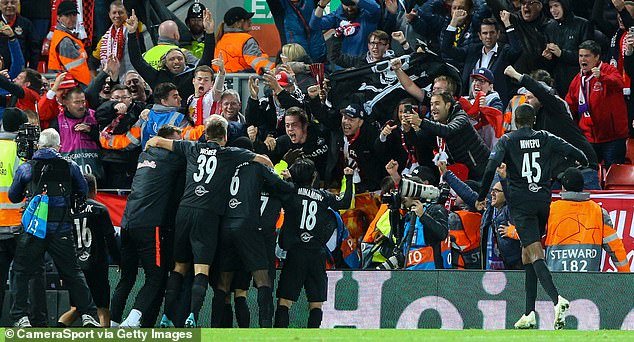 His message was clearly understood as the Austrian side staged a terrific comeback to level things at 3-3, courtesy of substitute Erling Haaland’s close-range finish, to stun Jurgen Klopp and the whole of Anfield.

Marsch’s visible energy proved to be too much for some though as his exuberance on the touchline spilled over in the second half.

Peter Crouch was particularly critical of the American after he ran down the touchline following his side’s equaliser.

‘Just ridiculous to get it back to 3-3, it’s amazing. The coach got a little carried away to be honest,’ Crouch told BT Sport.

‘I can understand it definitely but he still had half an hour to go, so he might have regretted it.

‘I still fancied Liverpool because they were playing so well going forward but it got nervy.’