Republicans are seeing a boost in their fortunes looking ahead to November as a new Fox News Channel poll only shows their generic candidate five points behind the Democratic one.

When registered voters were polled in October, GOP candidates had fallen 15 points behind, with just 35 per cent of respondents choosing a Republican, and 50 per cent choosing a Democrat.

The poll comes as President Trump has asked supporters to vote him in allies to Capitol Hill, as he’s struggled to get much of his agenda passed through Congress.

SOMETHING TO SMILE ABOUT: A fresh Fox News poll found that the Republican Party is now only five points down against the Democrats when registered voters were asked to choose a generic candidate ahead of the 2018 midterm elections 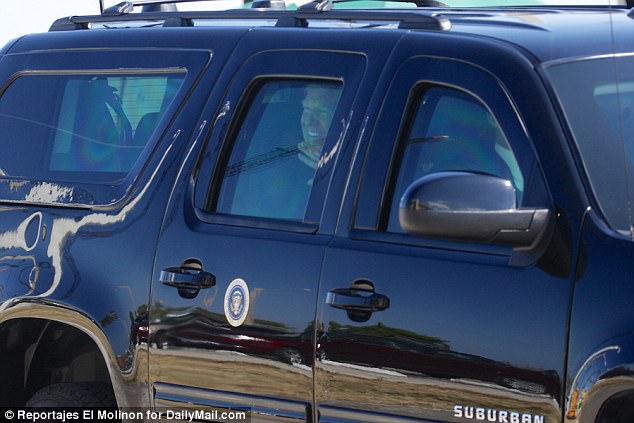 The poll found that nearly half of those surveyed thought President Trump – pictured leaving Mar-a-Lago on Sunday – was doing a good job on taxes, while overall American were less nervous about the economy than they have been in the past eight years

‘No more obstruction! We want what we voted for! But it cannot happen unless we put up GREAT candidates who stand by our values and prove to American that they have the fire to fight to Make America Great Again!’ Trump said in a weekend email plea.

If Democrats take back the House, that will only make the president’s job harder.

Republican pollster Daron Shaw suggested that with these latest numbers, the chance of Democrats being able to pull that off is on the fence.

‘Just winning the popular national vote is not enough to flip the House,’ Shaw said. ‘Given the GOP’s districting advantages, data from 2012 and 2014 show the Democrats need an edge of at least five points to bring the majority into play.’

Currently 46 per cent of voters would chose a Democratic candidate, while 41 per cent would choose the Republican.

Shaw’s polling partner, Democrat Chris Anderson, said it’s too early to read much into these numbers.

‘I like this question as a gauge of perceptions month to month,’ Anderson said. ‘But its predictive power seven months before the election is dubious.’

Anderson pointed out that in March of 2014, Democrats had a 2-point advantage over the Republicans.

Come fall the Republicans, who already had a majority in the House, picked up another 13 seats.

Additionally the Democrats lost control of the Senate.

Democrats are likely hoping that a March 2010 poll is more on par with what happens in November.

Back then, Republicans had a 4-point advantage, similar to the Democratic advantage now.

The GOP went on to win 63 House seats and gain control of the House after a Democratic president had been in the White House for two years.

Historically a president’s first set of midterms equals a political spanking for his party.

The Fox News poll found that enthusiasm is on the Democrats’ side.

Overall, 36 per cent of registered voters said they were more enthusiastic about this year’s midterms than they had been for previous Congressional elections.

Among those who said they were more enthusiastic, 60 per cent said they preferred the Democratic candidate, versus 33 per cent who wished to vote Republican.

Republicans, on the other hand, led among the voters who feel ‘about the same’ about this year’s election.

Forty-eight per cent of those voters preferred a GOP hopeful, over 38 per cent who said they’d vote Democrat.

It’ll be up to Trump and his fellow Republicans to try and get GOP voters more enthused.

The new poll found that Trump now receives a positive job rating on taxes, as his tax package was the only piece of major legislation that got passed during his first year.

Trump has been talking about a ‘phase two’ in tax cuts, which would give Republican candidates something else to run on before the fall.

There’s other good news tucked into the poll as well for Trump, as less than half of the Americans surveyed – 47 per cent – said they were ‘nervous’ about the economy.

That’s down from a high point of 70 per cent in 2010, as the country was still feeling pain from the 2008 financial crisis.