This season the Champions League is their priority. Their stranglehold on Serie A appears unbreakable. That’s what happens when you win the league for seven consecutive years and your main rivals (Napoli and Roma) lose highly influential figures during the close season.

The European Cup, now the Champions League, has not been such a happy hunting ground for the Vecchia Signora (Old Lady) though. They have only lifted it twice, in 1985 and 1996, and have lost a record seven finals. 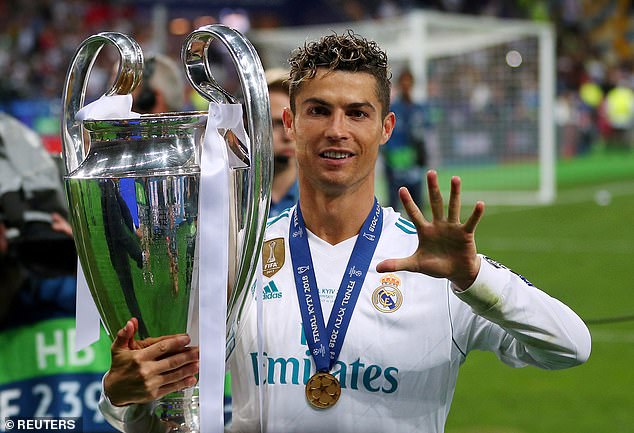 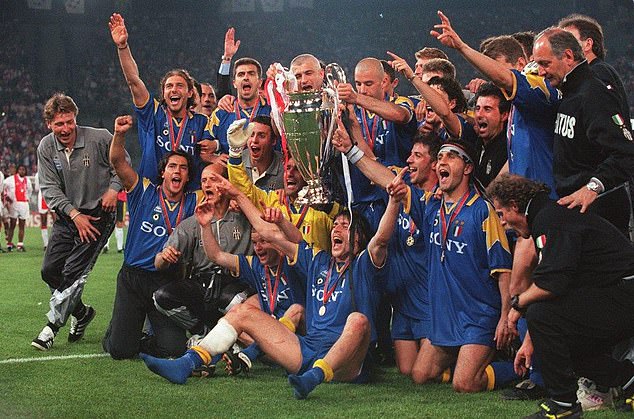 Juve have lifted the European Cup only twice, in 1985 and most recently here in 1996

To get their hands back on the ‘cup with the big ears’, they enlisted the man who has dominated the tournament over the last decade.

Signing Cristiano Ronaldo was a masterstroke in many ways. The Portuguese was their direct nemesis over the last two campaigns, scoring twice against them in the 2017 final, and grabbing three goals over the two-legged quarter-final last season. Ronaldo was a one-man roadblock between the Bianconeri and the European crown.

But now he is one of them. Taking recent victories into consideration, and showing due deference to Mr L Messi of Catalonia, CR7 is the King of the Champions League. He is therefore a natural fit for the club determined to rule the continent once again.

Not that Massimiliano Allegri’s team are easing up domestically, unfortunately for the rest of Serie A. There is no chance of that ever happening.

But make no mistake, CR7 was recruited to make the difference in Europe. The ex-Manchester United forward has been asked to provide the extra quality that Gonzalo Higuain couldn’t bring after his £75million arrival from Napoli in 2016.

The Champions League had long been a painful subject for fans and previous regimes. An evasive target, a seemingly impossible quest. 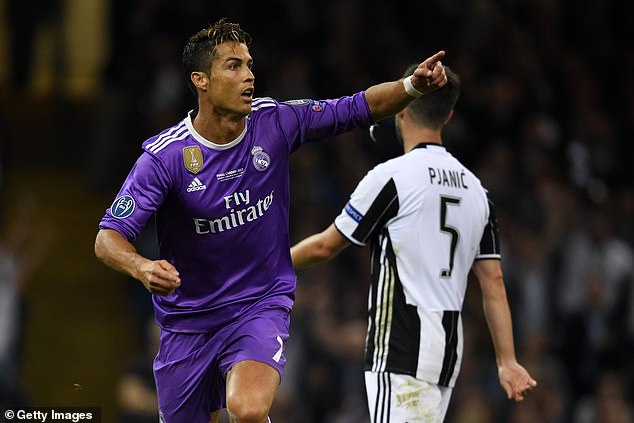 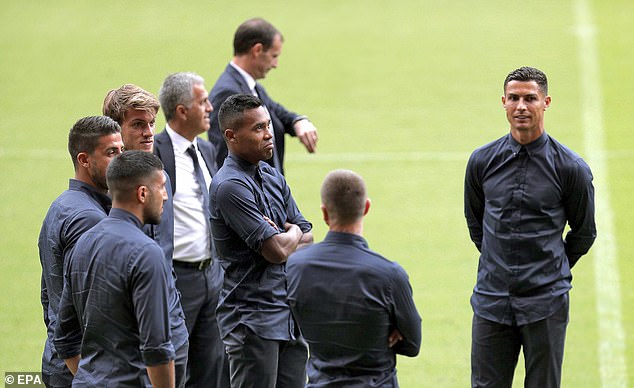 But now the goal machine, seen at Valencia’s Mestalla on Tuesday, is one of them

Former coach Antonio Conte complained about financial disparity with juggernauts like Real Madrid, Barcelona and Bayern Munich. His famous quip was ‘you can’t eat in a €100-a-head restaurant if you have only got €10.’

But president Andrea Agnelli wasn’t so defeatist and has never hidden his desire to win the club’s third European Cup. Last year Agnelli admitted the tournament was ‘an objective, no longer a dream.’

Allegri came close to breaking the hoodoo in 2015 and 2017. He guided Juve to the final, but on both occasions the Spanish galleons of Barcelona and Real threw them onto the rocks. Despite those traumatic nights, Allegri has found the right formula. Under his command the team has only lost one knockout tie in normal time (last season at the Bernabeu). 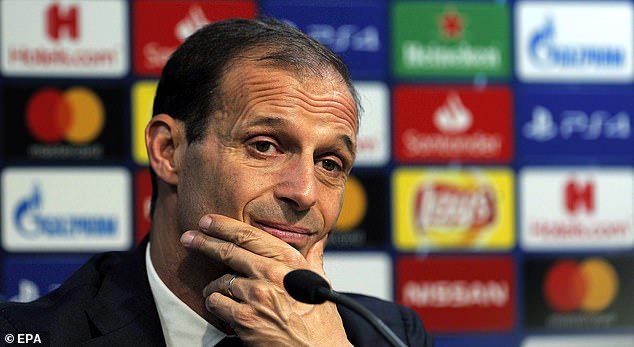 Massimiliano Allegri has come close to breaking the hoodoo, reaching finals in 2015 and 2017 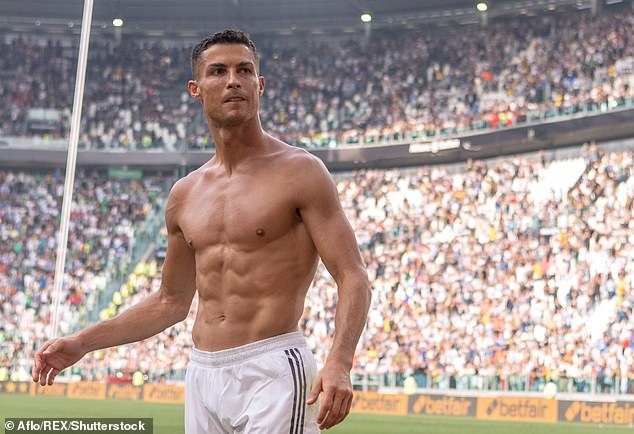 Agnelli and the fans hope Ronaldo will be the vital component to facilitate glory. But he isn’t the only inspired signing from Portugal. Right back Joao Cancelo, who cost £35.5m from Valencia, has been brilliant this season.

His athleticism and verve were evident straight away, but he is also improving his defensive capabilities every week. Training with Juve’s ageing masters Andrea Barzagli and Giorgio Chiellini is having a positive effect. Allegri plays with ‘belt and braces’ in Europe, but Cancelo gives the slim coach a valuable attacking option.

Juve’s squad depth is remarkable. In the same way that Manchester City’s second string is formidable team, the Bianconeri’s reserves are staggering. Italian international goalkeeper Mattia Perin, Morocco captain Mehdi Benatia, powerful winger Federico Bernardeschi and Colombian speed merchant Juan Cuadrado aren’t confirmed starters every week. They would be at most other clubs on the planet.

The departure of Gianluigi Buffon might make an impact. The veteran often saved his best performances for European duty. Wojciech Szczesny appears to have eliminated the lapses and gaffes that punctuated his early days, and looks at home in the No 1 shirt, but he can never fully replace Buffon. Nobody ever will. 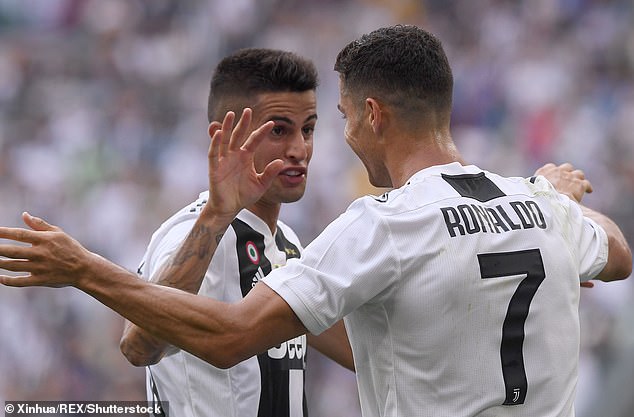 Joao Cancelo (L), who cost £35.5m from Valencia, is another inspired Portuguese signing

The Old Lady’s immediate prospects look bright after they were placed in a manageable group. Captain Chiellini and Co will tussle with Manchester United, Valencia and Young Boys of Bern. The clashes with United caught the eye instantly. Ronaldo is going ‘home’, and Paul Pogba will see old friends again.

It is also another duel between the Bianconeri and Jose Mourinho. But the landscape is vastly different to the last time the Vecchia Signora crossed swords with the Special One.

The Juventus of 2008-2010 was immeasurably inferior to the current incarnation. They were rebuilding after their relegation to Serie B. The days of CR7, or even Andrea Pirlo in black and white stripes, seemed light years away.

And much to Juve’s relief, Mourinho’s United are not comparable to his Inter side which won the first and only Treble in Italian history in 2010. Valencia and Young Boys will be granted the respect all Champions League team deserve, but aren’t expected to trouble the Serie A champions. 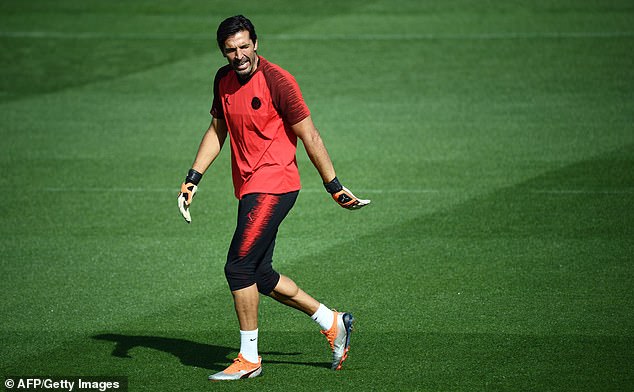 The departure of Gianluigi Buffon may make an impact, he was often at his best in Europe

Valencia host the Italians on Wednesday night, and their coach Marcelino defined Allegri’s group succinctly, saying: ‘Juve have got a lot of patience, they know how to exploit the mistakes. They have got a great collective capacity to regroup, and at the same time possess great individual quality.’

A club with the resources and experience of Juventus can battle on multiple fronts. There is no possibility of them sacrificing the league to go far in Europe, as Real Madrid have done on a few occasions.

It feels different this season. The Bianconeri are really concentrating on the Champions League, and they don’t care who knows. At the draw in August director Giuseppe Marotta said: ‘We know we are among the favourites, we aren’t going to hide.’

Just like their new focal point Ronaldo, Juventus are brash and blunt about their objectives. The rest have been warned.