San Jose teacher, 35, SMILES in his mugshot after being arrested with loaded gun in his satchel

San Jose teacher, 35, SMILES in his mugshot after being arrested in his classroom with a loaded gun in his satchel for months-old road rage incident where he ‘attacked another driver and stole their cell phone’

Charles So, 35, was arrested on Wednesday at the middle school where he teaches in San Jose

A San Jose teacher has been arrested over his alleged involvement in a road rage incident.

Charles So, was taken into custody after being found in his classroom with a loaded gun on Wednesday.

The road rage incident occurred on February 21. Police say it escalated to So attacking another man and stealing his cell phone.

It is not clear how the argument began or what finally led police to his classroom at Chaboya Middle School.

He was arrested at the end of the day on Wednesday and his gun was in his satchel. After being arrested, So, who is an eighth grade arts and language teacher, smiled in his mugshot.

The school insists he had no prior record and passed background and finger print checks as recently as August 19.

He was not working at the school at the time of the road rage incident.

‘This is the first time this teacher’s name has actually come to my attention, and that’s kind of what you want at the beginning of the year.

‘You want teachers that are just going to work with our kids and have a great start to the year. This is anything but,’ school district spokesperson Charles Crosby told ABC news.

He added: ‘There was nothing in the record to show that there was anything we should worry about. That’s another issue that we would like a little clarity on because it’s troubling.’

Parents were shocked by his arrest on Thursday.

He was booked into county jail on two felony charges; robbery and possession of a firearm inside a school. 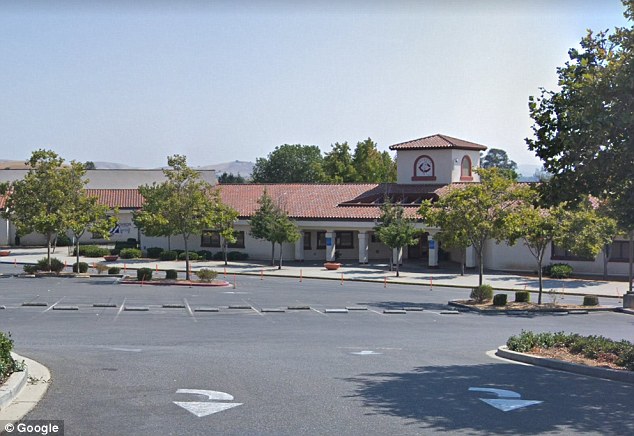