There can be no repetition but there is undoubtedly some hesitation in unveiling the future of the BBC’s best-loved and longest-running radio programme, Just A Minute.

The BBC tells me that its special Radio 4 tribute to late presenter Nicholas Parsons on what would have been his 97th birthday — October 10 — will be celebrating his career and life and the programme.

But there will be no announcement about the identity of Parsons’s successor, nor, indeed, about whether the programme even has a future.

This is a cause of concern for Malcolm Messiter, who owns the show devised by his father Ian. JAM made its debut in 1967, with Parsons chairing a panel of four contestants.

‘Malcolm’s very protective of Just A Minute and doesn’t want it to fall victim to the woke brigade,’ a family friend tells me. ‘Nicholas is a tough act to follow and he wants a worthy host to succeed him.

‘The truth is Messiter could take the show elsewhere if he doesn’t like the BBC’s choice of successor.’

Malcolm Messiter, 71, a professional oboist, admits he’s taking an intense interest in the programme’s fate and does not want the format changed.

‘I owe it to my father,’ Malcolm, who has attended the recording of almost every episode, tells me.

‘The subjects about which they [the panellists] must talk can be absolutely anything. I contribute these myself, and they are unavoidably contemporary.’

Parsons presented the show for 52 years, barely missing an episode until his health began to falter in the months before his death, aged 96, in January this year.

Guests are invited to talk on a subject for one minute without hesitation, repetition and deviation. 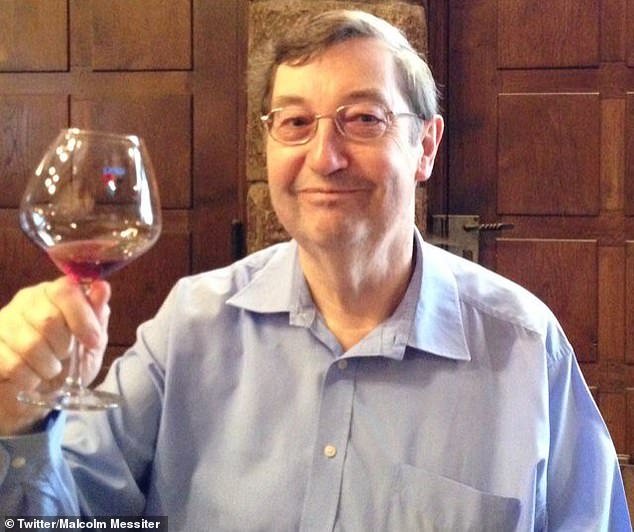 This is a cause of concern for Malcolm Messiter (pictured), who owns the show devised by his father Ian

The irrepressible Gyles Brandreth, who deputised for Parsons on two occasions in 2018, is tipped as a possible successor.

Others include Kit Hesketh-Harvey and Miles Jupp.

Hesketh-Harvey tells me the successful candidate should be ‘unflappable, unshockable, in the tradition of Humphrey Lyttelton, Kenneth Horne and Nicholas [Parsons], like a minor headmaster of a minor public school dealing with the naughty schoolboys pitching themselves against Auntie BBC’.

Brian Cox might be getting plaudits for his role as media mogul in TV drama Succession, but he still seems bitter that his 2017 biopic Churchill, in which he played the wartime premier, was eclipsed by rival film Darkest Hour, which was released the same year and won Gary Oldman an Oscar.

‘I was very proud of what I did in Churchill, but they weren’t prepared to promote it,’ Cox says. ‘I think they got scared off by Gary’s film. I saw five minutes of it and I wasn’t particularly impressed. It wasn’t Gary, it was the film itself. I just saw this ridiculous scene in the Underground and went: “Come on! What is this? This is joke time.’ ” He’ll fight them on the red carpet . . .

Damian gets it all off his chest on selfie safari

Elizabeth Hurley’s son Damian could have caught a bit of a chill exposing his lithe torso to his Instagram followers.

He declared he was on a photographic expedition. ‘Today on an expedition armed with @canonuk how was your day?’ wrote the 18-year-old, who takes his mother’s bikini snaps.

The use of the word ‘armed’ is interesting. The scenery is more leafy Cotswolds than African bush. But Damian looks the part of an intrepid explorer — long hair tied back in a pony tail and chunky gold chain around his neck. The exposed whities are the only detraction. 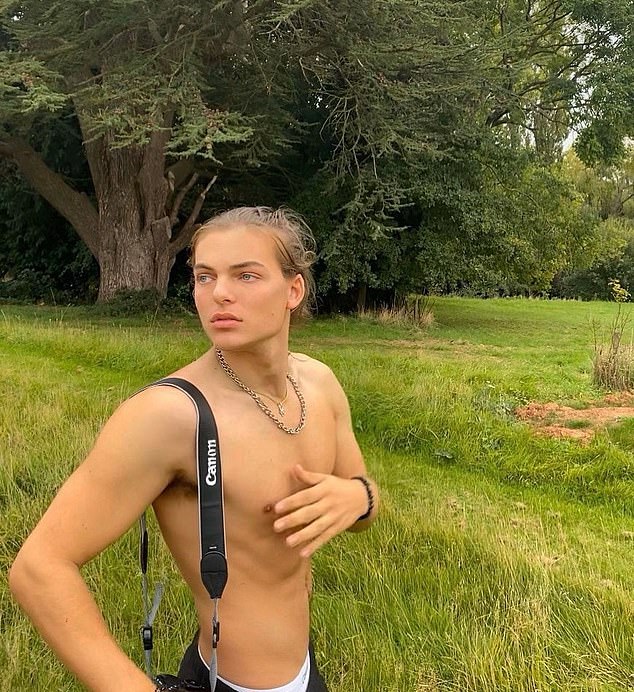 While many of us hope to see festivals return next summer, Gavin & Stacey star Ruth Jones won’t be among them. ‘I did go to Glastonbury with my two stepdaughters once,’ the actress and writer says. ‘It was just awful and very, very muddy. I got there on the Saturday night. I had a really good night’s sleep in the tent. I woke up in the morning and heard the Yeovil Brass Band rehearsing, and just decided to leave — I couldn’t stand it. That’s the only music I heard.’

How’s this for a contrast? Tycoon Sir Richard Branson has a reputed fortune of £3.6 billion, but the man who co-founded Virgin Records with him, Nik Powell, has left an estate of less than £500,000.

Powell, who was married to Puppet On A String singer Sandie Shaw, sold his Virgin shares to Branson for £1million in 1982. And by the time of his death last November aged 69, he had an estate of £844,434, probate documents reveal. Once his outstanding affairs were settled, just over £494,000 was left. He did not make a will, so his estate will go to his adult children, Jack and Amie.

After releasing such hits as Mike Oldfield’s Tubular Bells and the Sex Pistols’ Never Mind The Bollocks with Branson, Powell left Virgin to set up a film company, Palace Pictures. It produced a series of cult movies including The Company Of Wolves, Paris, Texas, When Harry Met Sally, and The Crying Game.

Cowgirl Cara on the fashion fringe!

Yeehaw! Cara Delevingne was in a playful mood when she posed for this picture dressed up as a cowgirl — however it seems she forgot to do up her fringed jacket. 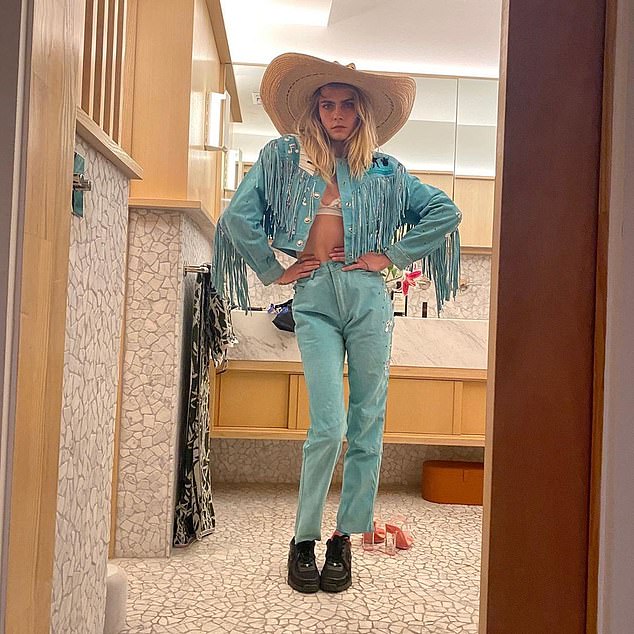 The 28-year-old model teamed her turquoise ensemble with a sombrero and a pair of clunky black shoes which she would have struggled to fit into a pair of stirrups.

Cara is not one to gallop away from the camera and a tell-tale pair of pink party shoes on the floor of what looks like her bathroom indicates that her get-up was decided on the spur of the moment.

You might have thought that as the daughter of Primrose Hill set stalwart Pearl Lowe and rock star Gavin Rossdale, something as prosaic as a pension would be far from Daisy Lowe’s mind.

But the model is learning to make better financial choices after she admits to squandering a lot of money in her youth.

‘I definitely felt guilty for earning a lot more money than my peers,’ she says, ‘so my way of relinquishing that guilt was to just share it and spend it on everyone else. I just always thought I was going to earn like that and there was absolutely no planning for what I wanted to do in the future.’

The 31-year-old says she has become thriftier. ‘Since I’ve hit my 30s, I’ve realised I need to start investing in things like art.

‘Financial advice is not taught and I think it should be taught at schools.’ 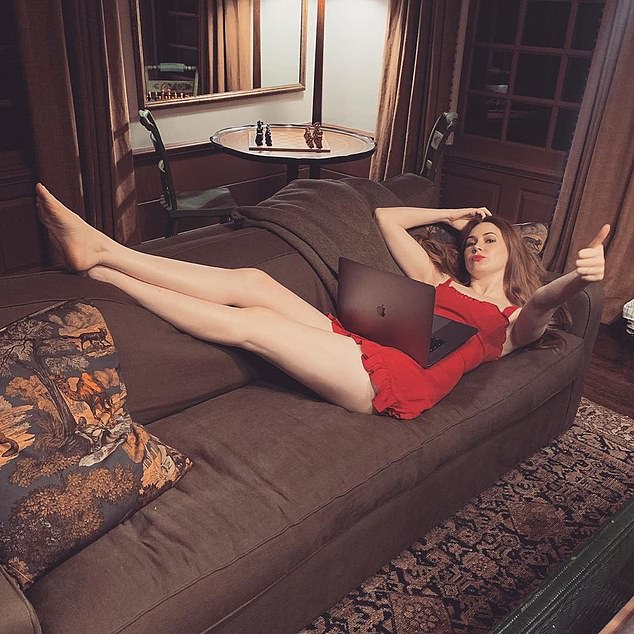 Karen Gillan (pictured), 32, who played the Time Lord’s assistant alongside Matt Smith , is still keen to put on a leggy display long after she has left the programme

Who’s having a leisurely lockdown?

She caused a stir after appearing in Doctor Who clad in the skimpiest of outfits.

Karen Gillan, 32, who played the Time Lord’s assistant alongside Matt Smith , is still keen to put on a leggy display long after she has left the programme. The actress reveals she has been watching Milan Fashion Week from the comfort of her own home in Los Angeles. ‘I’m watching the new Prada show lockdown style,’ she said alongside this image. ‘ Thanks for the shortbread. And the invite.

‘But mostly for the shortbread. Bloody well done from me and my getaway sticks.’

And she didn’t even have to don a facemask.

With just about every minor celebrity presenting a travel show these days, Pointless’s Richard Osman says he refuses all approaches as he prefers his home comforts. ‘Sometimes I get the chance to front travel documentaries. But I love being at home. Plus, on TV it looks glamorous and I know it isn’t. They don’t show the 12-hour trip in the mini van.’