An interactive online map showing routes taken by users of an exercise tracking app reveals potentially sensitive information about American and allied military personnel across the world, including in Afghanistan, Iraq and Syria.

Published by the GPS tracking company Strava, it uses satellite information to map the locations and movements of subscribers to the company’s fitness service over a two-year period, by illuminating areas of activity.

It shows a great deal of activity in the United States and Europe, but in war zones and deserts in countries like Iraq, Djibouti and Syria, the heat map becomes almost entirely dark — except for scattered evidence of activity.

A closer look at those areas brings into focus the locations and outlines of well-known US military bases, as well as other lesser-known and potentially sensitive sites — possibly because American soldiers and other personnel are using fitness trackers like Fitbit as they move around.

A map showing routes taken by users of an exercise tracking app reveals potentially sensitive information about American soldiers across the world, including in Iraq (pictured)

The data could provide information to someone who wants to attack or ambush troops.

The map is not live, but shows a pattern of accumulated activity between 2015 and September 2017.

The Global Heat Map was posted online in November 2017, but the information it contains was only publicised recently after Nathan Ruser, an Australian studying international security came across it.

He tweeted about it, prompting other analysts, military experts and ex-soldiers to scour the map for evidence of activity in sensitive locations.

Adam Rawnsley noticed there was a lot of jogging on a beach near a suspected CIA base in Mogadishu, Somalia.

Ben Taub located a US Special Operations base in the Sahel region of Africa.

Another person said he found the site of a Patriot missile system in Yemen. 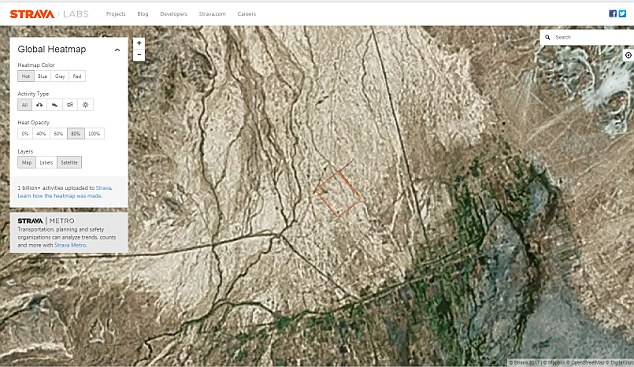 In Afghanistan, Bagram Airfield north of Kabul is a hive of activity, as are several locations in the country’s south and west 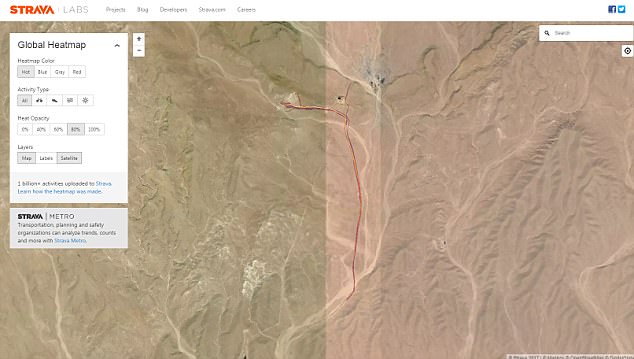 ‘In Syria, known Coalition (i.e. US) bases light up the night,’ one analyst said on Twitter 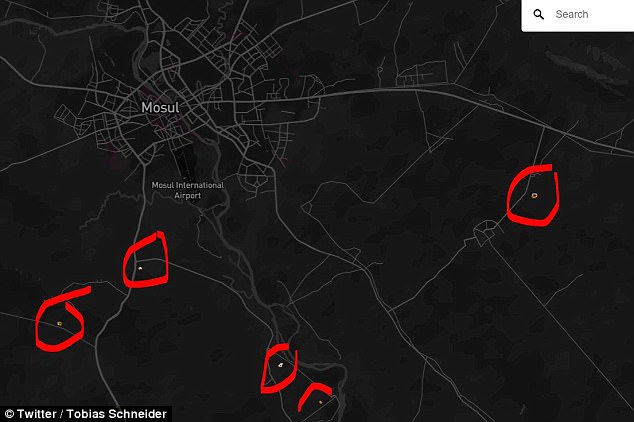 Smaller sites also appear on the map in northern and western Iraq, indicating the presence of other, lesser-known installations

Jack Nelson wrote on Twitter that it took him 30 seconds to find a US air base in Djibouti.

However, since the map doesn’t identify the app’s users, it’s difficult to determine what some sites are.

They could be linked to aid organizations, UN facilities or military bases for other countries, Tobias Schneider, a security analyst who was among the group of people who highlighted the military bases shown on the map, noted.

Schneider also noted that it shows military sites in Syria and Iraq as well as the Madama base used by French forces in Niger.

‘In Syria, known Coalition (i.e. US) bases light up the night. Some light markers over known Russian positions, no notable coloring for Iranian bases,’ Schneider wrote on Twitter.

US troops are deployed in support of local forces battling ISIS in Syria as well as Iraq, while Russian and Iranian units are backing President Bashar al-Assad’s Syria government in that country’s civil war. 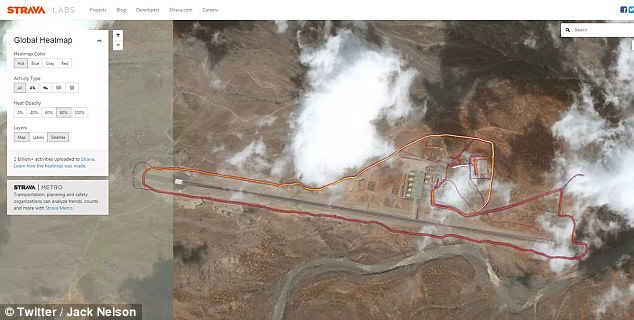 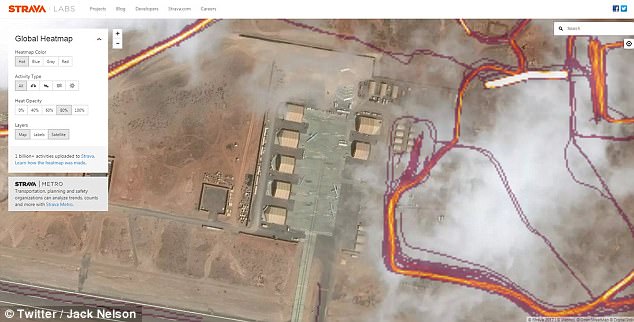 ‘I wonder who’s running around this apparently abandoned airfield in Somalia,’ Jack Nelson wrote alongside these images 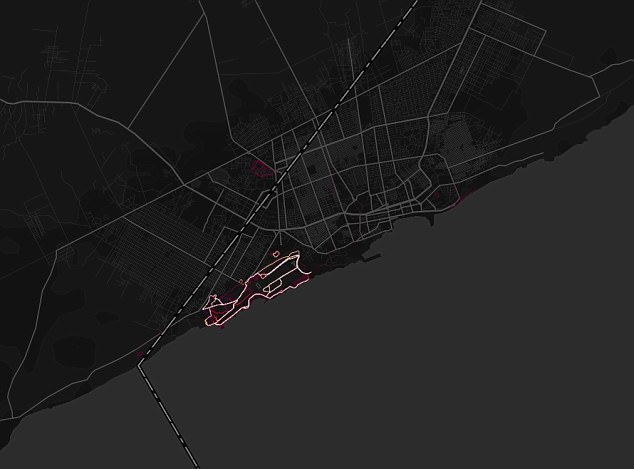 One Twitter user noticed there was a lot of jogging on a beach near a suspected CIA base in Mogadishu, Somalia (above)

‘A lot of people are going to have to sit thru lectures come Monday morning,’ Schneider wrote, referring to soldiers likely to be taken to task for inadvertently revealing sensitive information while trying to keep in shape.

‘Bases are fixed & hard to conceal,’ he wrote, so the ‘biggest potential threat is to tracking movement.’

He added: ‘Think beyond Strava to what creative analysts (from nosy twitter sleuths to *cough* darker forces) can do with even seemingly innocuous bits of meta data.’

While some of the bases are well known to groups that might want to attack them, the map also shows what appear to be routes taken by forces moving outside of bases – information that could be used in planning bombings or ambushes.

The map of Iraq is largely dark, indicating a limited use of the app in the country. 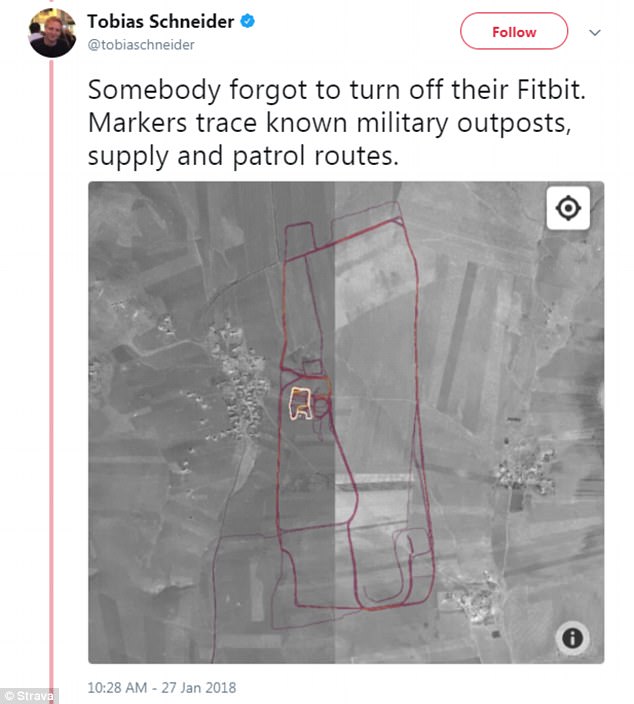 But a series of well-known military bases, where American and allied forces have been deployed as part of their war against the Islamic State terror group, are highlighted in detail.

These include Taji north of Baghdad, Qayyarah south of Mosul and Al-Asad in Anbar Province.

Smaller sites also appear on the map in northern and western Iraq, indicating the presence of other, lesser-known installations.

Stretches of road are also highlighted, indicating that Strava users kept their devices on while traveling, potentially providing details about commonly-taken routes.

In Afghanistan, Bagram Airfield north of Kabul is a hive of activity, as are several locations in the country’s south and west.

And in Syria, Qamishli in the northwest, a stronghold of US-allied Kurdish forces, is clearly visible. 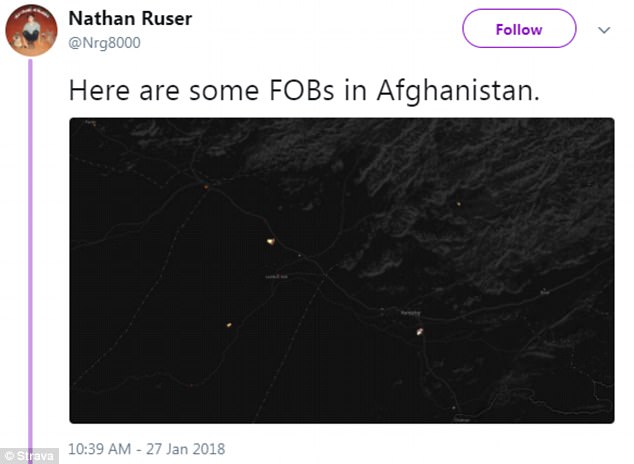 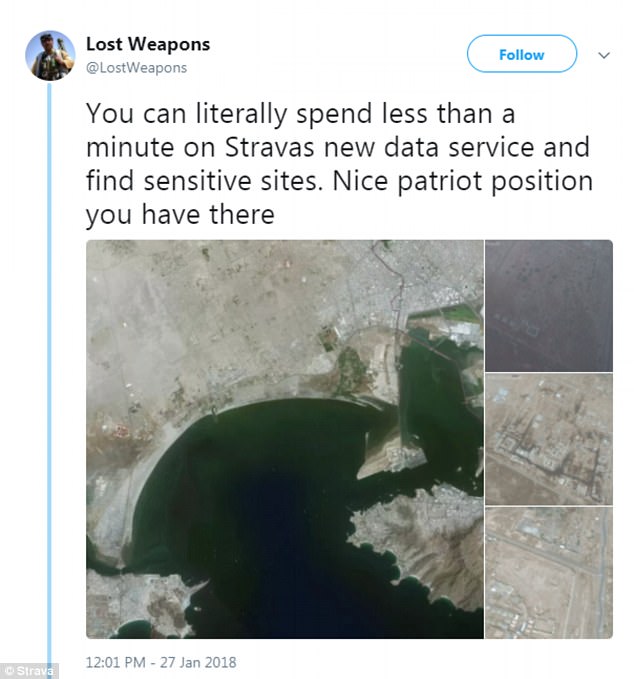 Potentially sensitive information can be gleaned outside of war zones.

A map of the US air force base known as Area 51 near Homey Airport in Nevada shows a cyclist travelling from the base along the edge of Groom Lake.

RAF Mount Pleasant on the Falkland Islands is lit up brightly, revealing the exercise regimen of the 1,000 British soldiers stationed there, according to the Guardian.

Strava says it has 27 million users around the world, including people who own widely available fitness devices, as well as people who directly subscribe to its mobile app.

The map shows the movements of its app users around the world, indicating the intensity of travel along a given path – a ‘direct visualization of Strava’s global network of athletes,’ it says.

But the issue could have been fairly easily avoided. 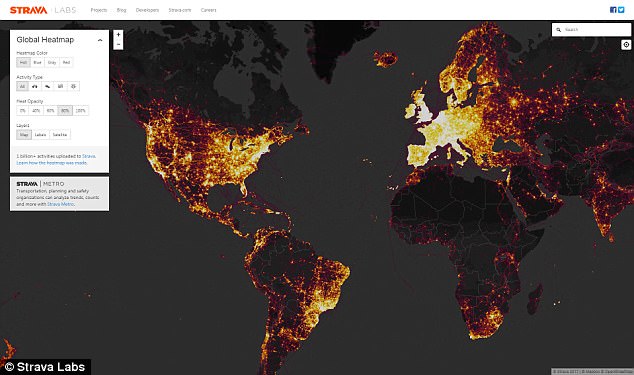 Strava says it has 27 million users around the world, including people who own widely available fitness devices

According to Strava, ‘athletes with the Metro/heatmap opt-out privacy setting have all data excluded’ from the mapping project.

The US Department of Defense has said it is ‘reviewing’ the situation.

‘DoD takes matters like these very seriously and is reviewing the situation to determine if any additional training or guidance is required, and if any additional policy must be developed to ensure the continued safety of DoD personnel at home and abroad,’ Harris said.

The Pentagon ‘recommends limiting public profiles on the internet, including personal social media accounts,’ she said.