Several earthquakes have struck near the summit of Hawaii’s Kilauea volcano, including one with a magnitude of 4.4, officials have reported.

The light tremor was recorded right at the center of the volcano that has been erupting for more than three weeks on Friday afternoon at around 12.45pm.

While the quake wasn’t strong enough to generate a tsunami, the Pacific Tsunami Warning Center has warned of potential aftershocks.

The earthquake activity has been accompanied by almost a month of continuous eruptions on the Big Island, sending massive lava streams tearing across the land and thick clouds of volcanic ash looming in the sky.

Several earthquakes struck near the summit of Hawaii’s Kilauea volcano this week, including one with a magnitude of 4.4 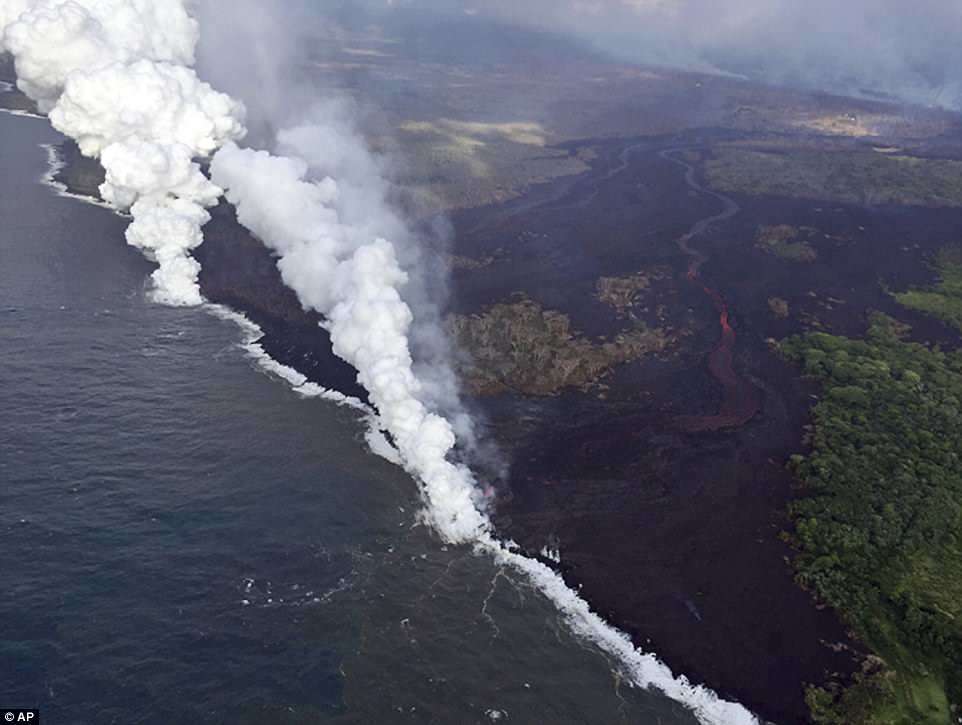 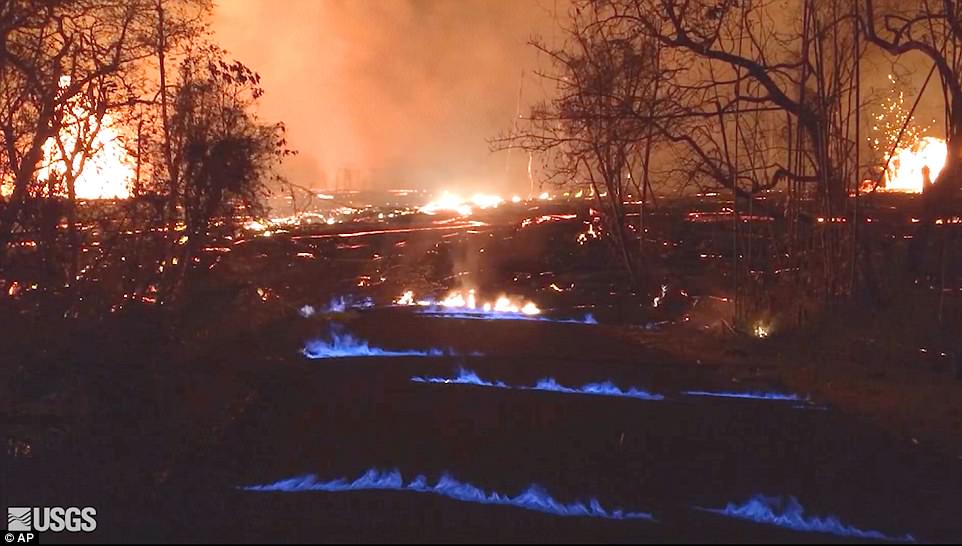 Kilauea’s ongoing eruptions have been captured in hundreds of dramatic photographs, including some of rare blue flames coming out of cracks in the pavement earlier this week.

The blue flames are created when underground methane gas, produced by the volcano, escapes through cracks created by volcanic quakes and ignites from burning lava and vegetation.

US Geological Survey scientist Jim Kauahikaua said this is only the second time that he’s seen the blue flames during an eruption.

The volcano-related earthquakes have caused cracks to open up across the Big Island’s southeastern region.

In one case, a heartbroken family who evacuated during the early eruptions returned home to find their property perched dangerously on top of a massive 10-foot wide crack. 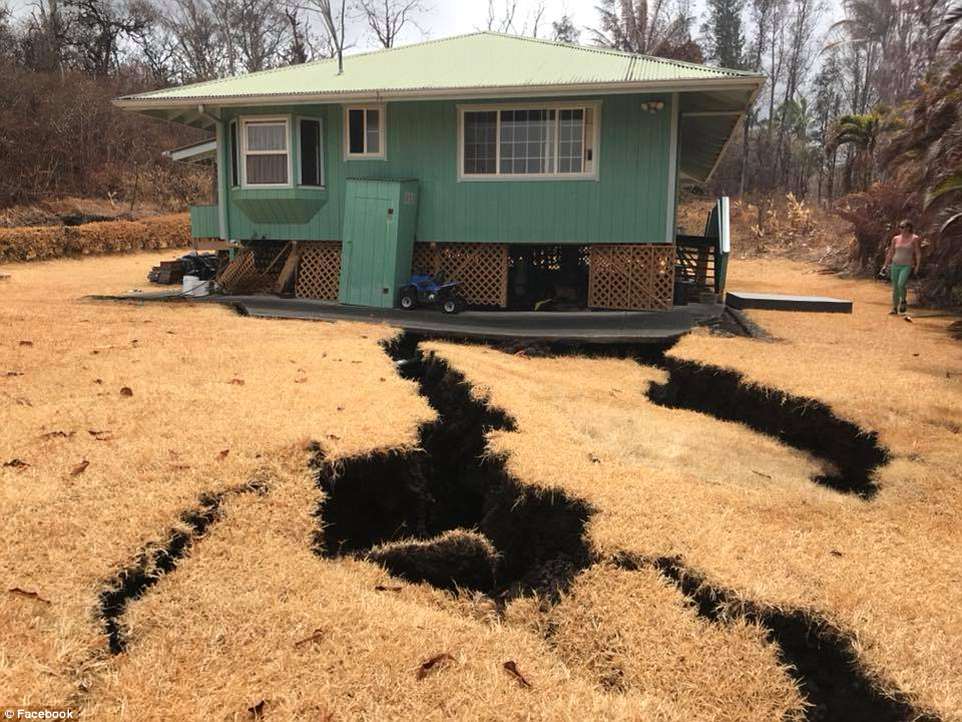 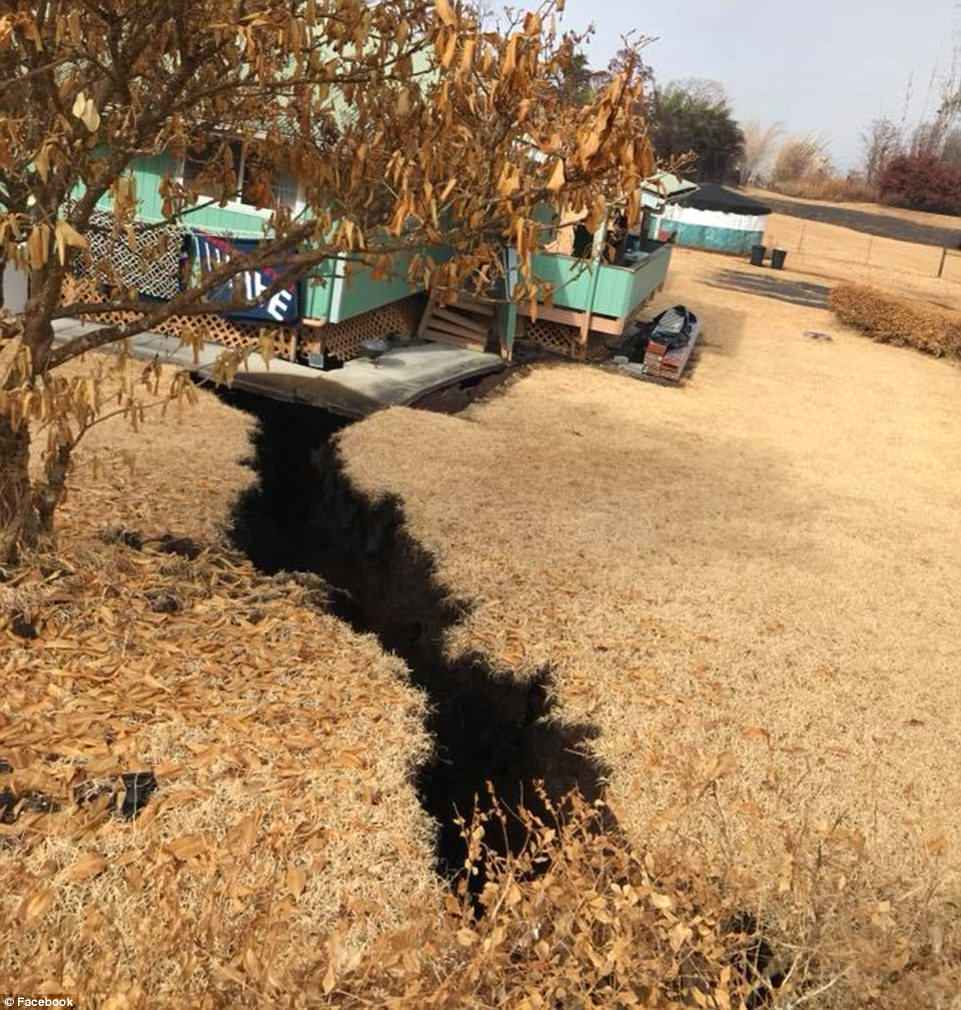 The huge crack runs 500-feet through the backyard and directly under the home, threatening to swallow the property whole

An estimated 2,000 residents have already been driven out of their homes in the last month as lava flows continue pour across the island, burning everything in their path.

Officials say 82 structures, including dozens of homes, have been destroyed by the lava, which has taken over 3.4 square miles of land in the Puna region.

On Thursday geologists said that after three weeks of escalating activity, Kilauea has entered a ‘steady state’ of eruption.

‘It’s probably going to do this for a little while longer,’ said US Geological Survey scientist Wendy Stovall on a conference call, describing the stage of the eruption as the ‘middle’.

Going into the fourth week of eruptions another 2,000 people living in coastal communities may be forced to flee as lava flows threaten to cut off their escape routes.

‘We now have the capacity to evacuate all of the estimated population of lower Puna south of the lava flow within a few hours,’ Brigadier General Kenneth Hara of the Hawaii National Guard said in a statement.

Up at Kilauea’s 4,091-foot summit there have been around 12 explosions recorded each day, spewing molten lava and plumes of volcanic ash.

Flows from at least 25 fissures created a new threat this week as they reached the Big Island’s coast and poured into the Pacific, creating a toxic cloud of acid and glass called laze. 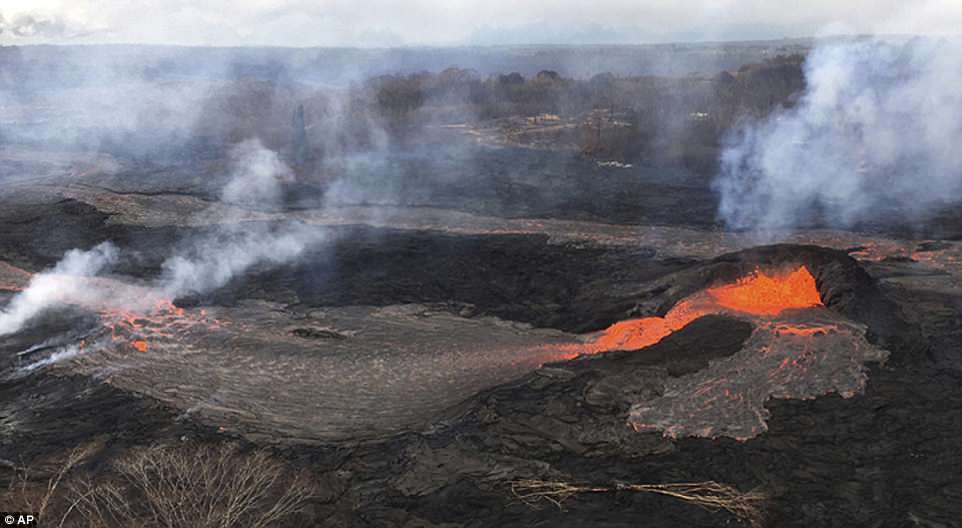 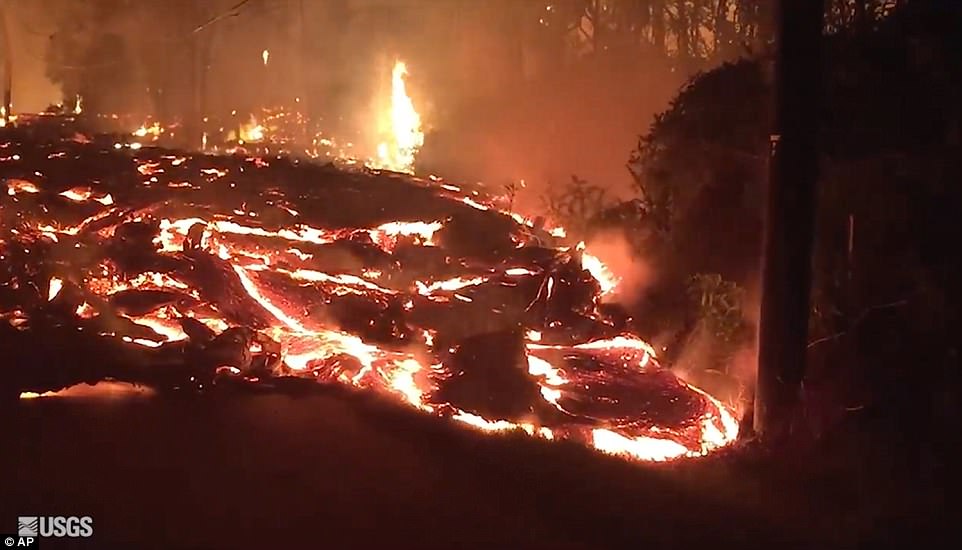 An estimated 2,000 residents have already been driven out of their homes in the last month as lava flows continue pour across the island. Pahoehoe lava can be seen flowing through the Leilani Estates in the early morning hours on Friday 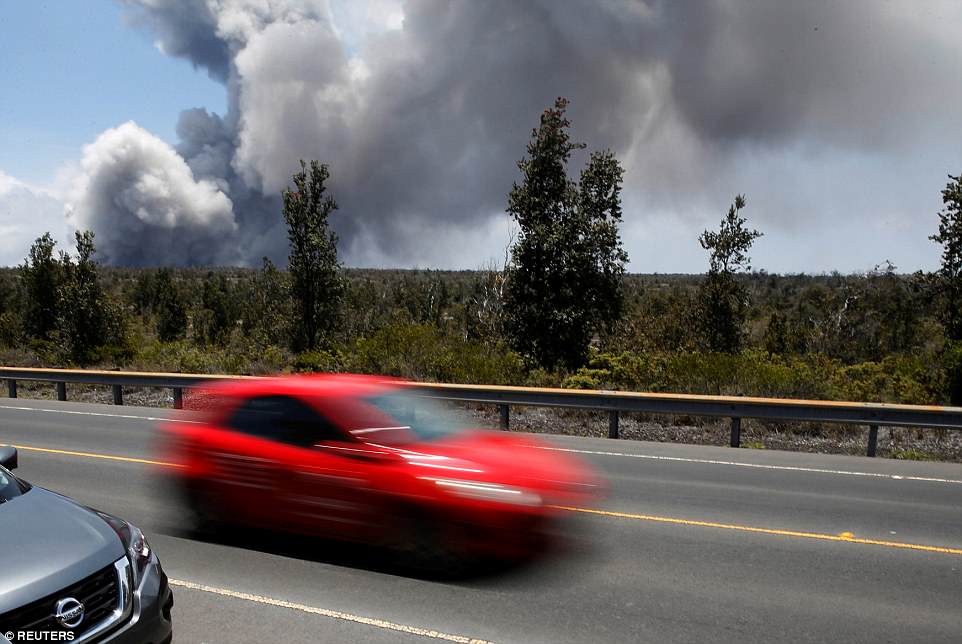 As a car dashes by, an ash plume rises from the Halemaumau Crater near the town of Volcano, Hawaii, on Friday afternoon 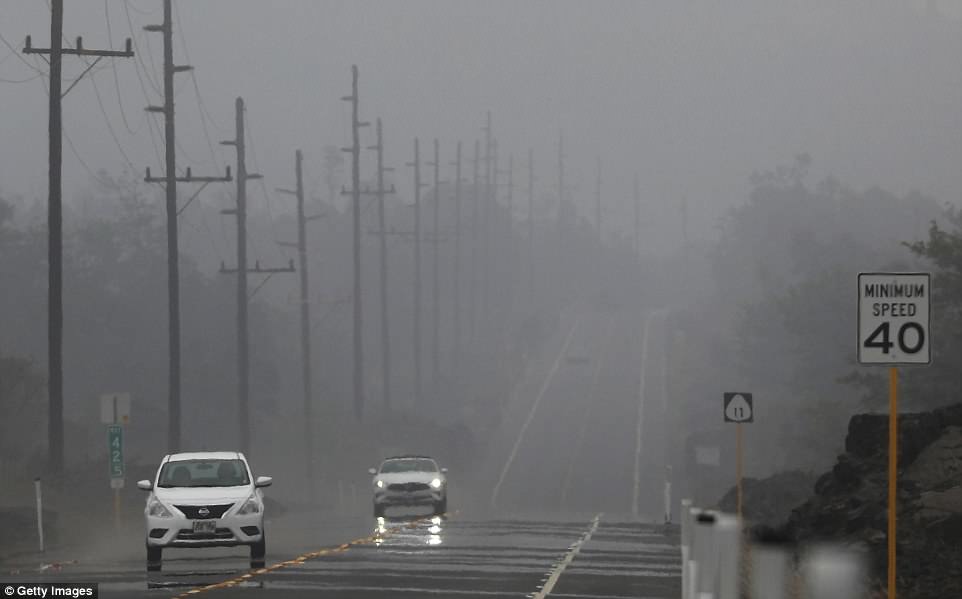 The 4.4-magnitude earthquake, centered in the summit region of the Kilauea volcano, triggered the eruption of an ash plume that shot at least 10,000 feet skyward, according to the National Weather Service. An ashy haze soon settled over the region 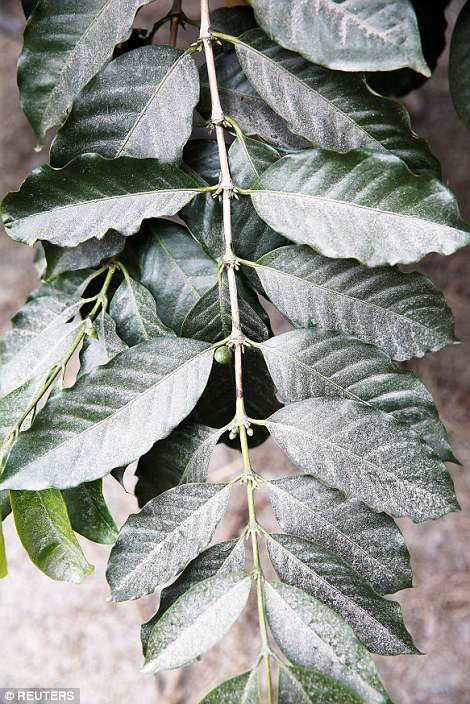 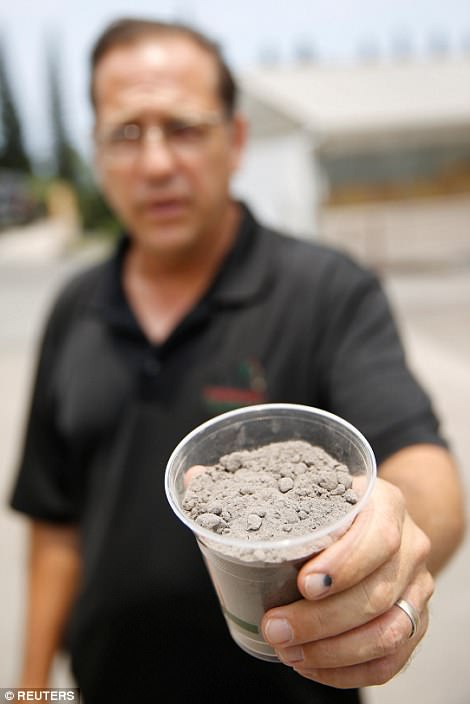