Six things you missed from day three of the Ashes Test

Alastair Cook ended the third day of the fourth Ashes Test on 244 not out as England established a lead of 164 runs over Australia to further boost their chances of averting a 5-0 whitewash.

The England opener batted magnificently as England chased down and then overtook Australia’s first innings total to finish the day on 491 for nine at the MCG.

As always, Sportsmail has rounded up some of the things you may have missed from the latest day of Ashes action.

COOK MOVES AHEAD OF THE GREATS

As well as answering the questions about his future in the England side, Alastair Cook further cemented his legacy with that unbeaten innings of 244 at the MCG on Thursday.

He moved past Mahela Jayawardene, Shivnarine Chanderpaul and Brian Lara to take sixth position in the all-time list of leading run-scorers in Test cricket.

Next in his sights is the 12,400 runs notched up by Kumar Sangakkara. 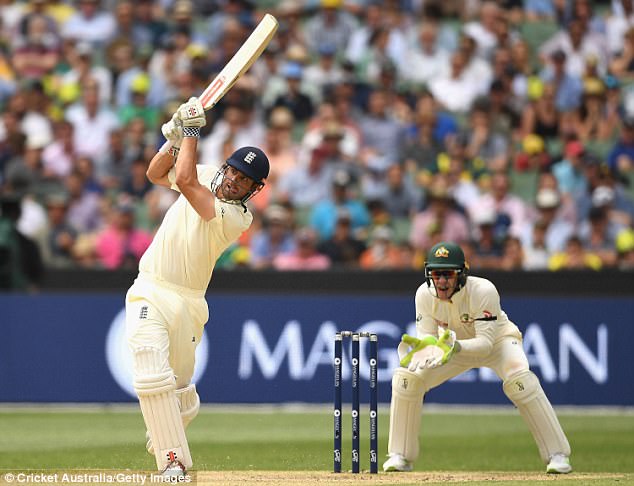 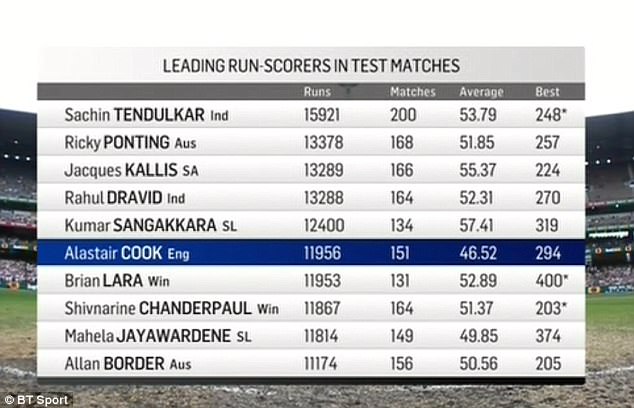 Some other records tumbled as Cook continued his serene progress to a double century and beyond on the third day in Melbourne.

He has set a new best for English batsmen in Test matches at the MCG, surpassing the 200 hit by Wally Hammond there back in 1928.

Talking of Hammond, Cook is the first England batsman to hit multiple double centuries in the same calendar year since Hammond did it 81 years ago in 1936.

Cook then set a new bar for the highest score by any overseas batsman in Test matches at Melbourne, beating the 208 scored by Viv Richards of the West Indies in 1984.

The former skipper now stands out on his own in the list of the most scores of 150+ for England in Test matches. That was his 11th, taking him ahead of the 10 achieved by Len Hutton, Wally Hammond and Kevin Pietersen.

It is also the first time Cook has carried his bat in 271 first class matches and the first time any England batsman has done it since Michael Atherton back in 1997. 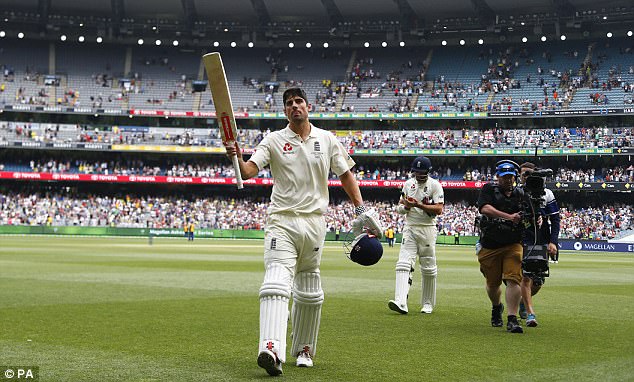 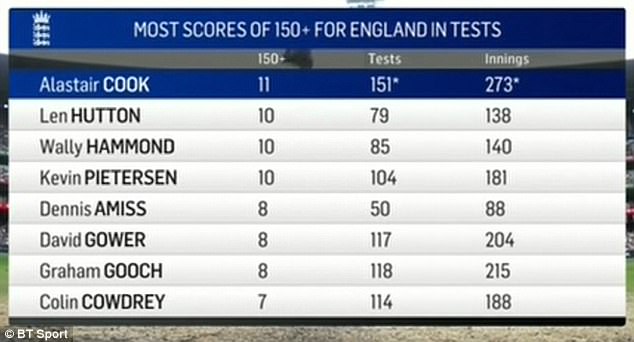 COOK IS THE MARATHON MAN

This is the fourth time Cook has batted for in excess of 10 hours in Test matches and is already the longest innings by any batsman in Australia since… Alastair Cook batted for 625 minutes to make 235 at the Gabba back in 2010.

Few batsmen are so comfortable with marathon innings and Cook kept it going with a brilliant ninth-wicket stand of 100 with Stuart Broad, who made 56.

This is only the second time in 113 matches that Cook and Broad have batted together. The first was against Pakistan at Sharjah in 2015. 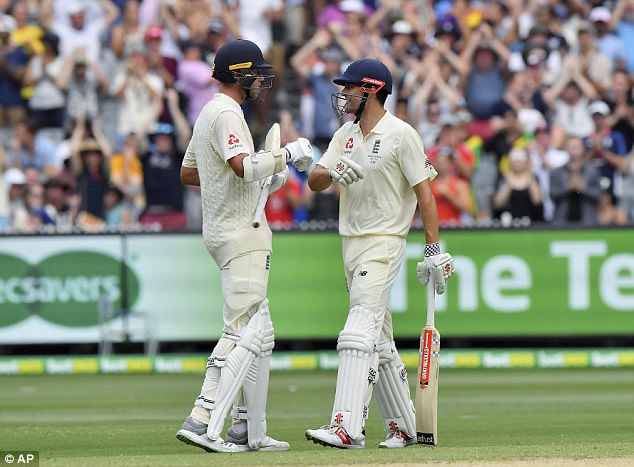 Dawid Malan was on 14 when given out lbw off the bowling of Josh Hazlewood and decided not to review the decision after a consultation with Cook.

Replays proved that to be the wrong decision, with hotspot showing a clear edge onto his pads that would have reprieved him.

Surely it was worth a review? Particularly given that James Vince was dismissed in the same circumstances earlier in the innings. 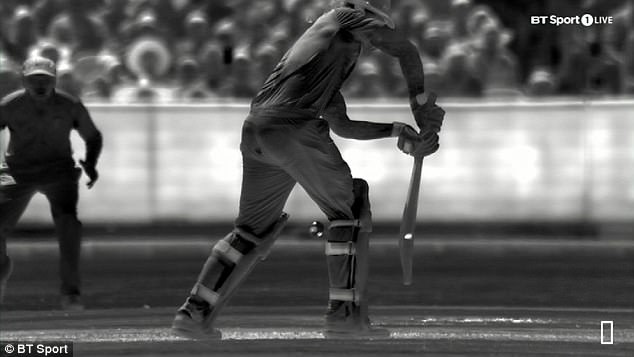 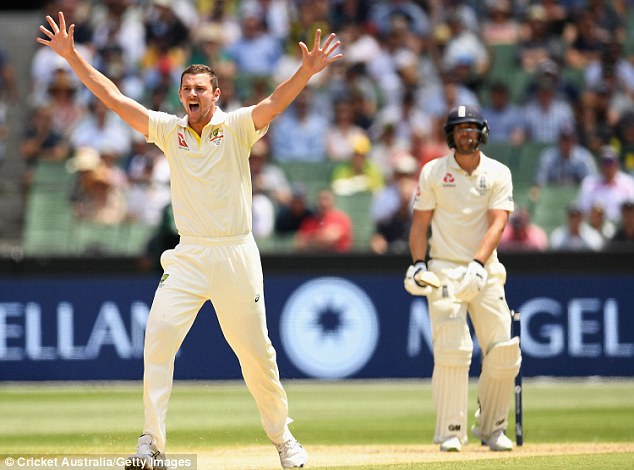 Josh Hazlewood appeals for the wicket of Malan, who was on a score of 14 at the time 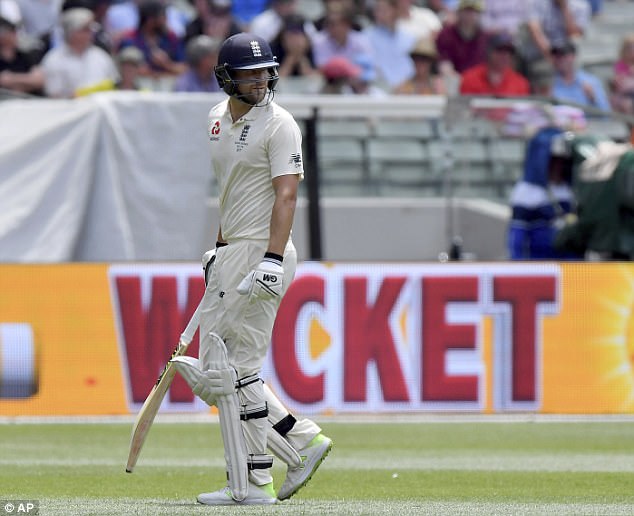 Stuart Broad’s swinging half-century brought plenty of entertainment during the evening session, but it was ended prematurely.

Broad, who amusingly picked up some grass and threw it into the breeze to measure the strength and direction of the wind when he arrived at the crease, top edged towards third man where Usman Khawaja raced round to take a diving catch.

Or we thought after the umpires gave the soft signal of ‘out’ before deciding to take a closer look.

The replays clearly showed that the ball slipped out of Khawaja’s grasp and hit the turf but because the soft signal had been given, Broad had to go despite all evidence to the contrary. 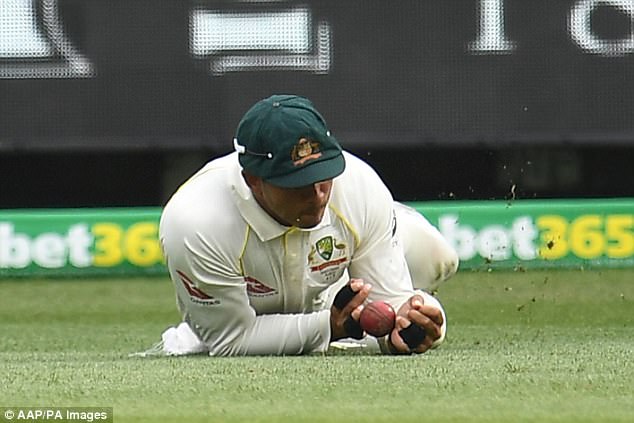 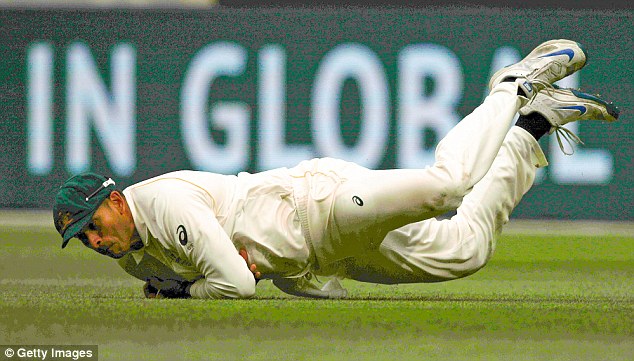 It was a day to forget for Australia bowler Jackson Bird, who went for 108 runs from 30 overs and failed to take a wicket.

And he was mocked mercilessly by the massed ranks of England’s Barmy Army every time he fielded in front of them at the MCG.

Reconditioning the ‘he bowls to the left, he bowls to the right’ song once used to serenade Mitchell Johnson, the travelling fans have a new man to mock. 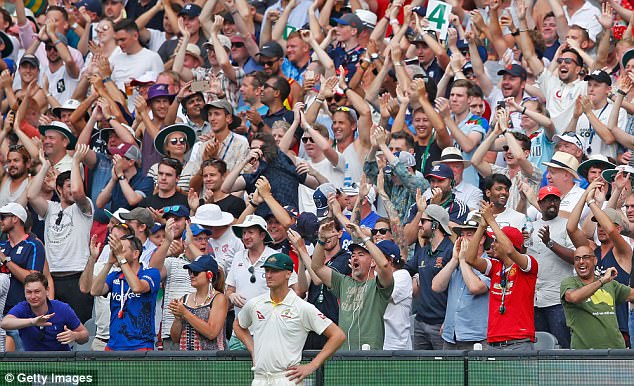 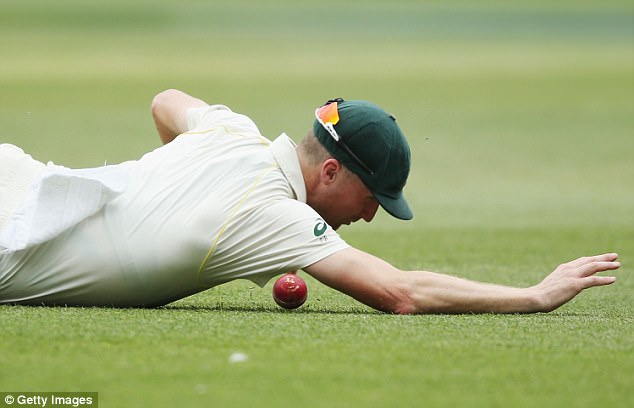 It was an innings to forget for Bird, who went for 108 off his 30 overs and didn’t get a wicket