A blazing comet that has travelled for 6,800 years was seen streaking over Stonehenge on a perfect summer’s evening.

Photographer Matthew Brown, 37, drove nearly three hours away from his home to get the landmark to capture the comet during the ‘clearest sky of the year’.

Formally named C/2020 F3, the comet was discovered in late March by the NEOWISE space telescope and will be visible with the naked eye throughout July.

On a spectacular evening, the rare Neowise comet could be seen as it came as close to 103 million kilometres away from earth.

The rare Neowise comet was seen streaking over Stonehenge on a perfect summer’s evening, coming as close to 103 million kilometres away from earth.

In a photo taken in the early hours of Saturday morning, stunning noctilucent clouds could be seen behind the comet which can only be seen for a few weeks a year during the summer 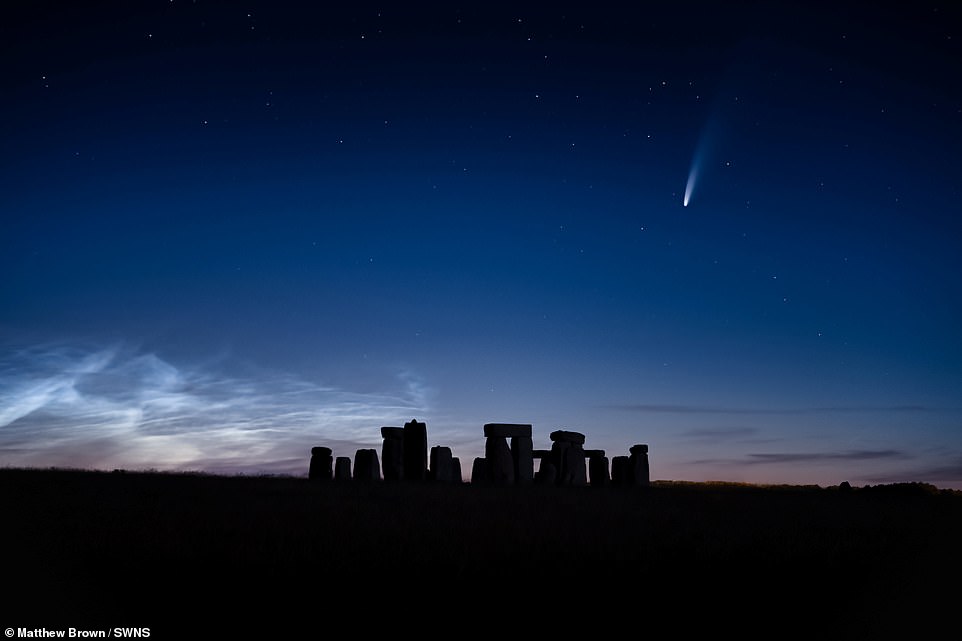 Photographer Matthew Brown 37, drove nearly three hours away from his home to get the landmark and pictured the comet at 10pm on Friday night

The photographer managed to capture the breathtaking shot of the comet flying over Stonehenge at 10pm on Friday.

The fireball shot through the sky on its once-in-a-6,800-year journey with the stunning Noctilucent clouds behind it.

Noctilucent clouds, or night shining clouds, are a cloud-like phenomena in the upper atmosphere of the earth consisting of ice crystals and are only visible during astronomical twilight.

To view the comet in the UK you’ll need to stay up late as it is best viewed at about 02.30 BST in the north-east sky anywhere in the country – just above the horizon.

The comet is currently millions of miles away from Earth and during its closest approach on July 23 will still be 64 million miles from the planet. 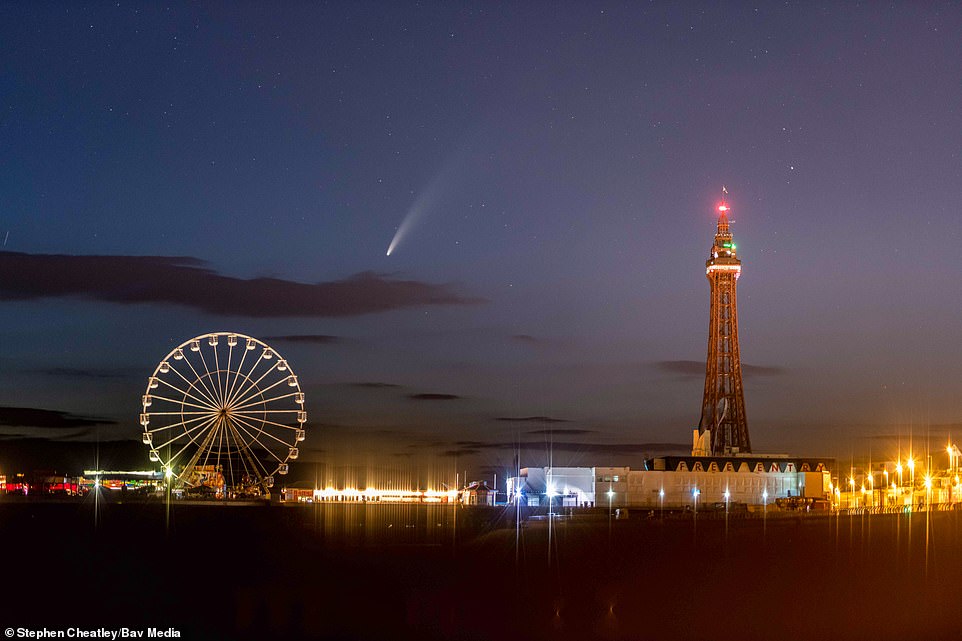 In the early hours of this morning, the comet could be seen in the sky over Blackpool as it passed the planet 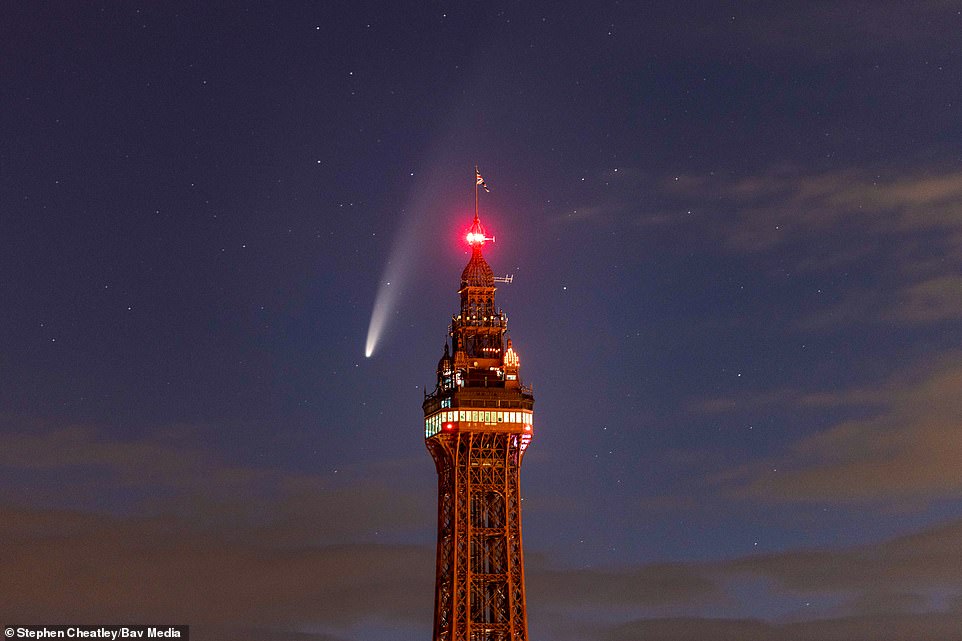 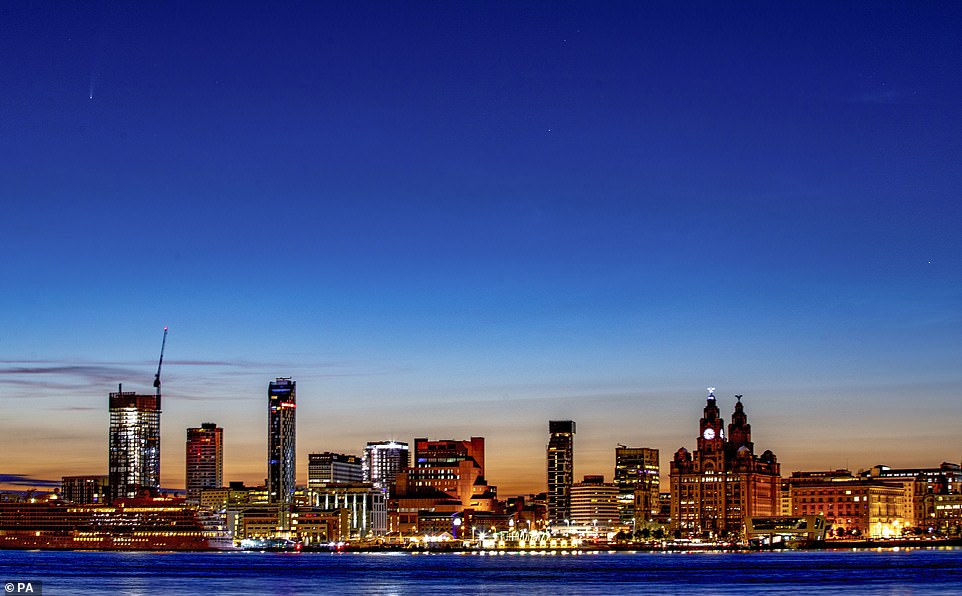 Comet Neowise soared through the sky over Liverpool’s waterfront in the early hours of this morning. It can be seen in the top left of the sky 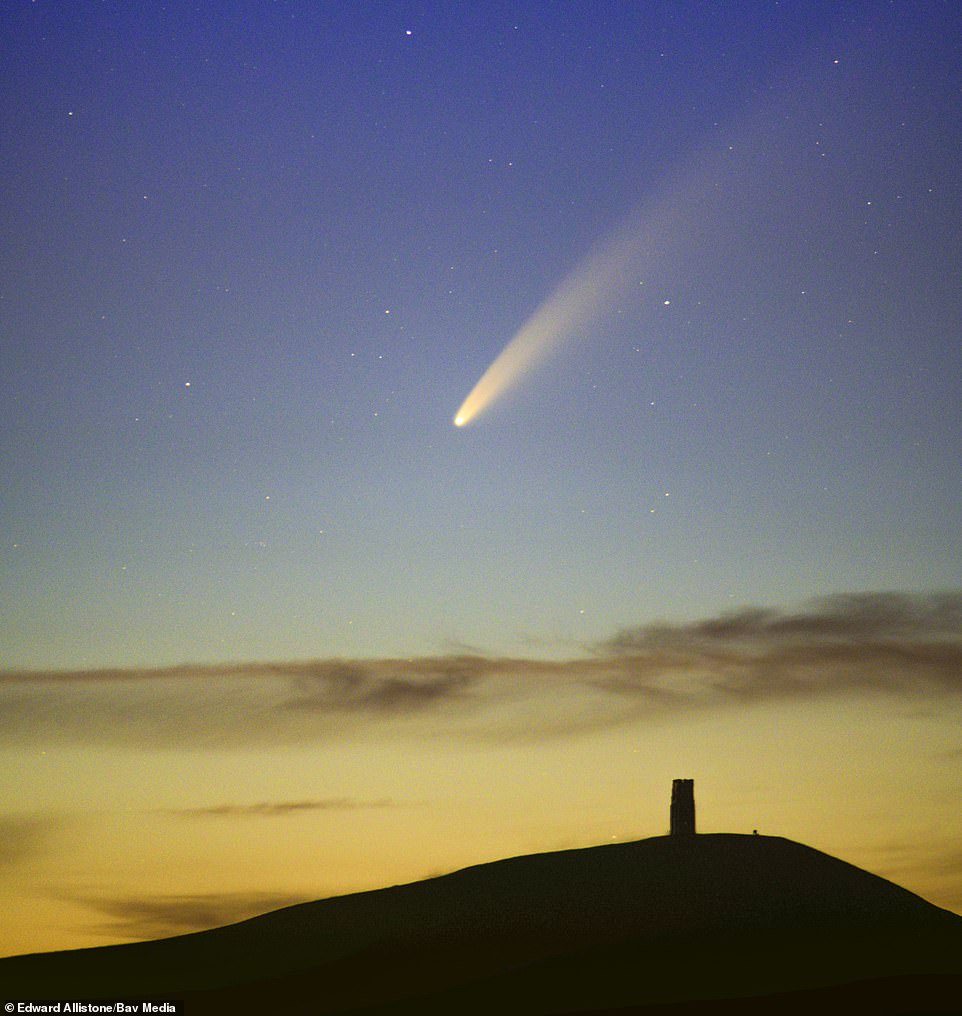 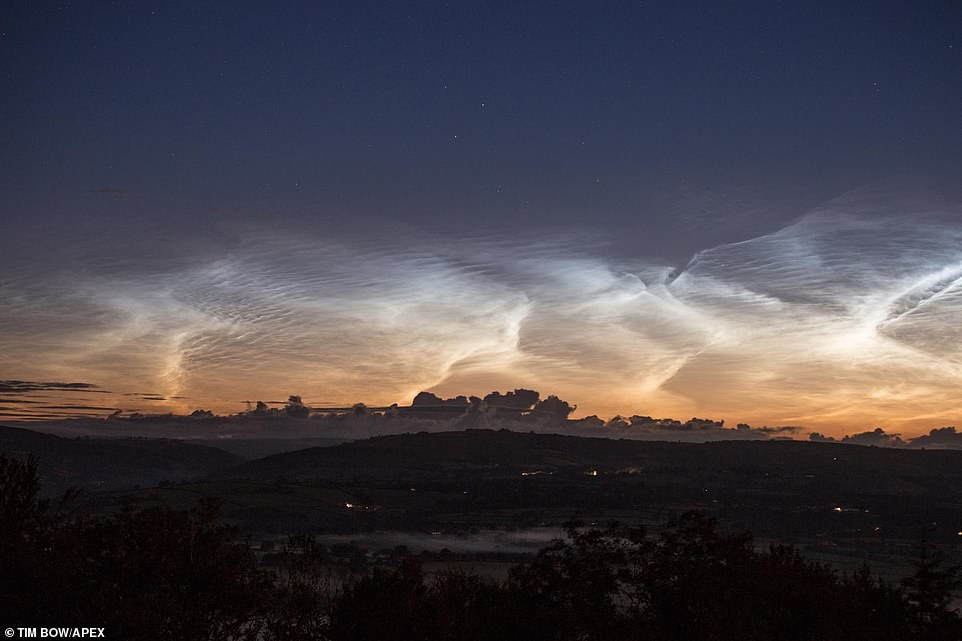 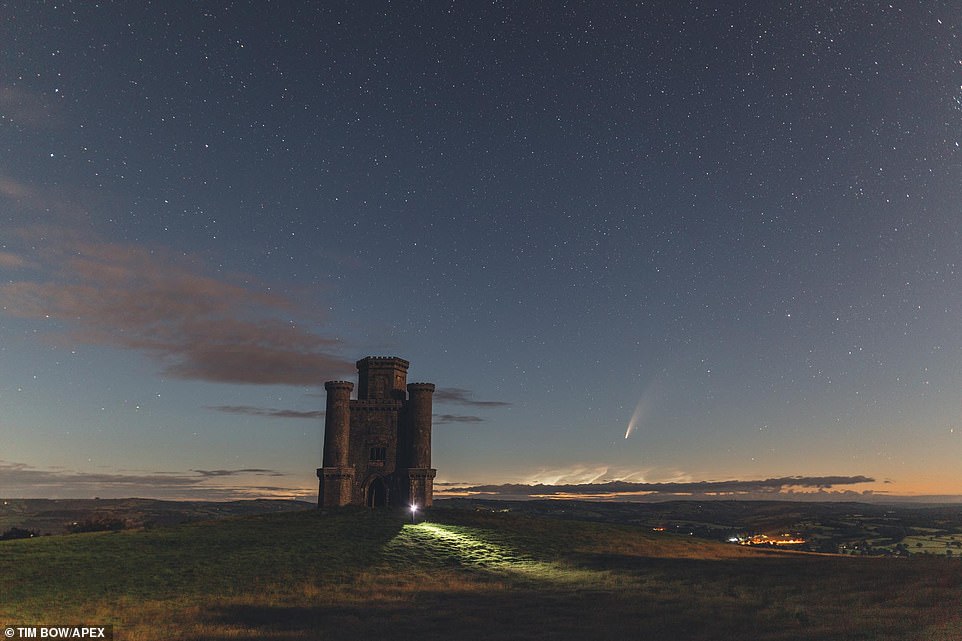 Near Carmarthen, Wales, the comet soared through the sky near the horizon behind Paxtons Tower

The photographer, from Carmarthen, Wales, said: ‘I’ve taken thousands upon thousands of shots during my career but this has to be one of my favourites.

‘I knew it was going to be one of the clearest nights we had so I had to make my way there.

‘I live in Carmarthen, I thought it was now or never for me to head there and get myself a photo of a lifetime.

‘I was so happy when I got there because it was simply breathtaking.

‘When I parked up and I saw the clouds I was just amazed. 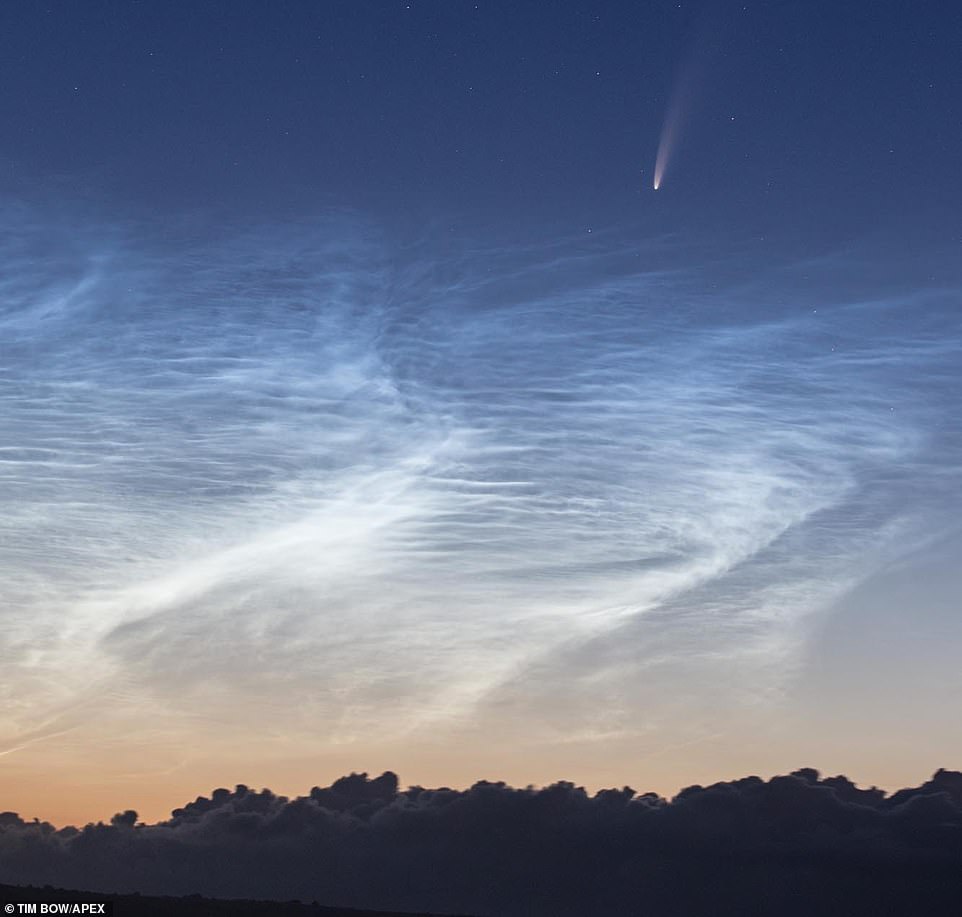 The comet could be seen over Paxtons Tower near Carmarthen, Wales, and the stunning noctilucent clouds lined the sky 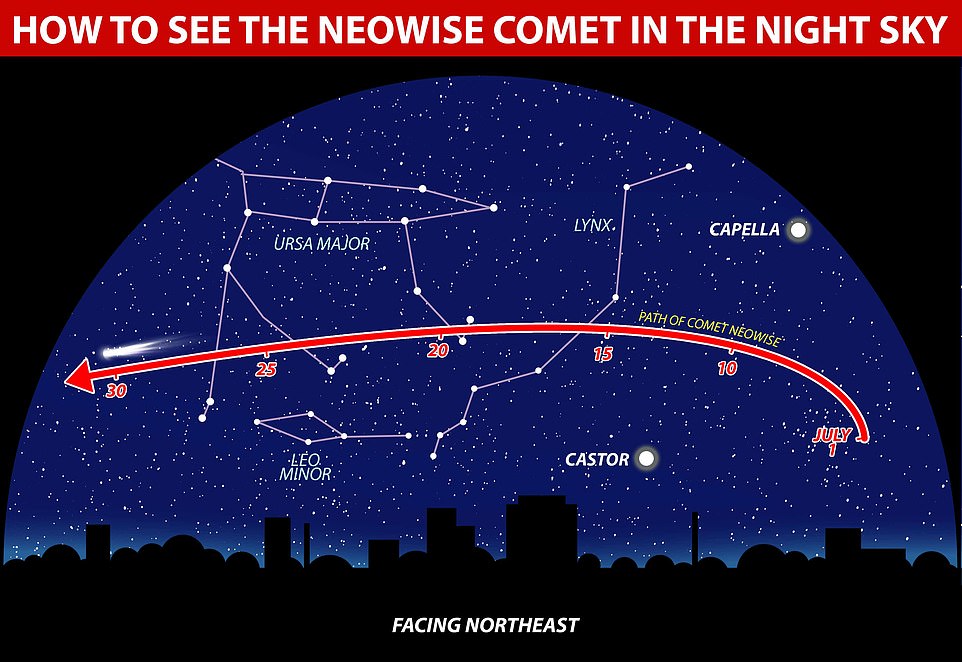 To view the comet in the UK you’ll need to stay up late as it is best viewed at about 02.30 BST in the north-east sky anywhere in the country – just above the horizon – and is near the stars Capella and Castor

‘I am a professional photographer so I shoot a lot at all hours of the day, but the sky that night was spectacular.’

The photographer drove more than two and a half hours to get to Stonehenge to capture the brilliant pictures.

The married dad-of-one added: ‘It was absolutely worth it. I’d have kicked myself if I hadn’t gone and missed out. The pictures are showing something so unique. 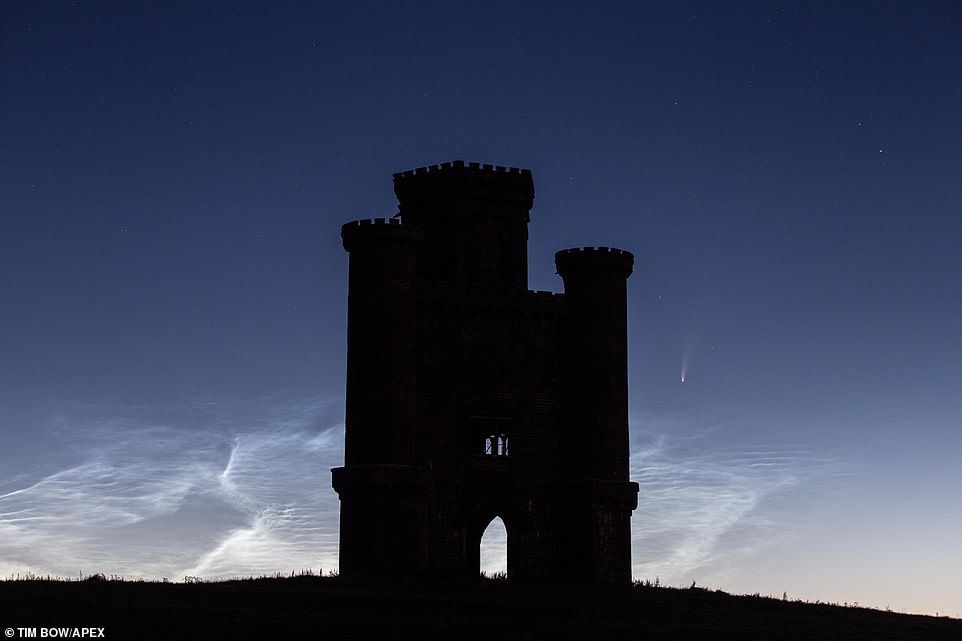 ‘You’ve got the comet, the noctilucent clouds, which only appear a couple of weeks a year during the summer and you’ve got this clear sky.

‘It’s not something you see often and to see it all at Stonehenge made it special.’

A comet is an icy, small Solar System body that, when passing close to the Sun, warms and begins to release gases, a process called outgassing.

This produces a visible atmosphere or coma, and sometimes also a tail.

Another photographer, Nick Jackson, spotted the comet as it shot over Titterstone Clee Hill Radar.